For Carlos Curbelo, there was no single moment when he decided to start taking climate change seriously. Instead, as he describes it, it was a slow drip, one impossible for the Republican Congressman to miss in his South Florida district, which encompasses the Florida Keys, the Everglades, and southwest Miami-Dade County.

There are the increasing King Tides that spill seawater onto roads and yards, sometimes gurgling up through manhole covers, even on rainless sunny days. There are worries and reports of saltwater intrusion, as seawater creeps into underground aquifers and threatens drinking-water supplies. And there are the costs borne by local communities forced to install sophisticated pump systems, elevate roads, and erect coastal infrastructure to resist sea-level rise.

Where he’s from, there’s no denying that climate change is real, it’s manmade, and its impacts are not some far distant threat, but already manifesting.

“For me, it’s the daily observation of what’s happening in our community. It’s starting to have a real impact on people’s lives,” Curbelo told Audubon over the phone last week. “This is not an academic discussion for those of us who live in South Florida. This is a local issue that is becoming a local challenge, but that also requires national and global action.”

Now, the 38-year-old Congressman is taking his local problem to the national stage. Today he introduced legislation to Congress—called the MARKET CHOICE Act—that would eliminate the gas tax and replace it with a tax on carbon emissions, starting at a rate of $24 per metric ton and increasing each year.

Such a carbon tax aims to make fuels that spew greenhouse gases more expensive to reflect their societal cost—in property damage, healthcare, and food prices, to name a few examples—and to encourage the use of low- and no-emission fuels. “We know that there’s a cost of carbon-dioxide emissions; it’s just not acknowledged in the market. It’s hidden right now,” Curbelo says. Currently, that cost is being paid by communities like Miami—the U.S. city with the most people and economic assets at risk to sea-level rise—and others coping with acute heat, drought, wildfires, and hurricanes.

Curbelo’s carbon tax would make major inroads toward reducing carbon emissions at a national scale, thus curtailing the extent of those climate impacts, according to economic models by Resources for the Future and Columbia University/Rhodium Group. With the tax in place, emissions are projected to fall 27-32 percent below 2005 levels by 2025 and 30-40 percent below 2005 levels by 2030. By contrast, under current policy, greenhouse gas emissions are on track to decline by 15-19 percent by 2025.

“While the price is lower than we might hope, it results in serious emissions reductions—reductions that very respected modelers suggest would be on par with our national contribution to the Paris Accord,” says Sarah Greenberger, National Audubon Society’s senior vice president for conservation policy. "That’s a much better place than where we are now."

When Curbelo, the son of Cuban immigrants who fled Fidel Castro’s regime in the 1960s, first ran for office in 2014, climate change was nowhere near the center of his platform. The race between him and incumbent Joe Garcia (D) largely consisted of back-and-forth corruption accusations—a fact Curbelo blames on the influx of outside money that poured into both campaigns in the hotly contested district, swamping either candidate’s own fundraising. Curbelo won 52 percent of the vote to Garcia’s 48 percent.

Compared to his South Florida district, Congress was hardly fertile ground for climate action—or even climate acknowledgment. “I was alarmed when I got here to Congress in 2015 and found there were so few Republicans who were even talking about this issue,” Curbelo says. He began researching climate science and policy, and credits a meeting with NOAA officials, who patiently answered his many questions, for crystallizing his focus on the need to depoliticize climate change and create an environment where Republicans can speak out about it.

To that end, in February 2016, Curbelo with Rep. Ted Deutch (D-FL) founded the Climate Solutions Caucus to bring Democrats and Republicans together to explore climate policies. If a Representative wants to join the caucus, they have to bring along a colleague from across the aisle to enforce bipartisanship. “Everyone who cares about environmental policy knows that in order for the solutions to be lasting and effective, they must be bipartisan,” he says. Today, the caucus stands at 86 members: 43 Democrats and 43 Republicans.

Left: Road construction work in Miami Beach, FL, for a project to raise the street level to reduce tidal flooding. Photo: Scott McIntyre/The New York Times/Redux; Right: Tidewater is pumped back into a canal near the Venetian Causeway entrance from Purdy Avenue, where the seawall is also being raised, during a seasonal king tide in Miami Beach, FL. Photo: Max Reed/The New York Times/Redux

The caucus can claim one meaningful victory. In July 2017, 46 Republicans, including 22 Republicans then in the caucus, joined all House Democrats to save a Defense Department study on the national-security impacts of climate change. Largely, though, the caucus is criticized for letting Republicans earn some climate-change bona fides despite voting otherwise. Just last week, the House voted on a resolution denouncing the idea of a carbon tax (likely to preemptively counter Curbelo’s bill); only six Republicans, four of them caucus members, voted against it.

Still, it’s an improvement over 2016 when a similar resolution was introduced and zero Republicans dissented.

For his part, Curbelo has not been afraid to speak his mind. He called withdrawing from the Paris Agreement a “strategic mistake.” He voted yes on a resolution in favor of Obama’s controversial plan to have the EPA regulate carbon emissions from coal-fired power plans. (“If it’s this or nothing, then I’m for this,” he told Time.) He was one of 12 House Republican to denounce a provision snuck into the 2017 budgeting process that opened the Arctic National Wildlife Refuge to oil and gas drilling. (He ultimately voted for the budget with the provision intact.)

Critics say he’s all talk and no action: In 2017, he voted against pro-environmental policies 77 percent of the time, according to the League of Conservation Voters. (They note, though, that the Congressman missed multiple votes in September while the state was preparing for and dealing with Hurricane Irma.)

“There are naysayers on the left,” says Greg Hamra, leader of the Miami chapter of the Citizens’ Climate Lobby and member of its conservative caucus. “But he is talking to other members of Congress, Republican members, and helping them muster the leadership and courage to be part of necessary bipartisan solutions that we need.”

Whether they’ll have the courage to vouch for his carbon tax remains to be seen; it has the support of at least one—Brian Fitzpatrick (R-PA), a caucus member, who co-sponsored the bill. Still, Curbelo’s bill clearly aims to anticipate and counter pitfalls that have undercut past carbon-tax proposals. He met with policymakers and modelers regularly while putting the bill together, and the result is a hodgepodge that has something for everyone—and also requires concessions from everyone.

Most of the tax revenue (70 percent) would go toward building new infrastructure through the Highway Trust Fund, and would fund it at higher rates than the gas tax does currently. (The carbon tax would pull in $57-72 billion more than the gas tax in 2020, according to the Columbia model.) “We’ve really tried to capture the political energy of the moment,” Curbelo says. “We know there’s a lot of support for infrastructure investment in our country.”

The remainder would support a diverse array of programs. Crucially, it would reimburse those poorer households most affected by the price hike on their electricity bill, estimated at $275 in 2020. “Places like Washington State that have a very clean electricity system won’t see much of a change, but places like the Midwest or the South that use more coal-fired generation will see larger price increases,” says Marc Hafstead, who led the economic modeling for Resources for the Future. Ten percent of tax revenues would be redistributed to low-income households (below 150 percent of the poverty line). The remaining funds would provide job training to displaced workers and invest in coastal resilience and energy research, among other targets.

Many conservatives who favor a carbon tax would prefer that all revenues be redistributed instead of funding new programs. “Make fossil fuels pay their cost to society, and then let them fight it out [with renewables] in the marketplace,” Hamra says. So the legislation sweetens the deal by placing a 12-year moratorium on the EPA’s power to regulate greenhouse gases from stationary sources. Conservatives have long sought to diminish the agency’s regulatory power; liberals have long protected it. 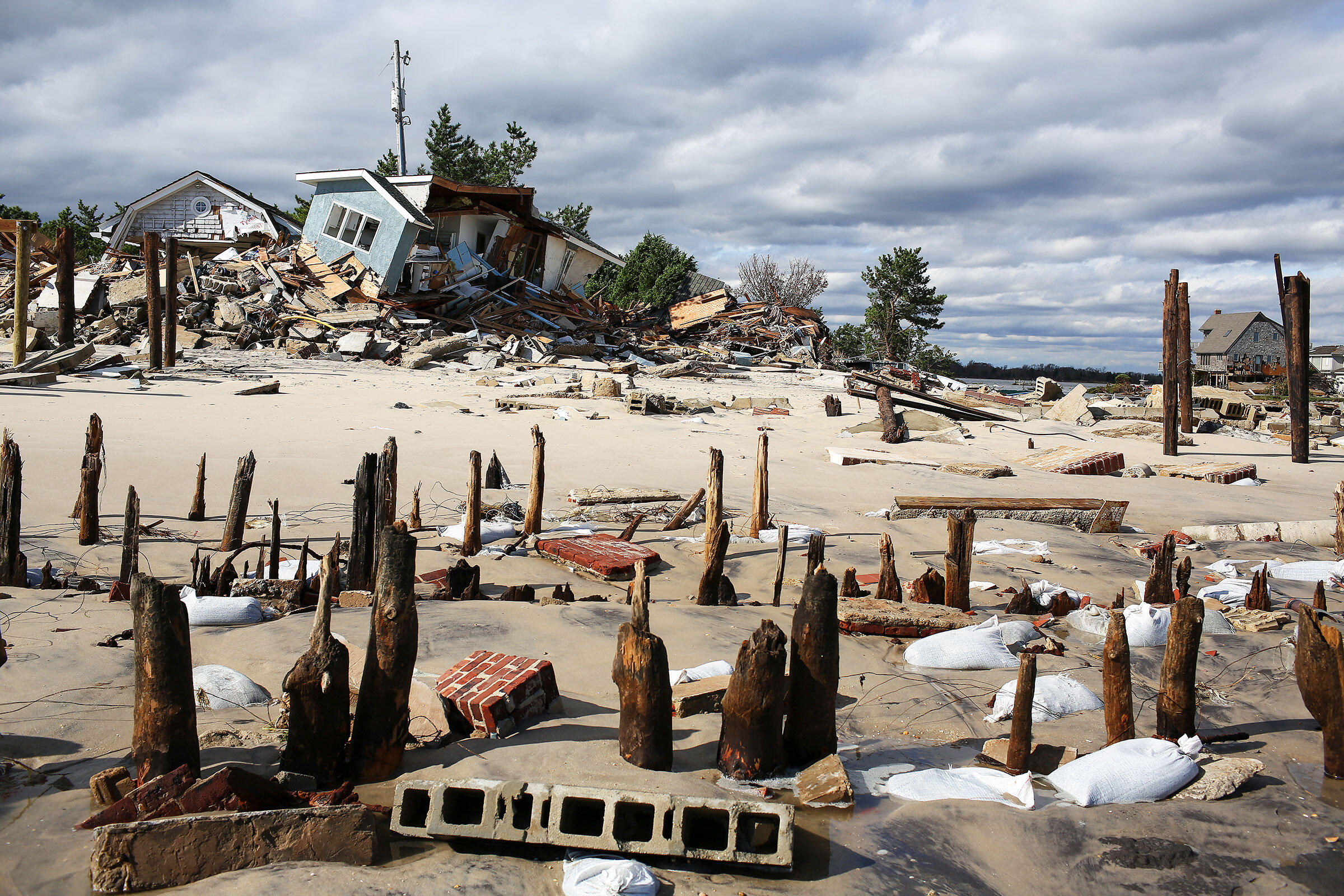 The ruins of the beachfront boardwalk and houses in Mantoloking, NJ, destroyed by Hurricane Sandy. Photo: Andrew Quilty/Oculi/Redux

Finally, there’s a built-in insurance policy. The bill sets annual targets for carbon-emission reductions and each year, if those targets are missed, the tax rate ratchets up by 2 dollars. If the targets are still being missed at the four- or eight-year marks, the EPA moratorium would be lifted. “That should help appease groups from the left who are worried that a carbon price would be ineffective,” Hafstead says.

No one, not even Curbelo, expects the bill to pass this year. But it’s still valuable, Greenberger says, because it could force the climate conversation to progress from debates over whether it’s happening (it is) and manmade (also yes) toward solutions.

“We hope it’s a serious shift in focus of the debate,” she says. “It asks questions that should be debated from a variety of perspectives. What is the right price? Where should the revenue go? Is it acceptable to think about a moratorium on EPA authority in exchange for action now? Those are hard questions, but they’re worth discussing and considering.”

The legislation has been introduced months before Curbelo faces tough reelection prospects. His district is the most Democratic of any currently held by Republicans up for election, and some suggest the carbon tax is an attempt to curry favor with voters. But to hear him talk of it, he considers it his duty to serve as a model for how conservatives can make progress on climate change without betraying their principles.

“We need to be focused on solutions and on answers, and that’s the driving force behind my work,” Curbelo says. “For us to ignore this, to look the other way while the situation continues to deteriorate, is just reckless and negligent. I’m simply doing this because I believe it’s the right thing to do.”