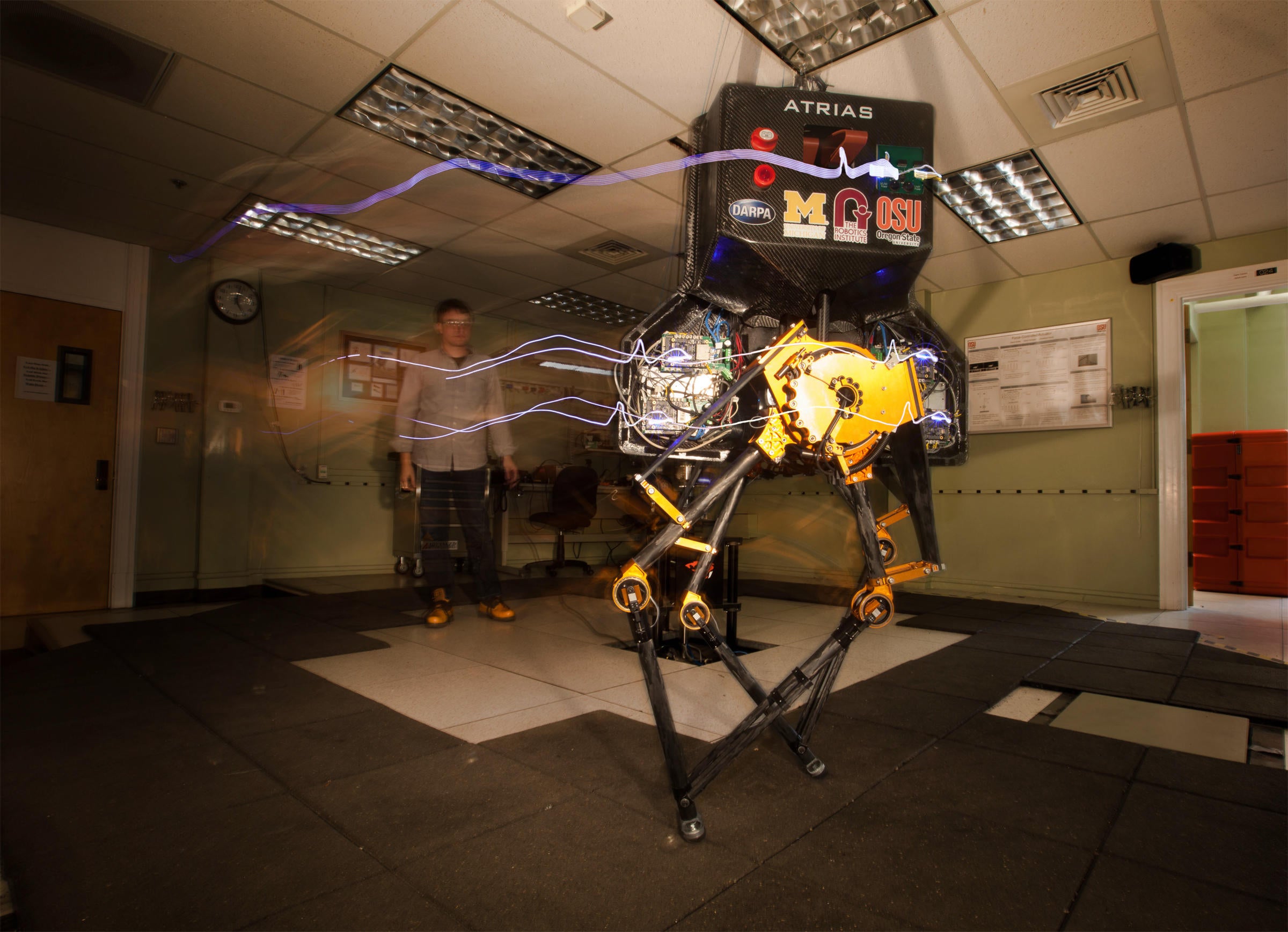 Robotic Ostrich to the Rescue

Running birds are paving the way for better walking cyborgs.

When disaster strikes, will a robotic Ostrich come to save you?

Robotic engineers are trying to create better bots that can navigate through rough terrain. It turns out that the best inspiration for this kind of tough cyborg might be the tallest bird.

Walking robots have been around for a long time. Two-legged, or bipedal, models can already run, hop, and climb stairs. But simple obstacles such as pits and debris—hiccups in the landscape that animals maneuver effortlessly—can bring existing robots crashing down.

Engineers trying to perfect robotic walking are studying the movements of bipedal animals. Many of these creatures, like apes, bears, and lizards, can run or walk on two legs, but often use a four-legged gait for better balance or speed. Ground birds are the only land animals besides humans to both run and walk on two legs. They may be even better at negotiating obstacles than humans.

That’s why scientists turned to quail and ostriches when designing a robot named ATRIAS, which stands as tall as a human, fidgeting atop two scrawny legs. Funded by the Defense Advanced Research Projects Agency, engineers outfitted ATRIAS with a set of bouncy, bent legs and a stout upper body. Skinny springboards reduce shock, so each step the robot takes is more of a bounce than a collision. The robot can also withstand obstacles and physical blows without losing its balance. By incorporating the mechanics of bird athletics into this new gadget, engineers are making a machine that may one day be able to bounce out of a pothole.

“We studied birds because they are truly capable runners, able to handle highly variable terrain easily,” says Jonathan Hurst, director of Oregon State University’s Dynamic Robotics Laboratory (ATRIAS’ creator). On uneven terrain, ground birds run with consistent leg posture, a strategy that minimizes leg injury while maintaining high speeds. “Birds are an excellent bipedal animal to study, as there is a large size range, from small quail up through Guinea Fowl, turkeys, and Ostriches,” he adds.

The avian inspiration has paid off so far, with ATRIAS well on its way to handling obstacles like a bird. “ATRIAS is the first machine to reproduce the dynamics of animal walking,” Hurst says. Even though it’s still nowhere as fast as a running Ostrich (which can clock in at 40 mph), it can remain upright even when kicked.

ATRIAS will make its official debut during a live walking demonstration at the DARPA Robotics Challenge held this June in Pomona, California. With $2 million on the line, this competition will showcase other disaster-response robots that can walk, open doors, drive tractors, climb over rubble, and cut walls open. As a guest of honor, ATRIAS won’t attempt the tasks during the event (it's just a walker, not a do-er at this point.)

But if there’s a surprise game of robot dodge ball, it might just show everyone up by staying firm on its two feet.