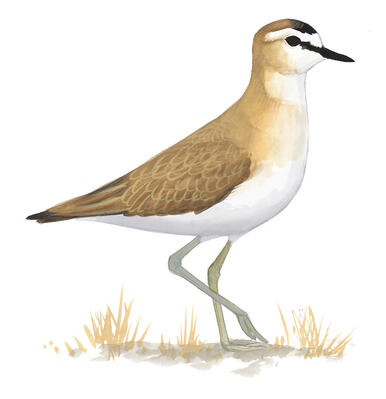 There’s a tiny chance that at any moment during a baseball game you’ll be forced to deal with a foul ball: a rock-hard leather sphere hurtling toward your face. It's a prospect at once terrifying and exciting. You could end up with a sore lump on your skull, sure, but you could also come home with a rare prize that advertises your luck, reflexes, and athleticism.

Then there's the foul ball I caught. I was a kid at a Red Sox–Orioles game watching batting practice, and the guy next to me managed to snag two balls. He tossed the second one to me. I was ecstatic.

Except, if you ask me where that ball is now, I couldn’t tell you. As cool as it was to get a real ball, I never really felt attached to it. I didn't have to work to get it. Some guy just handed it to me. Without the whole “leather sphere hurtling toward my face” part, it was just another piece of sporting equipment lying around the house.

Now replace “baseball” with “bird” and “hurtling toward my face” with “searched for hours across a baking-hot desert” or “got seasick three times on a pelagic trip” and I can finally get to my point: The satisfaction of finding a bird is often related to the effort you put into finding it or the anguish you experience along the way.

Every year I plan a trip somewhere in the U.S. with birding friends to seek birds we've never seen before. We chase down all the birds ourselves—save for the occasional staked-out rarity—and do all the work of researching, planning, and good-old-fashioned birding to get our lifers. It’s easily the most fun I have all year.

Planning your own trip means getting to choose your own itinerary. You get to eat wherever and whenever you want. You get to decide how to spend your time, whether that means lingering at a place you like or splitting from one you don’t. You listen to whatever music you want in the car.

It also means relying on your own wits to find and identify everything you’re looking for. The freedom in that self-reliance is invigorating.

The other option is to hire a guide. I totally understand the benefits of hiring help. There’s a better chance you’ll actually find the birds you’re after, and that you’ll identify them correctly. I don’t begrudge anyone that pleasure. In unfamiliar countries or places where you don’t speak the language, hiring a guide is sometimes a necessity.

However, if you’re in a place where you feel comfortable or are looking for more adventure, trust me, just try it once on your own. Catch your own foul ball.

There is just one thing you really need to do if you’re not going to hire a guide: Plan the heck out of your trip in advance. You need to have as much detailed information as you can dig up to make sure you get those birds. If that sounds intimidating, I can help.

It’s a little tool I like to call the Inverse-pyramid Bird Information System, or I.B.I.S.

Just because you’re not hiring a guide doesn’t mean you shouldn’t use every other resource in the birding universe to give you the best shot at getting the birds you’re after. There is sort of an inverse pyramid of research that needs to be done when you’re going to find a specific bird, starting with the most general information (the wide bottom—err, top—of the upside-down pyramid) and narrowing down to as much detail as you can get. It’s a little tool I like to call the Inverse-pyramid Bird Information System, or I.B.I.S.

As an example of I.B.I.S. in action, let’s talk about the prep my group did to land one of the dozen-or-so target species we sought on our trip to southern Arizona this past January: the Mountain Plover.

The wide-topped first step on I.B.I.S., performed before we even settled on Arizona in January, was examining eBird data on Mountain Plovers over a wide geographic area and timeframe. We needed answers to very fundamental questions, such as: Are there Mountain Plovers in southern Arizona in January? Thankfully, yes, eBird showed us that there are frequently Mountain Plovers seen in January in the agricultural areas between Phoenix and Tucson, known as the Santa Cruz Flats. That gave us enough information to plan the trip and make any necessary travel arrangements. Good start.

Then we ever-so-patiently waited until a few weeks before we set off to take on the next, more specific I.B.I.S. step: Are Mountain Plovers currently being seen in southern Arizona, right before we're scheduled to arrive? eBird is still probably the best tool for this question (the red pins on an eBird range map are sightings reported within the past 30 days), but local listservs are also great resources. Again, as we headed down to Arizona we could see that other birders had Mountain Plovers in the Santa Cruz Flats. That let us know we were still in good shape and didn't need to do any rerouting.

When we got to Arizona and actually started cruising the Santa Cruz Flats looking for Mountain Plovers, a more detailed run of I.B.I.S. kicked in, which was knowledge about how to identify a Mountain Plover. We knew the birds were out there somewhere on these huge agricultural fields, but how would we be sure we were looking at a Mountain Plover and not a Killdeer? Or a Buff-breasted Sandpiper? Did we know what the call sounded like? There are lots of field guides and other good resources for that knowledge (including right here on this very website), and you should have that stuff locked and loaded. It's a bummer to finally be out in the field and see your target species—or maybe it's not your target species; you aren't sure because you forgot to study up first. Rats.

The final step in I.B.I.S., the smallest and most pointed, is often the most important for finding your target bird: collecting extremely detailed information about the exact individuals you’re seeking and the area where you’re looking. For example, “the birds can be found at Johnson Park” isn’t good enough. If possible, you need something more like “the birds are found in the maples in the northeast corner of Johnson Park next to the baseball field, most reliably at dawn.” Again, eBird and listservs can help with this.

Not having such details almost cost us our Mountain Plovers. We got to the fields we knew they’d been frequenting, but we then spent two hours scanning without luck. We eventually ran into some other birders who told us the flock had moved a few fields over, where we found them easily (success!). Without that last crucial bit of detailed information, we might have missed the birds.

And that takes us to our final lesson: Your preparation can only take you so far. Out there in the field, luck, intuition, and a willingness to approach random birders are often needed to get your bird. Asking other birders you see, as we did, is always great, but sometimes there isn’t anyone around. Then, you’ll have to rely on your own research, wits, and birding ability to find what you’re after. That anxiety is the leather sphere hurtling at your face. Catch it and you’ve got your life bird. But to feel that excitement and satisfaction, you’ve got to try birding on your own.