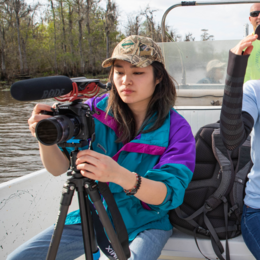 This February, when I told my friend I was traveling to the Gulf Coast to see Whooping Cranes, she instinctively asked, “Is that some kind of construction crane?”

To be fair, I can understand her confusion. I grew up in Dallas, Texas, a rapidly growing city where encountering looming metallic contraptions was a daily occurrence; seeing a Whooping Crane in person, however, not so much. As part of Audubon's social media team, I couldn’t pass up the opportunity to attend the annual Whooping Crane Festival in Port Aransas, the city bordering Aransas National Wildlife Refuge in southern Texas, to celebrate the magnificent birds’ annual migration to their wintering grounds. Thanks to the hard work of conservationists, including protections from the Endangered Species Act, the Texas wintering flock has grown to more than 500 birds, though they are still among the rarest on the planet.

In 1941, only 15 Whooping Cranes from a single wintering flock survived in Texas after settlers developed their nesting habitat. “When the breeding populations were destroyed, the wintering areas were there but there were no birds,” George Archibald, co-founder of the International Crane Foundation, who famously courted a female whooper named Tex in 1976, told Audubon. “The only breeding population that wasn’t destroyed was a little flock that came to the Blackjack Peninsula here in Texas"—land that is now part of Aransas National Wildlife Refuge.

To get to the refuge, a group of festival vistors and I boarded a catamaran endearingly named Wharf Cat and took off from the Port Aransas coast. To improve our chances of finding the cranes, we would have to venture through the refuge via a narrow passage of water accessible only by boat. A thick layer of fog shrouded the entire area during the two days I spent there. Soon, it completely engulfed the waters around me, conjuring impressions of a faraway land.

Two hours later, grass poking through the fog reminded me that we were indeed in a marsh as the boat slowed to a crawl. Already deep in the refuge, wildlife dotted the landscape around us—a Brown Pelican dove for fish, egrets waded in the distance, gulls followed closely behind the hull. It didn’t take long to find our quarry. All at once, passengers scrambled to one side of the boat, but not before grabbing their binoculars, scopes, or phones. Shutters clicked madly; our voices dialed down to whispers. A pair of adult Whooping Cranes and their juvenile stood several hundred feet before us, blissfully unaware of our antics.

While the fog made viewing the cranes more difficult, it felt like a testament to the birds’ ethereal and mysterious nature. With soft, white feathers and ruby-capped heads, they gracefully dipped their beaks into the water, searching for insects, crabs, and small fish. Sure enough, an adult caught a blue crab, and the juvenile croaked for its meal soon after. Whenever they weren’t eating, the adults watched over their territory. These dignified birds don’t ask for attention; they command it. And in this part of the refuge, Whooping Cranes rule the land.

It's alarming to think that this family would not exist today if it weren’t for protections put in place to save them. In 1967, the year Archibald danced with Tex, Whooping Cranes were one of the first birds to gain federal protection under the Endangered Species Act, which has prevented 99 percent of listed species from going extinct. The act made killing, injuring, or harassing the birds a criminal offense; that helped relieve pressure on the wild birds and allow time for reintroduction projects and habitat restoration to spur the species’ population growth.

“When I moved here in 2011, the Whooping Crane count was in the 200s,” says Colleen Simpson, nature preserve manager for the City of Port Aransas. “Last year we broke 500, so they’re increasing in numbers. That’s a great thing to see.”

The species isn’t completely out of danger yet, but it’s on the right track, proving that we can reverse even the most daunting environmental consequences with legal protections and dedicated conservationists. Such strides are something we can all be grateful for—but if you ever get a chance to witness these majestic birds in real life, as I did this year, it’s all the more uplifting.