Shorebirds 101: What to Look for When You Hit the Water

The diversity of shorebirds is stunning, but it can also be overwhelming. Here are four staple groups to get you started. 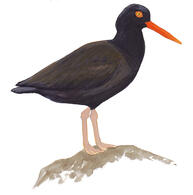 Shorebirds are an amazing collection of beaks and legs, molts and rumps, quirks and feats. They’re among the most incredible athletes in nature, with some making multi-day, non-stop flights to reach their wintering or breeding areas. While they’re often considered brownish and dull, certain species are strikingly colorful for a few summer months. If you’re lucky enough to visit the Arctic—where many of them breed—you may also find them performing complex aerial displays and songs. It contrasts their quiet, demure behavior on the North American mudflats at other seasons. But it’s at those other times that they gather in spectacular numbers, sometimes in the tens of thousands, creating an exceptional spectacle for birders to take in.

Yet for newer birders (and a handful of experts), learning shorebirds can feel absurd. Part of the problem is that there are dozens of North American species: up to 57 regulars, with nearly 40 in the sandpiper family alone. Some are truly similar to each other (ahem, yellowlegs); others are confusing due to their various plumages over different ages and seasons. To tackle the shorebirds, you need to first winnow them down to a group. Once you have a smaller set of species, the identification challenges become a bit clearer.

In North America we have two oystercatcher species: Black on the Pacific coast and American on the Gulf and Atlantic coasts. These are big, heavy, and rotund shorebirds with thick, elongated pink legs. What makes them stand out, though, are the long and strong red-orange bills.

Favorite fact: These birds don’t dine on oysters, but instead specialize on other shellfish such as clams and mussels. It's fun to watch oystercatchers open clams: They’ll either peck a hole in the shell or pierce the area between the two halves and pry them apart. Young oystercatchers learn these table manners from their parents; but they will only use one strategy or the other.

This family only has two species on our continent, the American Avocet and Black-necked Stilt, and they’re not all that alike. They’re both relatively large, leggy, and long beaked, with strong black and white patterning in the plumage. The pied patterns are classic of these two birds. The avocet is unique in having a strongly upturned bill and gray legs. The stilt is much slimmer and has a pin-straight black bill with bubblegum-hued legs.

Preferred beach spot: These species are associated with brackish water habitats. Check for them in salt marshes on and off the coast. (For instance, the Great Salt Lake in Utah is a breeding hotspot.)

Favorite fact: Among birds, the stilt has longest legs relative to its body size—second only to flamingoes.

As a family, plovers are found throughout the continent with several species breeding as far north as the Arctic. The Killdeer is the most widespread and well-known plover; it’s the only one with two breast bands. Plovers are very visual in their foraging, which lends to their unique movements and behavior. Typically, they’ll stroll along the ground and stop abruptly when they see signs of food to jab at the sand or mud. Then they’ll set off again and repeat the process. This stop and start motion is easy to notice if you look for it. Because they’re so visual and sometimes feed in the dark, plovers have large eyes. Their bills are also short and relatively strong, allowing them to peck and pull rather than probe. In fact, they look like long wooden pegs from a distance.

The family can be broken down further to the larger “black-bellied” plovers. These species, which include the American Golden-Plover and of course, the Black-bellied Plover, have striking breeding plumages with ebony underparts. The smaller plovers such as the Killdeer almost all have a dark band or two on the breast or broken bands on the sides of the chests. For example, the Semipalmated Plover has a complete ring, while the Snowy Plover is restricted to “spurs.” Their colors are all different shades of brown and beige, almost like dry or wet sand. Watch for black versus orange legs to further separate the banded plovers.

Preferred beach spot: Some plovers prefer full-on sand; other reign in mudflats or wet, sandy areas. Look for Killdeer on farms and soppy meadows. Piping and Snowy Plovers are always a good get on the beach (especially when there are chicks).

Sandpipers are by far the largest group of shorebirds. They vary wildly in size and bill length and shape. Contrary to plovers, they also probe with their beaks and use the sensitive tips to feel for their food. So expect to see a bunch of headless birds in the water . . . more ID fun!

The larger sandpipers come in two flavors: those with bills that curve down, the curlews, and those with straight or slightly upturned bills, the godwits. But even among flocks of godwits and curlews, their beaks can vary quite a bit, leading to slightly different foraging styles.

The main set of sandpipers comprises the genus Calidris. It includes a handful of sparrow-size species collectively known as "peeps," along with the better-known Sanderling. This speedy little bird can be found on every U.S. coast, chasing the waves in seemingly choreographed packs. Other popular sandpipers span the chunky Ruddy and Black Turnstones, the odd and distinctive Spotted Sandpiper, the stately dowitchers, the deceptive yellowlegs and their Tringa relatives, the portly, goofy snipes and woodcocks, and the phalaropes, which will literally swim circles around you. Spring is the best time to learn all the different birds and their shapes, as the bright plumages make them easier to separate. But summer is the perfect season to choose a few species and start practicing for next year.

Preferred beach spot: Sandpipers may be found in oceans, creeks, estuaries, and even grasslands. While their habitats are wildly diverse, a mudflat at low tide is just the place to get a generous helping of species.

Favorite fact: Sanderlings are elusive during breeding season as they mate in the far northern tundra. But over migration and in winter, they become one of the most widespread birds on Earth and can be found on beaches in every continent except Antarctica.

Study up! Master your shorebirds and hundreds of other North American bird species with our free Audubon bird guide app.

Without coastal restoration that makes beaches less vulnerable to storm surges, climate change will be a threat, and not just from sea level rise.

For prime viewing, head to these East Coast beaches.