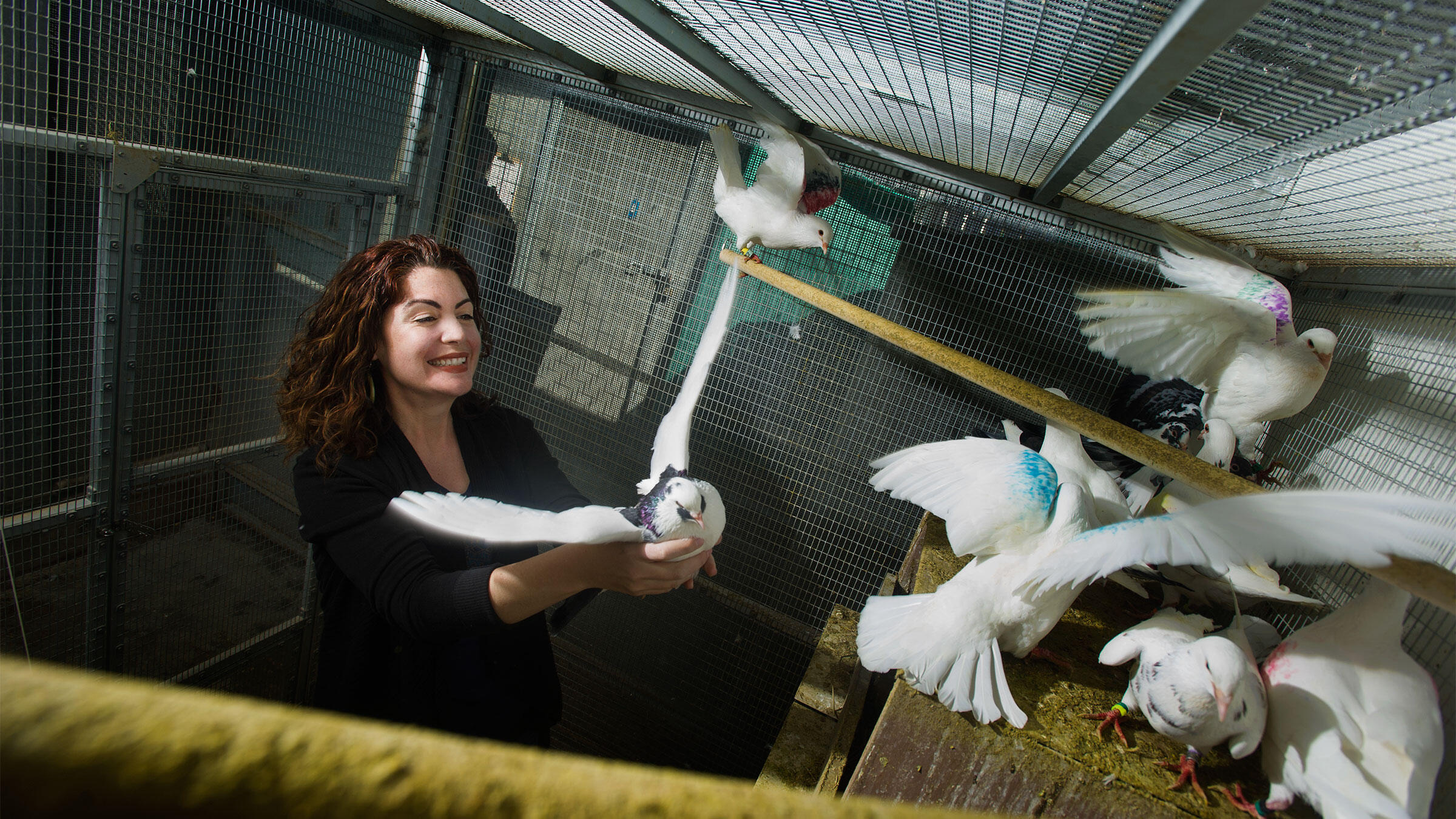 Rebecca Calisi was a co-author on the new study that found varying gene expressions among male and female Rock Pigeons. The results could have huge implications for future research. Photo: Karin Higgins/UC Davis

Males are often the default sex for studies, but new research showing sexes are more genetically different than previously thought could change that.

In a perfect world, females would have the same representation as males at work, in culture, and for pigeon gene-expression studies.

While scientific fields are slowly being more inclusive to women—the National Science Foundation estimates that women hold slightly more than 28 percent of science and engineering jobs in the United States as of 2015—one often-ignored issue has been the underrepresentation of women in scientific study samples, including studies with animal test subjects. For a variety of reasons, males have often been the default test subjects.

A new study suggests that this bias toward one sex could be detrimental to study findings. The study, which was released this week in Scientific Reports, mapped out a significant portion of male and female Rock Pigeons’ hormone systems to find that the sexes have different baseline levels of activity in tissues and organs such as the pituitary gland. While scientists knew the sexes have different active genes in reproductive organs, the researchers from the University of New Hampshire and the University of California, Davis found the activity in other organs surprising.

“The pituitary isn’t the first place you go to look for sexual differences,” says Rebecca Calisi, co-author of the study and an assistant professor of neurobiology, physiology, and behavior at the University of California, Davis.

These findings raise many more questions—the biggest one being, how many parts of the body are genetically sexually dimorphic, or different between males and females? Without knowing, scientists in the past using all-male subjects were potentially missing sex differences because they thought males and females were the same, Calisi says.

In the study, the team measured which genes were active within a specific hormone subsystem that manages the birds' reproduction, growth, and development. The subsystem included the pituitary gland, the hypothalamus region of their brains, and the birds’ gonads. After taking tissue samples from each of these areas in the 24 birds studied, the team then used instruments to investigate what genes were active in each of the centers.

Though our genes are present throughout all of the cells of our bodies—and pigeon bodies, for that matter—not every gene is used to create proteins or messages in every cell, a process called gene expression. And it turns out that what genes are expressed in certain organs can be different between male and female birds. The researchers found that genes in the pituitary gland, a tiny organ within the brain that secretes hormones, showed different expressions in different amounts depending on the sex of the bird.

A way to avoid this problem in the future is pretty simple—include a similar amount of female participants in studies.

The lesson: Just because males and females both have pituitary glands doesn’t mean that they work the same way, and assuming so can lead to false conclusions, or at least ones that don’t apply to both sexes. A way to avoid this problem in the future is pretty simple—include a similar amount of female participants in studies.

Calisi says that these implications are not surprising; as a female researcher, she’s very much aware of the sexism in science. So to encourage other scientists to further this line of research, the team created a database and made the findings available to others. For their part, Calisi's team plans to use this data in conjunction with new genome-mapping technology to continue exploring what genes really drive male and female pigeon behaviors, while also fleshing out sex bias in studies.

The study's implications could be far-reaching. Not only will scientists begin to rethink the designs of their studies, but the findings are the first step toward potential new breakthroughs regarding the differences among the sexes. “Sexism at any level slows down the speed of scientific discovery,” Calisi says.