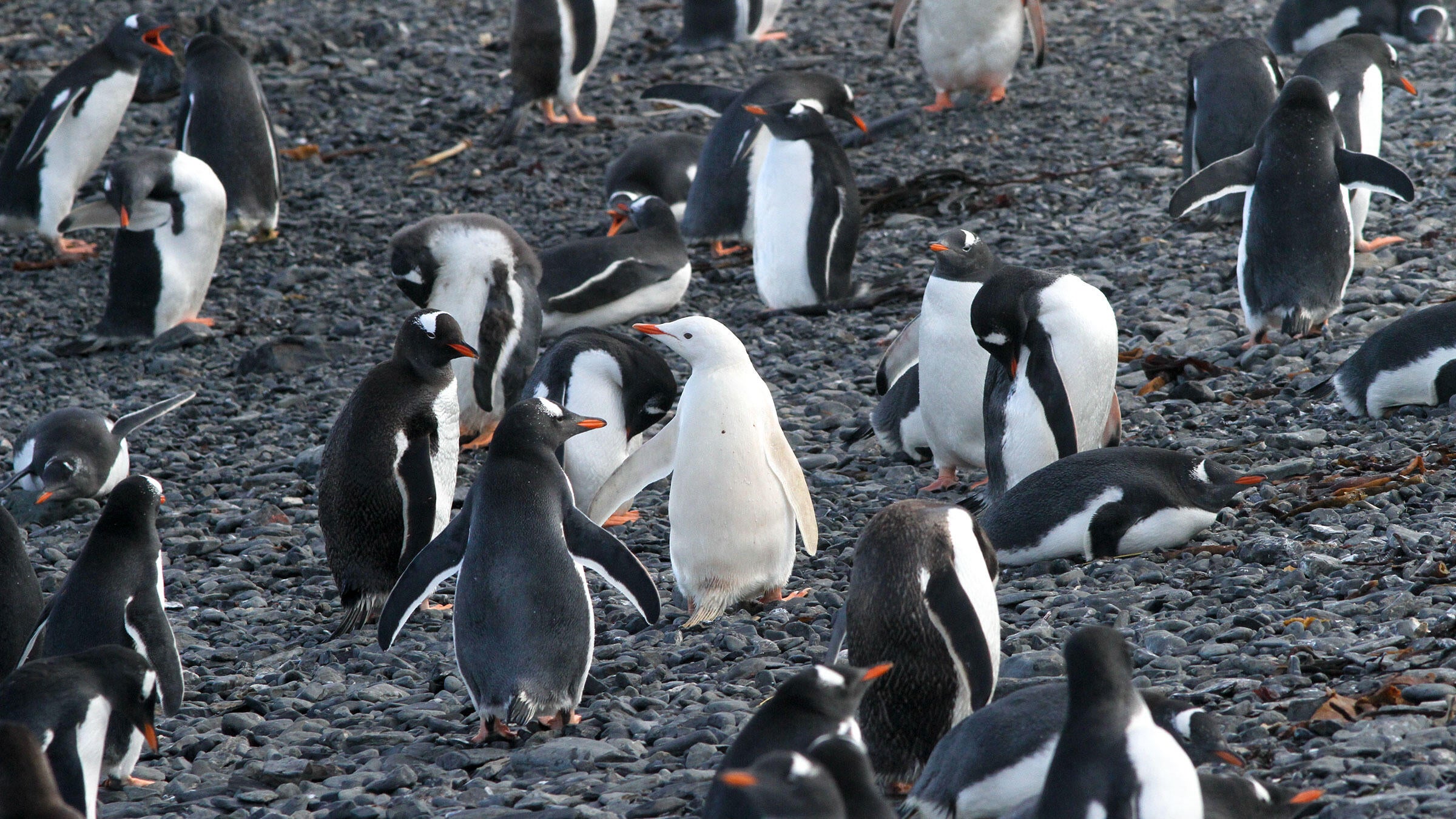 The condition behind this Gentoo Penguin's all-white feathers is unknown, but one thing's for sure: It's a great way to stand out in a crowd. Photo: Noah Strycker

Take a Look at This Extremely Rare White Penguin

On an expedition in Antarctica, experienced birder Noah Strycker spotted the ghostly Gentoo on the crowded shores of South Georgia Island.

What are the odds of seeing an all-white penguin?
One in a colony of millions—which is why my encounter with this pale Gentoo Penguin on South Georgia Island last month was nothing short of thrilling.
But let's start at the beginning. I've been roving around the Southern Hemisphere since the start of the new year as an expedition ornithologist on the M/V Endeavour. My post lasts for another two weeks and has taken me to wildlife hotspots like the Falklands and the East and West Peninsula. The polar tour also stops at South Georgia Island, which is largely undeveloped and located in the stormy Atlantic Ocean between Argentina and Antarctica.
South Georgia Island has a place in history because of Ernest Shackleton's heroic crossing in 1916 to reach civilization and save his crew; today, however, it's overrun with wild penguins. Half a million pairs of King Penguins breed on the island between October and March, along with thousands of Macaronis, Chinstraps, and Gentoos. It takes several days at sea to reach South Georgia—there's no airport or overnight accomodations—yet it's worth it for the spectacle that unfolds along its grassy shores.
That brings me back to my extremely lucky encounter with the bird pictured above. Gentoo Penguins typically wear a classic black tuxedo with white earmuffs and a red beak, so this one immediately stood out as it waddled up the crowded beach. It barely had any patterning, and its beak was redder than those around it. It's hard to know if the bird is albino or leucistic or just a mutation, but it definitely has some sort of pigment problem.
When it comes to long-term survival, birds with irregular plumage may have a real disadvantage. The black and white body of most penguins is a form of marine camouflage called “countershading,” which helps them blend into the ocean. A pure white bird could have a harder time sneaking up on its prey underwater—or hiding from predators who might enjoy penguin, for that matter.
This particular Gentoo appeared to be in good health. The others seemed to regard it without stigma, letting it mingle like any other colony member.
In more than a dozen Antarctic trips, I’ve seen a few odd-looking penguins including an all-black Adélie Penguin and a couple of blond Chinstraps, but this was my first entirely white one. It was like seeing a ghost.
***
Freebie Alert! Love birds but haven't mastered identifying them yet? Download our handy Audubon Bird Guide app to get started today.