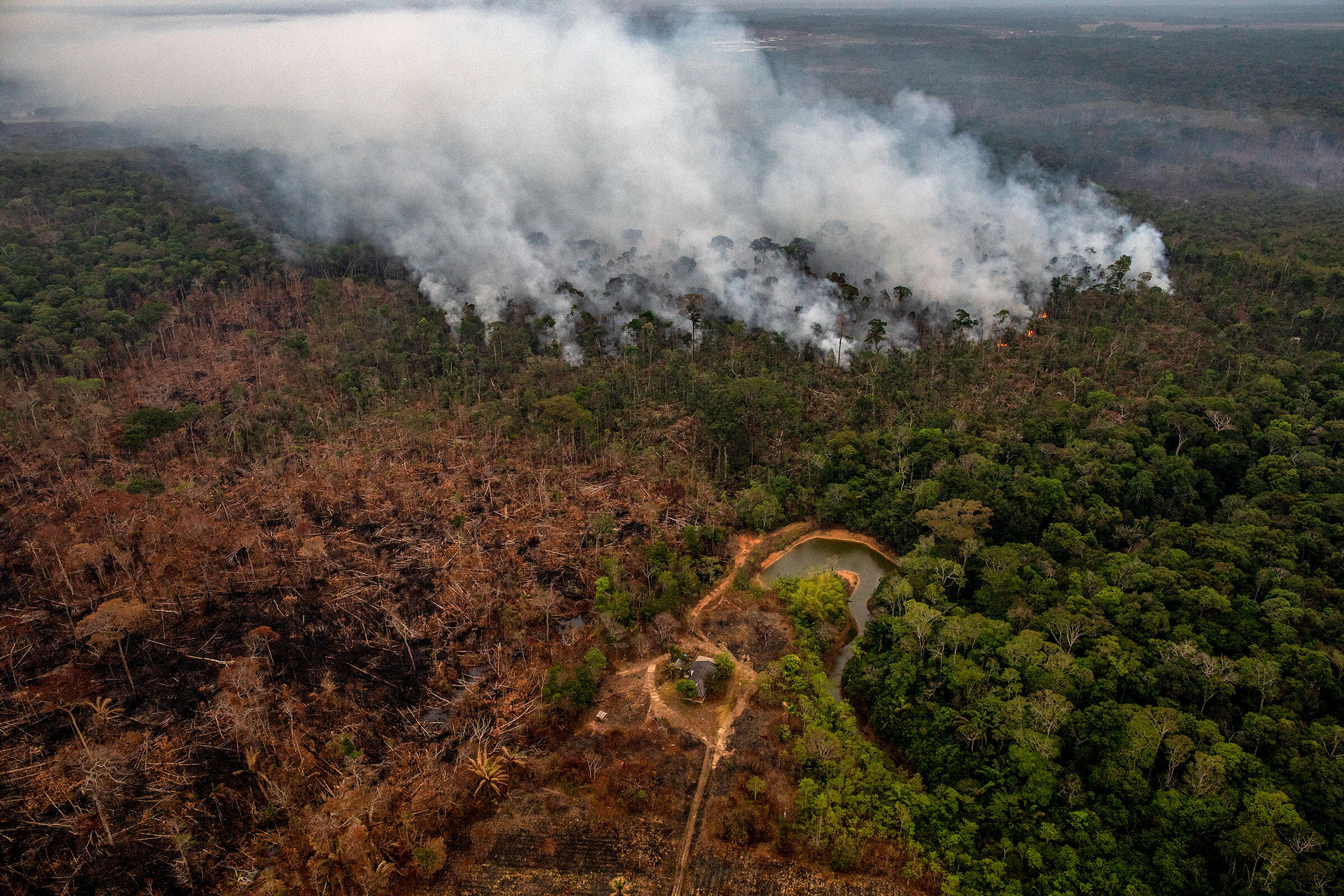 The Amazon's Blazing Fires Are Squeezing Habitat for Imperiled Birds

The fires are not natural to the ecosystem—and add fuel to mounting threats that birds already face in the region.

The medium-size Golden Parakeet is almost entirely yellow—a rich, bright color, like a jar of French mustard—save for deep green feathers along the tips of its wings. The indigenous people of the Amazon call it an ararajuba, or small yellow macaw. The endemic Brazilian Amazon birds are known for caring so much for their young that they enlist fellow birds to help raise each chick.

Braulio Dias, an ecologist at the University of Brasília, a former head of the United Nations Convention on Biodiversity, and the current chairman of BirdLife International, worries they'll need more help than that to survive this year in the Amazon.

This season, thousands of fires have been burning up the Amazon in Brazil and Bolivia, including in the habitat of the Golden Parakeet. It’s a species whose habitat is already threatened by deforestation, says Dias, and fires add to the pressure. Other vulnerable species that share similar habitat, according to a national action plan from Brazil's Chico Mendes Institute for Biodiversity Conservation, include the Belem Curassow, a large gray bird that sings through the night, and the Black-winged Trumpeter, as well as hundreds of other species. What's more, some migrating birds that winter in the tropical forest, such as Veeries and Blackpoll Warblers, will begin arriving from North America in coming months and may discover a different landscape in places, according to avian researcher Luke DeGroote.

Although fires are not uncommon in the Amazon, they’re also not a natural part of its ecology, making its birds, plants, and other animals especially ill-equipped to deal with blazes, Dias says—unlike in Brazil’s nearby drier savannas, or cerrados. Rather, the Amazon fires are sparked by humans, either through recklessness or intentionally, and sometimes illegally, as a means of clearing land. “These are not wildfires, where the fire spreads from tree to tree through the canopy,” he says. Instead, they are often part of slash-and-burn methods of farming. “In those areas, the impact on wildlife already happened with deforestation," Dias says.

Even before this year, scientists were already sounding the alarm about a recent spike in Amazon deforestation rates. The cause of this season’s widespread fires—which are almost double in number from this time last year, and the worst since 2010—is debated: Christian Poirier, program director for the non-profit Amazon Watch, says many have been set intentionally by ranchers or land-grabbers as they clear forested land, empowered by the current Brazilian administration's pro-development policies and rhetoric. Others argue they are accidental, from, say, a cigarette butt tossed in a forest desiccated by the dry season. Probably both are true.

In any case, the combination of nearly 50,000 blazes this year and increasing deforestation—as well as a climate change-driven trend towards more drought in the region—has left experts deeply concerned about the fate of this key biome for birds and people, sparking a recent international outcry. Ecologist Thomas Lovejoy, who had worked in the Amazon for decades, worries these risks feed into each other and could send the ecosystem into a “tipping point” from which it can’t recover, as he told Audubon earlier this year.

The threat to birds from fires these recent months, however, is indirect, Dias says—many occur in already-degraded habitats, and birds are likely to simply fly away, so eggs and chicks are lost. But even as evacuees find new habitat nearby, they now have to compete with other birds, wildlife, and people with already-established territory. Avian habitat, in other words, is getting more squeezed. “In the long term, there is less forest for bird populations in areas impacted by deforestation and fire, and this will promote a reduction in populations due to competition,” he says. And while arriving migrating birds are often more flexible in their habitat needs than year-round breeding species, they, too, feel the building consequences.

Philip Fearnside, an ecologist at the National Institute for Research in Amazonia, agrees that fires add to cumulative effects in the ecosystem. Extreme degradation—where tree mortality from logging and successive droughts and fires cause forest to be replaced by open vegetation—is increasing, and will likely continue to do so, he says.

And even bird populations that do not live in the Amazon could be harmed by these trends, as fires release carbon from and ecosystem that has been absorbing and storing carbon dioxide up until now. That carbon in turn could accelerate the pace of climate change across the globe, threatening birds everywhere, but especially those whose habitats are already disappearing.

"The Amazon is a cornerstone of global climatic stability," Poirier says. "Without the Amazon, we would not have one of the most important buffers against climate change."

One crucial step to stem losses, he says: supporting indigenous land rights. When these stewards live on the land, forests benefit. Another: Limit beef consumption when you don't know its source—or buy beef and other foods that are  certified to avoid destructive ranching practices and maintain wildlife habitat. All of these actions could help Amazonian birds, like the Golden Parakeet, that are running out of places to fly.

After wildfires, grasslands and deciduous woodlands are replacing evergreen boreal forest and transforming the state's terrain and ecology.

Deforestation and Drought in the Tropics Are the Biggest Threats to U.S. Forest Birds

Within 40 years, migratory songbirds will face greater danger where they overwinter in Central America than where they nest, new research says.