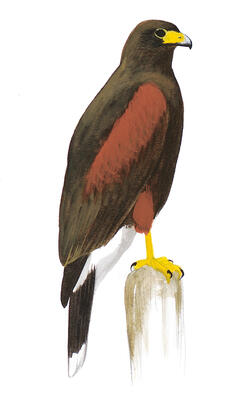 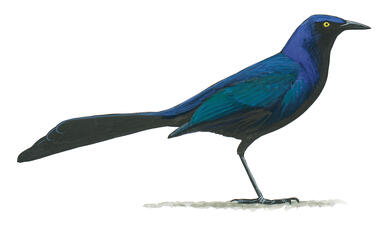 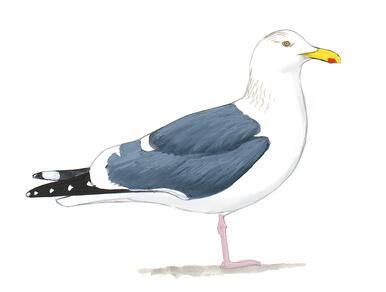 On a toasty October morning in Scottsdale, Arizona, guests eating oatmeal and eggs on the covered patio at The Phoenician hotel’s restaurant were taken aback to see a man strolling around with a hawk on his leather-clad arm. A few took out their phones to snap a photo.

Shannon McQuerrey, a master falconer for more than 20 years, and his Harris’s Hawk Calvin weren’t there to grab brunch—they were there to guard it. Specifically, their job is make sure customers remain undisturbed by noisy grackles that like to pick at plates of food.

Throughout the morning, McQuerrey flew Calvin around the lawn between the pool and the restaurant to deter the grackles. The goal was to scare them, not harm them—or “haze” them, as falconry jargon goes. Grackles are wily birds, McQuerrey says: “Plastic owls don’t work.”

Traditional falconry—using birds of prey to hunt—has been around for thousands of years. But in modern times, companies like McQuerrey’s employer, Falcon Force, also provide raptor-for-hire services as a sustainable, chemical-free, and barrier-free form of pest control. Typically, these firms employ birds of prey to keep watch over valuable crops on farm fields or vineyards, deter flocks from landfills and oil platforms, and other more industrial uses. Now they are increasingly deployed in lower-stakes, recreational scenarios at hotels, pools, and beaches.

Harris’s Hawks are particularly popular species for these kinds of jobs, says Gewelber. They are relatively social and comfortable around crowd, and are less likely to fly away. And while the abatement hawk is doing its job in Las Vegas, the pair also like to bring another bird that is licensed just for educational purposes. “People like seeing the birds up close...and they love getting pictures with them,” Gewelber says.

The hotel, for its part, has been happy with the fear the hawks inspire in other birds. “The falconry program at Wynn Las Vegas has proven to be one of the most effective ways to safely and humanely control the bird population surrounding high-traffic areas of the resort, including outdoor dining patios and pool areas,” said a hotel spokesperson in a statement.

Meanwhile, master falconer Adam Chavez is faced with the seemingly impossible task of controlling where gulls sit on California beaches. For years, Poche Beach in San Clemente, California received low grades for cleanliness due to the gulls, which like to hang out (and poop) in a stream that runs directly into the ocean. Now, because of the falconry and other mitigation activities, it is a much more appealing swimming environment, according to outside testing.  “We'll just push out the gulls, not the other birds," he says. "And it works, it’s really effective."

Like at the hotels, other cities have raptors doing beach duty simply to keep their visitors from being harassed. In Ocean City, on the Jersey shore, officials employed raptors to control aggressive gulls that steal french fries, pizzas, and otherwise harass sun bathers, the New York Times reported last year.

So why aren’t falcons flying high at every outdoor hotel, restaurant, and beach? Unsurpisingly, none of these services come cheap. Obtaining a falconry license is rigorous and care of the birds is costly. For example, a few years ago, a two-month falconry abatement contract at Redondo Beach in California cost $70,000 according to a local newspaper.

Because of this, Alaverdian of Falcon Force says he normally targets four-star and up hotels as potential clients. Despite the price tag, he still has to turn down jobs. The biggest limitation in this booming businesses? The availability of falconers. ​