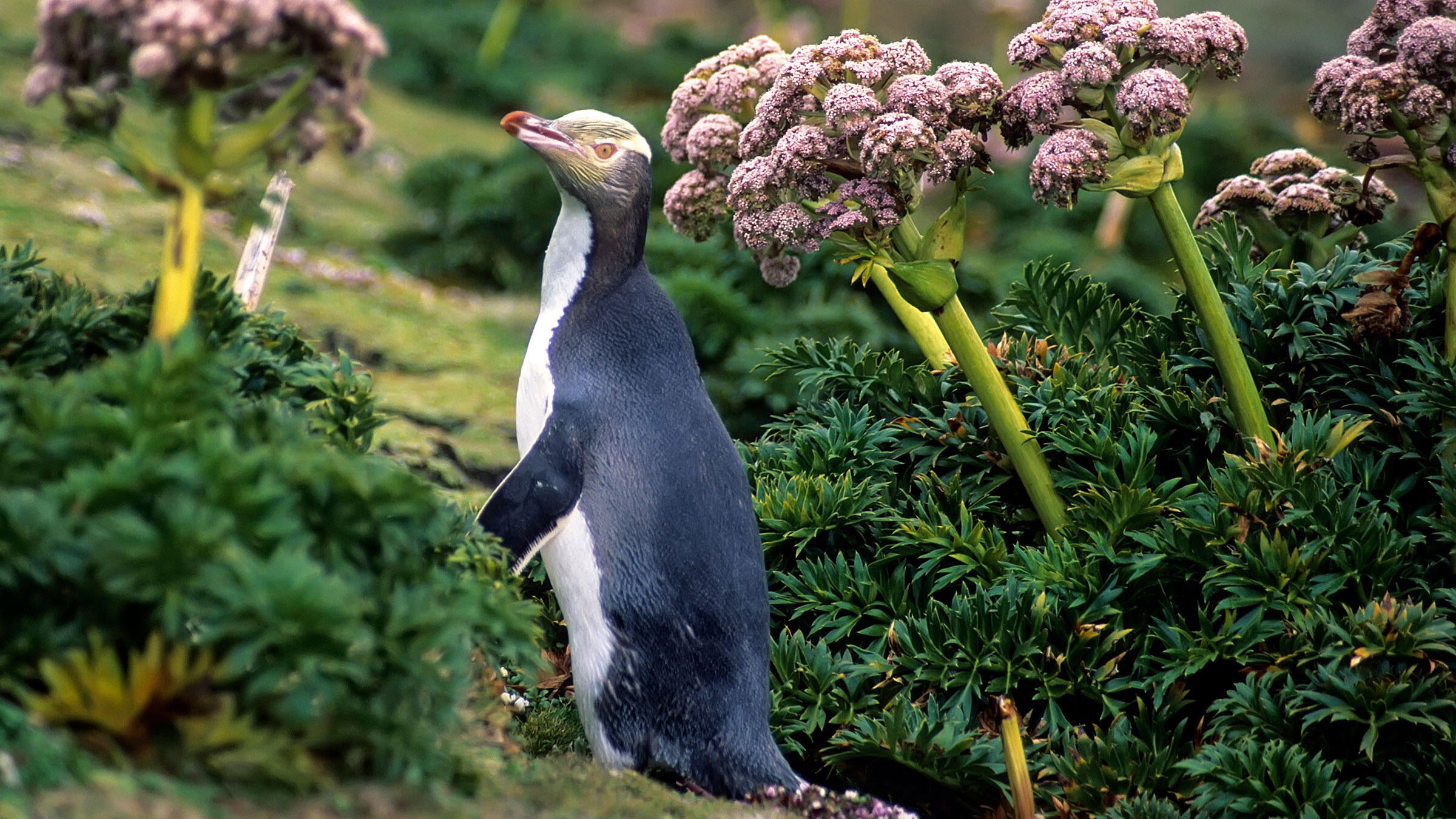 The Campaign to Save the World's Shyest Penguin

Sharks, forest fires, and overfishing—life for Yellow-eyed Penguins is no walk on the beach.

Despite their flashy eyeliner and rockstar highlights, Yellow-eyed Penguins have no interest in taking center stage. At just two feet tall, these evasive little waddlers are some of the shyest and most elusive penguins in the world. In fact, they love their privacy so much they even go out of their way to build nests away from other penguins. While they may not seek the fame and glory of their marching cousin, the Emperor Penguin, they’re no less adorable—or in danger of disappearing. Most penguins spend their days hopping on and off of ice floes. Yellow-eyed Penguins, however, prefer the beaches of New Zealand’s South Island where they spend their days covertly feeding on krill, fish, and shrimp before scampering up the sandy shores to hunker down—incognito, of course—in dense coastal forests and shrubland for the night. Unfortunately, their affinity for a forested, beachside lifestyle has left New Zealand’s rarest penguins exposed to a host of threats on land and at sea. A combination of habitat loss, predation, disease, and food shortages has created an multi-faceted, uphill battle many conservationists fear the Yellow-eyed Penguin cannot mount alone.

The Yellow-eyed Penguin first got into trouble when large parts of its natural habitat were destroyed in the previous century. Farmers bulldozed and torched the forests where the penguin lived to make way for cattle and sheep.

In response to rapidly declining penguin numbers and deforestation, conservationist Fergus Sutherland founded the penguin reserve Te Rere in 1989, setting aside 160 acres of crucial Yellow-eyed Penguin habitat. The land buffer, coupled with reforestation efforts throughout the early ‘90s, led to a brief increase in penguin numbers before a 1995 fire spread from a neighboring farm to the reserve and wiped out half the population. Since then, a new barrage of environmental and human-induced assaults continue to this day. As Haenen writes:

Young penguins often succumb to heat stress, as was the case in December when temperatures reached 95 degrees. And in recent years, many chicks have suffered from avian diphtheria, which causes ulcers in their mouths  that make it difficult to eat and breathe . . . Last year veterinarians had to suture about 50 Yellow-eyed Penguins that were wounded in barracuda or shark attacks.

In little more than a decade, the Yellow-eyed Penguin population has dropped by more than half, leaving just 2,000 left in the world. Sutherland and other penguin enthusiasts are calling on the government to enact comprehensive preservation efforts that ensure the birds are afforded protection where they nest and forage. That includes fishing regulations off the South Island, which would ease pressure that’s inducing the shark attacks. In the meantime, Sutherland sets traps for invasive mammals like ferrets and rats that prey on chicks, and scours the beaches for injured or sick penguins that would die without intervention and veterinary care. For many of the bright-eyed birds, he’s their last line of defense.

To read more about the Yellow-eyed Penguins’ battle and Sutherland’s efforts to protect them, check out the rest of Haenen’s piece here.