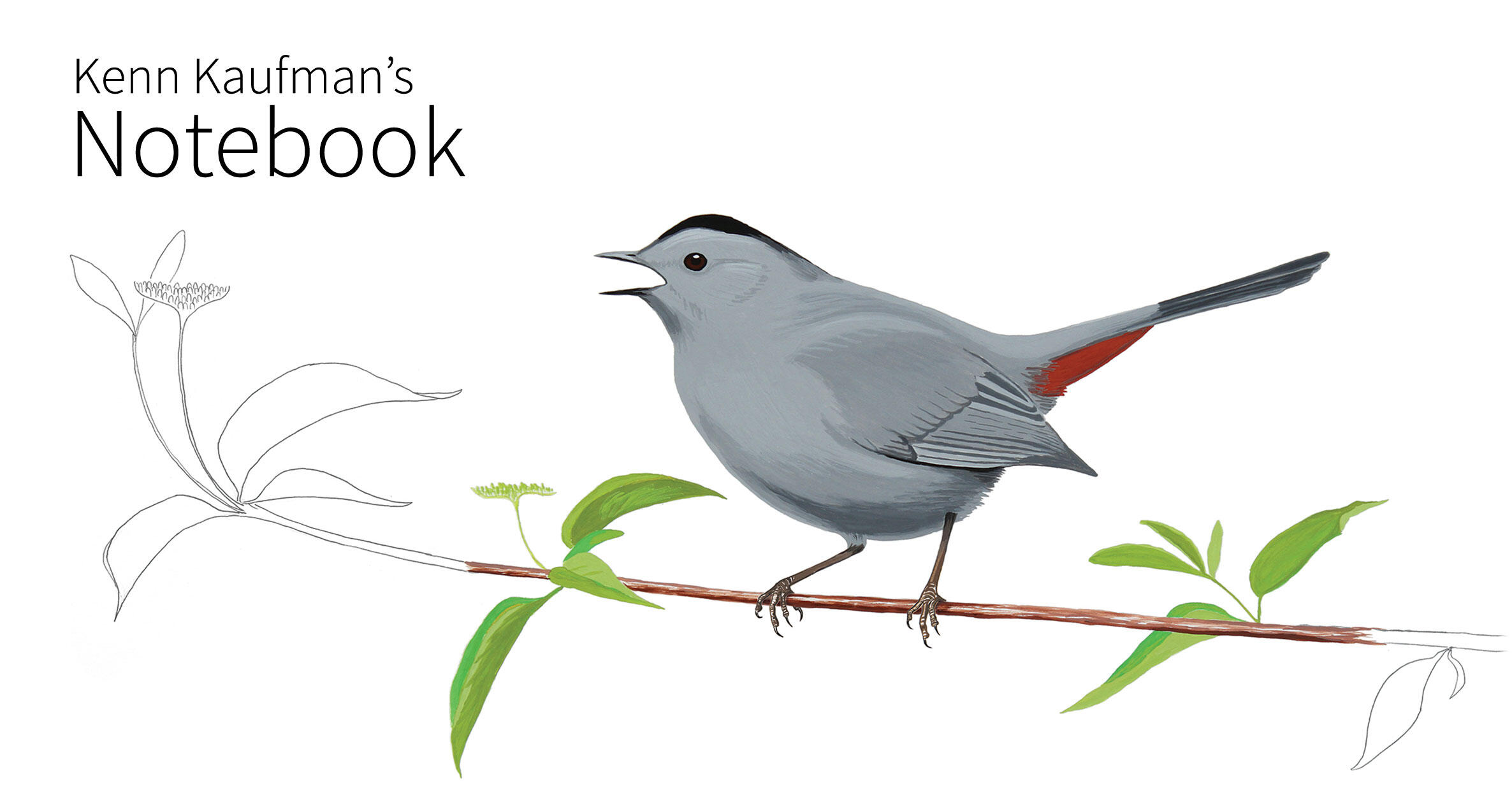 Which is more important: good looks or personality?

Before you answer, let me clarify: I’m talking about birds. As subjects for drawing or painting, I like birds with bright colors and strong patterns. But for actual birdwatching, you can’t beat a bird with interesting behavior, a bird with personality.

Take the Gray Catbird, a common, medium-size songbird of Eastern gardens and thickets. It’s not colorful—it is, in a word, gray. It has a little black cap and a cheeky patch of rusty-red under the tail, and that’s the extent of its decoration. But this seemingly drab bird has boatloads of attitude, a quirky personality that makes it a perennial favorite.

The catbird belongs to the same family as the mockingbirds and thrashers, and as we might expect, its voice is interesting. A mewing callnote, only vaguely catlike, is the source of the name. It also makes a rapid crackling sound, like a dry stick being snapped abruptly into pieces. Its song (if we can call it that) is a remarkable performance. Perching up in a thicket, a male catbird spews out a random series of notes—soft whistles and musical notes, harsh clucks and squawks, whines, gurgles, clicks, squeaks, and fragmentary imitations of other birds—at a rate of about 90 syllables per minute. This babbling delivery can go on for more than 10 minutes without pause, and although many of the noises are repeated, the sequence of notes keeps changing. It really sounds as if the catbird is improvising, making up the song as it goes along.

And this singer has stylish moves to go with his tunes. Watch a catbird in spring and you may see it adopting all kinds of weird postures: fanning and spreading its tail, drooping its wings, puffing out the feathers of its lower back, turning its head to odd angles, all accompanied by a running commentary of bizarre sounds. To add to its quirky appeal, a catbird may act intensely curious—another feline characteristic. People working in their gardens often notice a catbird coming to watch, cocking its head quizzically as it peers at the proceedings.

Its clownish actions are conspicuous, but the most intriguing thing about the catbird is much harder to observe: This species is remarkably good at thwarting the schemes of the Brown-headed Cowbird.

The names of the catbird and cowbird may differ by only a couple of letters, but the similarity ends there. Catbirds are doting parents. Cowbirds are not. The Brown-headed Cowbird, a member of the blackbird family, is North America’s most famous brood parasite. It never raises its own young. Instead, it lays its eggs in the nests of other songbirds, and the foster parents hatch the eggs and raise the young cowbirds, which grow rapidly and generally outcompete the legitimate offspring of the unwitting hosts.

This system works out well for the brood parasite only so long as the host birds accept its eggs. Fortunately for the cowbird, they usually do. Brown-headed Cowbirds are known to lay eggs in the nests of hundreds of other species: practically every small- to medium-sized songbird in their range with an open, cup-shaped nest. Most of those hosts go ahead and raise the foster chicks without seeming to notice the difference. If we go birding in summer, it’s common to see Song Sparrows, Yellow Warblers, thrushes, gnatcatchers, buntings, vireos, and many others feeding fledgling cowbirds.

Gray Catbirds don’t follow the script. They're frequent targets; according to some studies, cowbirds may lay eggs in close to 50 percent of catbird nests. But the catbird parents, unlike most other birds, recognize the alien eggs and toss them out. It’s very rare for a catbird to actually raise a young cowbird.

Do catbirds have an instinct to recognize cowbird eggs? Not quite. Instead, they have the instinctive ability to learn the look of the first egg in their nests, and to reject any that look different. Naturally, the first egg in a catbird’s nest almost always will be its own. The female, who does all the incubating, will come to recognize her own plain bluish eggs. When a female cowbird manages to slip in furtively and deposit an egg—buffy white, with dark spots—the female catbird will notice it within the next day or so, and will toss it out of the nest.

Because the catbird’s recognition of her own eggs is learned, not innate, it can lead to strange results. Dr. Stephen Rothstein, as part of his landmark studies on brood parasites and their hosts, has described a rare situation in which the female catbird learns the “wrong” egg. It might happen if a cowbird lays an egg in a nest and removes the catbird’s first egg, so that when the female catbird returns, she memorizes the cowbird egg pattern. Thereafter, if she continues to lay eggs, she'll identify them as not matching her mental image of the prototype. She’ll toss her own eggs out of the nest after she lays them, while continuing to incubate the cowbird egg. Clearly this is bad news for the catbird, but it’s such a rare occurrence that it shouldn’t take away from the Gray Catbird’s status as a stellar nest defender.