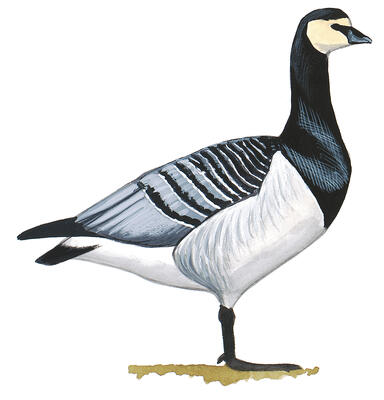 This week in Florida, birds got their own catcher in the rye—whether they liked it or not. The man’s name is Eric Pelno, and his mission was to catch every baby duck that jumped off a cliff at Florida’s Busch Gardens theme park. And he did. Fifteen to twenty fluffy little birds lept off a ledge and into Pelno’s waiting hands.

But for the ducklings, nothing was out of the ordinary. It’s normal for baby ducks of several species—Wood Ducks, Common Goldeneyes, Hooded and Common Mergansers included—to leap from intimidating heights within a day of hatching. The chicks can fall for over 30 feet until they hit the water or the ground. Not to be outdone, Barnacle Goose chicks launch themselves off ledges 400 feet high, pinwheeling off craggy rocks until landing, dazed and battered, at the foot of the cliff to meet their parents.

Though Audubon Field Editor Kenn Kaufman couldn’t identify the duck species from such grainy footage, he says they are likely feral Mallards. Any bird fringing on domestication would lack the full survival instincts of its wild counterparts. In such a touristy environment, it’s harder to tell if the baby Mallards would have needed human help, Kaufman says. “There was nothing wrong with what he did, and the fact that he cared enough to try to help is a lot better than the opposite reaction.”