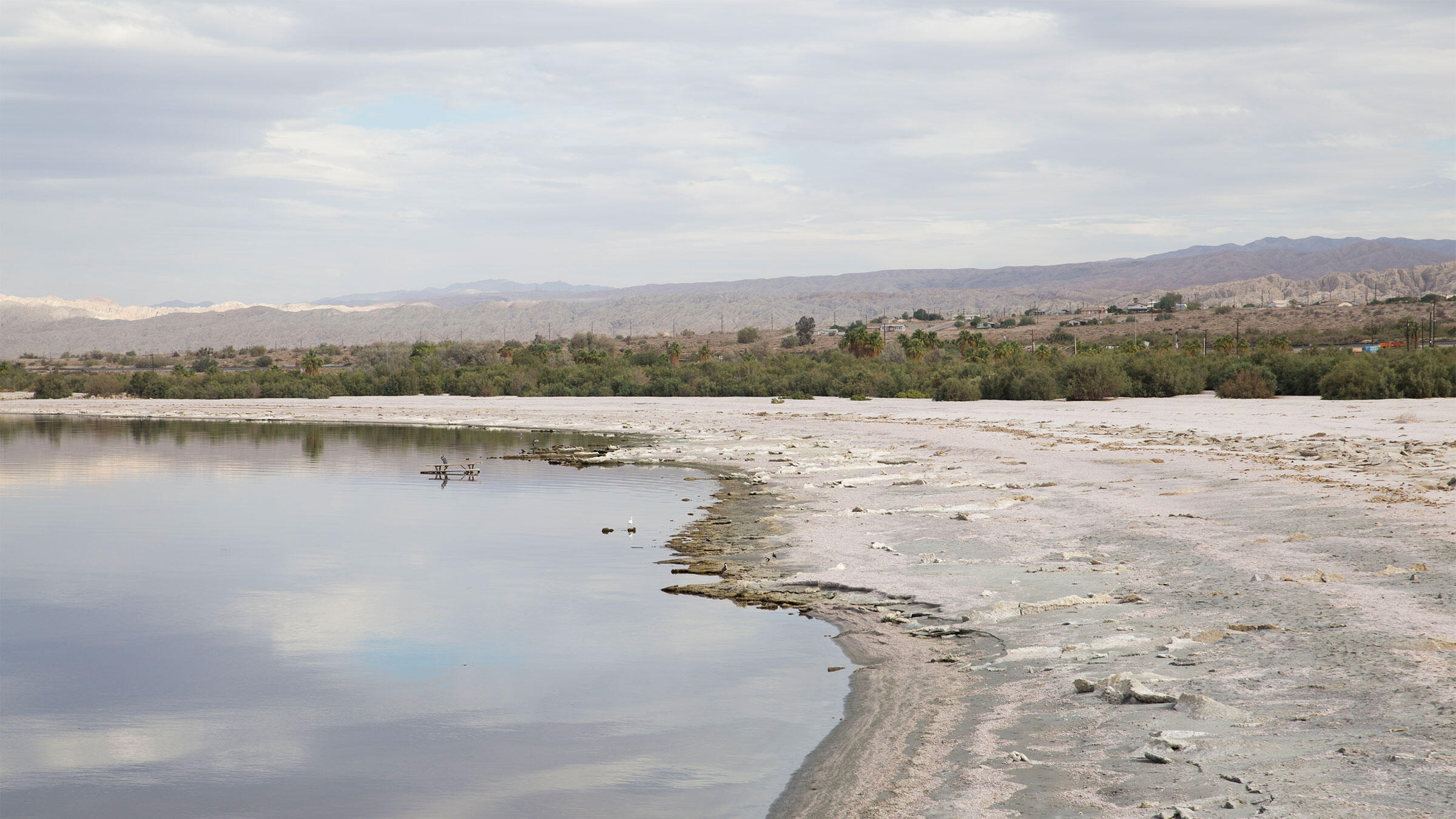 Herons and some Black-necked Stilts stand along the shores of the Salton Sea. Photo: Mike Fernandez/Audubon

Birds tell us a lot about the condition of any given landscape. If it’s healthy for birds, then it’s most likely also healthy for people.  At the Salton Sea, a saline lake in southern California, the birds have been telling us to pay attention and take action.  As the lake has shrunk and its waters have grown exceedingly salty, birds have abandoned what used to be a major migratory stopover.

But the troubles associated with the Salton Sea do not stop with the birdlife. Approximately 650,000 people live in its vicinity, and as the water dries up and exposes the lakebed, the health problems associated with blowing dust—worsening asthma, emphysema, and chronic obstructive pulmonary disease—also increase. The areas around the Salton Sea already experience some of the worst particulate air pollution in the state, as winds churn salty, heavy-metal laden dust from the playa into the atmosphere.

Why Are We Talking About This Now

While the Salton Sea has been in trouble for a while, we’re now reaching a crisis point as water deliveries to the lake have dwindled to nothing. Today the only water flowing into the lake is runoff from nearby agricultural fields in the Imperial and Coachella valleys. The best hope for fixing this problem comes in the form of Prop 68, a ballot measure that Californians will vote on this June 5. Today, the vote passed, and the bond measure allocates $200 million for Salton Sea restoration, part of a $4.1 billion package that will help manage water resources and park land across the state. The $200 million will join $80 million already appropriated by the state for Salton Sea restoration. The funds will be used to help realize the newly approved Salton Sea 10 Year Management Plan, a series of actions that will help rehabilitate the lake and comes with an approximately $500 million overall price tag—$402 million to rehabilitate 30,000 acres of habitat and other dust-suppression measures, and an additional estimated $100 million for operations and maintenance.

The biggest challenge to action at the Salton Sea has, thus far, been a lack of momentum at the state level. But as the human health toll of inaction rises, local and state governments will see a knock-on effect, says Audubon’s Salton Sea program director Frank Ruiz, when the people who live there will be too sick to work. “What is going to move the needle is the economic losses for the state,” he says. But the people of the Salton Sea shouldn’t have to wait until every last one of them is sick for lake restoration to start.

The Human Cost of Inaction

So how bad is the problem? First, consider that Imperial County—the county that encompasses most of the land around the Salton Sea—has the highest rate of asthma-related emergency room visits in the state. This public health emergency is directly related to all of the dust in the air.

“Our patients are coming in younger, coming in more severe, and they’re requiring a lot of concentrated medication plans that normally we hadn’t seen in the past,” says Luanne Carlson, a physician with UC Riverside’s Residential Medicine program in Palm Springs, California, who treats patients with respiratory illnesses.

Worse, explains Carlson, is that we probably don’t fully understand the true extent of the problem. That’s because many of the people who are suffering can't afford to pay for medical care in the United States, so they go to Mexico for treatment. And because so many people who live in the area are poor, they’re also not able to take the steps to mitigate the effects of air pollution, up to and including moving elsewhere.

In a study published by environmental scientists with UC Riverside in 2017, the researchers determined that approximately 10 percent of the dust in the Salton Sea area comes from exposed playa. That dust, which is under 10 microns in diameter, is more likely to be breathed deep into the lungs and cause severe respiratory problems. The scientists and doctors are most concerned that, as the lake dries up, the increased presence of playa dust will exacerbate the respiratory-health issues of the people who live in Riverside and Imperial counties.

“People who are going to be more prone and have a more severe form of these illnesses are children and the elderly. The problem is that playa-dust particles are so fine that they can be breathed very deeply into the tissues, and so there’s damage being done at a microscopic level,” says Carlson. “The worry we have for children at this point is that we just don’t have the studies as to what the long-term effects of these small particles in their lungs is going to produce over a long lifetime. The worry is that the damage will also be incorporated at the DNA level to cause congenital problems or even cancer.” 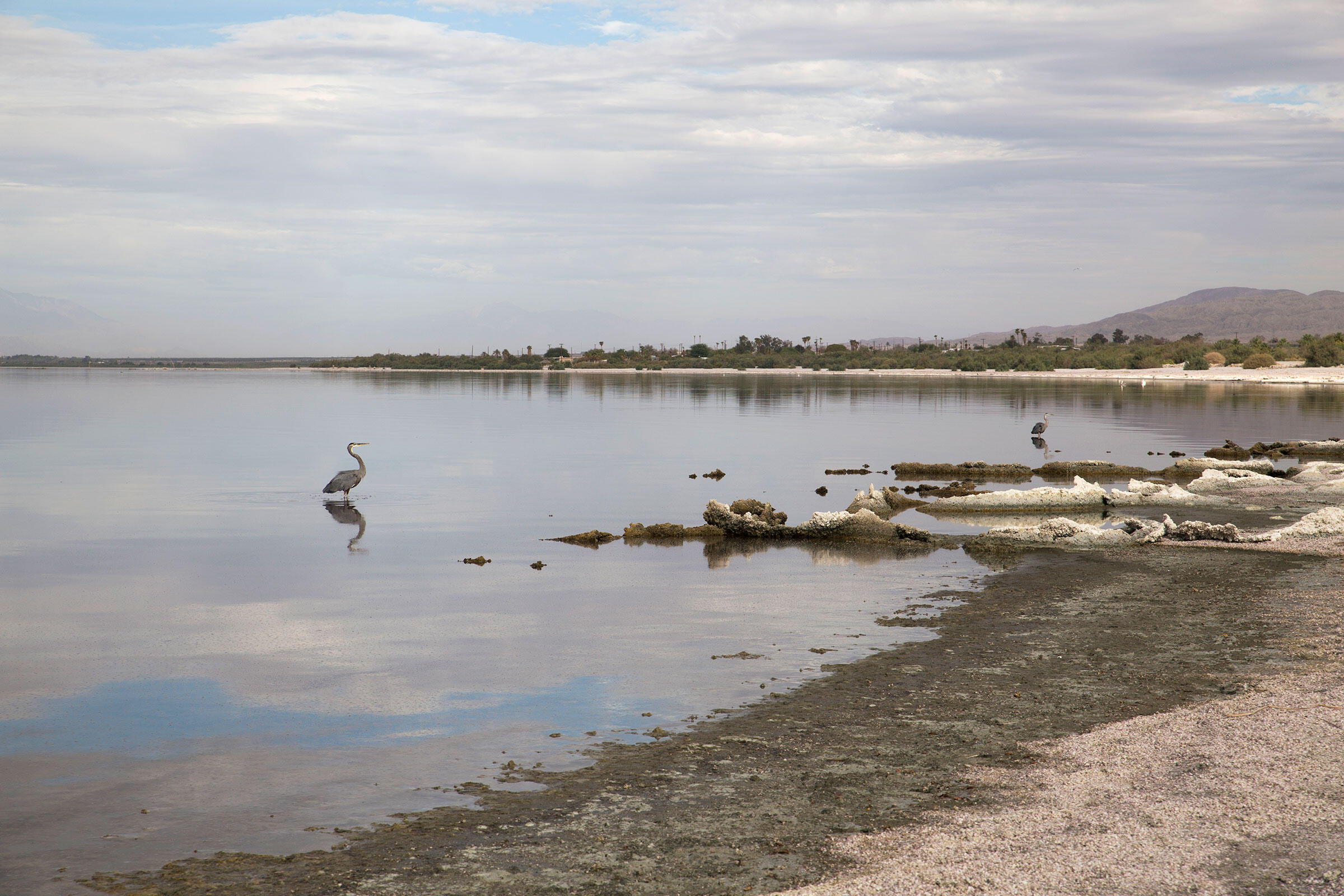 The Environmental Cost of Inaction

The drying of the Salton Sea is definitely for bad people, but it’s also proved terrible for birds.

“The sea is going through a period of pretty drastic change,” says Andrea Jones, director of bird conservation for Audubon California. “It’s a really incredible place in the Pacific flyway for migratory birds, but just in the last year, we’ve seen a lot of birds leave the sea. And they’re not coming back unless we do something to fix the problems here.”

According to Jones, the birds are abandoning the Salton Sea because the sea has become extremely salty as water inflows have dropped. The Salton Sea is currently three times saltier than the Pacific Ocean, and the salt levels are so high that even the resident tilapia have stopped reproducing, and invertebrates like pile-worms are dying off. Without reliable food sources, birds that depend on fish or worms to survive, like the Eared Grebe, Double-crested Cormorant, and American White Pelican, have all but disappeared from the lake.

This change has been rapid. “We first observed this around 2014, when the water coming into the Salton Sea was reduced and the salinity began to increase,” says Jones. “But it was really this past winter when there were really dramatic declines in the number of birds.” According to bird surveys done by Audubon scientists and others, where these birds would once number in the millions, by this year they numbered in the few thousands.

How We Can Save the Salton Sea

The funding allocated from Prop 68 will add valuable dollars to on-the-ground work, but that's only the first step. To save the sea itself, Audubon and other conservation partners will work with the State of California and others to begin restoration projects throughout the area. One way to achieve this is to enact Phase I of the Salton Sea Management Plan, colloquially known as “The 10-Year Management Plan.” But despite the 10-year Management Plan draft that was published in March 2017, the state has been slow to finalize and fund the blueprint and begin restoration efforts. We need your help to keep pressure on the government to get it moving.

This plan, which was developed by the state of California, with input from local agencies, conservation groups, and other local groups, lays out the framework for how to best manage the Salton Sea for both people and wildlife. Different scenarios are still being discussed, but one possible future Salton Sea will have active water-level management on each of three areas that will be separated with earthen dams—in effect it will become three smaller salt lakes. Another plan has a single, small central lake, and a ring of shallow pools and wetlands around it. Exposed playa will be restored to wetlands or will be covered with gravel to mitigate dust from the salt crusts. In all scenarios, the actual Salton Sea itself will be smaller than it has been historically.

The best example of how this would work in practice can be found at Owens Lake, a migratory birding hotspot that was once reduced to an almost dry lakebed playa producing some of the worst air pollution in the United States. After a conservation planning effort initiated by Audubon California because of it’s importance to birds, considerable work done by Audubon California, Eastern Sierra Audubon Society, Los Angeles Department of Water and Power, the California Department of Fish and Game, the Great Basin Air Pollution Control Board, and others, in 2018 it was designated as a part of the Western Hemisphere Shorebird Reserve Network, a group of the 104 most important areas for migrating shorebirds in the Western hemisphere.

Want to do more for the Salton Sea?

If you’re in California, you can help save this vital migratory bird stopover by joining Audubon California for Lobby Day on June 20.