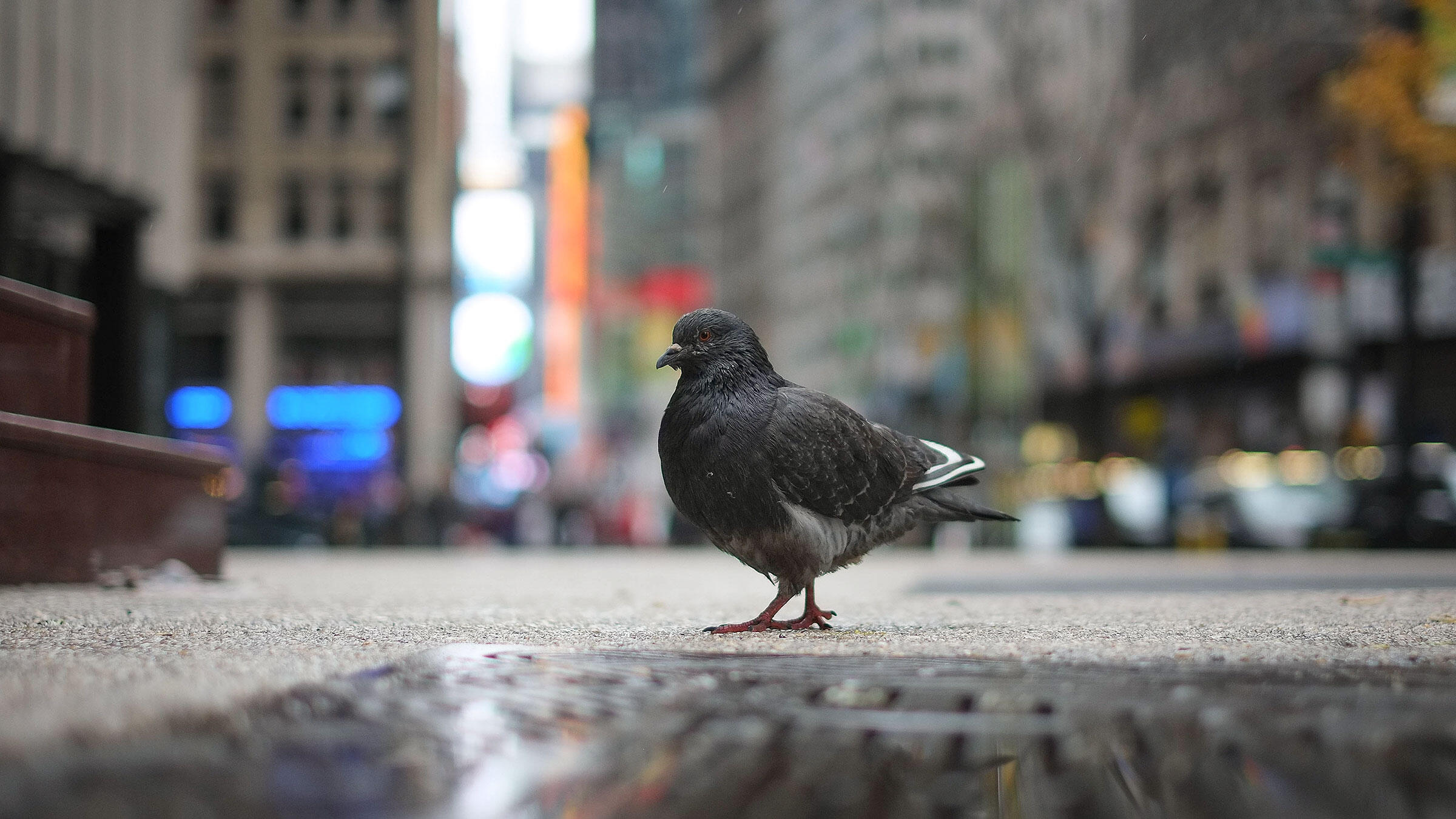 Like everyone else in New York City, Rock Pigeons are just trying to get by. Photo: Nick Harris/Flickr (CC BY-ND 2.0) 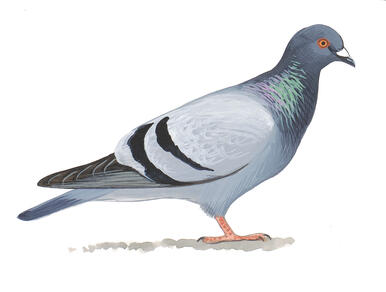 In 2005, sociologist Colin Jerolmack went to Greenwich Village to study how New Yorkers used the neighborhood’s “pocket parks,” what they wanted from these tiny green spaces, and how they thought the parks could be improved. He got an answer to that last question almost immediately.

“Literally the first day that I showed up to Father Demo Square, a pigeon crapped on me,” he says.

In the parks and at community meetings, people told Jerolmack over and over that pigeons were their biggest gripe with the parks. That’s not a complaint unique to Greenwich Village or to New York City. Around the world, we’ve criminalized feeding pigeons, shot them, poisoned them, trapped them, zapped them, fed them birth control, and used all manner of repellants—from plastic birds of prey to spike strips—to keep these “rats with wings” off of sidewalks, statues, and buildings.

We have waged war against pigeons, an essentially harmless enemy that has earned a level of scorn puzzlingly disproportionate to their crimes. We have uneasy, sometimes combative, relationships with other pests and nuisance animals—some of which are more destructive and dangerous—but the pigeon is absolutely despised. “The full scope of our disdain and distrust for the birds is impossible to quantify,” writes journalist Jon Mooallem. “It’s hard even to explain.”

Jerolmack’s research on the sociology of cities and human-animal interactions, set in motion by that pigeon poop out of the blue, has led him to a potential explanation, one that has more to do with us than with the birds. More than making a racket or pooping on park benches and people, Jerolmack says, the problem with pigeons is the way we think about them, and their greatest sin is simply being out of place in our minds.

Not long after he was crapped on, Jerolmack combed through 155 years’ worth of New York Times articles, tracking the conversation the city was having with itself about pigeons and trying to figure out how and why birds got labeled as pests. He found that while pigeons have been our neighbors in cities for thousands of years, they were problematized only recently, going from innocent bird, to mundane nuisance, to public enemy in just a few decades.

The early mentions of pigeons in the paper of record from the late 19th century are actually sympathetic to them, condemning the sport of pigeon shooting. Early in the next century, opinion shifted. “Pigeons became a nuisance through the 1930’s and 1940’s, nesting and defecating in and on landmarks, statues and sidewalks,” Jerolmack writes in his paper, How Pigeons Became Rats: The Cultural-Spatial Logic of Problem Animals. “In the 1950’s, we learned that pigeons carry disease. In 1963, they were framed by several officials as menacing vermin to be exterminated.”

In all of these articles, Jerolmack found concrete reasons for New Yorkers to be annoyed by pigeons—feces, noise, links to disease—but to him, they didn’t add up to a satisfactory explanation for the loathing they receive. They’re certainly noisy, and they defecate on people and property with abandon (and in great volume—a pigeon produces a hefty 25 pounds of excrement per year), but you can say the same about lots of animals. The threat of pigeon-borne diseases could explain our hatred, but there’s not much of a threat to speak of. Though the Times reported that one New York City health official had linked two deaths to diseases carried by pigeons, neither the New York Department of Health nor the Centers for Disease Control and Prevention (CDC) could confirm any cases of people getting sick from casual interactions with the birds, Jerolmack says. And epidemiologists at the CDC told him that people and pigeons rarely interact in ways in which the birds could make us sick.

If none of the pigeon’s natural characteristics could explain why we hate them so much, Jerolmack figured, then the issue isn’t anything that pigeons do, but how we see them and the spaces we share with them.

The pigeon-as-pest, he thinks, is a symptom of people’s idea that the environments we build are separate from natural ones. In what sociologists call our “imaginative geography” of cities, there’s a border that separates clean, orderly civilization and wild, uncontrolled nature. “That doesn’t mean there’s no nature, but ideally, the city is the place where we invite nature in in ways that we control,” Jerolmack says. “We cut out little squares in the concrete, and that’s where the trees belong. We don’t like it when grass and weeds begin to grow through cracks in the sidewalks, because that’s nature breaking out of those boundaries that we want to keep it in.”

Pigeons cross those boundaries frequently and visibly, inhabiting the spaces that we think of as our own. “More than most other urban animals, they prefer concrete and sidewalks and ledges over grass and shrubs,” Jerolmack says. “Rats will retreat to the sewers and bushes, and remain out of view, but pigeons invade the spaces that we’ve designated for people.”

By upsetting our imaginitive geography, pigeons show us that cities are not as subdued and scrubbed of nature as we think they should be. Those transgressions alone are enough to raise our ire, but because authorities and experts have connected the birds to disease, pigeons don’t just invade our space—they potentially pollute it. Marked as an epidemiological threat despite actually being poor vectors of disease, pigeons have also become a health menace in people’s minds. “If that’s the way we think about pigeons, then when you look around and you see that they’re everywhere, then they can become potentially terrifying,” Jerolmack says.

The urban terror was given a new name in June 1966, when New York City parks commissioner Thomas coined the term “rats with wings.” With that, Jerolmack says, pigeons were explicitly linked to disorder and disease, and our perceptions of them as nuisances, “dirty” animals, and health threats were all emphasized and threaded together in a neat little package.

“Rats with wings” soon went mainstream. It popped up in Woody Allen’s 1980 film Stardust Memories, and appeared in almost every article written about pigeons after 1990 that Jerolmack looked at—not just in the Times but in 51 other papers from around the country—in “language that claimed consensus.” The pigeon had ascended from minor annoyance, Jerolmack says, “to a symbol of what we find vile and morally repugnant in the urban cityscape.”

A bad reputation can be hard to shake, but as urban wildlife becomes more noticeable, better researched by scientists, and even celebrated by urbanites, the pigeon’s image might get a little bit of rehabilitation. For the biologists who study the “novel ecosystems” of cities, pigeons are exciting and interesting because they’ve adapted so well to cities, Jerolmack says, and that view may trickle out into the mainstream (see, for example, the hot take that “pigeons are underrated”). What’s more, our imaginative geography of urban areas is shifting. “We're witnessing a moment in cities where they're trying to encourage connections with nature and urban wildlife, and the idea of the city as the place where nature is not is changing,” Jerolmack says.

This probably won’t lead to a major rebranding of the pigeon as an urban darling. They are, after all, the feral descendants of domestic birds that escaped. For many people, Jerolmack says, they don’t even count as “real wildlife.” Still, their image may at least soften. “I think that pigeons will look more like other animals that, historically, we have liked and had more affection for,” he says. “And that could lead to people at least having a little bit more tolerance for them.”