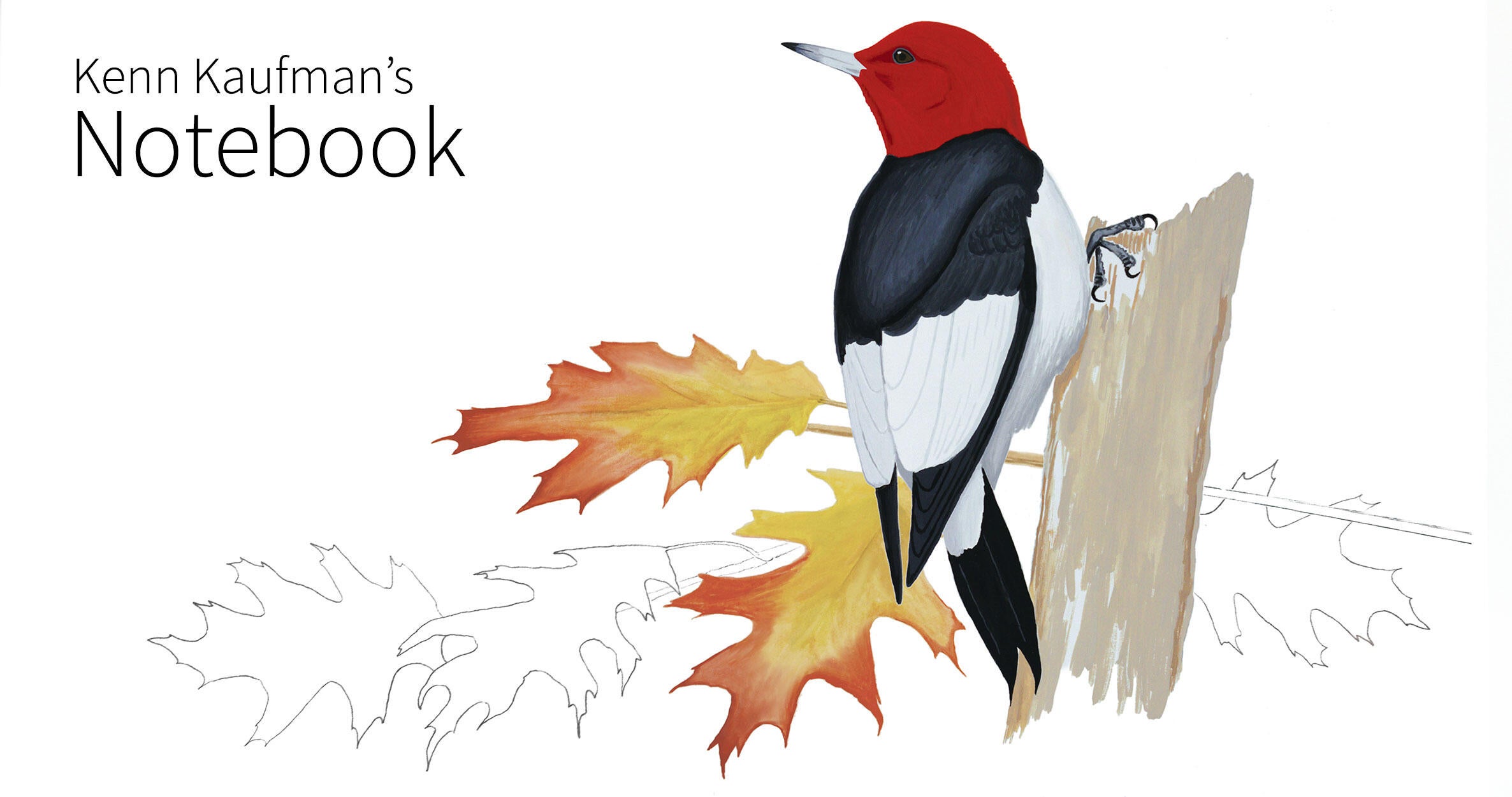 It’s popular and unmistakable. But why is this bird in decline, and why are its habits so hard to understand?

Most woodpeckers have some red on their heads. But the genuine Red-headed Woodpecker is unmistakable when you see it, and unforgettable. I’ve met dozens of birders whose interest began when they saw one of these flashy creatures for the first time, making it an unparalleled “spark bird.”

Its bold color pattern and bold behavior, swooping about conspicuously in the open, seem to impress everyone. In the Black Hills region of western South Dakota and eastern Wyoming, both the Cheyenne and Lakota tribes admired this bird. They disagreed about what it represented—great power, male fertility, or strong family ties?—but they agreed that it was important. And they had plenty of chances to observe it. Naturalist George Bird Grinnell, visiting the Black Hills region in 1874, wrote: “All through Dakota, wherever there was timber, I saw the red-headed woodpecker, and in the Black Hills it was especially abundant. It seemed to me the most common species there, and its harsh cries resounded through the forest from morning till night.”

I visited the Black Hills about 100 years after Grinnell. In the 1970s, Red-headed Woodpeckers certainly were not the most common birds there, and in fact they seemed rare all over the region.

This disappearance wasn’t just limited to the Black Hills. These woodpeckers have gone through a long population decline all over their range. The species is widespread east of the Rockies, and historically it was abundant in the Middle Atlantic States and the Midwest. John James Audubon, with his penchant for startling phrases, wrote about Red-headed Woodpeckers in the 1830s: “It is impossible to form any estimate of the number of these birds seen in the United States during the summer months; but this much I may safely assert, that a hundred have been shot upon a single cherry-tree in one day.” Fortunately, no one is shooting them out of cherry trees anymore, but seeing a hundred in a day would be impossible in most parts of their range.

On a local level, population levels of Red-headed Woodpeckers can go sharply up or down. Overall, though, the trend is downward. An analysis of Breeding Bird Survey data suggests that the total population declined by more than 60 percent between 1970 and 2014. In my state of Ohio, the species declined by 75 percent in roughly the same time period. I can still see this bird when I want to, but I have to go to a few specific places.

But why? Why are Red-headed Woodpeckers now so uncommon and so localized in their distribution?

Based on their food habits, we might expect them to be everywhere. They are considered the most omnivorous woodpeckers in North America, feeding on an incredible variety of insects, nuts, fruits, seeds, and occasionally such prey as lizards, mice, and the eggs of other birds. They are remarkably adept at catching insects in midair, swooping out from snags in long aerial maneuvers. They dangle from vines to pluck fruit. They gather acorns and other kinds of nuts in fall, storing them in tree crevices to feed on later, and sometimes they store insects or fruits in the same way. With such a varied diet and so many feeding behaviors, shortage of food shouldn’t be a problem.

Admittedly, food shortages have hit them in surprising ways. For example, they used to benefit from plagues of locusts. Really! In the western part of the range—such as around the Black Hills—the woodpeckers would feast during huge outbreaks of the Rocky Mountain locust. This insect has its own fascinating history: In the 1870s, some of its swarms were estimated to run into the trillions; by the early 1900s it was extinct. It was a faster and more dramatic extinction than that of the Passenger Pigeon, and no one is completely sure why it happened. But the disappearance of the locust swarms took away one irregular food bonanza for the Red-headed Woodpecker.

The loss of old-growth beech forests also damaged their food supply. At one time, abundant crops of beech nuts sustained Red-headed Woodpeckers over much of the Northeast and Midwest. Many beech forests were cleared during the 1800s and early 1900s. American beech trees are still common, but they may not produce large nut crops until they’re half a century old, so forests of younger beeches aren’t such good habitat. Still, the woodpeckers also thrive on acorns, and many eastern forests have enough oaks to produce big acorn crops.

Could the species be limited by something about its nesting habits? It’s hard to say. Surprisingly for such a popular bird, its nesting behavior hasn’t been well studied. That’s partly because its nest holes are usually in high dead limbs that are hard to reach. There are other factors, too. With most woodpeckers, researchers can watch from a distance to see how males and females divide up duties at the nest. That doesn’t work for Red-headed Woodpecker, one of the few members of the family in which the sexes look alike.

One factor that probably hurt their nesting effort was the introduction of European Starlings into North America.

One factor that probably hurt their nesting effort was the introduction of European Starlings into North America. Starlings are cavity-nesters that can’t excavate their own holes, so they’ll steal them from woodpeckers. Some studies have suggested that starlings have little or no impact on nesting success of Red-headed Woodpeckers, but I have to wonder about that. Starlings are now abundant in prime woodpecker habitat, and I’ve seen them forcibly evicting the rightful owners from their holes. And the timing of the starlings’ spread across the continent, from New York westward, would fit with an era when the woodpecker numbers declined.

At the same time that the starling invasion played out, disasters for some tree species actually helped the woodpeckers. The American chestnut tree was almost wiped out when a deadly fungal disease, chestnut blight, swept across eastern North America between about 1900 and 1940. Apparently the actual chestnuts were never major food items for Red-headed Woodpeckers. These birds benefited from the blight, increasing in areas where dead chestnut trees provided abundant new nesting sites.

When Dutch elm disease killed many of the trees across the Midwest, the woodpeckers also took advantage of those dead elms as nest sites. In Illinois, for example, Red-headed Woodpeckers went through a major increase in the 1950s after the disease swept through, and then declined again in the late 1960s after the dead elms began falling. Today, the woodpeckers are increasing in some areas as many ash trees are killed by the spread of an invasive beetle, the emerald ash borer.

And what about the Black Hills region, where Red-headed Woodpeckers were abundant when Grinnell visited in the 1870s but almost absent when I went there in the 1970s? Well, they’re back! Why? Apparently because of the Jasper fire, which burned more than 80,000 acres in August 2000. In the burned areas, the standing dead trees evidently provide the perfect nesting sites for these woodpeckers. In August 2017, for example, birders found almost 50 at one spot, an amazing concentration.

So the fortunes of the Red-headed Woodpecker can go up or down, on a local level, for reasons that we might not have predicted. We’re still a long way from fully understanding this popular bird and its long-term decline, but it’s at least good to know it has the potential to bounce back when conditions are right.