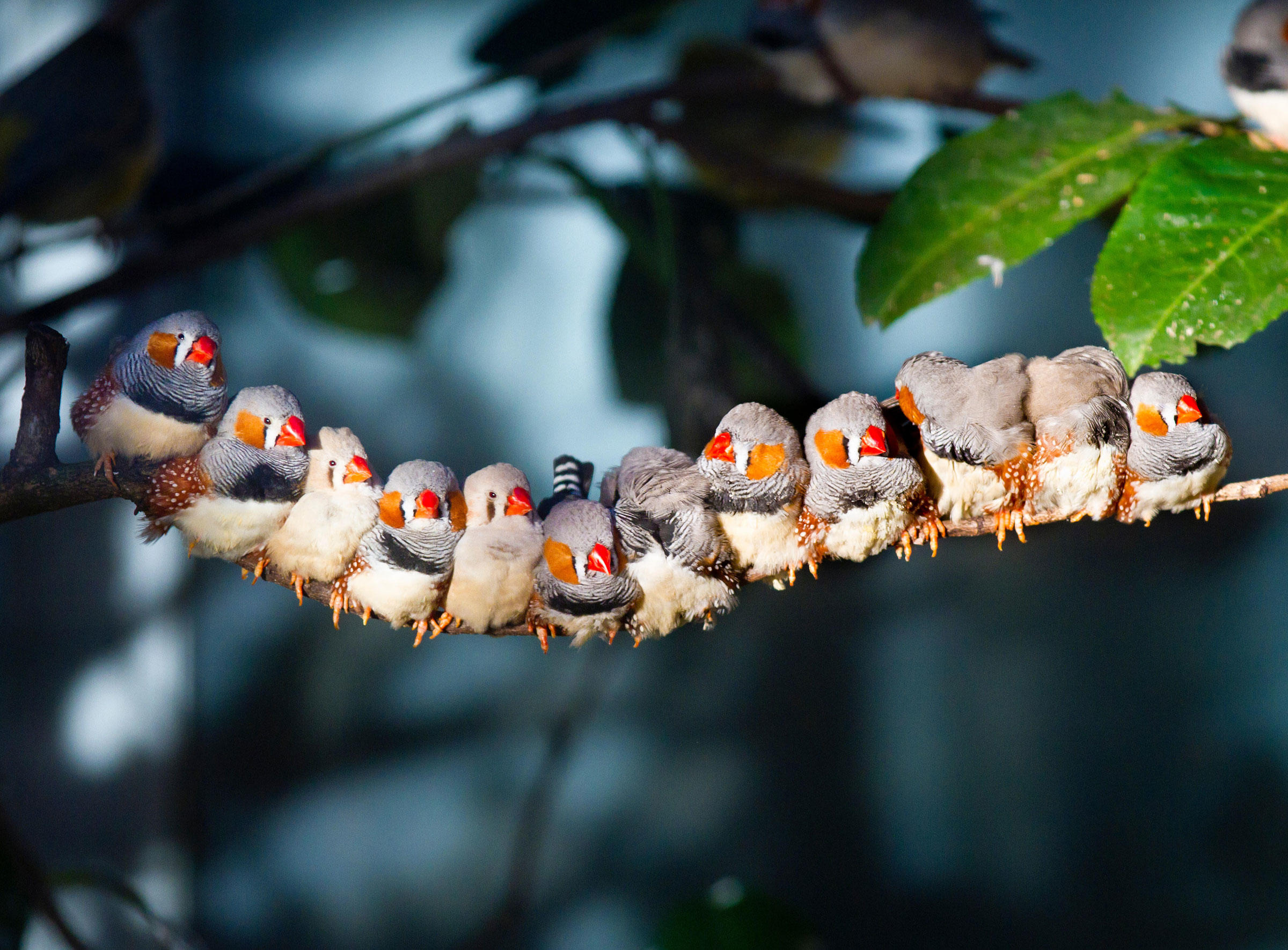 UV vision is a key ingredient to Zebra Finch attraction—and by the looks of this photo, it's pretty effective. Photo: Sagar Simkhada/Alamy

The Secret Superpower of Birds, Revealed

Researchers have figured out how some species of birds deploy UV vision.

Yes, rainbows are glorious—but from a bird's perspective, they’re even more intense. Many avian species have the ability to see a brighter version of the world, filled with a whole range of colors that we literally can’t imagine. While scientists have long known that birds like Zebra and House Finches are capable of ultraviolet (UV) vision, they haven’t entirely understood how.

A new study, published earlier this month in eLife, sheds a little more light on this ability. Researchers from the Washington University School of Medicine in St. Louis have identified the features that enable, and even correct, birds' super-sensory powers: a combination of self-calibrating cone cells and metabolocially altered pigments.

First, let’s recap the basic anatomy. In both birds and humans, there’s a thin lining of tissue in the back of the eye called the retina, which allows the brain to receive and process images. The human retina is a mosaic of three different kinds of photoreceptors, also known as cones, that are named for the colors of light they absorb: red, green, and blue. Avians have an extra, UV-sensitive cone that unlocks a huge spectrum of light hidden to human eyes. All birds have this fourth “violet” cone—but they're split into those that can see UV wavelengths and those that have “violet vision.” No species can do both.

Birds with UV vision boast a number of advantages. They’re better at foraging for food and are able to spot waxy fruits and berries that reflect UV light. They’re also better at wooing mates. The plumage of some UV-sensitive species—European Starlings, Blue Grosbeaks, and American Goldfinches, to name a few—reflect UV light differently in males than in females, helping the birds distinguish between the sexes. On the other hand, nocturnal birds such as owls retain violet vision because there’s no need to see additional colors at night.

The spectrum of light visible to the human eye includes wavelengths between 400 and 700 nanometers (nm). This covers the longer wavelengths of red (620 to 750 nm), to the shorter blue (450 to 496 nm), to the even shorter violet (380 to 450 nm). Humans aren't able to see to the very ends of the spectrum, but birds with violet vision can, making them more able to discriminate shades of violet light. Meanwhile, UV light has even shorter wavelengths, measuring from 355 to 380 nm. Birds that can detect UV have one weakness: They have a “blind spot” that leaves them far less sensitive to light in the violet range, making it difficult for them to discern colors that fall between UV and blue. This is a major disadvantage, given how strongly birds depend on their capacity of sight, says Matthew Toomey, the paper’s lead author and a postdoctoral fellow at the Washington School of Medicine.

But the new analysis found that birds solve this problem through a number of different adaptations. To figure out how they compensate for the blind spot, the researchers created computational models of avian vision, using data collected from previous studies on 21 violet-sensitive species and 24 UV-sensitive species. They then homed in on light-filtering pigments called carotenoids, which color birds’ feathers and eyes, and classified them as either violet– or UV-sensitive in each species. These stats were plugged into a model to predict how pigments affect the number of colors birds actually see.

The researchers found that species with UV vision can shift the range of their so-called blue cones to detect the shorter wavelengths of the blind spot. The violet cones also move in sync, revealing a surprisingly coordinated relationship between the two structures. “This finding is exciting because it shows this trait of UV vision relies on a complex set of adaptations, not just shifting the sensitivity of one cone,” Toomey says.

To toggle the wavelengths of their blue and violet cones, birds rely on a specialized organelle called a cone oil droplet. These droplets are pigmented with carotenoids that are picked up from food; depending on how they decide to metabolize their carotenoids, avians can absorb longer or shorter wavelengths. Think of them like Instagram filters that let birds see the world in colors of their choosing.

UV vision does come at a cost though. “One of the reasons we think we see this variation among bird species is that UV light is damaging to the retina,” Toomey says. Plus, as the wavelengths moves through various media, they can end up with chromatic aberrations, leading to distorted or fuzzy images. Toomey says this pitfall might explain why most UV-enabled birds have small eyes—the bigger the surface, the more room for error.

Eventually, Toomey wants to identify the enzymes that are responsible for generating the "filters." From his point of view, avian eyesight is the perfect model to answer the fundamental questions of evolution. His vision for the field is looking bright—even if he’s only got three cones.

The National Audubon Society is a nonprofit that depends on readers like you. For more stories like this, please consider making a donation today.