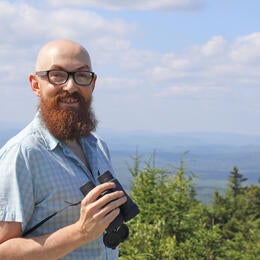 The largest wading bird in North America and our only native stork species, the Wood Stork is an icon of the American Southeast. Wading through shallow freshwater cypress swamps, marshes, and lagoons, it is unmistakable, except when flying overhead, where it superficially resembles the American White Pelican. Like the pelican, Wood Storks are excellent fliers, soaring well and regularly observed high overhead on warm days, riding thermals. But, unlike the American White Pelican, the Wood Stork is not a migratory species in the traditional sense. Until recently, researchers defined Wood Storks as not true migrants. But our understanding of Wood Stork movements has changed. Researchers now know they are partially migratory, and like other wading birds, wander widely in response to local environmental conditions, which vary year to year.

This response, paired with their specific habitat requirements, makes Wood Storks an ideal ecosystem indicator for the health of our southern wetlands, including the Everglades. By deploying GPS tracking tags, researchers have been able to study their movements, resulting in data that can help scientists measure the health of the systems storks inhabit, including any impacts of climate change on our wetlands. Dr. Simona Picardi is one such researcher whose quantitative skills have helped shed light on the movements of these large waders across the Southeast. What she learned is both interesting and full of implications for the survival of Wood Storks and even the Everglades.

Hailing from Italy, Picardi, who specializes in quantitative analysis methods for movement and tracking data, cut her analytical teeth studying roe deer at the University of Rome for her master's degree. When an opportunity arose at the University of Florida to analyze the movements of Wood Storks, Picardi moved to the United States in 2015. For her Ph.D., Picardi worked on an existing Wood Stork tracking dataset containing the movements of 133 storks captured across the Southeast between 2004 and 2012. What made this dataset so special is the Wood Storks were outfitted with solar-powered GPS tags, resulting in tracking not limited by battery power or location, the usual constraints of a tracking study’s duration. As a result, researchers obtained a long-term dataset of stork movements across the Southeast, with one individual eventually tracked for eleven consecutive years.

This research, the first of its kind, which Picardi and colleagues published in the open-access journal Ecosphere, shows that Wood Storks are partially migratory, which researchers never formally quantified before. However, like many things in ecology, tracking data can be hard to categorize, something Picardi was quick to note.

“For the movements of Wood Storks, it turns out it's a gradient between residency and migration. There are so many more shades of the behavior between these two extremes than previously realized.” She goes on adding “Not only are some storks year-round residents in South Florida while others migrate through the Southeast, but we also found that some individuals, juveniles and adults alike, change their strategy year to year. So, for Wood Storks, their strategy at a population level is both partial and facultative migration.”

Picardi clarifies, suggesting different responses probably reflect different strategies that are needed due to changing conditions throughout the range, “We think that partial migration is a bet-hedging strategy that makes ecological sense in the super unpredictable environment of the Everglades or any wetland. By having individuals who do different things in an unpredictable environment, some individuals will likely be successful each year, enabling populations to persevere.”

But determining that Wood Storks are partially migratory across the Southeast does not paint the entire picture for Picardi. “What I want to know is, does residency versus migration impact fitness?” She goes on to note that the landscape around Wood Storks is drastically changing and has been for the past century, to which Picardi asks, “Are Wood Storks going to respond to these changes? Will they persist?” It seems continued tracking of Wood Storks could reveal this in time.

The changes to the Everglades and the region's hydrology referenced by Picardi have driven Wood Storks to decline as breeders in the Everglades and to expand their breeding range across the Southeast as they seek out new habitats. With food sources critically tied to the hydrology of the Everglades, Wood Storks, a tactile feeder requiring specific conditions, experienced steep declines during the 1940s as a network of canals that humans implemented to make South Florida drier and thus more easily developed, disrupted the hydrology of the area. Responding directly to the altered hydrology of South Florida, Wood Storks during the 1970s expanded their breeding range northward throughout the Southeast. Thankfully, there was a slow rebound during the 1960s and 1970s, which according to Picardi, is why she wanted to look at fitness, to see if there may be a change going on in Wood Storks. “Given the drastic changes of the past century, I was interested to see if migration patterns are emerging because of environmental change.”

Surprisingly, Picardi’s study holds many titles as it was the first to look at partial migration in a wading bird in the Southeast, and the first to give such a comprehensive picture of annual individual movements in any wading bird in the US. Moreover, she adds, “Wading birds are one of the most understudied groups of birds in this sense.” A fact Picardi finds interesting given that the size of wading birds lends themselves perfectly to tracking studies. She adds, “Wading birds are a fascinating group of species that are good models for studying partial migration due to living in unpredictable habitats such as wetlands.” Picardi suspects that as other wading birds are tracked, similar results might be observed.

Picardi and colleagues also demonstrated that not all tracked individuals stayed within the United States. In a study published in the peer-review journal Caribbean Naturalist, they provided results of two Wood Storks migrating from Georgia and eastern Mississippi to Mexico. One individual, a juvenile, remained in Mexico for the subsequent four years into adulthood. This study presented evidence of potential mixing between the United States and Mexican/Central American populations of Wood Storks, which was previously not documented via tracked birds. Understanding the degree of genetic mixing has important implications for the conservation of populations.

With conservationists and decision-makers often using research results on storks to guide management, Picardi confirms that Wood Storks are essential indicators of the health of the Everglades and the wetlands of the Southeast. However, Picardi <span class="NormalTextRun SCXW2427732