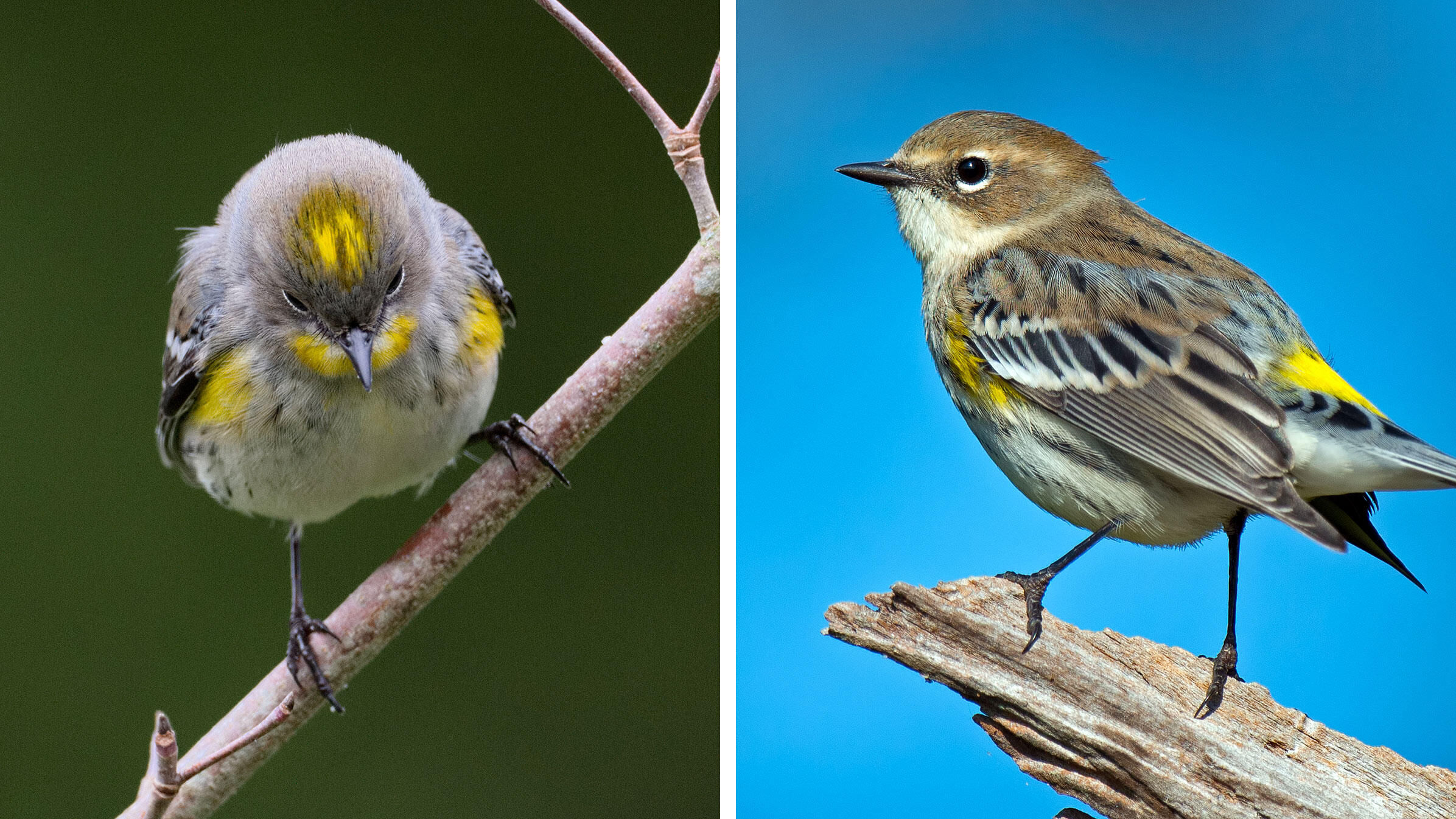 It was a long time ago, but I still remember how bummed we all were when we lost the Myrtle Warbler.

I was a kid then, an avid teen birder. Everywhere I went in April 1973, people were talking about the birds we had lost. The Checklist Committee of the American Ornithologists’ Union had just published their first update in years, and for bird listers, the news wasn’t good. Scientists had “lumped” many familiar species. Three flicker species had been merged into one, two orioles into one, and four juncos into one. And the eastern Myrtle Warbler and western Audubon’s Warbler, two of the most common and familiar members of the warbler clan, were suddenly one species with the bland, unflattering name of Yellow-rumped Warbler.

It didn’t come as a complete surprise. Ornithologist John Hubbard had studied these warblers exhaustively and had published his results in 1969. Even though Myrtle and Audubon’s warblers were consistently different across their wide ranges, their breeding ranges met in a narrow zone in western Canada, and there the separation broke down. The two types seemed to interbreed at random without regard for the differences that seemed so obvious to birders. By the standards accepted at the time, they had to be the same species.

So we adjusted. We could still tell the two kinds apart—hybrids made up only a tiny percentage of the population—and we noted them with awkward names like Audubon’s Yellow-rumped Warbler or Yellow-rumped (Myrtle) Warbler. Field guides continued to illustrate the two forms, and Audubon Christmas Bird Counts still allowed us to keep track of them separately.

Now that extra work might pay off, because the warblers could be split again. The study of how we define what is or isn’t a species has made great advances since 1973. We can go far beyond mere appearance and sounds, looking deep into the genetics of similar birds. One researcher who has made full use of these techniques is Dr. Darren Irwin of the University of British Columbia. In the Irwin Lab at UBC, he and his students have revolutionized our understanding of many species pairs that meet in western Canada. (For example, their work led to the splitting of Winter Wren and Pacific Wren as two different species in 2010.) It was inevitable that they would revisit the Yellow-rumped Warbler question, and in fact, they’ve published a whole series of studies on them in recent years.

The most recent of these, by David Toews and others, has just been released. Toews and company took a very detailed look at the genetics of Yellow-rumped Warblers. The result? Even though the white-throated Myrtle and yellow-throated Audubon’s types interbreed where they meet, they’re very distinct genetically throughout the rest of their range. The evidence suggests that each is a full species.

This gives birders even more reason to take a second look at birds that we should never dismiss as “just another Yellow-rump.” Myrtle and Audubon’s warblers are both fascinating birds, hardy and adaptable, able to spend the winter farther north than any other warblers. (Check these range maps to see just how far north.) Both migrate early in spring and late in fall, before and after the flood of other migrating warblers, when there are fewer leaves on the trees and birds are easier to see. Both are remarkably varied in their feeding habits: They’ll seek insects by clambering on tree trunks, dangling from twigs, hopping on the ground, or flying out to catch them in midair. And when insects are scarce, they switch over to feasting on berries

They mostly divide the Lower 48 by east and west, but Myrtle Warblers have such a broad breeding range that they can appear as uncommon migrants throughout the western states, and they’re locally common in winter along the Pacific Coast. Seeing Audubon’s Warblers in the east is less frequent, but they do wander, showing up as rare visitors anywhere in the eastern states. And if they count as additions to birders’ lists, more people will be actively looking for them.

Now, here’s the kicker. The Yellow-rump complex won’t just be split into two species—there are probably three, or even four. The other ones live south of the border. Goldman’s Warbler, in the mountains of Guatemala, has been considered a part of the Audubon’s Warbler group, but it’s strikingly darker and very different genetically. And then there’s a problematic bird called the Black-fronted Warbler, of the mountains of northwestern Mexico. It looks a little darker than Audubon’s, and its genetics are somewhat different—but maybe not enough to make it a full species. Even the most detailed DNA analysis doesn’t always give a clear-cut answer. In the most recent study, David Toews and his coauthors looked at all the same data and couldn’t agree on whether the Black-fronted Warbler should be split from the Audubon’s. More study is needed.

But the evidence looks good for Myrtle, Audubon’s, and Goldman’s warblers to be separated. This news doesn’t mean it’s time to break out the checklist and start adding numbers, though. The split won’t be official until it’s accepted and published by the AOU Checklist Committee.  Annual AOU supplements are published in July, so the earliest this could happen would be July 2017. In the meantime, savvy birders would be wise to spend a little more time looking at any Yellow-rumps they encounter.

(Kenn Kaufman is the field editor for Audubon.)