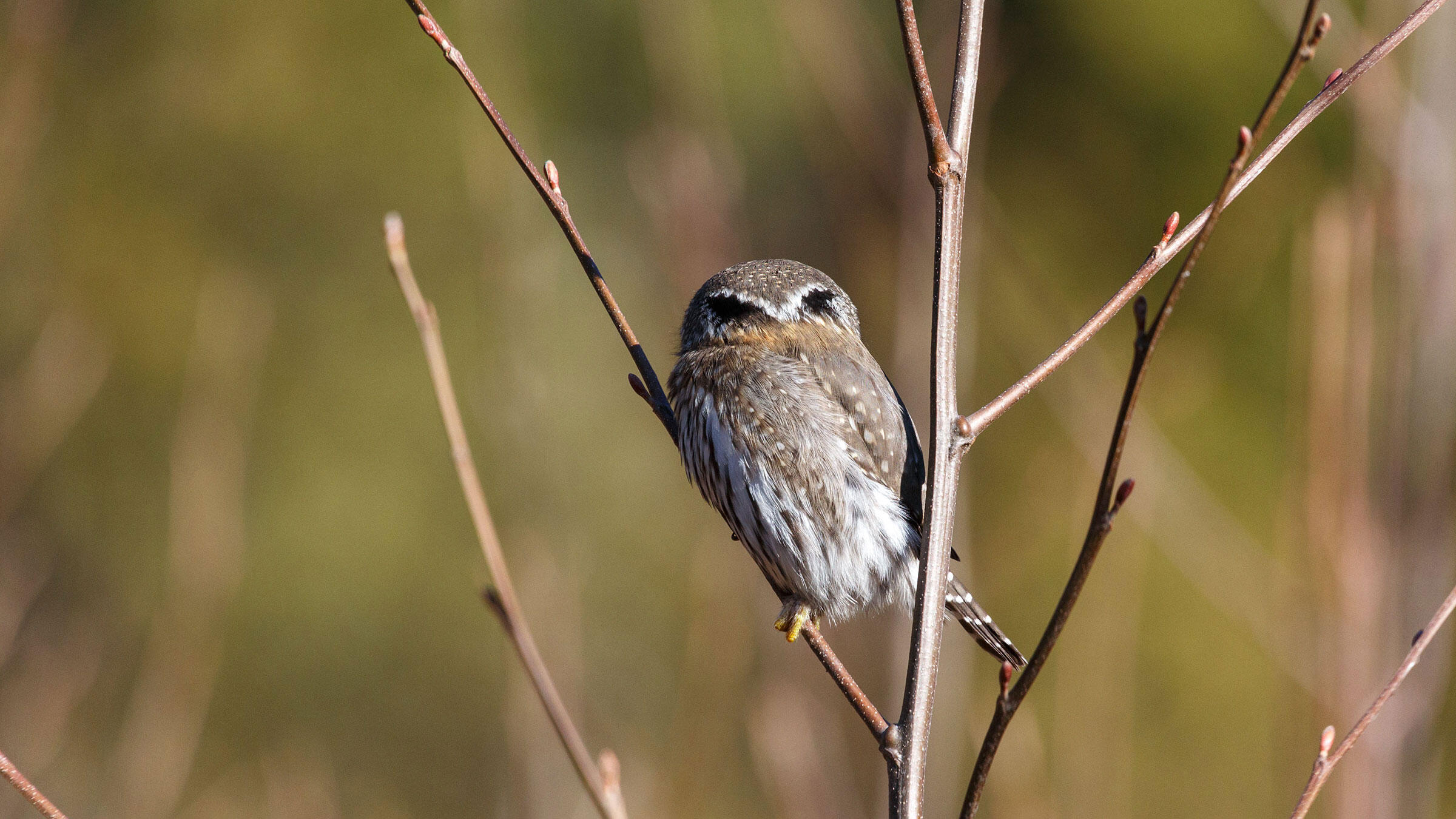 Northern Pygmy-Owls, like this one, are ruthless songbird hunters. The owls cache any extra food in tree cavities or hang it from thorns to save for later. This behavior seems fitting of a bird with such unnerving fake eyes. Photo: Feng Yu/Alamy

With feathers that look like eye spots, some falcons, hawks, and owls are always watching. 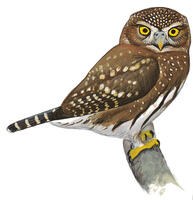 The miniature owl, only half a foot tall, squeaks a high-pitched 'toot,' which sounds rather like a child's toy, from a tree. Its dark eyes, fringed with white feathers, stare down at you menacingly. Then the bird swivels its head, and bright yellow eyes blink from the other side.

What gives? Does this owl really have two pairs of eyes? Alas, no, you were just tricked: The first set of feathered “eyes” were decoys.

This trickster, a Northern Pygmy-Owl, is part of a group of owls, hawks, and falcons with deceptive eye patches, called ocelli, on the backs of their heads. Dozens of raptors sport these markings. American Kestrels' black spots mirror their actual eyes, for example, and two symmetrical light spots gaze out from Taita Falcons' dark feathers.

For creatures typically thought of as prey, like moths or small fish, false eyespots can confuse and deter would-be predators. But eye-spotted raptors are predators. Why do they need this kind of diversion? Many have a penchant for eating songbirds, and songbirds will fight back against an owl or hawk. The leading theory is that these eyespots serve as self-defense not from predators, but from their own prey.

When songbirds sense an owl or falcon in their midst, different species team up to “mob” the threat, screeching loudly while dive bombing the predator. While rushing the enemy might seem a strange move, scientists think the birds do this to chase the raptor away from nests holding eggs and young, act as an alarm to area birds, and teach chicks and juveniles about the predators. Mobbing birds will even go so far as to physically attack the raptors, causing distress or injury.

False faces can redirect these mobbing birds, or so the theory goes. Scientists tested this by setting out dummy owls, some with false eye patches and some without. Many dive-bombing songbirds seemed confused by the large, looming "eyes," and began attacking the front of the decoys. This shows the fake eyes might protect the raptor from attacks from getting stabbed in the back, according to a 2003 study in the journal The Auk.

Kenn Kaufman, field editor at Audubon magazine, agrees that false faces could protect the avian illusionists by encouraging angry birds to keep a slightly greater distance. Ornithologist David Sibley takes it a step further: He's found in his own observations that birds seem less likely to attack if they think they're being watched.

“Researchers who venture into gull and tern colonies are subject to dive-bombing attacks from the birds,” Sibley wrote in an email to Audubon. “The birds always attack from behind, and veer away if you turn to look at them, so researchers sometimes wear masks (of human faces) on the backs of their heads to fool the birds. These false faces are apparently very effective at preventing attacks.”

Sibley thinks more birds than we realize might sport false face plumage to deter would-be predators or mobbers. For example, he's proposed the lines on a Downy Woodpecker's back or a White-throated Sparrow's head imitate a face and make it difficult to know which way a bird is looking.

Perhaps some raptors know the mask trick, too. Whatever the reason for their false faces, these five species are among the dozens of owls, hawks, and falcons that are always watching.

These little owls have textbook ocelli, with two large, black ovals surrounded by white feathers giving the strong impression of a sinister face. At just half a foot tall, these owls are some of the smallest in North America. Unlike most of their owl brethren, Northern Pygmy-Owls hunt during daylight hours in pursuit of small birds, mammals, and insects. While very secretive during spring breeding, these owls can be spotted taking down songbirds at backyard feeders the rest of the year from western Canada to southern Mexico and Central America.

Like most of the 32 species of pygmy-owl, the Ferruginous sports dark fake eyespots on the back of its head. It overlaps with its northern relatives in parts of southern Texas and Arizona, where the Ferruginous are considered endangered; these tiny birds are much more common in Mexico and Central America. In fact, they are one of the most widespread small owls in the American tropics. The Ferruginous Pygmy-Owl is crepuscular, foraging during the weak daylight around sunrise and sunset, when its false eyes look extra spooky.

The American Kestrel is the smallest and one of the most common falcons in North America, and is also found in Central America and the Caribbean. Two black spots along the nape of the neck look very similar to the dark eyes on the front of the kestrel’s head. Less than one foot tall, these raptors eat insects as well as small birds, rodents, and reptiles. There are 13 kestrel species worldwide, but this is the only one in the Western Hemisphere and the only one with well-defined false eyes.

The silhouette of this medium-sized owl resembles a hawk—hence the name. The species also sports a dark V-shaped pattern on the back of its neck, forming a pretty convincing false face, says Kaufman. These owls live in the northernmost latitudes of North America and hunt during the day or at night depending on the time of year and available sunlight. Hawk owls eat small rodents, birds, hares, grouse, and ptarmigan. These birds will, very occasionally, hunt by plunging headfirst into the snow (a behavior fittingly called “snow-plunging”).

False faces aren’t limited to the New World. Take the Taita Falcon, which inhabits rocky cliff faces in eastern and southern Africa. While the other raptors on this list sport dark false eye spots, Taitas invert the color norm, with dark brown head feathers and light, rufous brown patches on the nape of the neck. These small, stocky falcons are secretive and difficult to find. From what little we know, scientists estimate Taita populations are in decline—threatened by pesticides, competition with species like Peregrine Falcons for habitat, and nest predation. Taita Falcons hunt on the wing, snatching small birds and insects out of the air.

Why the Border Wall Is a Problem For Birds, Despite Their Wings

Some can't just fly over it. And even those that can stand to lose vital habitat or gain stress.

Being a Good American Kestrel Dad Comes at a Cost

Why do male kestrels lose out to females for the best wintering sites? It goes back to their roles as breadwinners during the breeding season.

Watch These Desert Raptors Snack on a Massive Swarm of Bats