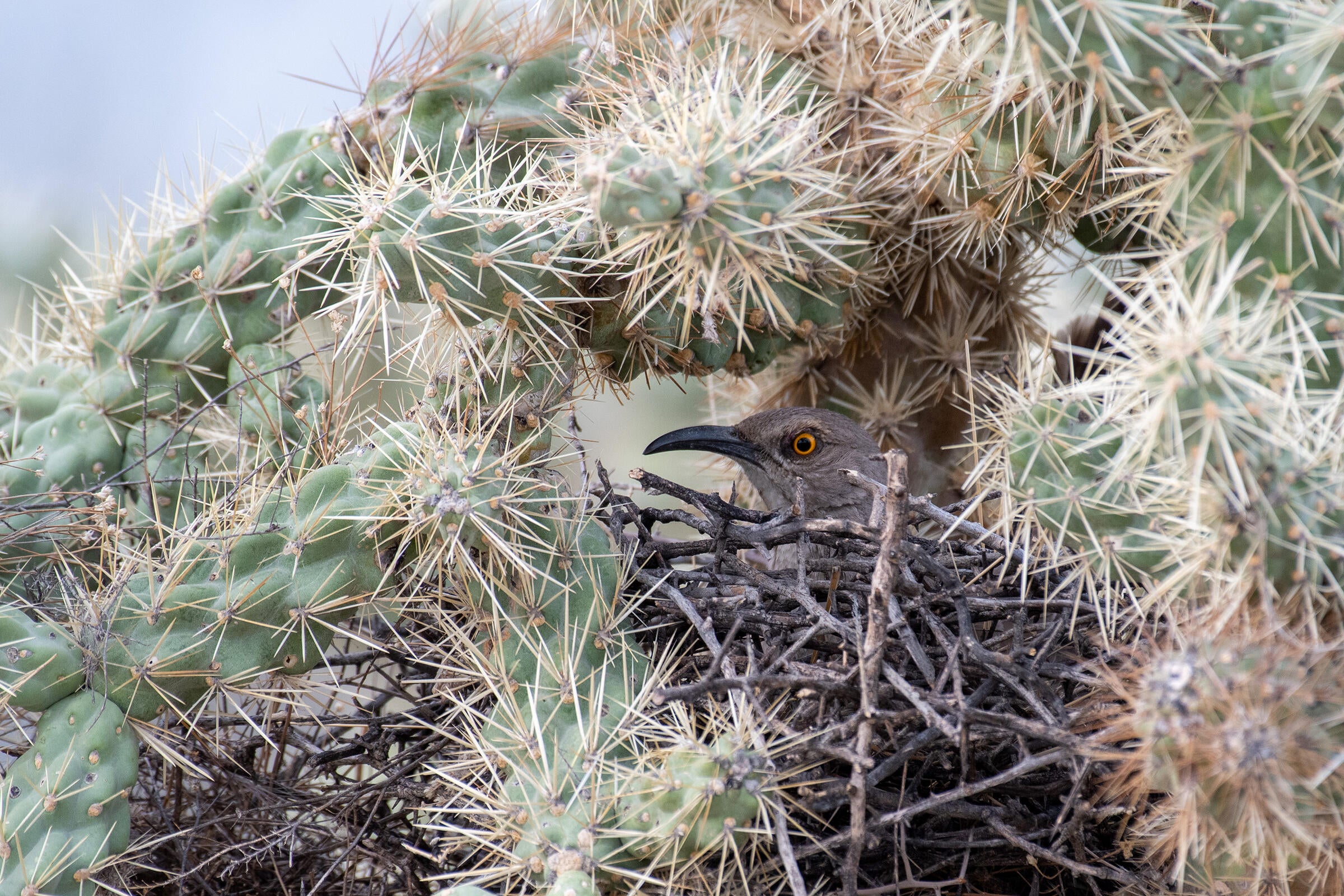 Capturing a crisp image of a bird in flight, two mates lovingly preening each other, or an intense predator-prey interaction are coveted shots for any photographer. However, photographing birds with native plants—not just any plant—offers an exciting and captivating challenge.

Launched in 2019, the Plants for Birds category of the Audubon Photography Awards aims to put just as much emphasis on the flora as the fauna in each shot—and the entries have only gotten better each year. Although the gallery of photos below didn't snag any prizes—check out the winners here and the Top 100 here—they won our hearts through the dazzling combination of birds and the native plants that support them.

Whether showcasing a thrasher tucked into its cactus abode or a bluebird plucking a berry from a stem, each photo emphasizes the important link between birds and plants native to their respective regions. Native plants provide critical food and shelter for birds and other animal species. In turn, birds pollinate plants by carrying pollen, or help disperse their seeds by dropping them while flying or through their poop. Additionally, native plants use less water and help offset climate change by storing more carbon dioxide than non-native species.

As you peruse the photos below, take note of  what each plant provides for the bird—Food? Shelter? A resting site?—and learn more about the highlighted plants in the captions. If afterward you feel inspired to transform your yard or patio into an oasis for birds, check out our handy plant finder to find plants native to your neighborhood. And if you’re so inspired, consider submitting photos from your backyard to the 2022 Audubon Photography Awards, which is currently open for submissions!

Curve-billed Thrasher on Cholla Cactus (above)

A Curve-billed Thrasher sits alert in its nest tucked into the center of a cholla cactus. In the Arizona desert, the photographer watched from a safe distance as the male and female thrashers alternated ferrying small sticks to build their nest. A common species in the southwestern United States, the thrasher’s curved bill—the source of its name, though the bill is straighter and shorter than other thrasher species—allows it to forage for food and nest safely in its spiny abode. Cholla cacti offer Verdin, Curve-billed Thrashers, and other desert animals respite from the sun, particularly during the heat of a hot summer day in the desert. 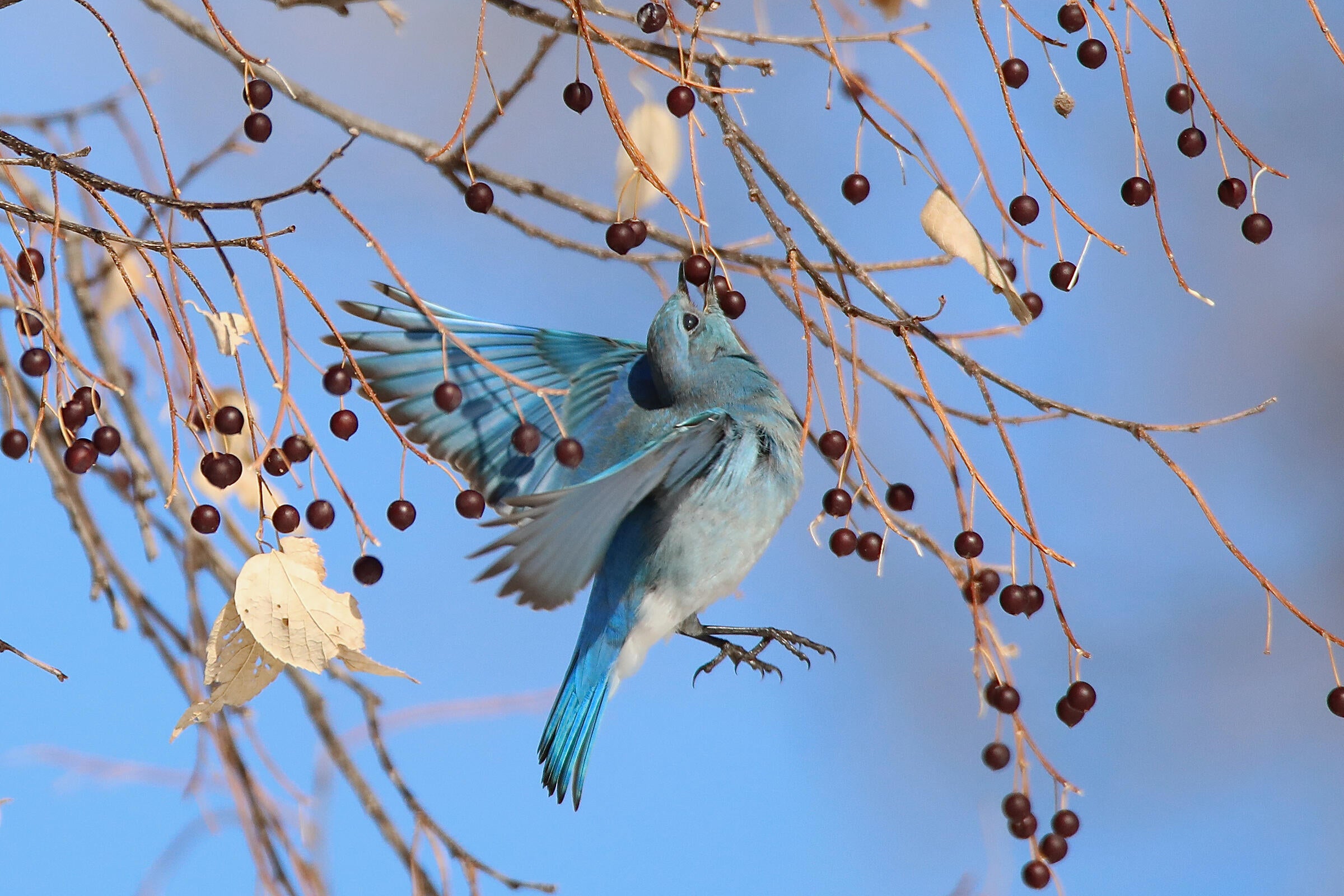 Against a brilliant blue sky, a Mountain Bluebird with outstretched wings plucks a red berry from a stem. This lone individual—a rare visitor to Minnesota, the locale of the photo— survived the winter with a group of Eastern Bluebirds, taking advantage of native vegetation. The bluebird’s chosen fruit comes from the common hackberry tree, a mid-size tree that filled a gap in the forest created when Dutch elm disease wiped out another native tree, the American elm. With a large canopy, common hackberry trees provide shade during the summer for animals and humans alike. They produce copious berries that transition from green, to purple, to reddish brown in the fall, and last through the winter, providing a much-needed meal for many birds. 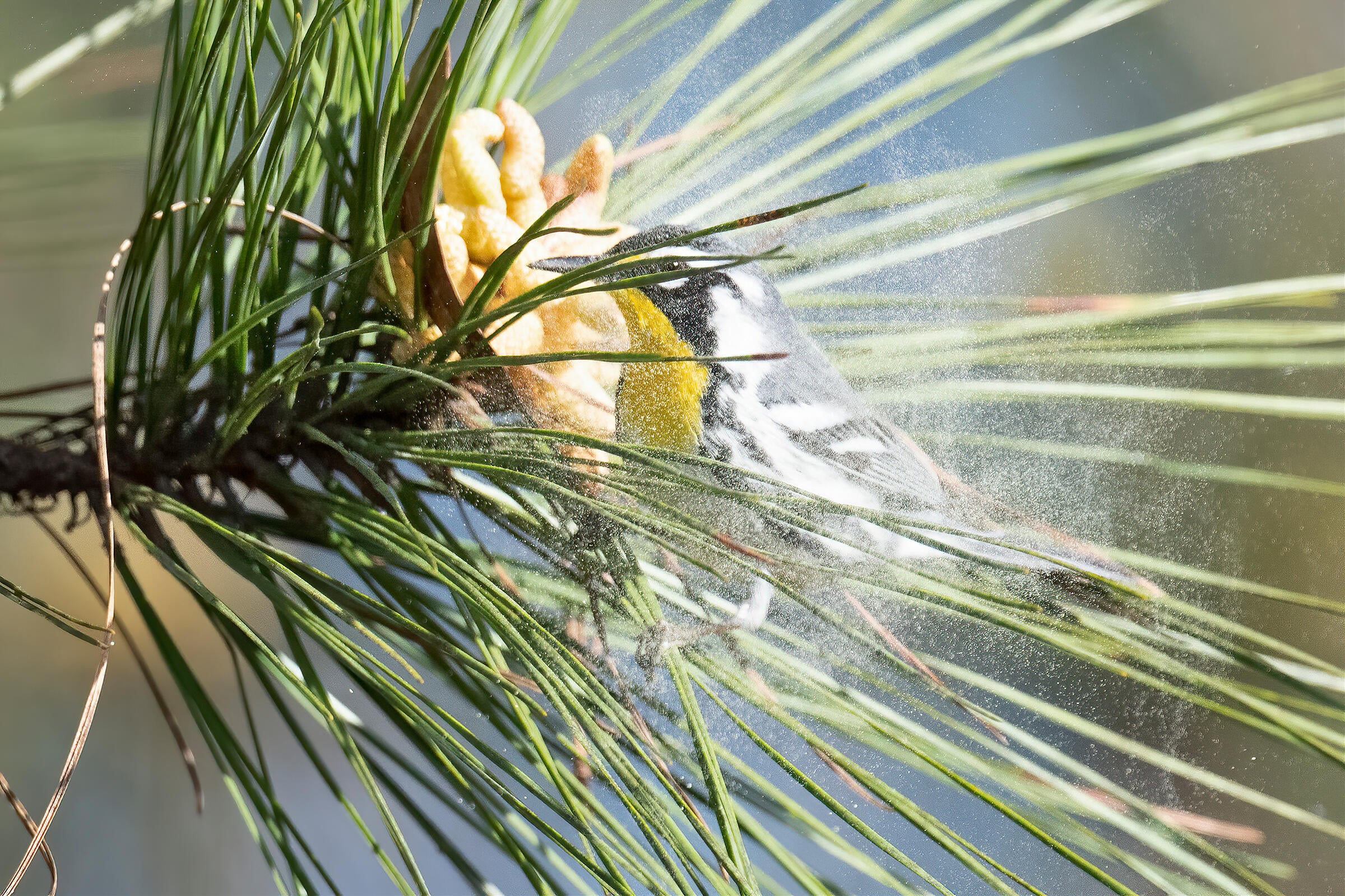 Bathed in a cloud of pollen from a loblolly pine, this Yellow-throated Warbler forages for caterpillars feeding on a loblolly pine flower. Loblolly pine grows rapidly—almost two feet per year—making it one of the most commercially important tree species in the southeastern United States. White-tailed deer, squirrels, and Wild Turkeys use thickets of loblolly pine for cover, while squirrels and chipmunks consume the hard pine seeds. Standing dead pines provide cavity nest space for a variety of woodpeckers, including the Red-cockaded Woodpecker.

The striking black and orange markings of this male Varied Thrush gleam as it stretches its neck to pluck a matching berry from a Pacific crabapple, a plant found on lakesides and streambanks throughout the Pacific Northwest coast. In the spring, fragrant, pinkish-white flowers cover the tree and offer a veritable smorgasbord for pollinators. In summer and fall, the berries deepen in color and sweeten from a tart green to orange and a more edible purple. Although much smaller than and not nearly as sweet as the modern apple, Pacific crabapple fruit make tasty snacks for bears and birds, such as Cedar Waxwings and the Varied Thrush.

Grasping a branch with its long toes, a Red-breasted Nuthatch probes for an insect tucked between the branch and a common fungus. Called a hexagonal-pored polypore, the fungus can often be found on decaying sticks and branches throughout North America. Yellowish-orange and fan-shaped, its name stems from the hexagonal or diamond-shaped pores on the fan’s underside. Inedible to birds, the fungus often provides cover for small insects—though they might not escape the tweezer-like bill of a nuthatch. 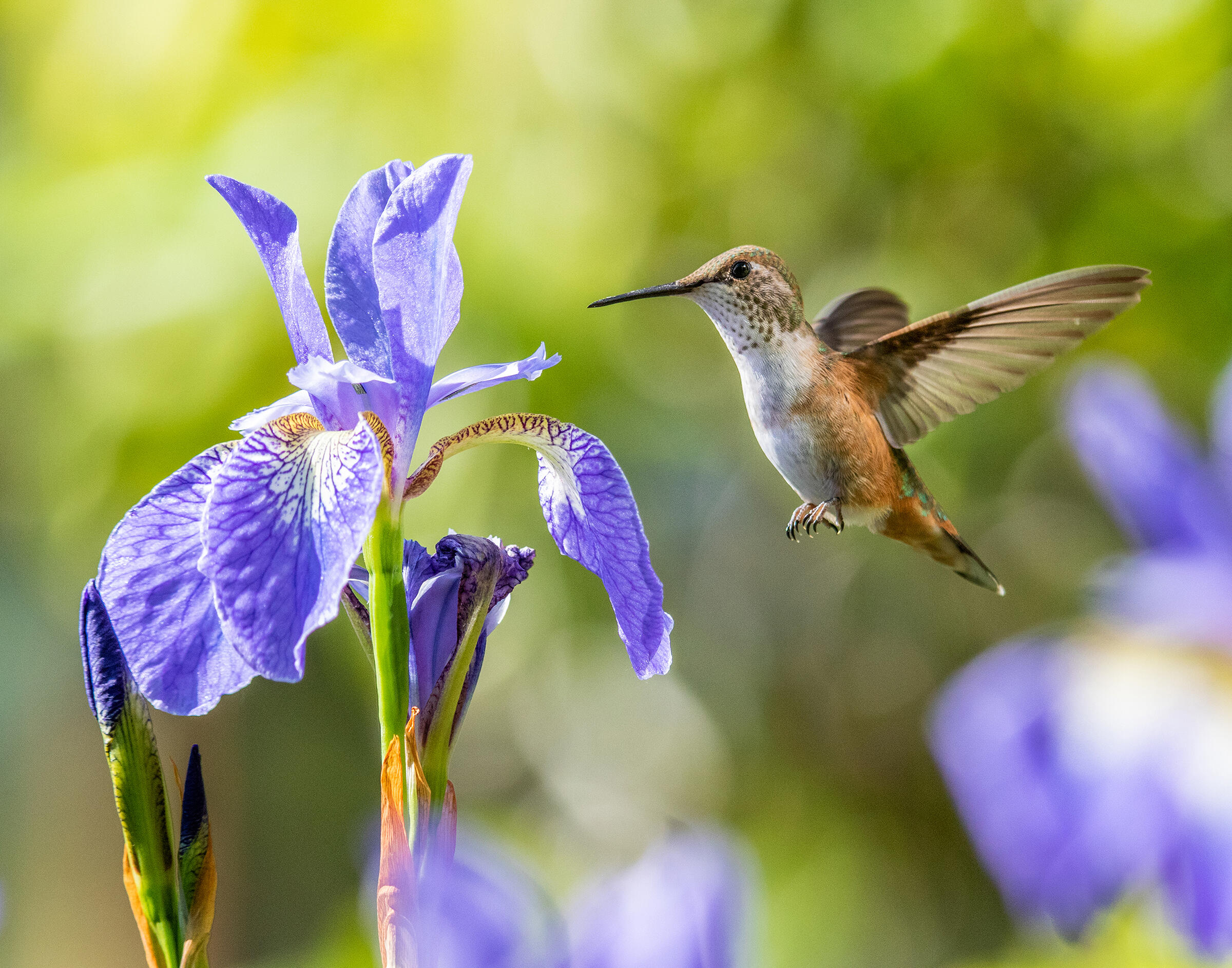 This crisp image of a hovering Rufous Hummingbird perfectly captures the bird as it prepares to extract the nectar safeguarded by the showy blue petals of the blue flag iris. A perennial, this iris encompasses five different species that grow across most of North America (Iris setosa in the photo). Blue flag irises prefer moist soil and commonly grow in clumps in marshes and wetlands. Long, sword-shaped leaves emerge from the plant’s base in spring and the purplish-blue flowers bloom during early summer. Bees and butterflies pollinate the flowers, and tiger moth caterpillars feed on iris leaves. 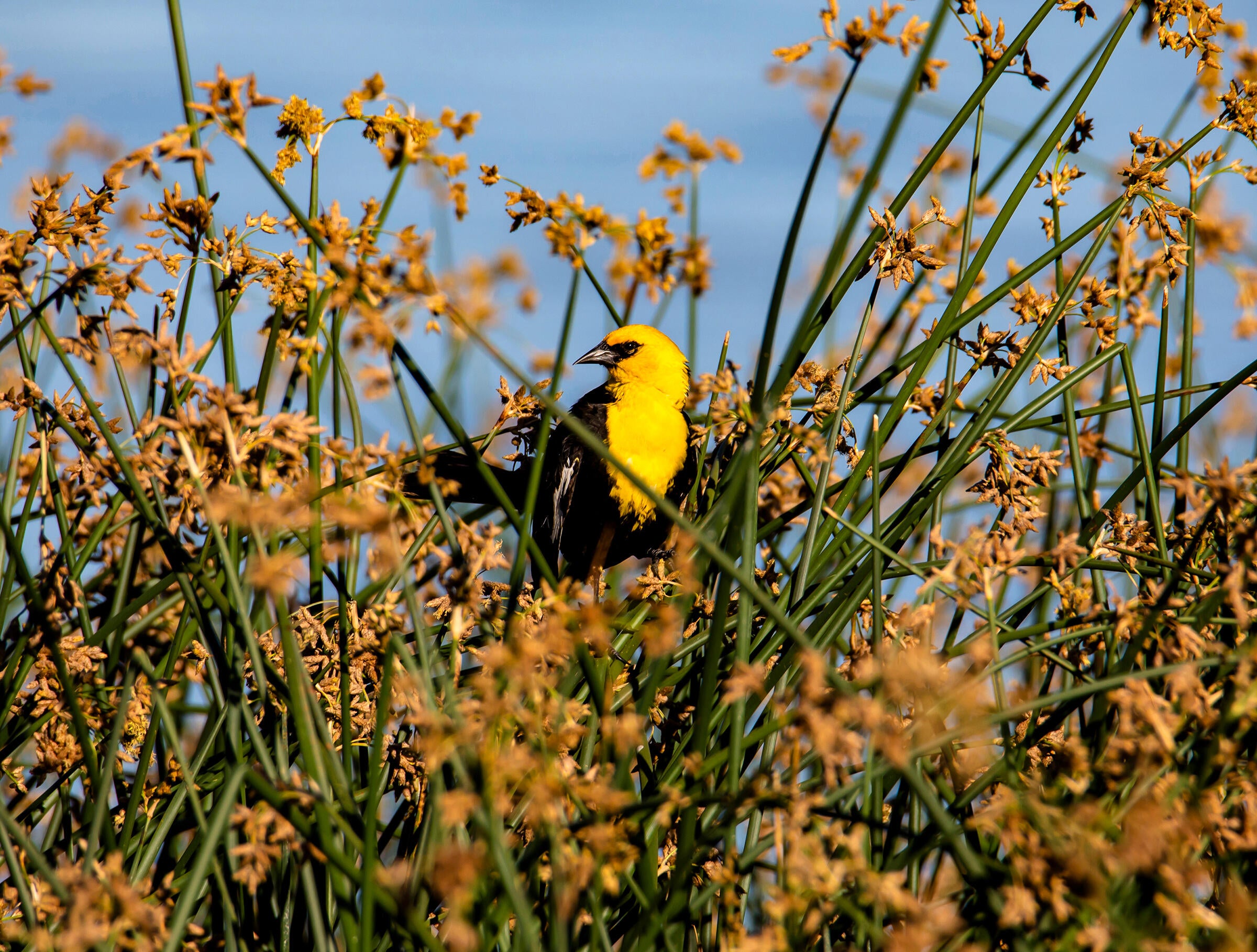 A Yellow-headed Blackbird’s flashy plumage stands out among a sea of rushes. Distinguished from sedges by its smooth, round stems—sedges have edges, remember—the hard-stemmed bulrush thrives in fresh and brackish water. The plant grows in dense clusters across much of North America, providing cover and resting sites for birds in riparian areas. Ungulates like deer or elk rarely forage from this rush, but muskrats use the stems to build their houses. Meanwhile, ducks forage on seeds that cling to the dried flower heads. 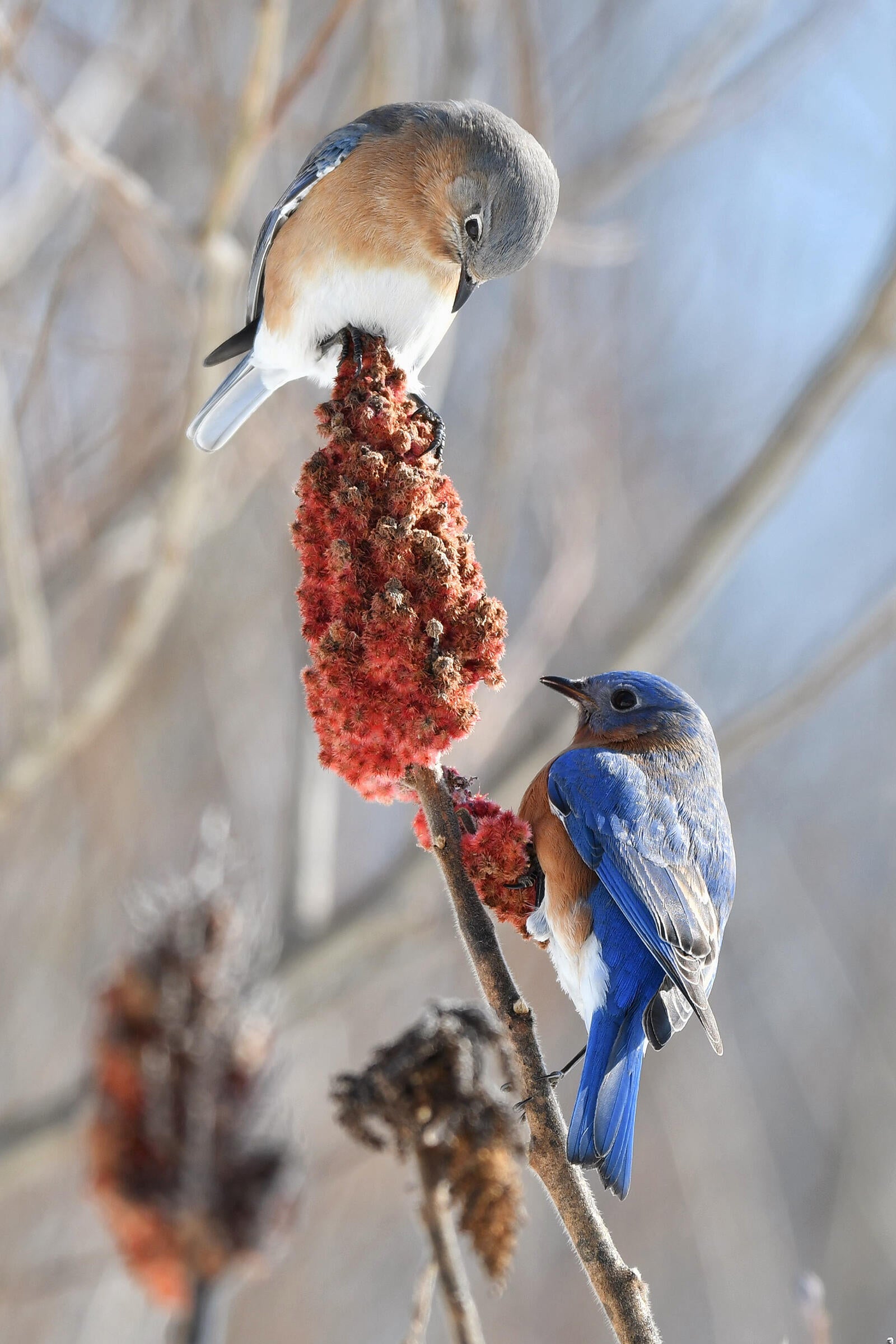 A male and female Eastern Bluebird share a cluster of seeds from a staghorn sumac, a plant native to the eastern United States. Staghorn sumac is a member of the sumac, or cashew, family, which includes cashew, poison ivy, pistachio, and mango. Resembling the velvet on a male deer’s antlers—how the tree gets its name—velvet reddish-brown hairs cover newer branches of staghorn sumac. Often seen on roadsides, staghorn sumacs have medium-size leaves that turn brilliant red hues in the fall. The species has male and female individuals, so only the females produce the yellow-green flowers and the clusters of bright, red berries. As shown in this image, the berries and their seeds persist throughout winter, providing an important food source for Eastern Bluebirds and other birds. 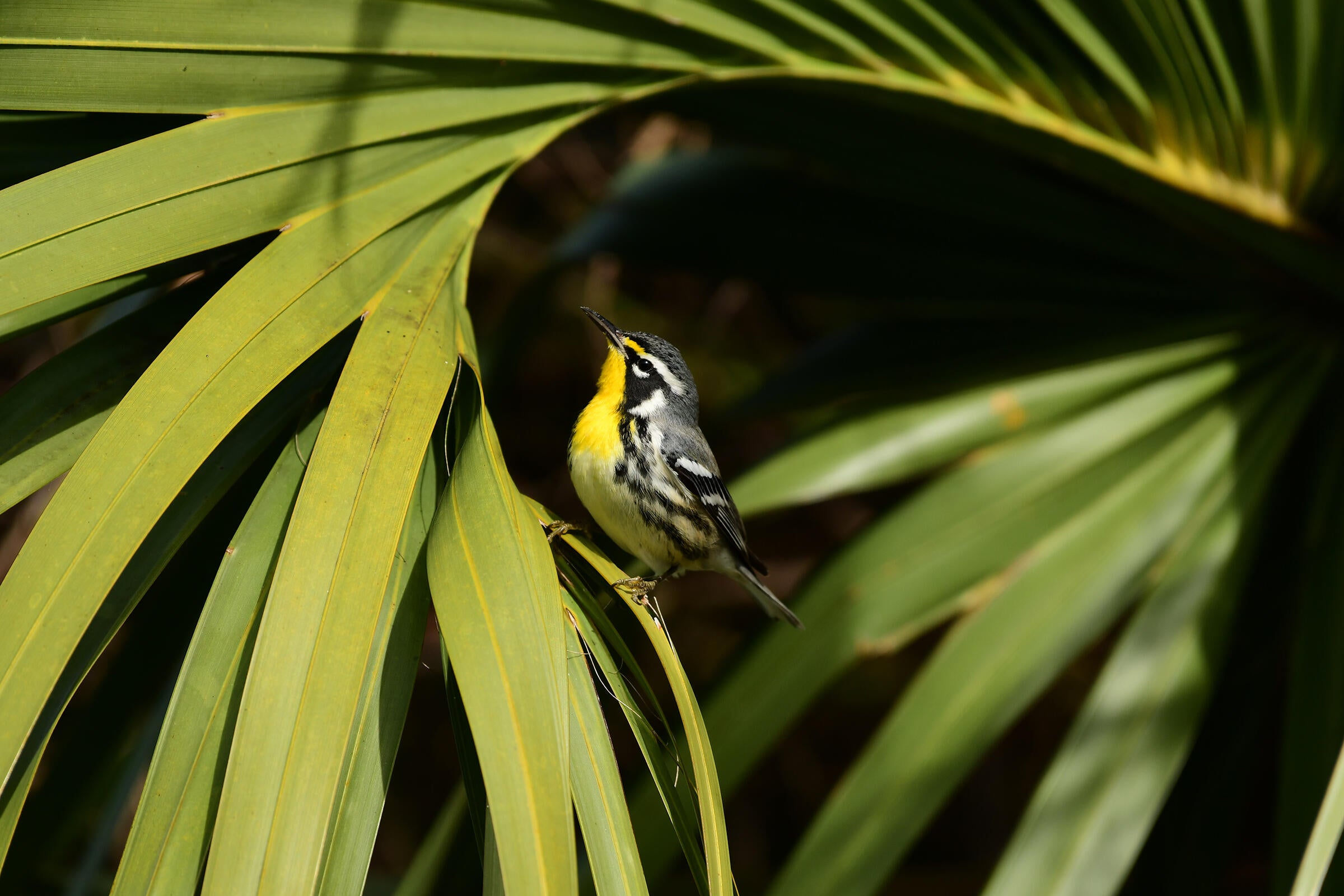 A Yellow-throated Warbler rests on the leaf of sabal palmetto, framed in the arc of its green frond. Sabal palmetto, also known as cabbage palmetto, is a popular native plant for landscaping in the southeastern United States and Caribbean Islands. Commonly found along the Florida, Georgia, and Carolina coasts, the hearty palm can withstand regular salt spray and flourishes in warm temperatures and humid weather. Bees pollinate the fragrant, white flowers that grow in long, drooping clusters in the summer. Fish Crows, Blue Jays, and Northern Cardinals eat the black, fleshy berries that emerge in the fall. 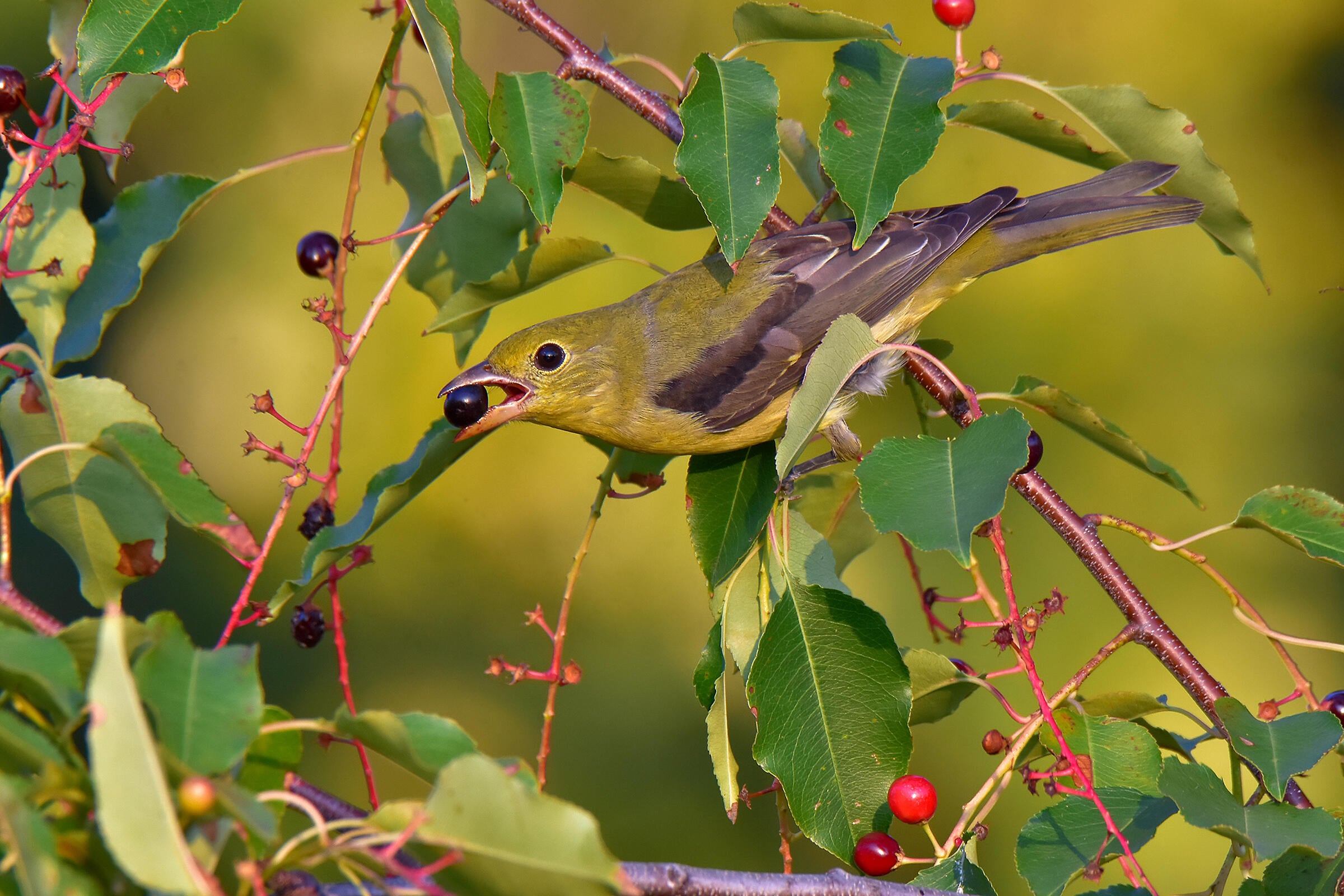 Here, the dark fruit and bright red stems of a black cherry tree steal the spotlight, while the non-breeding male Scarlet Tanager blends into the similarly-hued yellow background. A lover of strong sunlight, this tree native to the east coast of the United States can grow up to 80 feet tall. Early spring welcomes dainty, white flowers followed by deep purple fruit in late summer. Black cherry trees provide a bountiful crop of berries for many birds, including Ruffed Grouse, Wild Turkeys, Eastern Bluebirds, and Cedar Waxwings. The fleshy fruits envelop a tough seed that depends on passage through a bird or small mammal’s gut to germinate, so the tree benefits from birds eating and dispersing its seeds. 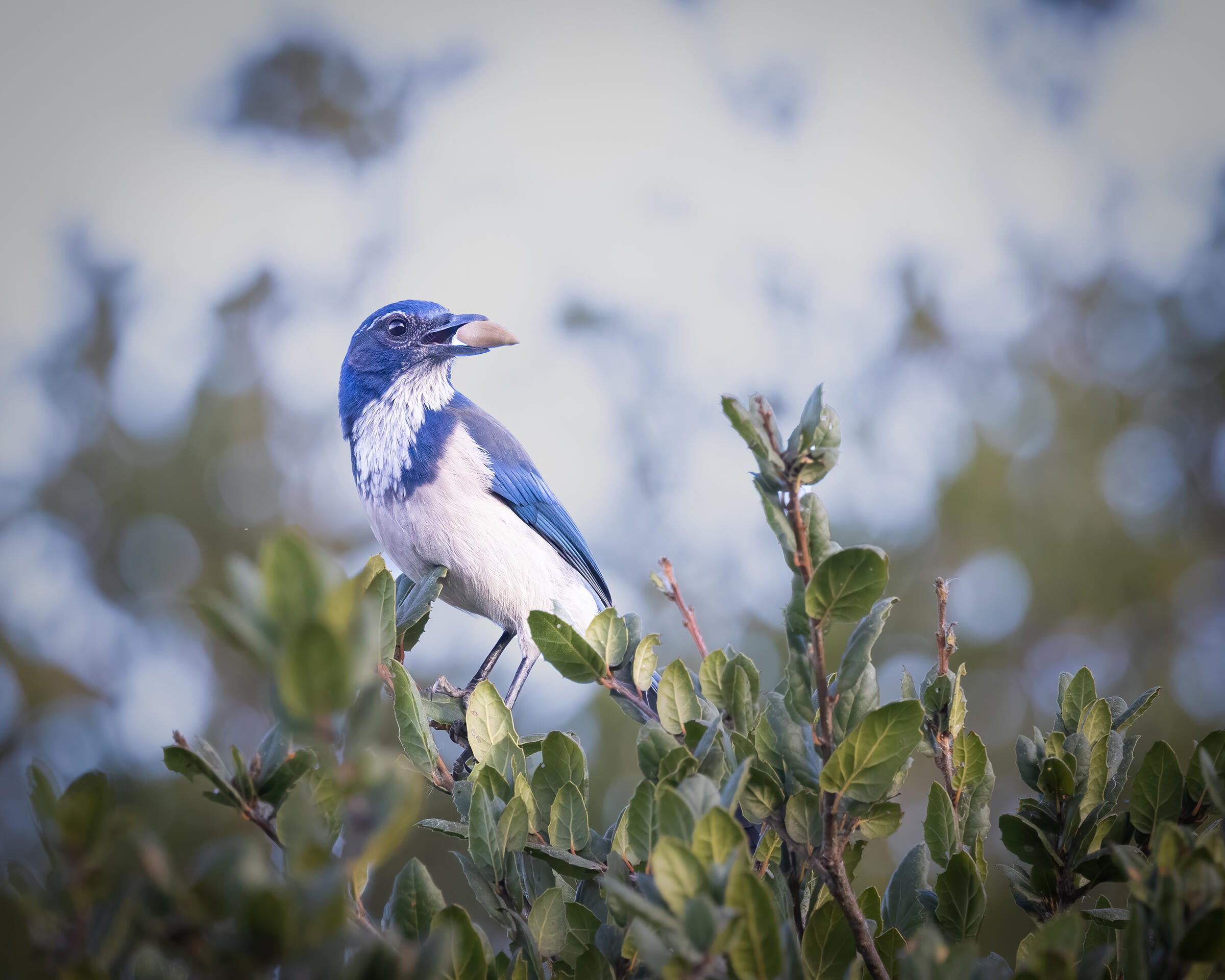 Coast live oaks—a separate species from southern live oaks—provide canopy cover and food for many species in woodland ecosystems. Here, a California Scrub-Jay, an acorn securely in its bill, perches on the stately, shrubby green leaves of a coast live oak. Acorns from this tree sustain many mammals and birds, and constitute an important food source for Native American tribes in California. The thick, leathery leaves sport tiny spines along their margins—closely resembling a holly—that help minimize water loss in drier conditions. An evergreen oak, coast live oaks only drop their old leaves when new leaves emerge in the spring. They can also resprout quickly after a fire, highlighting this species’ ecological importance as climate change intensifies wildfire seasons in California.

Against a vibrant green backdrop, the white thorns of this cholla cactus pop, drawing the eye to the splash of yellow on the Verdin’s tiny face. Captured in the act of gathering nesting materials, this Verdin will likely build two or more nests&mdash