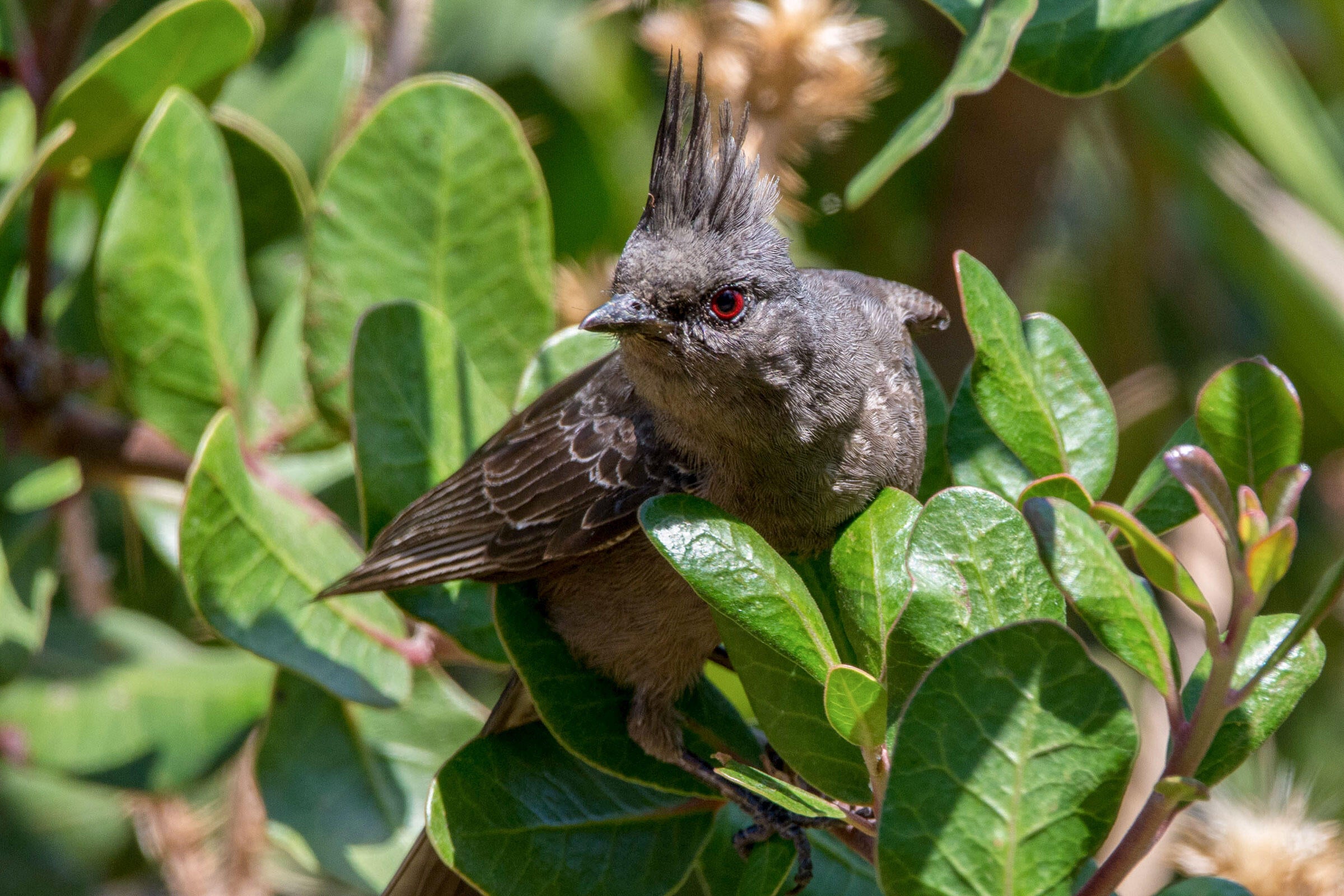 These ‘Goth Cardinals’ Don't Breed Like All the Other Birds

Scientists are finally unraveling a 100-year-old mystery about the Phainopepla's unusual nesting behaviors.

The Phainopepla is a singular bird of the Southwest. There is, for instance, the songbird’s unusual looks: With its shining black plumage, fierce crimson eyes, and punk-rock crest, the male has been likened to a goth cardinal (it’s actually a member of the silky flycatcher family). And then there is that intimidating name, which comes from the ancient Greek for “shining robes." Adding to its allure is the mystery surrounding the Phainopepla’s sex life: It’s long been suspected that the birds breed twice per year, in two completely different habitats—something only two other avian species are known to do. But proof has been elusive.

Two years ago Dan Baldassarre, an ornithologist at SUNY Oswego, set out to solve the mystery. “I’m always interested in bizarre behaviors that are sort of well-known by birders but that haven’t been poked and prodded much in an empirical way,” he says.

The Phainopepla’s breeding behavior has baffled birders since as early as the 1920s. Avian enthusiasts noticed that the birds bred early in the year in Southwestern deserts and then disappeared after their young fledged in late spring, right around the time they started showing up hundreds of miles away to nest in California’s oak- and mesquite-dominated woodlands.

Baldassarre wanted to see if these were the same birds. New evidence he and colleagues published today in the Auk strongly suggests that Phainopeplas may indeed be so-called itinerant breeders, nesting in one area in the spring, then winging it to another region to lay a second clutch in summer.

He began his investigation in the Mojave Desert, where wintering males and females stake out and defend territories around a core of fruiting mistletoe, a parasitic plant that anchors itself to trees and shrubs. When berries are abundant, Phainopeplas pair up and breed in late winter, a time when almost no other North American songbird mates. In March and April 2017, Baldassarre’s team banded, measured, and outfitted with GPS trackers 24 breeding birds. They also collected blood samples from even more breeding adults.

Banding the songbirds, which are skilled mimics, is not a quiet undertaking. “More often than not when you’re handling them, they launch into this unbelievable refrain of copying various species in a long chain,” Baldassarre says. In fact, those songs further fuel the itinerant-breeder hypothesis: Scientists have noted birds being banded in the desert incorporate the calls of forest dwellers, and vice versa. (Scroll down to hear the birds sing in two different habitats.)

By April, the Phainopeplas had finished breeding and began leaving their winter home. When they started to appear in the Santa Monica mountains outside Los Angeles a short time later, Baldassarre went in search of the birds in their summer digs, where he took blood samples from breeding adults. “It’s night and day,” he says of the contrast—not just the difference in habitats, but also the changes in the birds’ diet and behavior. In summer their gizzards more than double in size as they switch to a menu that consists largely of insects, which they catch in short, aerial sallies from tall perches. And in the woodlands, their territories are tightly packed and they become social, with up to four pairs nesting in a single tree. “The birds become much more gregarious,” says Baldassarre, foraging side by side and even working together to mob intruders such as California Scrub Jays.

The following winter the researchers returned to the Mojave Desert, where they recaptured five GPS tagged birds. Unlike satellite tags, GPS tags must be recovered in order to access the location data they’ve logged.

At long last, Baldassarre and his colleagues cracked at least part of the Phainopepla mystery: The data showed that the tagged birds had indeed migrated hundreds of miles to summer along the California coast before returning to their Arizona wintering grounds. DNA evidence further supports the hypothesis that the population is breeding in both places: Blood sample analysis revealed that desert and woodland breeders aren’t genetically different.

The findings are a major step forward in understanding the mysterious bird, says Glenn Walsberg, professor emeritus at Arizona State University, who has studied Phainopeplas since 1972; he was not involved in the study. “Baldassarre has definitively shown that the same individuals seasonally inhabit the two breeding ranges,” he wrote in an email to Audubon. “This is now inarguable.”

The Phainopeplas’ double life could give them an edge when it comes to climate change, says Baldassarre, given the flexibility they already show in surviving widely variable conditions. That adaptability might make them more resistant to future changes than other species.

Phainopeplas haven’t given up all of their secrets yet. It’s still unknown whether individual birds within a population actually breed twice a year: Because Baldassarre’s crew didn’t spot any GPS-tagged birds nesting in coastal woodlands, they can’t say for certain that they are itinerant breeders. For now, that’s something only the Phainopepla knows.

Phainopeplas are talented mimics. Hear—and see—how the birds they imitate differ in the desert and in woodlands.

This male Phainopepla was recorded when captured for banding at the Boyd Deep Canyon Desert Research Center in Palm Desert, California. Listen for its imitation of a Northern Flicker—a woodland species—amid the sounds of desert birds such as Verdin, Cactus Wren, and Loggerhead Shrike. It also copied species found in both the desert and in woodlands, such as Red-tailed Hawk and Cooper’s Hawk, as well as finches and quail.

This male Phainopepla was recorded when captured for banding in coastal woodlands at the Audubon California Starr Ranch Sanctuary in Trabuco Canyon, California. Listen for the sounds of woodland birds such as Northern Flicker, and birds that are found in both woodlands and desert such as a Red-tailed Hawk and a Mourning Dove taking flight. It also mimics a Verdin and a Cactus Wren—both desert species.