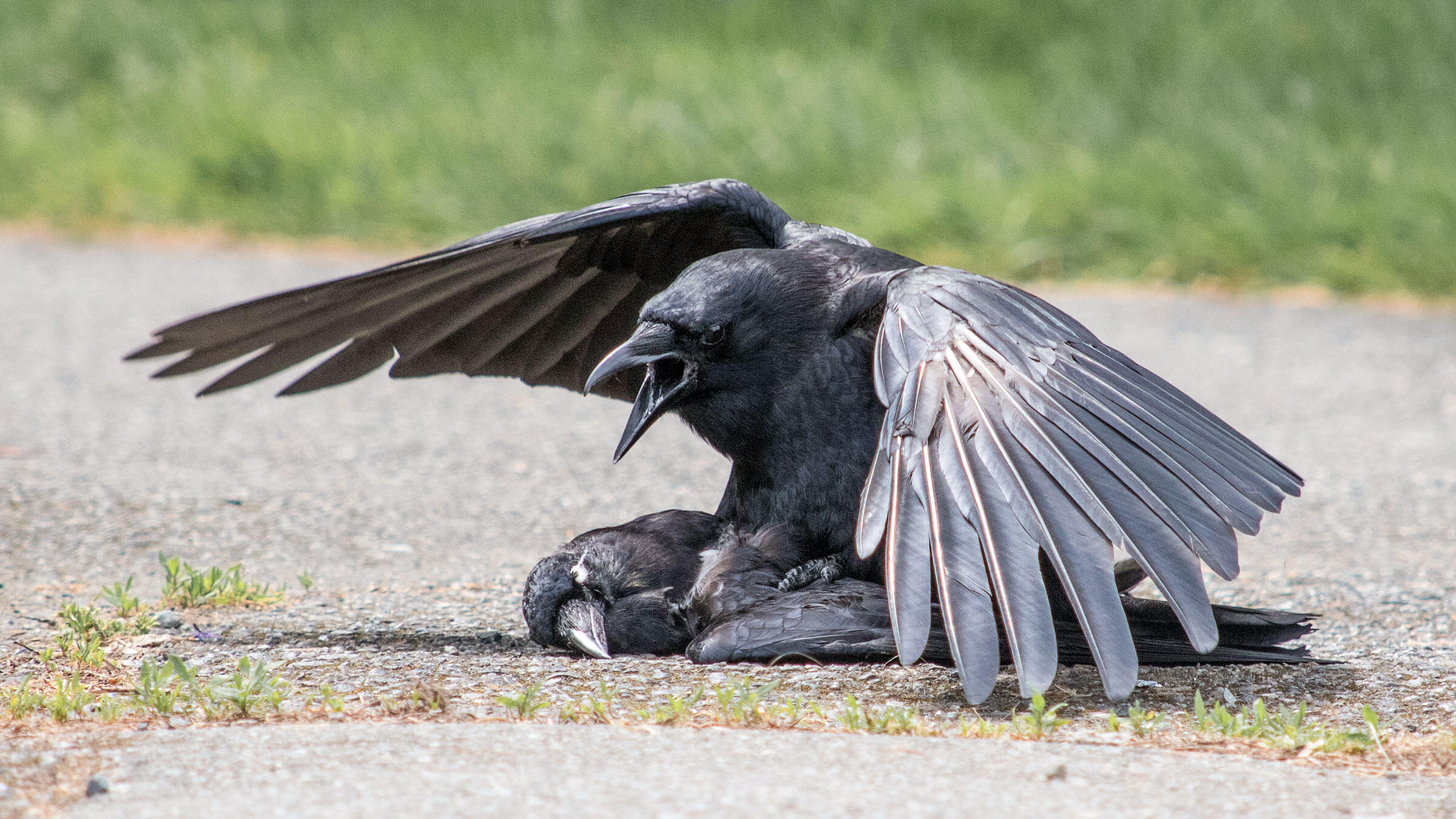 Think Crow Funerals Are Strange? Wait Until You See the Wake

New research shows that American Crows will occasionally interact with the dead—including engaging in necrophilia.

Crows are clever, thoughtful birds that have shown themselves capable of solving complex problems, remembering human faces, and even holding a grudge. They also flock to members of their own species after death in a behavior that looks like mourning, but which scientists suspect is closer to reconnaissance.

“What killed this bird?” they seem to be thinking. “And how do I avoid the same fate?”

But there’s this other thing some crows do when they encounter a fallen comrade, according to a new study published in the Royal Society Publishing journal Philosophical Transactions B. And it’s a little off-putting.

Sometimes crows try to get it on with the dead.

Now, a little necrophilia here and there isn’t unheard of in the animal kingdom. Scientists have documented occurrences in ground squirrels, tegus, Mallards, sea lions, and otters, just to name a few species who apparently dabble in the dark arts. Unfortunately, these are almost always opportunistic, one-off observations that don’t offer much insight into the animal mind. But Kaeli Swift, an animal behaviorist at the School of Environmental and Forest Sciences at the University of Washington, has changed all of that.

Over the course of two years, Swift tracked down pairs of crows across the Seattle area and submitted them to one of two controlled experiments. In the first trial, she presented each pair with one of several taxidermied corpses she kept in her backpack—either an adult crow, a juvenile crow, a pigeon, or a squirrel. In this study, she found that the majority of crows (70 percent) refused to interact with the dead animal—which makes sense.

There’s a risk associated with approaching a corpse, says Swift. You can contract a deadly disease, get mobbed by stinging insects, or perhaps get offed by whatever killed the other animal. This is why she and her coauthor John Marzluff, also of the University of Washington, believe crows perform these so-called funeral rituals—the animals are trying to learn about threats in the area.

However, in 10 of the 153 trials, Swift and Marzluff found that the birds threw caution to the wind not just to peck at the crow corpses or try to feed from them, but to engage in sexual behaviors. These include either mounting the carcass, engaging in sex with their mates near the carcass, or presenting themselves to the carcass (drooping wings, uptucked tail, vibrations, etc.) as though they were a potential mate.

This was odd, to be sure, but perhaps these behaviors could be explained by sheer confusion. Was it possible the crows didn’t know the dummies were already dead?

To find out, Swift scared up an entirely new roster of paired crows—she didn’t want to use the same ones in case the birds remembered her or the previous experiment and that skewed the responses. In the second trial, she presented the living crows with either a taxidermied crow that was laying on its side, as if road-killed, or a taxidermied crow that was propped up to appear as though it was still alive. Interestingly, the living birds seemed to be able to tell the difference, choosing to scold (or caw at) the dead-looking corpse more often and dive-bomb or mob the live-looking corpse more often.

But here, too, the crows came on to the corpses. Sexual events occurred four times with the life-like crows and eight times with the roadkilled ones. What the actual heck?

But here, too, the crows came on to the corpses.

According to Swift, the key to understanding this morbid behavior may be timing. Every single one of the interactions occurred during the birds’ breeding season. (Though the birds interacted with the roadkilled birds twice as often, Swift says the upright test wasn't performed as many times during this "sexy window.")

“They’re going through such intense hormonal changes as part of that breeding season, and they’re so excitable,” says Swift. “I think that their forebrain recognizes that this individual is not a threat, that it’s not alive, but they’re so charged up that they get overcome in responding to that stimulus in a way that they would if it was alive.”

This makes sense to Kevin McGowan, who has been studying the crows of central New York for 30 years with the Cornell Laboratory of Ornithology.

“What we see with a lot of birds and a lot of other animals out there is they’re working their way through their lives pretty gracefully, encountering predators and yelling at them and encountering potential mates and courting them and doing what looks like normal life,” says McGowan, who was not part of the new study. “But every individual is just as stupid as we are, and they’re stumbling through their lives in a lot of ways.”

In other words, sometimes birds make mistakes—even intelligent birds, like crows. And while necrophilia is certainly shocking to our human sensibilities, McGowan says it’s also squarely within the realm of possibility.

“I would have been totally surprised the first time I saw something like that,” he says. “But it’s not like they’re swimming underwater.”