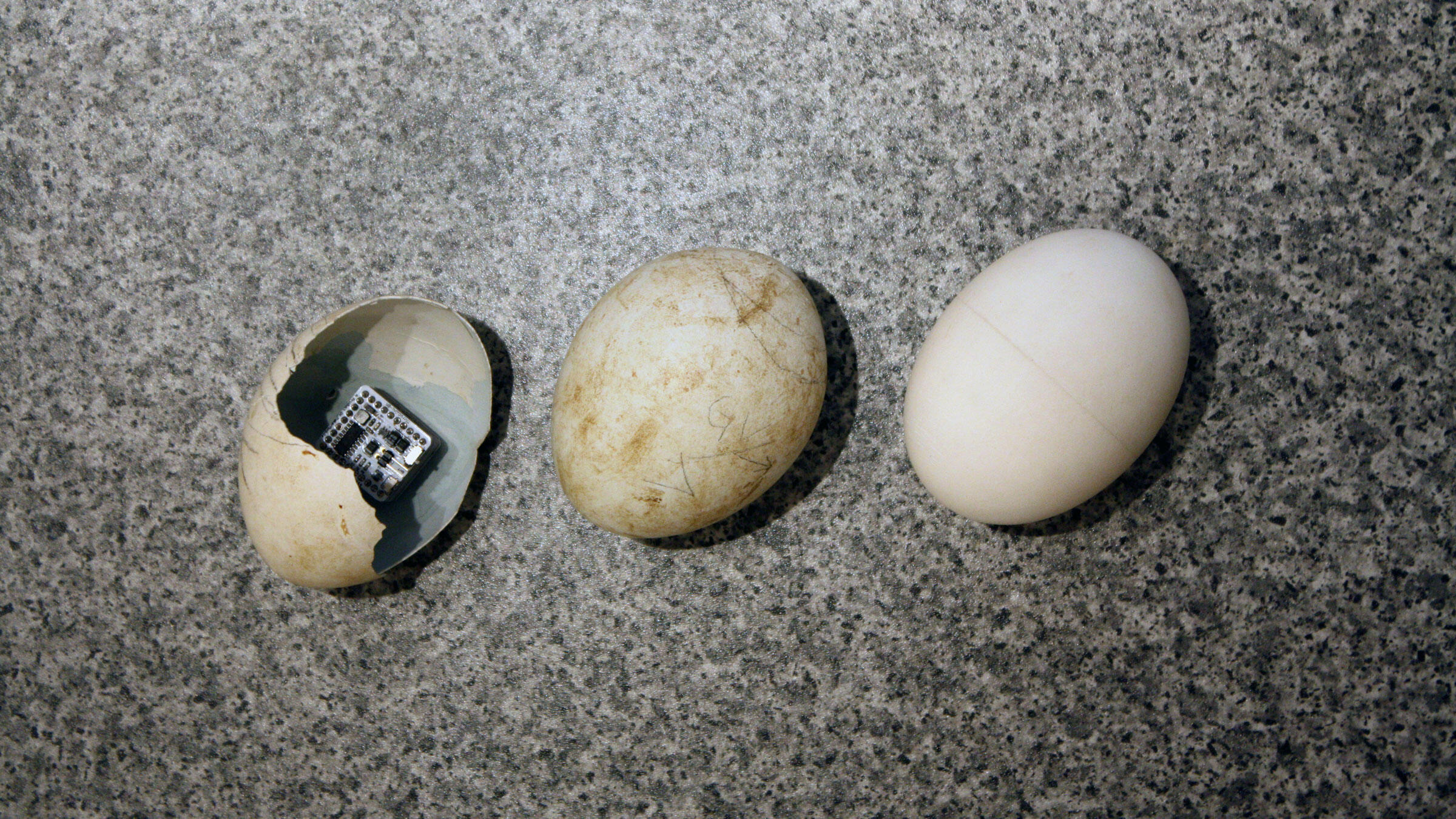 From left to right: A Griffon Vulture egg with an Arduino chip; a failed egg; an EggDuino prototype. Photo: Adam Bloch

A new "smart egg" project is teaching conservationists about the secrets of the nest.

Just because an egg is a dummy doesn’t mean it has to act like one. Last month the International Centre for Birds of Prey (ICBP) in England started planting decoy eggs in the nests of captive-bred vultures to act as oval spies, collecting stats on how vultures incubate their embryos so that conservationists can improve their own hatching techniques. The 3-D-printed gadgets, known as EggDuino, are part of a larger push to keep vultures around the world from becoming obsolete.

Each faux egg costs about $250 to make. (So far, the electronics company that's producing them, MicroDuino, has fronted the cost of everything but the shell.) A seam around the middle unscrews to reveal tiny Arduino sensors—similar to the hardware inside smartphones—that measure nest factors such as temperature, humidity, and barometric pressure. The sensors also track the egg’s movements as the parents turn it (to prevent the developing embryos from sticking). Experts at ICBP plan to use this information to make conditions more natural for incubator-raised eggs, hopefully resulting in more vulture chicks being born in captivity.

Every little chick helps, given that vultures need all the help they can get. “[They’re] one of the most threatened taxonomic groups that we know about,” says Todd Katzner, a wildlife biologist with the United States Geological Survey, whose research focuses on birds of prey. Other than Black Vultures and Turkey Vultures in the Americas, nearly all of the world’s vulture species are in decline, Katzner says. In particular, populations of three species of South Asian vultures have plummeted by 99 percent in the past two decades, largely because of the veterinary drug diclofenac, which poisons the birds when they scavenge on the carcasses of treated cattle. Diclofenac is now banned in India—but vultures are still battling problems right and left. Their absence from the ecosystem endangers other organisms, too, by creating a literal mess: Without vultures, carcasses are left to rot and spread disease, such as botulism and anthrax.

Currently, ICBP is raising about 20 vultures in captivity (part of a program of about 300 birds of prey overall), says Adam Bloch, a trustee of the ICBP and leader of the EggDuino project. The goal of the captive-breeding endeavor is not to release the birds into the wild, but to improve methods for rearing baby vultures and then share that knowledge with larger centers that are raising the birds for reintroduction. Another aim is to educate the public about birds of prey through tours and flying displays. “I spend a lot of time trying to convert people from loving owls to loving vultures,” Bloch says.

But the trickiest, more delicate part of the program is artificially incubating the eggs. Typically, a vulture lays an egg every two years or so, Bloch says; yet when a freshly laid egg is removed (either naturally or by a human), the mother will lay another in its place. Conservationists use this technique of “double-clutching”—hatching one egg in the incubator and another one under the bird—to increase the rate at which the population can increase, Bloch explains.

The incubation system, however, is far from perfect, and conservationists hope that EggDuino will help them improve it. Under the current conditions, ICBP researchers need to leave every egg with the parents for the first 20 days of the 60-day incubation cycle, Bloch says. Eggs that spend their first three weeks in the nest do much better than those raised in the incubator from the very beginning. Researchers don’t know why this is, and they hope that EggDuino will help them figure it out.

A Griffon Vulture egg in the early hatching stage. It will be about another 10 days before the chick emerges. Video: Adam Bloch

As we’re chatting over Skype, Bloch points out an EggDuino sitting under a Griffon Vulture just a few feet away from him at ICBP’s headquarters in Newent, England. (He later gives me a virtual tour of the center’s vulture barns.) “EggDuino’s never going to finish being developed,” he says—the team will constantly be refining it. And the system is entirely open source, so others may be able to build on the gadget as well, he adds.

Katzner, who isn’t involved with the effort, calls EggDuino “a pretty neat project.” Captive breeders have improved upon their husbandry systems largely by trial and error, he says. Developing technology like this “gives you the opportunity to cut through that trial and error and get right to the meat of the issue.”