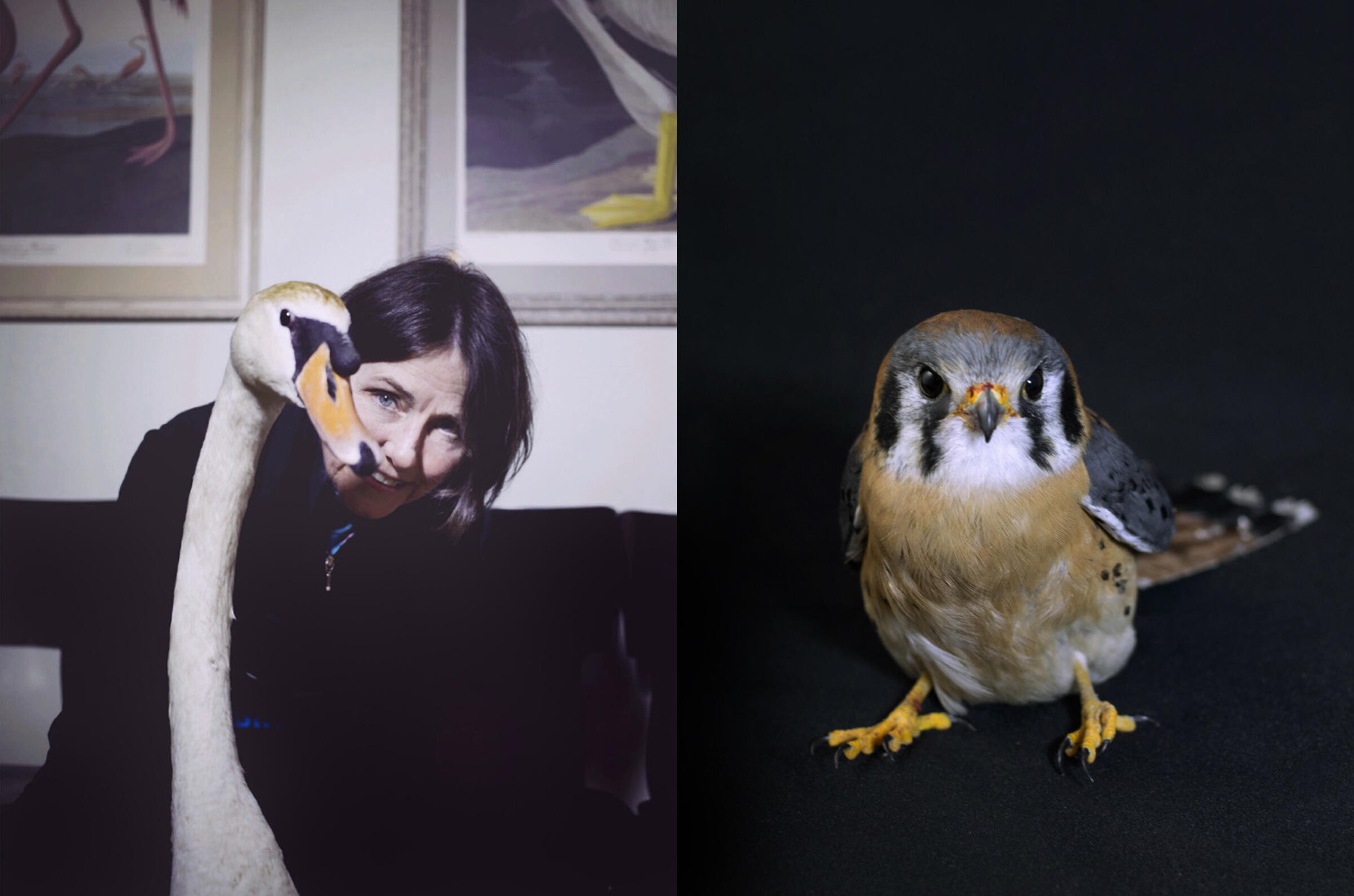 The Wild Bird Fund tends to thousands of birds with help from committed rehabbers and curious rescuers. Meet some of the patients in recovery.

By Purbita Saha and Mike Fernandez

By Purbita Saha and Mike Fernandez

In mid-March, New York City braced for a potentially record-setting blizzard. Instead of the forecasted 20 inches of snow, however, the city tallied just seven, plus a miserable drizzle and a snarl of cancelled subway trains. Humans weren’t the only ones to see their commutes disrupted: The squall stranded dozens of American Woodcock in Central Park as they were en route to their Northeast breeding grounds.

More than an inconvenience, the storm posed a real danger to the woodcocks. Over two days, birders, joggers, and NYC Audubon members scooped up 63 of the sickly birds and transported them to the Wild Bird Fund, the city’s only avian-rehab clinic, located on the east side of the park.

Members of the 18-person staff tended to the birds, while scores of volunteers whipped up batches of high-protein slurry to feed to the ravenous troop of “timberdoodles,” as woodcocks are also known. “The woodcocks were very fussy and didn’t want to be captive,” Rita McMahon, Wild Bird Fund's cofounder and director, says. The large number of “bogsuckers” (another name for the species) strained the compact, 1,500-square-foot facility, which has six small incubator units, a short flight enclosure, and a therapy pool to help patients recover from injury. But it held up to the influx: Once the week was over, all of the birds were in good health and were released on unfrozen grounds out in Long Island. By the end, Wild Bird Fund staff treated more woodcocks in those few days than they did during all of last year.

Typically, the avian-rehab facility's patients are more diverse and come from the city's many prime bird habitats. Central Park hosts nearly 300 species of migrants every spring; Jamaica Bay offers one of the best saltwater habitats on the East Coast; and the Big Apple has the highest concentration of nesting Peregrine Falcons in the world. Concerned citizens have brought in grebes from Brooklyn, vultures from Queens, and owls from Staten Island; injuries range from poisoning to window collisions to pet attacks. Since the nonprofit opened in Manhattan in 2005, the number of birds that come through its door has increased by at least 30 percent each year, McMahon says, with nearly 5,000 birds receiving treatment in 2016.

Despite the increasing patient load, the clinic has never had to turn a bird away, thanks to its dedicated staff and volunteers. Most staff members spend a year or two with Wild Bird Fund before going on to veterinary or graduate school. “I lose almost all my people, and I’m proud of it,” McMahon says.

The clinic goes beyond its role as a repair shop by providing education, too. Its staff lead field trips to introduce children to the birds that live amid the skyscrapers, and rookie rescuers are able to learn about wildlife they may have never noticed before. “What we do for the individual animal means a lot,” McMahon says. “But the real thing is to change people’s attitudes.” For every New Yorker who learned how to identify a woodcock this spring, consider it a mission accomplished.

Scroll through the photos below to meet some of the birds that Wild Bird Fund has cared for.

Rita McMahon began rehabbing pigeons and sparrows out of her apartment 21 years ago. Now she works seven days a week, 5 a.m. to 6:30 p.m., behind the scenes at the Wild Bird Fund, which she helped found. “My last vacation was six years ago,” she says. Here she is with Joe, a young Mute Swan that came to the clinic with lead poisoning, a bacterial infection, and cut-up feet. (The staff give each patient a name.) Despite the team’s efforts, he didn’t survive.

While American Kestrel populations are diminishing in most parts of the country (potentially due to pesticides), they’ve proven resilient in New York City. Lee has cataracts in his left eye stemming from head trauma. He was relocated to the Raptor Trust in New Jersey to be adopted as an education animal. 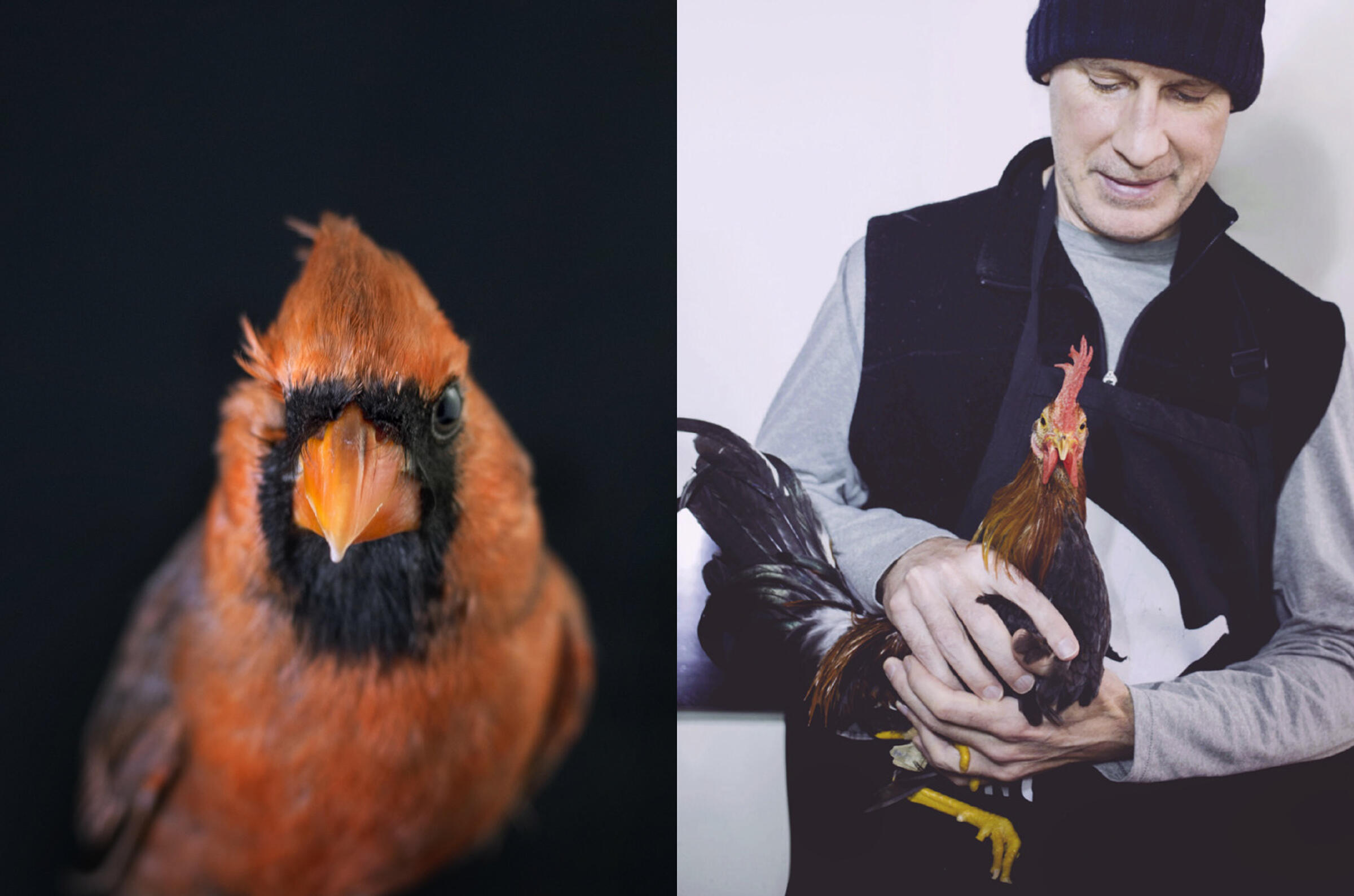 Ben may be the friendliest one-eyed Northern Cardinal you ever meet. Take out your smartphone and he will hop right on, tapping at the home button as if he wants to take a selfie. He’s even rubbed shoulders with Sigourney Weaver at a fundraiser. Because of his partial blindness, it’s nearly impossible for Ben to survive in the wild. The clinic is his home for now.

Volunteer Christopher Ross holds Fernando, a cock confiscated by the New York Police Department after its officers busted a fighting ring in Brooklyn. Following a 10-week recovery period, he was transferred to the Vine Sanctuary in Vermont to undergo behavior-modification training (read: anger management) so that he could eventually be adopted by a farm. 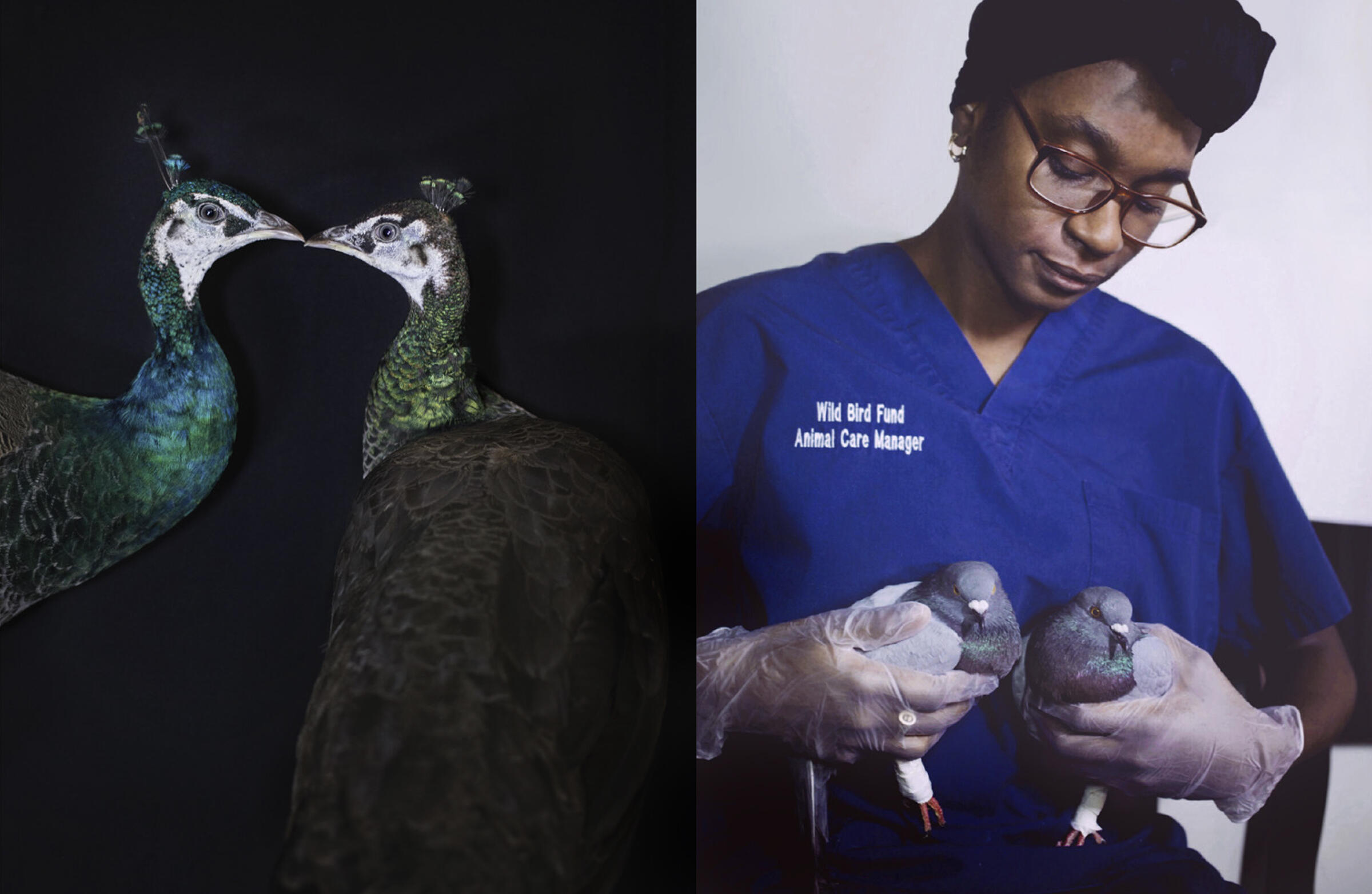 Anise and Cardamon, a young peafowl pair, were found wandering the streets of Queens. After a few weeks of sunning in front of the clinic’s turtle tanks, they were sent to a permanent sanctuary.

Staffer Shannon Brathwaite holds another inseparable duo: two blue-bar Rock Doves (better known as feral pigeons) that arrived at Wild Bird Fund with broken legs. Outfitted with matching splints, Francis and Mayra healed quickly, and were released within weeks of their arrival at the clinic. 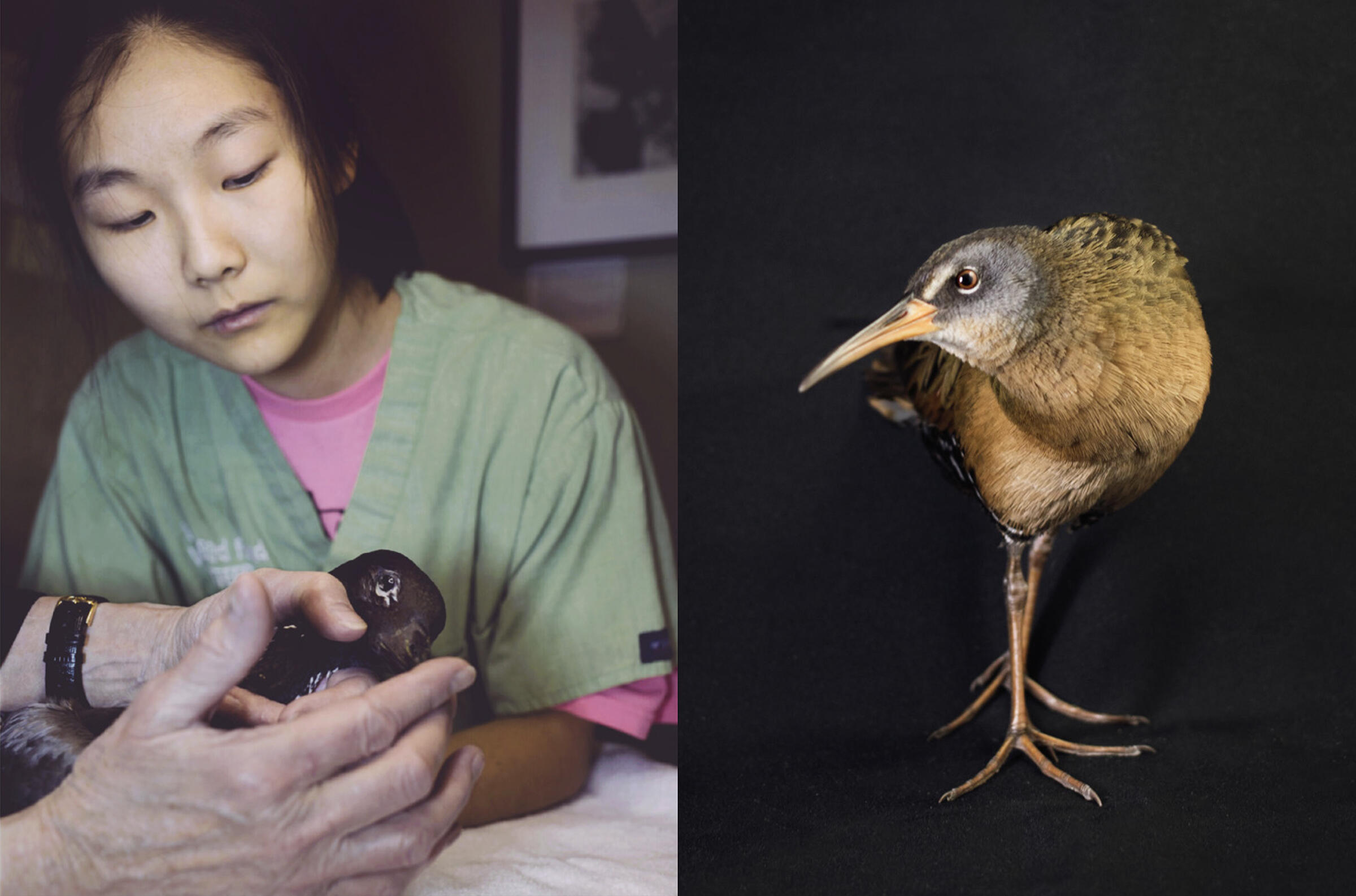 Haine Cho, 18, is used to gritty tasks during her shifts at Wild Bird Fund: fecal floats, gram stains, and of course, mucking cages. Here she comforts Cecilia, a female Wood Duck, as the bird’s detached retina is inspected. Though her eye never completely healed, Cecilia could forage and fly, so the clinic crew freed her in Central Park—the site of most of their rehab releases.

It’s estimated that up to one billion birds are harmed or killed by glass collisions each year; NYC Audubon runs a crowd-sourced database in Manhattan called d-bird to track such fatalities. Mulberry the Virginia Rail was one of the lucky ones. She was taken to the clinic after crashing into a window during migration, and was later released at the Great Swamp National Wildlife Refuge in New Jersey. 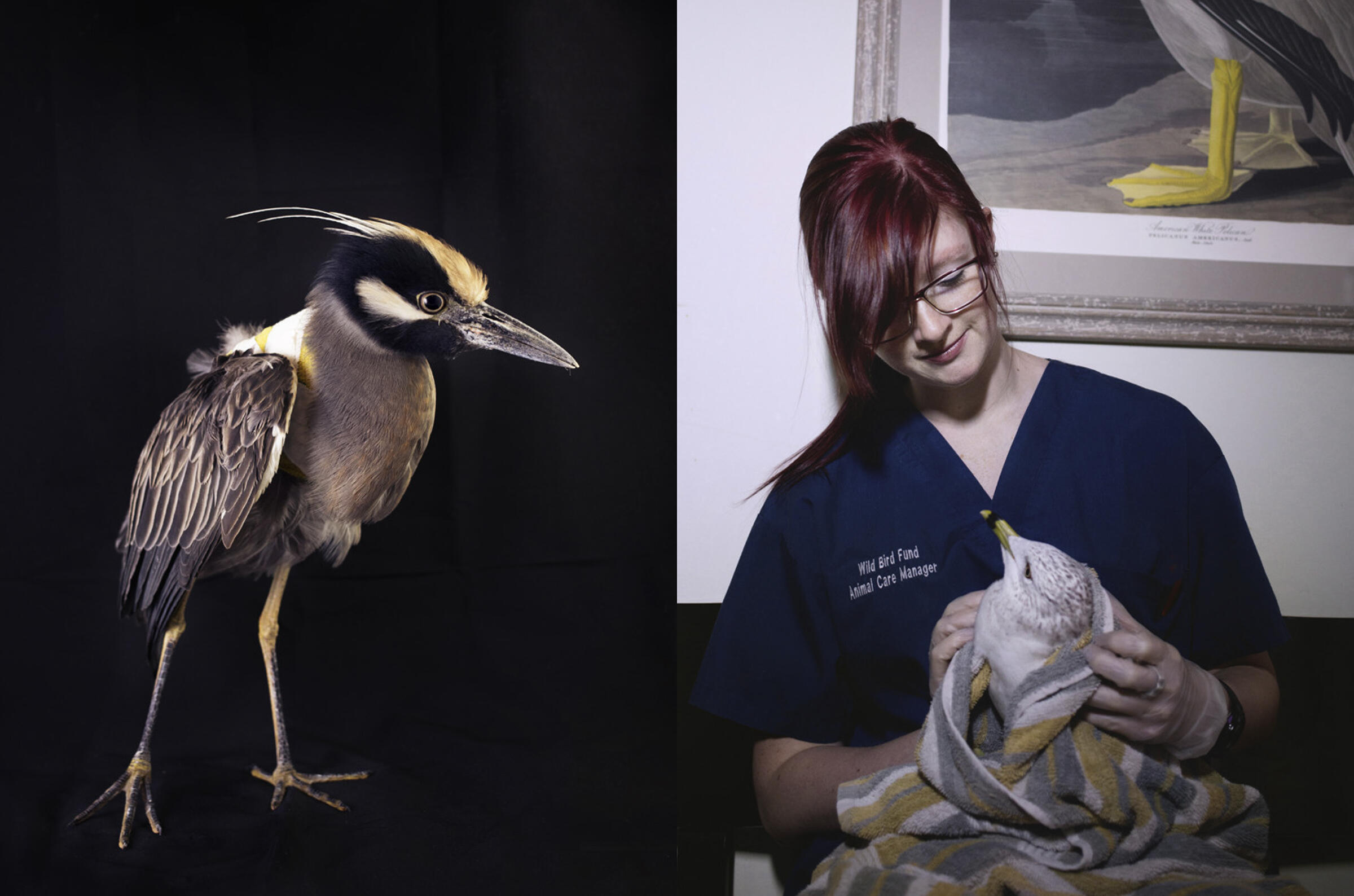 Yellow-crowned Night-herons roost on little islands in the city harbor, along with Double-crested Cormorants and Common Terns. Mika the night-heron arrived at the clinic in bad shape. His wing was fractured in two places and had to be surgically pinned. Ultimately, he died from a parasite overload.

Kate Faehling, the animal-care manager at Wild Bird Fund, checks on Sailor, a Ring-billed Gull. The bird was euthanized after rehabbers discovered that it had permanent brain damage from eating rock salt. “It’s a hard job, but it’s rewarding,” Faehling says. In her downtime, she looks for warblers and other songbirds in Central Park. 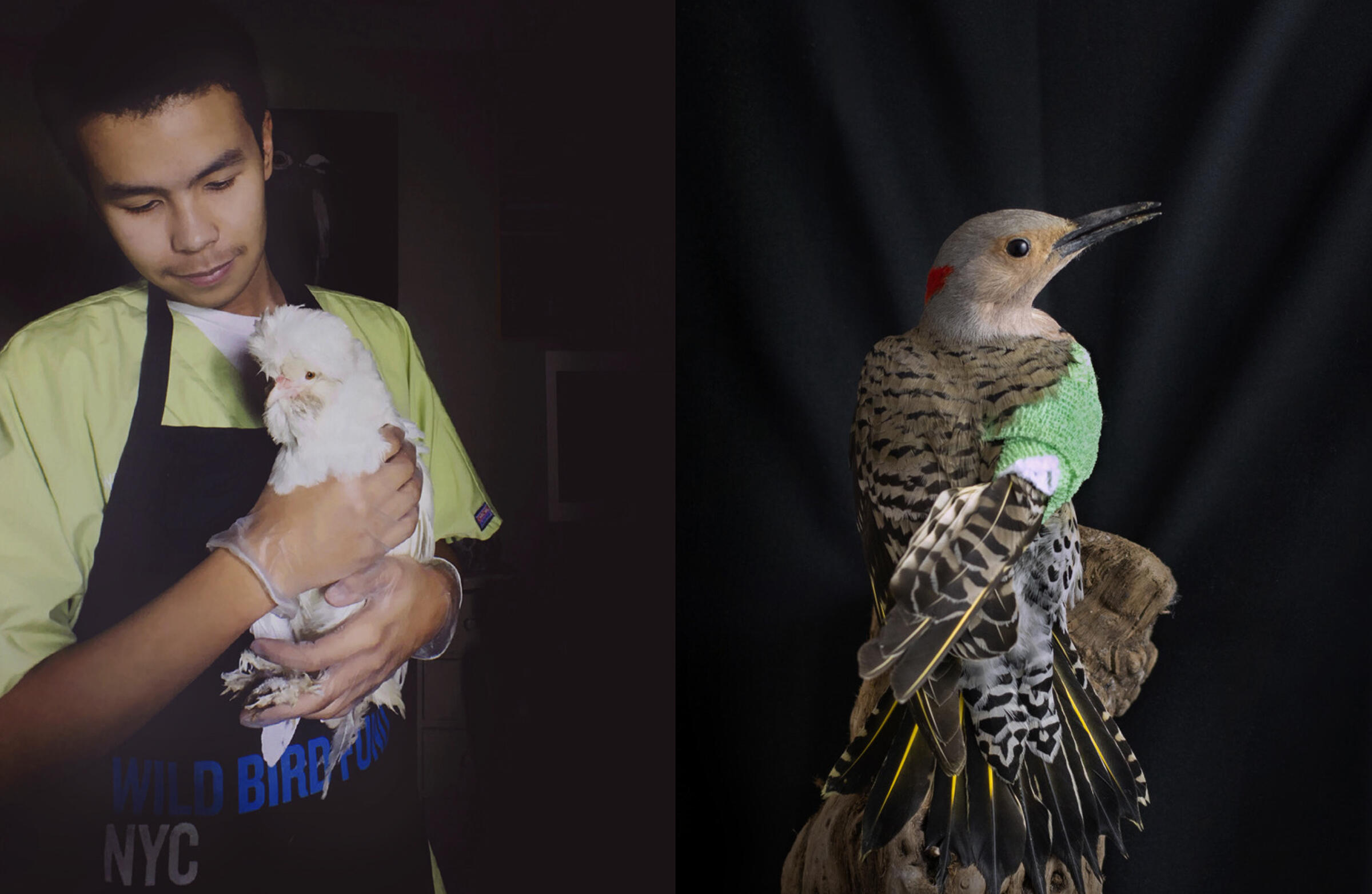 Sultan chickens are a comical, regal breed that originated in Turkey. Zeus was rescued from a home in Queens, where he was abused and underfed. Now back to full strength, he’s flourishing on a vegan farm in Vermont.

Super, a yellow-shafted Northern Flicker, suffered a fractured shoulder after colliding with an apartment building. The superintendent brought the bird in; it was transferred to the Raptor Trust to test out its wings in an outdoor flight cage before eventually being released.