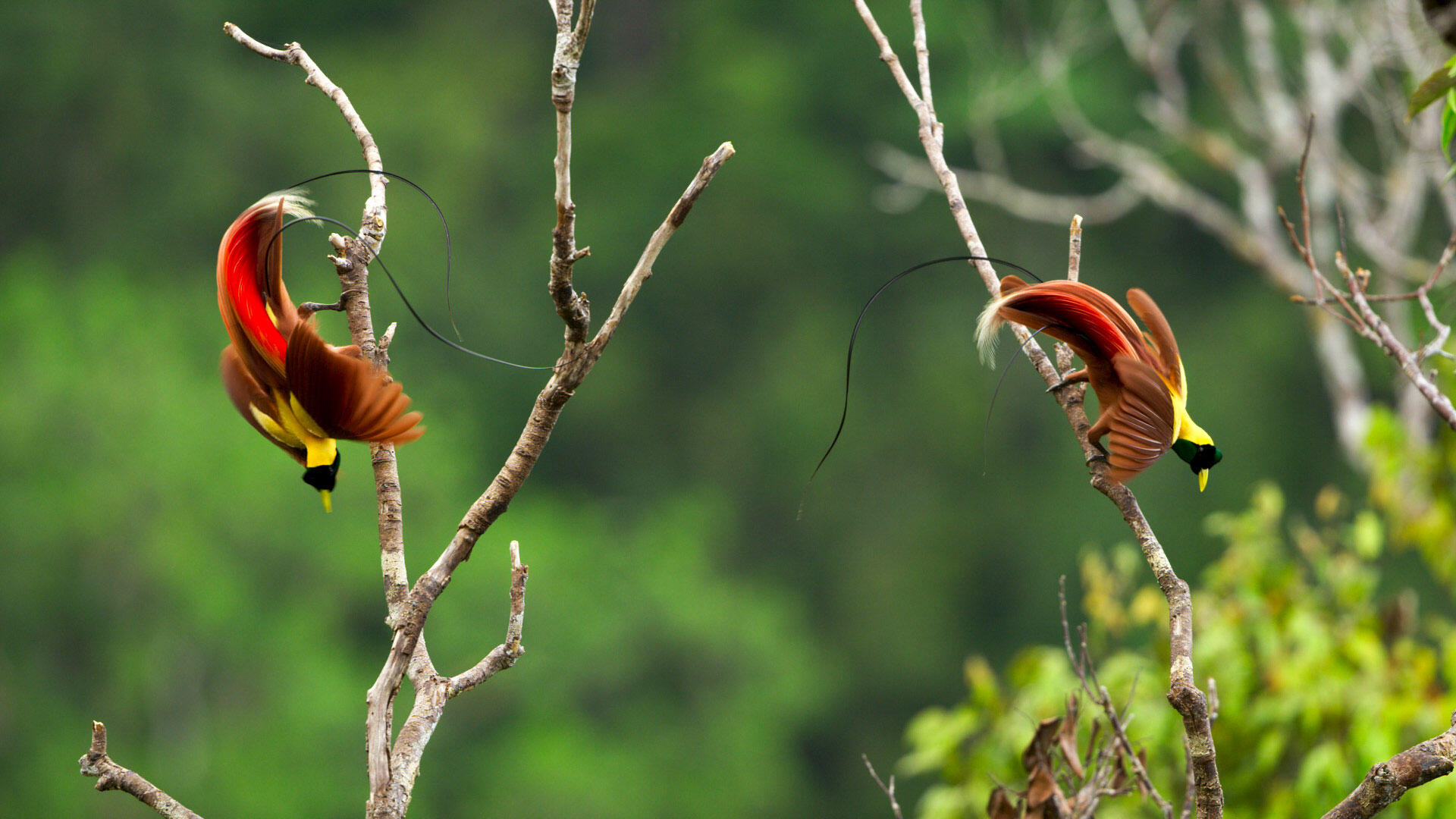 Red Birds-of-Paradise displaying in the trees of West Papua in New Guinea. They share their tropical forests with the vibrantly colored Wilson's Bird-of-Paradise. Photo: BBC AMERICA

Behind the Scenes of BBC America's Planet Earth II

With more feathers than before, the show brings peregrines, birds-of-paradise, and plenty of other amazing avians to your screen. Here's how they got those incredible shots.

Two summers ago John Aitchison was crouched down on a jungle floor in western New Guinea, camouflaged by a sweaty brown tarpaulin. The British cinematographer was there on a three-week assignment for Planet Earth II (which premieres on BBC America on February 18 at 9 p.m. EST). His mission was straightforward: Meet a Wilson’s Bird-of-Paradise, and catch it romancing a lady.

But like most Planet Earth II footage, there was nothing simple about getting the shot. Not only did Aitchison and his two team members have to film a rare bird exhibiting a rare behavior, they also had to shoot it from the perfect angle. So far, the bird’s mating dance had only been filmed from the side, and ornithologists were keen to check out the entire display. So, Aitchison and his colleagues rigged a remote camera to a tree overlooking the male’s small territory. As the bird shimmied up the trunk, they’d be able to see it from the female’s perspective.

What they witnessed was astonishing. “When it’s at exactly the right spot, [the male bird] produces this iridescent bib around his throat—an amazing mirror, really—of vivid metallic green,” Aitchison says. The flashing emerald feathers reflect rays of light that filter through to the forest ground, transfixing the female and coaxing her into mating (hopefully).

These are the kinds of scenes viewers are rewarded with when filmmakers get into the minds of the birds and other creatures. “It’s about thinking from the animal’s point of view,” Aitchison explains, describing the overarching philosophy of Planet Earth II. “What are the challenges they’re facing? And how can we reveal that and make the audience care?”

A decade after the original Planet Earth, this new six-part series—filmed with ultra high-definition cameras, voiced by David Attenborough, and scored by Oscar-nominated composer Hans Zimmer—invites viewers to not just observe wildlife, but also experience the stunning landscapes through their eyes. Broken up by habitat, the show takes us swimming with a sloth in “Islands,” building exquisite nests with bowerbirds in “Cities,” and swinging through the trees with Madagascar’s Indri lemurs in “Jungles”—a scene that saw filmmaker Mark MacEwan vaulting alongside the animals while toting a seven-kilogram camera. What resulted was “an awkward, sweaty ballet,” he says.

MacEwen says the advent of new technologies—like drones, quality camera traps, and 4K cameras—allowed the show’s crew to capture scenes in more intense detail, producing Hollywood-worthy action shots. “You can really see the colors in the jungle: the detail on the skin of a monkey’s face," he says. "We never had that clarity and definition before. It allows us to be less observational through long lenses, and take viewers on a journey with the animals instead.”

To plan out the show’s most intricate shots, cinematographers had to work hand in hand with biologists. “Before I even get [to a shoot], there’s already been months of work to give me the very best chance of getting a certain type of behavior,” MacEwen says. This intense preparation paid off with footage of undiscovered interactions between wildlife, like the Wilson’s Bird-of-Paradise dance from “Jungles,” or one thrilling “Islands” clip of a baby iguana escaping a minefield of racer snakes.

Aitchison, who filmed several of the avian segments, notes that birds get more limelight in Planet Earth II than the previous series. The new episodes feature species such as Sword-billed Hummingbirds, Buller’s Albatrosses, sandgrouse, and Golden Eagles. “Birds offer some of the best stories,” Aitchison says. “If you tell people a really compelling, engaging story about what they do, I don’t think you can fail to fascinate.”

The episode “Grasslands,” for instance, delves into the intricate courtship of the Jackson’s Widowbird in Kenya. The swashbuckling males leap for the females’ attention, black plumes rippling in the breeze. In Botswana, viewers follow bee-eaters riding on the backs of ostriches, inventively catching the insects the big birds stir up in their wake. And in “Islands,” cinematographers braved the fearsome surf and sulphur of volcanic Zavodovski Island to observe how a colony of 1.5 million Chinstrap Penguins survives the intense conditions. This risky assignment took years to research and plan—which is business as usual for Planet Earth.

Aitchison has loftier tales to share. While working on “Cities,” he captured ground-breaking footage of Peregrine Falcons soaring through Manhattan at speeds of nearly 200 miles an hour. New York City contains the densest population of peregrines in the world, with an estimated 17 nesting pairs. Over the last few decades, the birds have turned skyscrapers into urban stand-ins for the cliffs they typically inhabit.

It took Aitchison nine months to secure permission to film from skyscrapers, so he could gain a vantage point on the birds as they dove off the Chrysler Building and other landmarks. While Aitchison got the head-on shots, members of his team captured the peregrines’ flight from helicopters. What resulted is the first-ever aerial footage of the birds hunting Blue Jays and pigeons through a canyon of glass-fronted buildings and over the Hudson River.

“Cities” is unique in that it’s a departure from the show’s typical environments. It’s an ode to a changing world, and how nature is adapting to it, Aitchison says. But more than that, it speaks to the growing rift between people and wildlife. “That ability to empathise [with other beings] is innate in all humans," he says. "But we don’t often do it with animals anymore, because we don’t spend long enough watching them.” Now we have six riveting hours of television to do just that.