In the arid heart of South Africa, a human-made urban wetland serves as an unlikely home for tens of thousands of Lesser Flamingos. From October to April, up to 100,000 of these crook-beaked birds descend on the Kamfers Dam in Kimberley to mate, nest, and rear their chicks. It’s one of only four breeding sites in the world for the vulnerable species. So when more than 7,000 flamingo eggs were laid there earlier this year, locals saw it as a cause for celebration.

But the good news was quickly undercut by catastrophe. Widespread drought has gripped South Africa in recent months, wreaking havoc on the country’s dams, including the 1,200-acre one in Kimberley. When the water levels at Kamfers’ western end hit a low point back in January, a large chunk of the flamingo colony decamped, leaving nearly 2,000 hatched and unhatched babies behind. While the behavior isn’t unusual for water birds at disturbed nest sites, the scale of the upheaval is unprecedented, conservationists say.

When the last adult fled from the dried-up portion of the dam, locals sprang to action. In just a week and a half, volunteers and staff from several parks, zoos, and wildlife groups inspected thousands of nests, scooping up close to 2,000 eggs and starved, dehydrated chicks. The birds were then airlifted and trucked out to rescue centers across South Africa to be raised and nursed back to health. “This is the first time anybody has ever done anything like this with flamingos,” says Teri Grendzinski, supervisor of animal relations at the National Aviary in Pennsylvania, which sent over experts and supplies to assist in the massive undertaking.

Dealing with this influx of chicks has proved trying, even for battle-worn teams like the South African Foundation for the Conservation of Coastal Birds (SANCCOB), one of the seven groups that rushed to the chicks' aid. But the organization’s long history of oil-spill work gives it some experience in the department. “Our role is to respond to disasters,” says Katta Ludynia, SANCCOB’s research manager. Despite their most careful efforts, however, nearly 85 percent of the roughly 500 flamingoes they brought in succumbed to disease and other factors.

Today, inside SANCCOB’s sprawling facility in Cape Town, 80 downy Lesser Flamingos caper about in makeshift ponds, learning how to stand on one leg. Behind the scenes, volunteers blend a pungent mixture of baby formula—sardines, shrimp, egg yolks, and vitamins—to feed the voracious birds. “The response was amazing; we were overrun by volunteers,” Ludynia says. To back up local efforts, zoos from across the United States and United Kingdom flew in troops and medical tools and pitched in on fundraising. “It’s amazing how the world has rallied behind the wellbeing of these chicks,” says Mark Anderson, CEO of BirdLife South Africa.

The primary aim is to increase the birds’ weight by roughly 10 percent daily to get them prepped for the wild. “The timing is so important,” says Pilar Fish, director of veterinary medicine at the National Aviary. “It really shows you just how fragile these flamingo chicks are. Every component of their care has to be carefully matched [with natural conditions].”

That means rehabbers have to coach the chicks to be instinctual by having them socialize in “creches”—precursors to the massive flocks they form as adults. Accidental imprinting also has to be avoided. “We wore pink t-shirts, pink sleeves, and black rubber gloves when we fed the birds to simulate the color of the adults,” Grendzinski, who went to South Africa to work with SANCCOB in February, says. The chicks will need constant care for another two months before they can be released to a site that’s yet to be determined. “If the rains do not come, they may have to stay in captivity until next summer—a worst-case scenario,” Anderson says.

As the surviving birds grow under their new keepers, the groups are holding a tight watch over the remaining flamingos at Kamfers. About 5,250 chicks and their parents have held on in wetter portions of the dam, thanks in part to effluent fed in by the municipality over the past few days. BirdLife scientists are taking round-the-clock measurements on water quality, algae levels, and nestling survival to gauge how the rest of the colony is faring. If the situation looks precarious, they’ll be ready to dispatch a second rescue.

With the current crisis almost under control, conservationists would like to see a long-term fix for the dam and its water woes. The dramatic events that kicked off 2019 only underscore the Lesser Flamingos’ dependence on Kamfers, Anderson says. “This is such an important site,” he explains. “It’s the only one in South Africa where they breed.”

Surprisingly, the species’ history with the area is relatively short. Forty years ago Kimberley began piping its sewage and runoff into an empty salt flat, transforming it into a makeshift dam and wetland. The nutrient-rich environment fueled the growth of blue-green algae, which in turn attracted flamingos and more than 60 other types of water birds. Noting the uptick, in 2006 BirdLife South Africa paired up with local mining company to build an S-shaped island for nesting when the dam got too high. They even set up tiny turrets to mimic the mud mounds flamingos typically lay their eggs on. 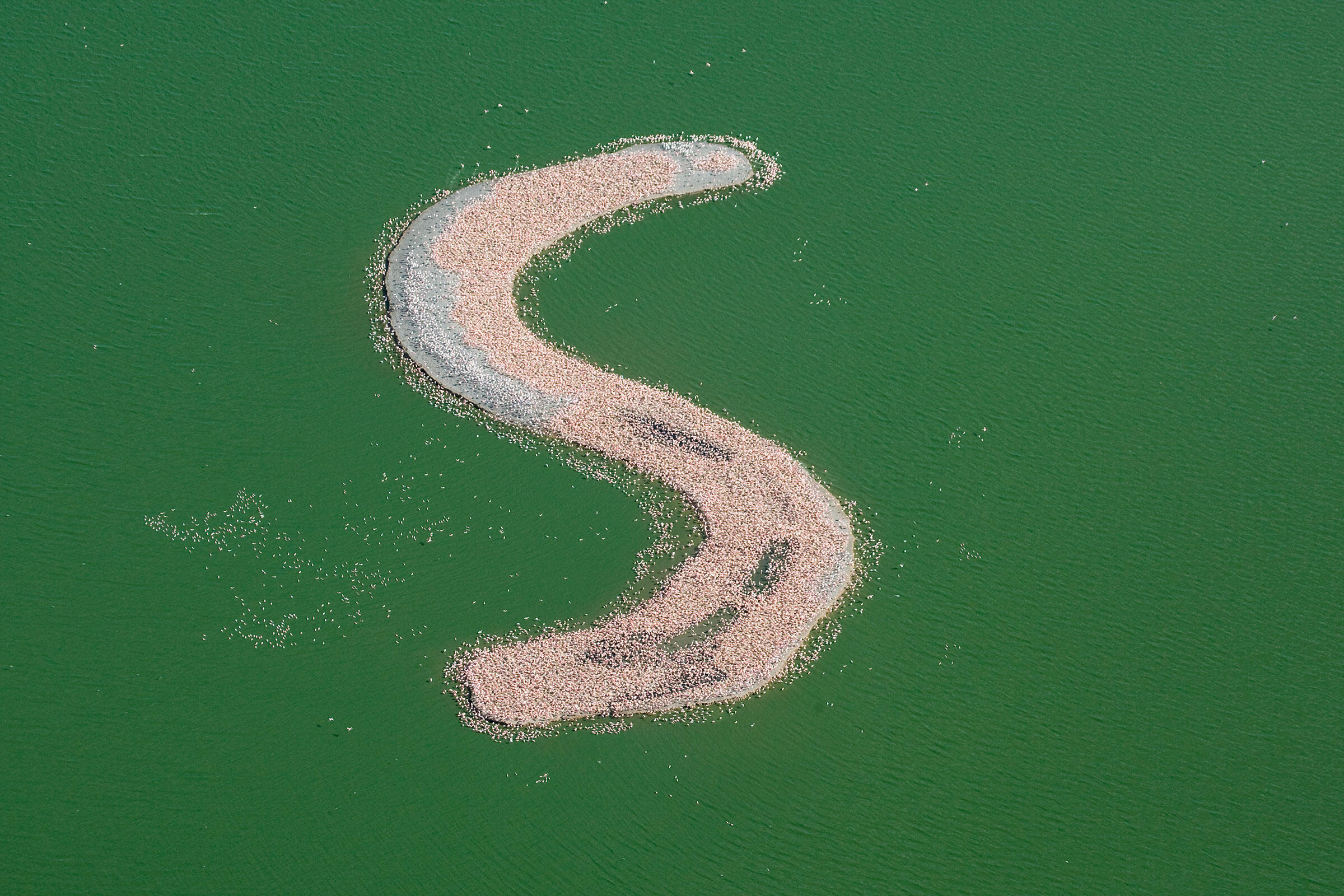 The dam’s draw on the species could be further attributed to climate change across the birds’ range. Unpredictable rainfall in Namibia, Tanzania, and Botswana has made it hard for Lesser Flamingos to breed in their natural habitat; so they flock to the more reliable flows of Kamfers instead. But now Anderson says they’re facing hardships in South Africa as well, due to drought and deteriorating infrastructure.

This is where Anderson sees the greatest benefit to the dramatic January rescue. With all the international attention, he thinks government officials in Kimberley will finally recognize the dam’s global conservation value. He wants to work with them to put in measures that hold water levels steady through breeding season, securing the site as a crucial buffer against climate change and habitat destruction for the next generation of Lesser Flamingoes.

“People have become passionate about the rescue,” Anderson says. “But there are bigger issues at stake. It’s about the population, the species, and its habitat.”

SANCCOB’s Ludynia echoes that view. “Human interventions like our’s should be the last resort,” she says. “Protecting the environment in the long run will take us further.”