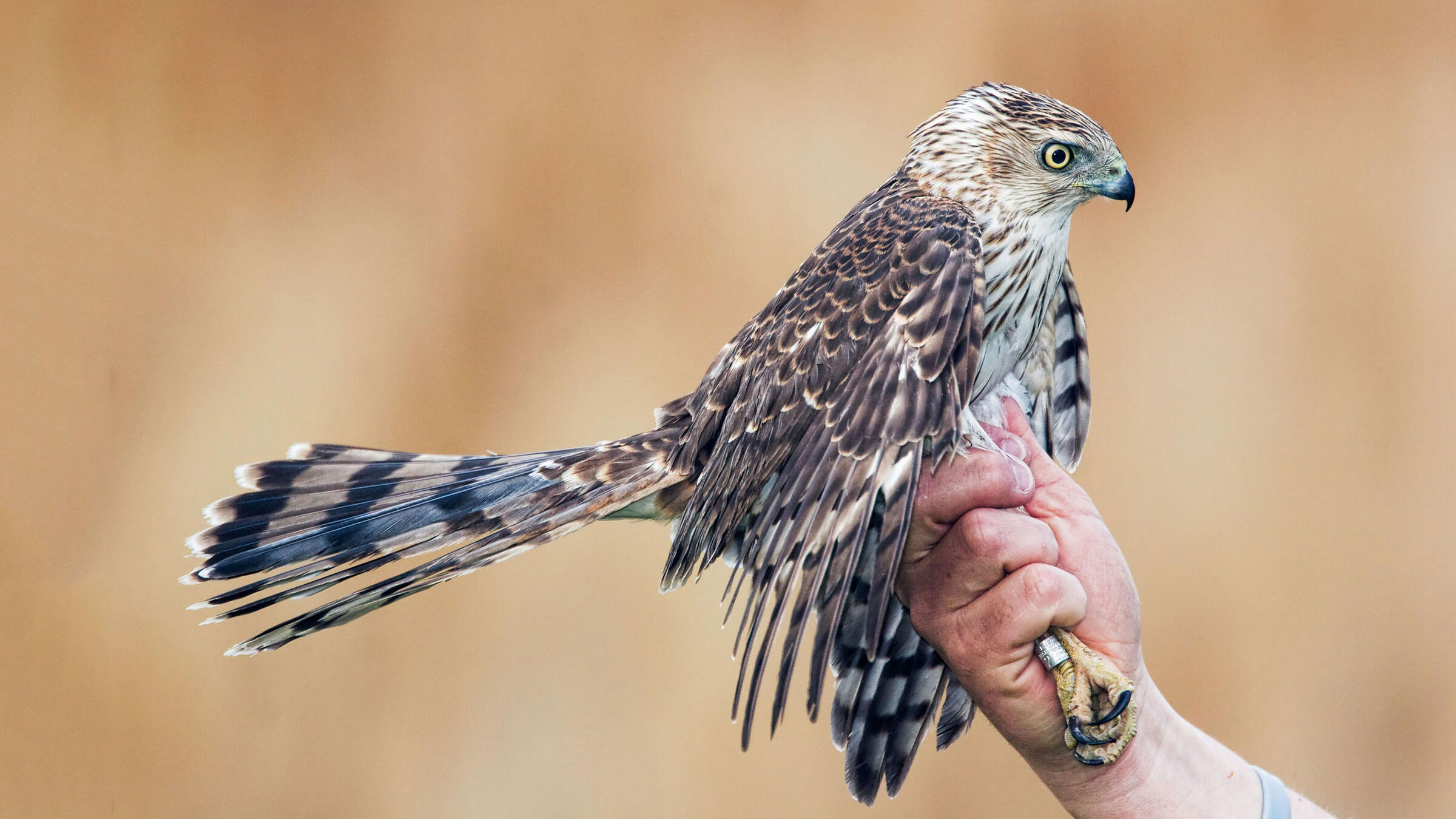 A simple numbered ring, like the one on this Cooper's Hawk, can help scientists track trends in avian populations. But getting a band on a raptor also takes a lot of skill. Photo: Harold Stiver/Alamy

On a windy day in Hilton, New York, four bird banders from Braddock Bay Raptor Research (BBRR) sit in a wooden blind about twice the size of a garden shed, their binoculars poking through slits in the wall. They search the skies for raptors—and though it's not the best weather, they’re in luck. A Sharp-shinned Hawk rides the gale into their sightline.

Now comes the tricky part: getting the bird of prey down to the ground. Unlike with songbird banding, where birds fly straight into nets stationed in the woods, raptors need to be coerced into deviating from their path. There needs to be a diversion—and it needs to be live.

The Migratory Bird Treaty Act doesn't protect Rock Pigeons, European Starlings, and House Sparrows because they’re non-native, invasive species; so, at BBRR, starlings and pigeons become bait. They’re outfitted with tiny leather vests and tethered to a fishing line that trails into the blind. When a raptor is spotted, the bander will pull on the string, lifting the little soldier bird up and down in the air so that it looks injured. Easy prey . . . or so it would seem.

“Here comes the sharpie,” says one of the banders. Another pulls on the tethers like a master puppeteer, causing a starling and pigeon to cartwheel up and down in the open field. Like an arrow, the hawk dives towards the starling.

A spring-loaded net shaped like a taco shell snaps over the hawk. The starling, a little flustered, stands up, ruffles its wings, and sidesteps its captive predator.

Barb French opens the blind door and walks out into the field. She bends down and checks on the starling. (It's fine.) She detangles the lines, then opens the trap, grabbing the sharpie by the feet.

She looks down at her favorite raptor and smiles. For someone who owns a referral business for pedigreed-cat breeders, French admits she's a strange fit for the world of bird banding. After recovering from a broken foot, French’s doctor told her she needed to start exercising again. Not a fan of the gym, she started taking long walks outside—and eventually, began birding. Raptors, especially Sharp-shinned Hawks, mesmerized her.

After taking a few birding classes, French discovered that anyone—not just ornithologists—could train to be a licensed bird bander. She spent three years working toward her license, which allows her to capture certain species and gather the necessary data on them. She now works as a sub-permitee on BBRR's seven-person raptor team, under long-time master bander Dan Niven.

One of the blinds French covers is based on the shores of Lake Ontario, which is a popular flyway during migration season. The more than 7,000 square miles of water act as a wall, pushing birds straight into the station’s path.

BBRR welcomes human visitors as well; it claims to be the only raptor-banding center in North America open to the public without appointment. Today, a clump of people have gathered to watch the sharpie’s capture. It all happens in about five seconds—between the starling leaping, the hawk swooping down, and the bander releasing the trap.

The role of the lure birds doesn’t always sit well with visitors, but French explains that with the protective vests and the banders on the sidelines, they're more or less safe and sound. “We don’t want the hawks to injure or kill [them],” French says. “Many people have tried to come up with some sort of a fake lure—robotic birds, birds that have been made carefully with feathers. Hawks just don’t fall for them.”

As soon as the raptor begins its descent, the bander pulls another tether to release a spring-loaded bow trap. The metal, mesh-covered oval is so powerful and quick, it traps the raptor before it reaches the bait. If the bird isn't directly in the middle of the net, however, it could get injured. It takes years of training to master this maneuver, French says—only the experts are allowed to try it on a real bird.

As French goes out to retrieve the catch, she leaves her gloves behind. “To protect us from, say, a determined Red-tail, the gloves would have to be so thick that we couldn’t move our hands,” French says. “We have to be able to feel what we’re doing, because with some of the really small birds, if you squeezed them too hard, you could easily break their legs.” Bites and scratches are a steady part of the job. As a precaution, French and other banders are recommended to get tetanus shots every five years, rather than 10. 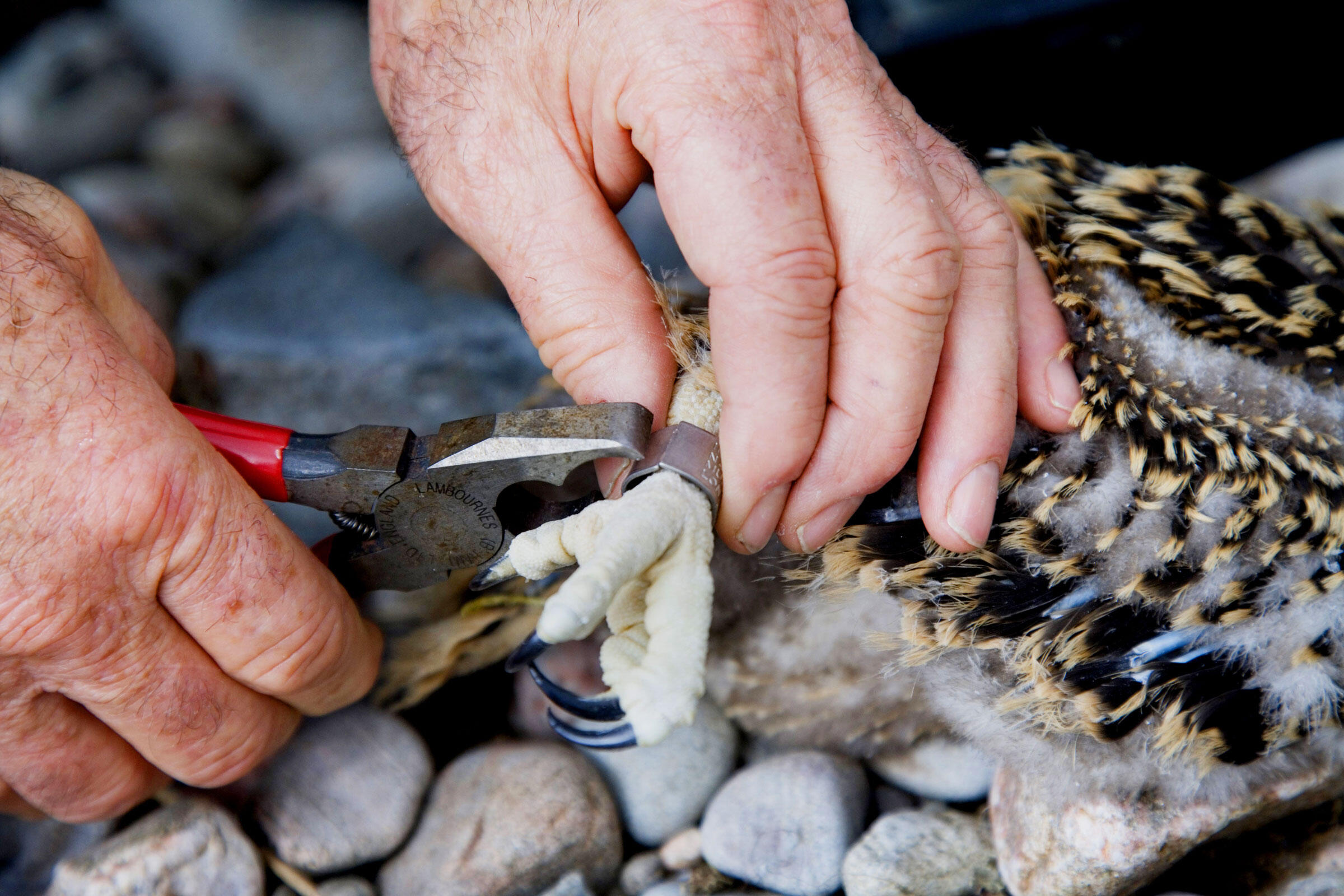 Attaching a band to a nestling Osprey's ankle. The pliers are used to tighten the bracelet so it doesn't slip off, but not so much that it hurts the bird. Photo: Blickwinkel/Alamy

Back inside the blind, there’s a plethora of empty cans. French's sharpie goes head first into a Pringles container. On the floor is a trash can—just in case a Bald Eagle makes an appearance. The team typically gets Sharp-shinned, Red-tailed, and Cooper’s Hawks, with a sprinkling of American Kestrels, Merlins, Rough-legged Hawks, Red-shouldered Hawks, Northern Goshawks, and the occasional Bald Eagle (usually a juvenile).

The darkness inside the can tends to calm the bird down, while providing easy and safe access to its feet. Niven slips on a numbered aluminum band to one of the legs, then weighs its body and measures its wing chord. French writes down the measurements, which get sent to the U.S. Geological Survey’s banding lab in Maryland. Researchers use that data to track migration patterns, species’ population numbers, and other vital trends among raptors.

BBRR typically bands between 200 and 500 birds a season; but over the years, French says it's seen a decline in the number of smaller species, such as kestrels and Merlins, passing through. It’s unclear what’s causing the decline, though some researchers speculate it could be from increased predation by other birds of prey, death by pesticides, or competition with invasive species such as the starlings. The center is keeping track of this potentially worrying pattern.

Finally, after the hawk is measured and braceleted, French will allow visitors to snap a few pictures—if the bird isn’t too stressed. “Then comes the part the raptors like the best,” French says. “We let them go.”

And what becomes of the lure birds? Once migration is over, they're free to fly away. It's likely they'll cross paths with a raptor again—though this time under slightly different circumstances.

Correction: Braddock Bay is the only raptor-banding station open readily to the public; there may be songbird-banding stations that are just as accessible around North America.