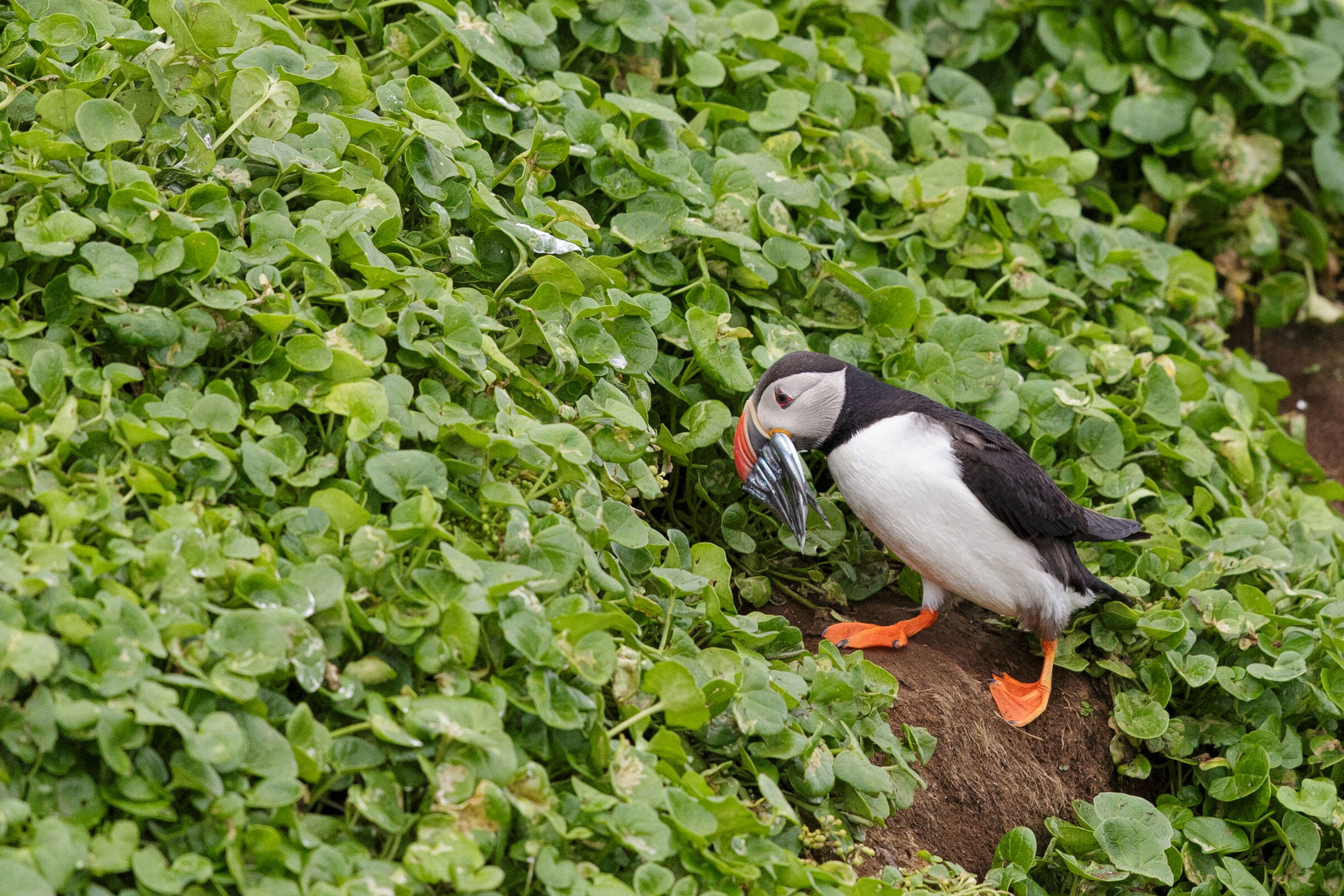 Atlantic Puffins spend most of their lives at sea, coming in only during the spring and summer months to nest on islands and coastal cliffs, where they have easy access to fishing and are better protected from land predators. But unlike some other alcids that lay their eggs in the open on rocky ledges, Atlantic Puffins dig burrows, ranging from three to seven feet, into whatever soil they can find along the cliffs—often close to the cliff edge or sometimes on the grassy slopes leading up to it. When you’re photographing these birds on land, you’ll want to be very careful to avoid disrupting the sensitive nesting season, or even injuring the birds (or yourself).

First, don’t go stomping around looking for a good spot to set up your shot—the last thing you want is to inadvertently step on top of a puffin burrow and see it collapse beneath your feet. Instead of walking up to the edge of a cliff, a safer way to get yourself into position is to use a military crawl, which will both distribute your weight more evenly and may also allow you to get closer to your subjects without disturbing them.

Second, as with all bird photography, you’ll want to make sure your presence doesn’t affect your subjects’ behavior. In places where the burrows have overflowed onto grassy areas, take care to avoid positioning yourself near any burrow entrances, so that you don’t prevent the puffins from returning to their burrows to incubate their eggs or care for their chicks. This requires vigilance, as the burrow entrances are not always that easy to see; you can sometimes walk right past one without noticing it until you look back. An added bonus of steering clear of burrow entrances: You’ll also avoid the ticks that sometimes infest the puffins and are most likely to be found there.

Now, to avoid ticks all together and take your puffin photography to the next level, consider leaving land and heading out on a small boat. Often times, this is the best way to get dynamic shots of these birds and other alcids, including murres, auklets, and razorbills. Not sure where to find these species? Check out our guide to these five popular alcid hotspots. They might take a bit of travel to reach, but the shots you get will be more than worth it.

A Crazy Idea to Bring Back Atlantic Puffins Is a Success

Ornithologist Steve Kress’s once-controversial methods are the gold standard for saving seabirds around the world.

Why Closer Is Not Always Better When Photographing Birds

The impulse to shoot your subject at close range can be powerful, but there are several reasons why that's not best for the animal—or the image.