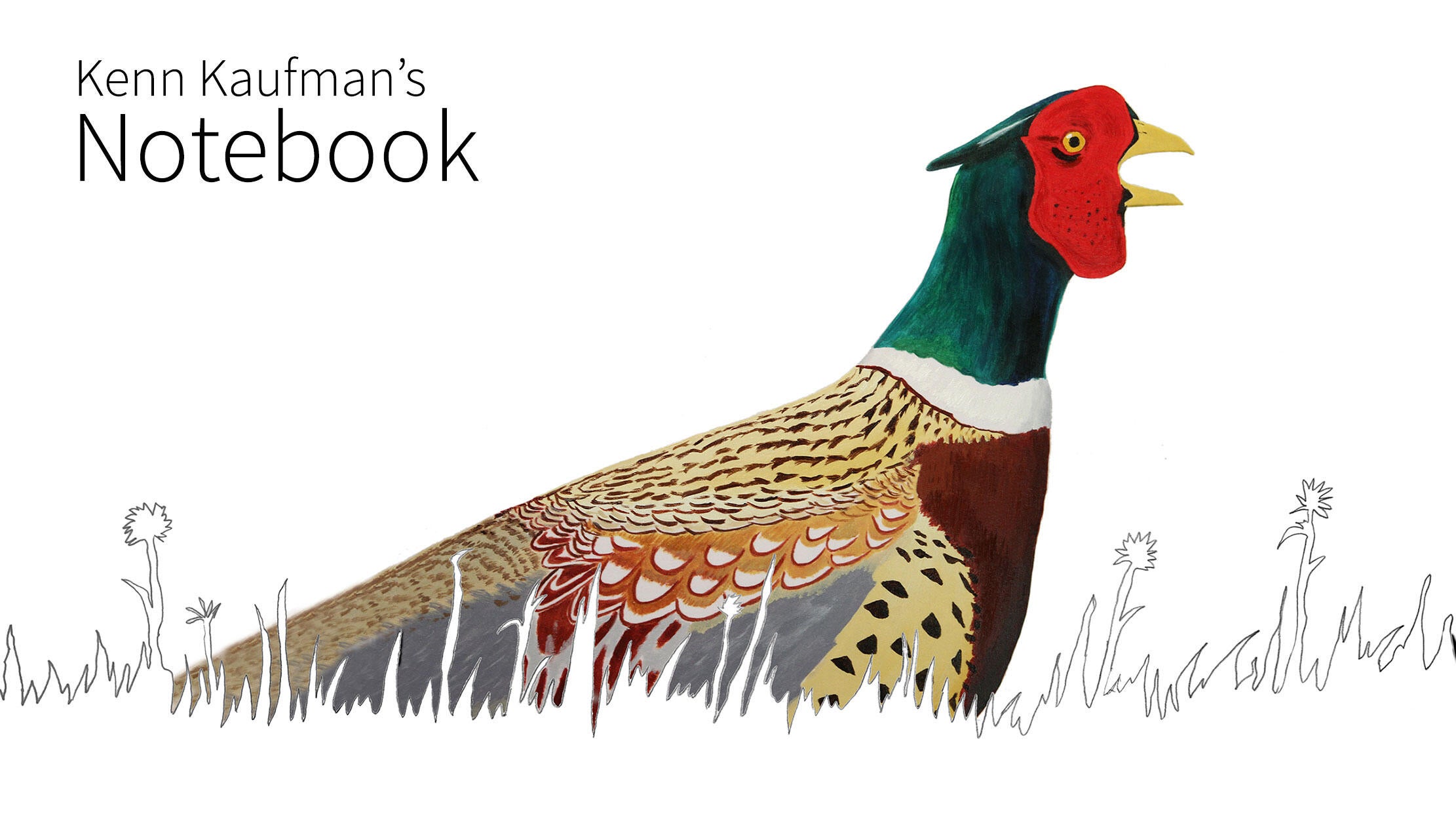 Unwelcome by Some, the Ring-necked Pheasant Is an American Success Story

It might not be native to the U.S., but like so many other immigrants, the bird has thrived here.

It’s a mental image that sticks in my mind. Birding in southern Iowa, my friends and I walked out of some riverside woods to the edge of open farm country. We could see a classic red barn and other farm buildings off in the distance. Close to us, along the near edge of a fresh green cornfield, stood a pair of Ring-necked Pheasants: the proud male pausing in mid-strut, the more demurely colored female a few paces behind. I had the sudden, funny thought that it looked like Grant Wood’s painting American Gothic, with the humans replaced by birds. That impression didn’t last. But for a moment, it seemed a perfectly typical scene to represent the American Midwest.

Was it, though? I wondered about that later. The Ring-necked Pheasant is not native to America at all. Some purists in the birding community are biased against it for that reason—especially those who keep life lists under “NIB” (no introduced birds) standards. But the pheasant certainly is popular with many Americans, especially with hunters who enjoy a tasty and challenging game bird. A national sportsmen’s group, Pheasants Forever, has close to 150,000 members and a stellar reputation for protecting habitat. The Ring-neck is even the official state bird of South Dakota. Regardless of what the birdwatchers say, the pheasant is welcome here.

And it should be. Most of us are descended from immigrants, just as the pheasants are, and the pheasants’ ancestry goes back for many more generations than most of us can claim. The first attempts to introduce Ring-necks into the wild on this continent go back to the 1730s, when a few were released by the governors of New York and New Hampshire. Those early efforts didn’t work out, but their failure didn’t stop others from trying. Even George Washington released pheasants—apparently multiple species of pheasants—at his estate at Mount Vernon. Hey, you can’t get much more American than that.

Most histories say the first successful introduction was in the early 1880s in the Willamette Valley in Oregon. The man behind that effort was Owen Denny, the U.S. consul general in Shanghai at the time, America’s highest-ranking diplomat in Asia. During his service in China, Denny developed a keen interest in Ring-necked Pheasants as wild game birds. Since they thrived in open country near Shanghai, he thought they would do well in the climate of his home state of Oregon, and he arranged to send several shipments home. The birds took hold, establishing themselves in the wild and spreading from there. Other introductions followed within the next couple of decades, in many states from coast to coast. By the 1930s, pheasants were firmly established in most of their current range: abundant on the northern Great Plains, widespread in the interior of the West, and common across the Midwest through much of the Atlantic Coast.

On the other side of the world, the native range of the Ring-necked Pheasant stretches all the way across the temperate regions of Asia, from the Black Sea and Caspian Sea eastward to Korea and the coast of China (with a closely related form, possibly the same species, in Japan). It’s hardly typical for its family: Most pheasants live in dense forests, especially tropical forests. But the Ring-neck does fine in brushy country and fields. It has been studied in the wild more than any other kind of pheasant, but almost none of that study was done on its native range. Instead, most Ring-neck research has been conducted in places where the bird is introduced: all across Europe, all across North America, and even in Australia and New Zealand. So we know a lot about how it lives when you plop it down on a new continent. How it lives in places where it originally belonged . . . well, that is still mostly unknown.

Although the bird is well established around the world, its name is still a bit unsettled. The American Ornithologists’ Union (AOU) has always called it Ring-necked Pheasant. The name seems to fit if we just look at typical males in North America, most of which show a white neck ring. But the bird shows a great amount of regional variation across its Asian range, and many populations show no neck ring at all, prompting the British to call it “Common Pheasant” instead. That may be more appropriate, even though the pheasants without neck rings aren’t necessarily common. The AOU has just changed its own name—to AOS, American Ornithological Society—and eventually it might change the pheasant’s name as well.

Here’s one other paradox about the Ring-necked Pheasant. I mentioned earlier that it had been studied in the wild more than any other pheasant. Does that mean it’s the best-known member of its family, or the one most familiar to humans? Not even close. The pheasant family also happens to include a species named Gallus gallus, or Red Junglefowl—more commonly known as the chicken. From a human viewpoint, the domestic chicken is by far the most important bird in the world, the center of an industry that’s worth billions. The Ring-necked Pheasant can't compete with that kind of clout, but it shouldn't have to. As an American success story, this pheasant is deservedly popular in its own right.