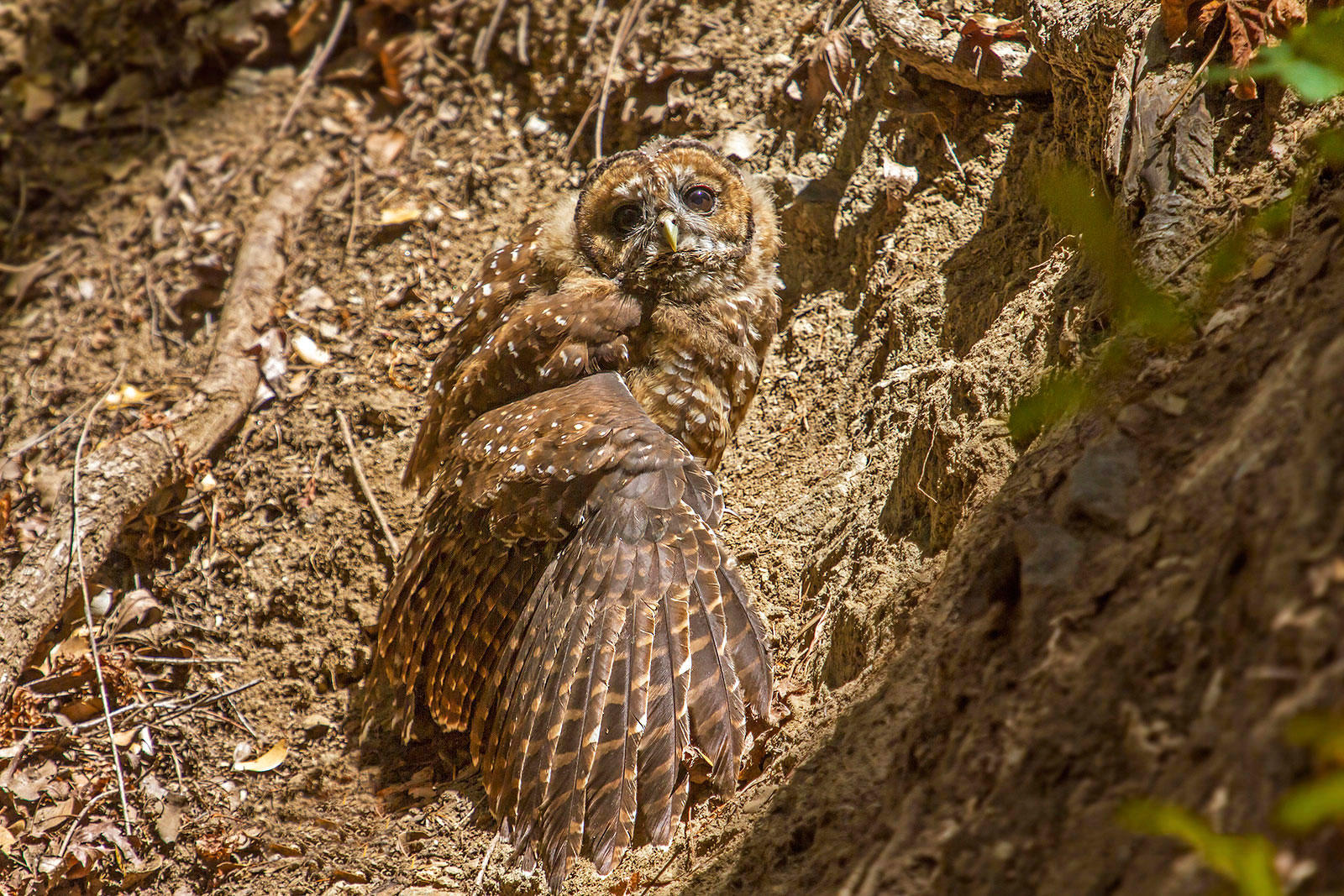 Want to Save the Spotted Owl? Stop Trying So Hard

New research shows that the California Spotted Owl may actually benefit from the forest fires the land managers have spent years avoiding.

California Spotted Owls thrive in the dense, multi-layered canopies and hushed shade of century-old pine and Douglas-fir forests—at least the 1,200 or so owls that are left today seem to. That’s why U.S. Forest Service and other land managers have worked for decades to prevent forest fire in the stands where they nest and roost: in hopes of preserving the elusive raptors.

Now recent research suggests that some of the very steps taken to protect the iconic species may actually be contributing to its well-documented decline. Suppressing fire, thinning green trees, and logging after wildfires—management activities intended to reduce fire danger—may not actually be helping the owls. In fact, according to studies published by independent scientists last year and earlier, they may be harming them more than no activity.

Their findings are so convincing that the California Spotted Owl is being considered for listing under the federal Endangered Species Act, the U.S. Fish and Wildlife Service announced in September. The research has also impacted a long-simmering controversy, spurring the Forest Service to launch development of a strategy designed to conserve the bird.

Can the Birds Handle the Heat?

The California Spotted Owl, a mottled chocolate-brown bird with a 45-inch wingspan, has lived for millennia in the forests of the Sierra Nevada and southern California. It is a cousin of the politically divisive Northern Spotted Owl, which is listed as federally threatened due to habitat loss from logging. The California species also became a conservation lightning rod in the 1990s when commercial timber companies sought to log the old-growth forests where it lives. The controversies in California and the Pacific Northwest made the species one of the best-studied owls in the world.

But little was known about how spotted owls actually respond to fire. For decades the Forest Service has managed most of its land throughout the West to suppress fire, believing that it threatens forest inhabitants and should be avoided at all costs (a topic we explored in our Sept-Oct issue).  It’s clear that California Spotted Owls have survived centuries of high-severity burns scorching entire stands, charring the trees where they nest in cavities and broken-off tops. But scientists still weren’t sure which patterns and preferences helped owls prosper most.

To find out, Monica Bond started visiting spotted owl sites in 1999. A wildlife biologist and unabashed activist, she co-founded Wild Nature Institute in 2010 to research and advocate for at-risk species and their habitat. Bond documented spotted owl foraging, habitat selection, survival and reproductive success in burned forests in California and elsewhere. Following the 2013 Rim fire, one of the largest in California in the last century, she found owls occupying 92 percent of their historical territories—a higher rate than average occupancy in an unburned forest. Severe fire, it seems, may not pose such a threat to these predators after all.

Other scientists have been conducting similar research focused on how both fire and fire suppression affect this species. Their findings are challenging the conventional thinking: California Spotted Owls are well-adapted to low- and moderate-severity wildfires, but appear to actually prefer high-severity burns for foraging. That’s because burnt forests contain tasty food: Gophers, uncommon in mature forests, grow fat on the grasses that sprout through the ashes, according to Bond's 2013 study published in Western Birds. And while owls would rather nest and roost in green forests, when severe fire burns naturally this old-growth species is one of many that benefits from the post-fire flush of nutrients and bursts of sunlight that rejuvenate forest ecosystems.

"Fire of all severities is natural in Western forests and provides a bedroom, nursery, and kitchen, as long as the burned forest is left standing," Bond says.

Putting the Findings into Practice

It's a conclusion disputed by government officials. Federal scientists recognize that spotted owl habitat is threatened by both fire itself and management to lessen its impacts, including prescribed fire and post-fire logging. But there still isn’t enough documentation to yield concrete recommendations, says Patricia Manley, a Forest Service research ecologist. The complex relationship between owls, fire, and salvage logging needs far more study and larger sample sizes to conclude that the birds can cope with burned forests more successfully than they can cope with forests that have been logged after a fire, Manley says.

Bond, however, is not alone in documenting owls' use of burned-over forests. In his 2014 synthesis of the scientific literature on the California Spotted Owl, Forest Service research ecologist John Keane noted that these birds seem able to persist in landscapes that experience low- to moderate-severity fire, as well as some mixed-severity wildfire. And although he emphasized that the cause of the species’ population decline is unknown, “it is likely that historical and current vegetation management practices (primarily timber harvest and fire suppression) are a factor,” Keane wrote.

Lately the Forest Service has recognized the positive role of fire as an ecological process and the need to improve management of the post-fire habitat. These findings, as well as Bond's research, will be considered in the California Spotted Owl conservation strategy, which could recommend limiting logging around owl habitat and curtailing it after wildfires.  Officials expect to complete the strategy late in 2016.

That leaves the immediate future of the California Spotted Owl in conservation limbo. With forest fires predicted to increase in both size and severity, this shy forest denizen may prove a guide to understanding how fires affect the landscape and the creatures that depend on it.