Watch a Black Heron Fool Fish by Turning Into an Umbrella

The behavior, called canopy feeding, is an especially effective way to hunt. 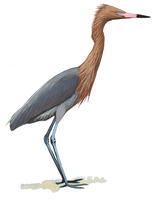 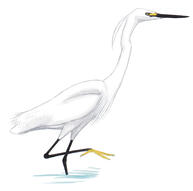 Most of the time, Black Herons look like your typical wading bird—long legs, long necks, long beaks. But when it's time to eat, this jet-black African species has a pretty nifty trick up its wings: It turns into an umbrella.

Not literally, of course. But while fishing, the bird will tuck its head down, spread its wings around its body, and create a sun shade of sorts. The behavior, known as canopy feeding, was perfectly captured in the above video by Paul Wheatley, a Leeds-based nature videographer on a trip to Gambia. The heron didn’t seem to be bothered by his presence as it fished on Lake Kotu, and Wheatley managed to phonescope four minutes of the bird swiftly covering its face before snapping up prey.

But what exactly is the purpose of this behavior?

There are several possible advantages to canopy feeding, says Kenn Kaufman, a bird expert and field editor for Audubon magazine. One commonly accepted theory is that small fish looking for places to hide are attracted to the shade created by the heron’s wings, he says.

Canopy feeding could also give the bird a better look at its prey, says Bill Shields, a professor emeritus at the SUNY College of Environmental Science and Forestry who’s studied bird behavior for 45 years.  Shields compares the behavior to people who wear polarized sunglasses while fishing. In the same way the glasses reduce glare, the shade provided by the wings could allow the bird to clearly see past the surface. Simultaneously, Shields says, the heron might also be camouflaging itself so that from below all the fish see is a single dark mass—until they’re being tossed down the bird’s gullet.

“It's all part of the hunting tactics of herons that spend a lot of time looking for particularly smaller prey just below the surface,” Shields says.

Don't know a heron from an egret? Download the free Audubon Bird Guide app to learn the songs and behaviors of more than 800 species.

Other herons like the Reddish Egret have variations on this hunting technique. Rather than carefully creeping along like the Black Heron, though, the Reddish Egret is a captivating dancer. The coastal North American wader will wildly zig-zag with its wings outstretched, often leaping to different locations to disturb and confuse the fish before forming a partial canopy. The fish will unwittingly swim toward their doom as they seek cover from all the commotion, says Lianne Koczur, a post-doctoral research associate with Texas A&M Transportation Institute who studied Reddish Egrets for her dissertation.

When Wheatley recently shared his video on Twitter, where it received more than 6,000 retweets, some people wondered about the Black Heron’s bright yellow feet: Couldn’t that pop of color alert fish that there was something unfamiliar nearby?

Alex Evans, a bird flight researcher at the University of Leeds, says the heron’s bright yellow feet might have once been used to disturb and distract their targets. The Little Egret uses a similar hunting strategy; these all-white wading birds will shuffle their feet as they walk to stir up aquatic prey, sometimes running with outstretched wings before they ambush.

While this tactic is at odds with the more patient canopy feeding observed in Black Herons, Evans wonders whether the bird once also used its feet like the Little Egret. Then, as time went on, Black Herons started canopy feeding, which proved to be a more efficient hunting method. Or maybe the heron takes advantage of both techniques to become a super hunter.

“It could also be argued that the lure of both the shade and the bright feet now work in tandem to attract fish into gobbling range,” Evans says. “It would be interesting to see an experiment that manipulated foot color and investigated how it affected canopy feeding success.”

Kaufman agrees that the different strategies could have evolved over time, and that they might provide several advantages that benefit the birds today.

One of those advantages might not even have anything to do with hunting at all. There is one more possible explanation for the Black Heron's feeding behavior that no one has mentioned yet: Maybe the birds just really enjoy a good game of “nighttime, daytime.”

Nom Nom: 22 Astonishing Shots of Birds Getting Their Grub On

The 2018 Audubon Photography Awards had its fill of food-themed submissions. These are some of our favorites.