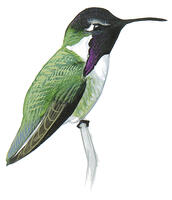 When it comes to dating, the male Costa's Hummingbird really has to go above and beyond. In this clip from a new PBS Nature documentary airing tonight, one eager male reveals a mating display that's equal parts shocking, impressive, and somewhat terrifying. While the Squid Head look might seem bizarre even for the world of birds, for the female Costa’s, it’s simply irresistible.

Like most avian suitors, male Costa’s Hummingbirds are experts at showboating. Typically, though, they woo their mates by hovering in the air before nosediving while giving off a high-pitched whistle. The mating behavior shown in this Nature preview is actually quite rare to see, says Kenn Kaufman, bird expert and Audubon field editor. “I lived in Arizona for a long time and had Costa's Hummingbirds in the backyard, and I only glimpsed this kind of display a couple of times at a distance,” he says. Kaufman thinks the display might be used during peak courtship, just before the pair copulates. That said, the female in this video doesn’t seem very impressed.

All that tentacle waving—definitely not the scientific name for it—can be exhausting, so it wouldn't be surprising if the male saves it until the very end. “This is a truly impressive aerodynamic feat, and is also very demanding considering the speed at which [the birds] perform it,” says Alejandro Rico-Guevera, a hummingbird researcher who’s featured in the episode. He explains that for the Costa’s to pull off the stunt, it must keep its beak open to increase oxygen flow. Also, the gorget feathers, which flare out, need to be held at the perfect angle against the sun’s rays for maximum effect.

Experts still aren't sure how the males lift their feathers up, but both Kaufman and Rico-Guevera agree that it involves flexing the subcutaneous muscles under the birds’ skin. Add it to the growing list of hummingbird super abilities, from spatula tongues to catatonic heart rates. See all the footage and learn more during tonight’s Nature episode (we’ll be live Tweeting from 8 to 9 p.m. EST).