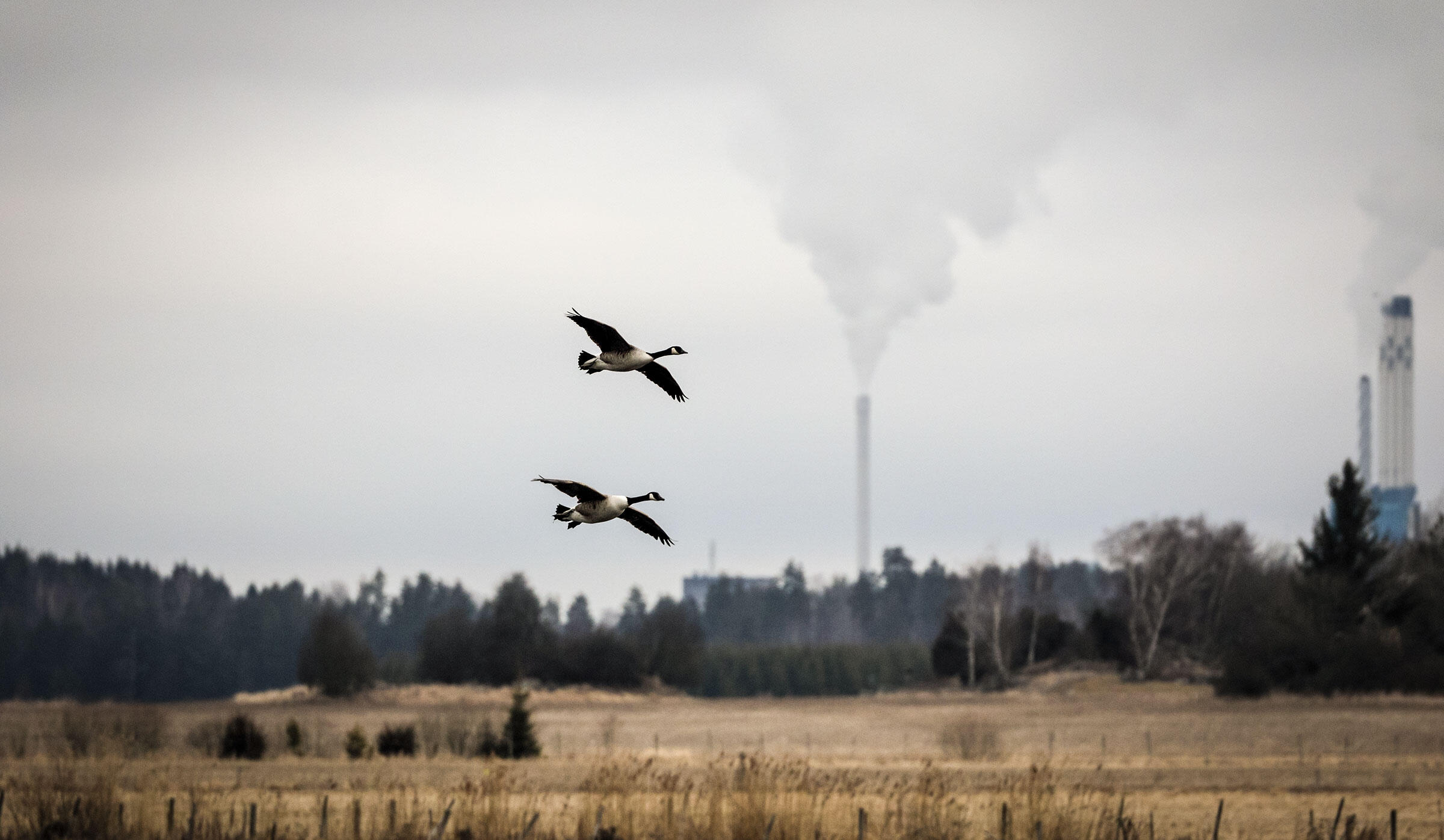 What Can Birds Tell Us About Air Pollution?

Birds are among the first to know when it gets harder to breathe. But there's little research on how they're affected and how many die.

Harjavalta, Finland has been a smelting town since the 1930s, with most of the local economy built around metal production. It’s also a favorite summer breeding spot for Pied Flycatchers. But nearly three decades ago, scientists noticed that the visiting birds weren’t having as many chicks as usual. They traced the culprit back to the town's sole copper smelter: Sulfur oxide and heavy-metal particulates from the factory were wreaking havoc on the female flycatchers’ metabolisms, causing them to produce thin-shelled eggs that wouldn’t hatch. Around the same time, a different team of scientists discovered smelter workers had higher incidences of respiratory and stomach cancers.

Both birds and people were harmed by the noxious mix of pollutants in the air—but birds showed symptoms years earlier. Today, the Harjavalta copper smelter has cut toxic emissions by nearly 99 percent. Working conditions are much safer, and the Pied Flycatcher population has slowly rebounded as well.

The events in Harjavalta, among others, shows how birds can be sentinels in hazardous situations. And yet they’re underused and understudied, especially when it comes to air pollution, Olivia Sanderfoot, an environmental scientist at the University of Washington, says. Sanderfoot spent her last year at the University of Wisconsin-Madison (UW-M) compiling more than 90 papers that date back to the 1950s. Her findings, which outline the most common impacts of air pollution on birds and gaps in current research, were recently published in Environmental Research Letters.

Sanderfoot’s work confirmed her initial concerns. “It turns out that we don’t know much about how air pollution affects birds after all,” she says. While digging through the literature, she found thousands of studies that bypassed birds and focused solely on human health. There’s a reason for that: In 2016, the World Health Organization estimated 3 million people die annually from air pollution-related illnesses. But no one has ever quantified avian mortality in the same way.

Before diving into the numbers, however, Sanderfoot had to answer another question: Why are birds more vulnerable to air contamination? To do so, she had to revisit early lessons in avian anatomy. Unlike mammals, birds inhale oxygen, exchange it for carbon dioxide, and exhale the byproducts all in one breath; they don’t have to contract or expand their lungs repeatedly. The unique technique allows them to breathe and oxygenate at a rapid rate, which is optimal for flight. But Sanderfoot also contends that the constant air flow might bring in a variety of nasty particles that lead to health issues.

Indeed, respiratory illness was the most frequent problem Sanderfoot found in her review, followed by increased stress levels, poor immune systems, reduced reproductive success, population declines, and more. The studies analyzed a few dozen species from all over the world (though most were concentrated in Europe). While there was clear historical evidence of air pollution being detrimental to birds, there were still major gaps in connecting avian and human health.

“We don’t have enough evidence on birds dealing with the top-priority chemicals that hurt humans,” says Tracey Holloway, a professor of atmospheric and oceanic sciences at UW-M and coauthor of the review. Surface-level ozone and particulate matter (PM) wreak havoc on human respiratory systems and probably take out just as many birds lives each year, she notes. More avian research on these pollutants would help scientists get a better idea of the global state of birds—something that Holloway and Sanderfoot are all for.

But showing causation is a feat in itself. Birds and air particles are both changing mediums: Neither stays in place for very long. This makes it difficult to pinpoint which chemicals hurt birds in the long term. In the case of the flycatchers, the scientists already knew where they bred each year and what pollutants spewed out of the smelter. Without establishing those patterns, it’s nearly impossible to know where birds might pick up specific particles.

One way to go about it is to hone in on the most polluted sites they spend time in, which are typically cities, industrial sites, and developing nations. “The health of migratory birds is only as good as the worst place they spent time during their full annual cycle,” David Mehlman, director of the Migratory Bird Program at the Nature Conservancy, says. Another option is to incorporate better technology to understand what exactly is wafting about in the air. Sanderfoot and Holloway both recommend ramping up field monitoring, data collection via satellites, and computer modeling to track global air pollution and then map it against bird occurrences pulled from ornithological surveys. Field monitoring measures ozone and PM levels, satellites read carbon monoxide and nitrogen dioxide concentrations near the Earth’s surface, and computer models compare the past, present, and future in air-quality trends.

Ultimately, these holistic methods can inform conservationists and lawmakers to produce policies that protect people and wildlife. In a way, we’ve already seen how research on people breathing toxic air brought about change in the United States, Rob McDonald, lead scientist for the Nature Conservancy’s Global Cities Program, says. He points to the Environmental Protection Agency’s Clean Air Act as an American success story. “Our air quality is much better than it once was,” McDonald explains. “Now nations like China and India are taking some action and informing the public about clean air.”

Although air pollution is a global concern, Sanderfoot is picking up the local fight, too. As an educator with the Madison Audubon Society this past spring and summer, she visited community centers to teach kids how to curb air pollution by driving less, planting more natural habitat, and cutting back on energy use—all to save birds. A little work can go a long way, but above all else, she urged the students to find hope in every feathered creature they saw. “Because when birds flourish," Sanderfoot says, "we can all breathe easier.”

Helping birds is easy! Just start growing native plants today. Type your zipcode into our handy database to discover which native plants in your area will attract certain types of birds—and where to buy them.