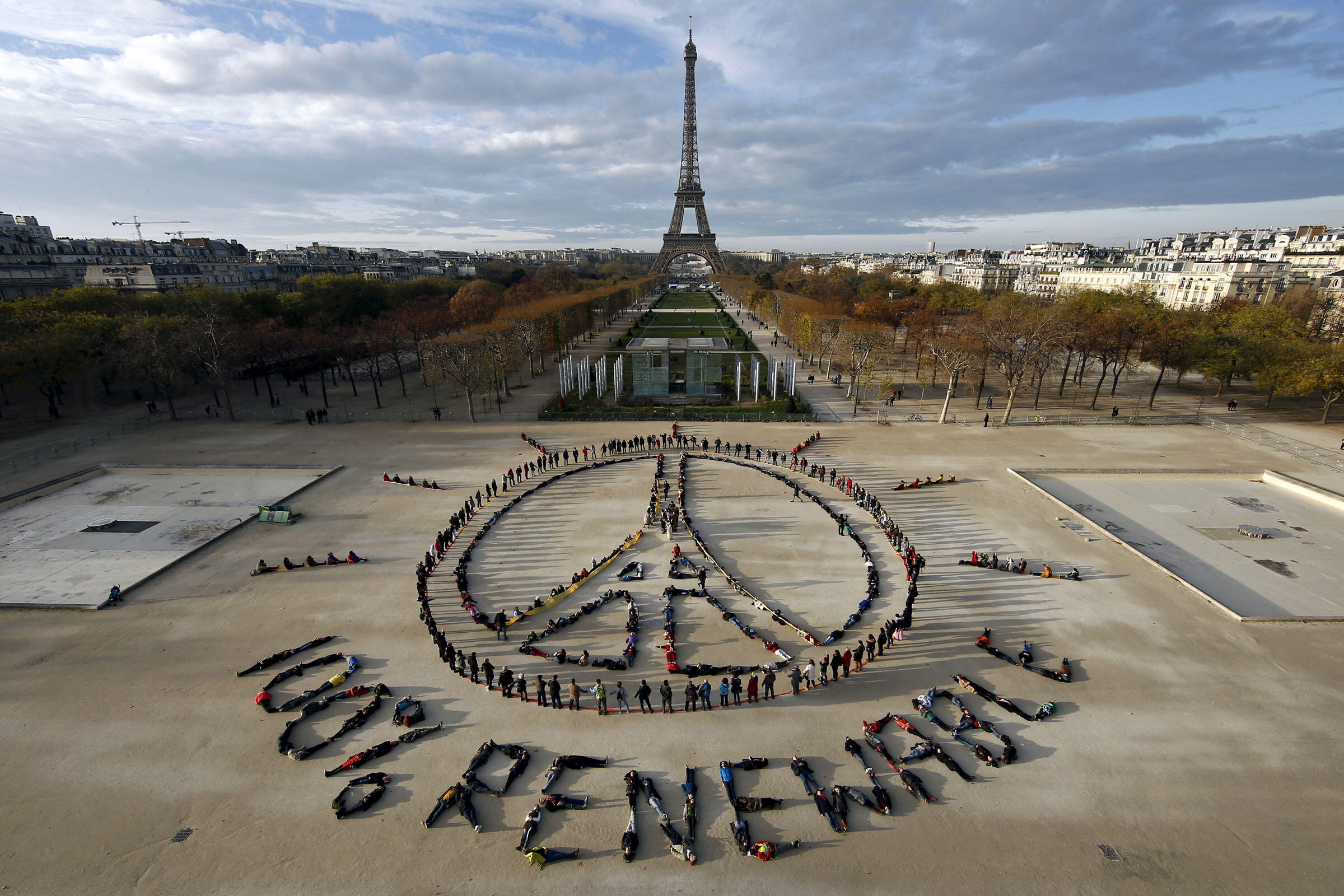 In front of the Eiffel Tower, environmental advocates arranged their bodies to spell out the message "100% Renewable" during COP21 talks. Hundreds of thousands of people worldwide joined earlier demonstrations calling for action on climate change. Photo: Benoit Tessier/Reuters

What Does the Paris Climate Deal Mean? Here's What We Know.

The agreement is a big deal for birds and our planet—but there’s plenty of work ahead to make it stick.

On December 12, after almost two weeks of wheeling and dealing, nearly 200 countries approved the Paris Agreement to rein in greenhouse gas emissions and limit global warming. The meeting could easily have devolved into bickering and bitter recriminations, as many climate talks have in the past. Instead, what emerged was a substantial agreement to cut greenhouse gas emissions, limit the rise in global temperatures to less than 2 degrees Celsius, fight deforestation, and provide financial aid to developing countries. It won’t save the planet overnight, but the Paris Agreement is a big step forward to fight climate change and protect the birds threatened by it.

Two Degrees Celsius and No More

InsideClimate News reporter John H. Cushman, Jr., writes that the Paris Agreement “may be the most historic global treaty since Versailles,” while also being clear-eyed about how much work lies ahead. He lays out the basics of the agreement:

It would limit emissions from burning fossil fuels and clearing forests so that warming is contained to no more than 2 degrees Celsius compared to pre-industrial times and—in even higher ambition—to try to keep the rise below 1.5 degrees Celsius.

That means seeking what the treaty calls a "balance" between sources of carbon like the burning of coal, oil and natural gas, and its absorption from the atmosphere by forest growth, or, possibly, techniques like capturing emissions of CO2 and burying them in the ground.

That would mean that sometime in the second half of this century—the sooner the better, if the 1.5 Celsius target is to be met—there should be no net additions of greenhouse gases to the atmosphere.

How the Climate-Agreement Sausage was Made

Ben Adler at Grist digs deeper into the details of the final agreement, explaining the provisions and what might come next. Here’s his take on whether we should be popping the champagne to celebrate:

The bottom line is that the agreement gets us far closer to containing climate change than we were two weeks ago, but still far short of where we need to go. In fact, we won’t even know for years what it will accomplish. How much the agreement reduces greenhouse gas emissions, and through that reduces warming, will depend on whether countries meet their targets for curbing emissions and deploying renewable energy and whether they ramp up their ambition in the years ahead.

An Agreement is Nice, but We Need to Make Sure Leaders Stick to It

Bill McKibben, founder of 350.org, highlights the gap between the pledges that nations have submitted to cut their emissions and the real-world cuts necessary to keep warming below 2 degrees Celsius. He sums up the gap in relatable terms:

The world is a doughy fellow who has promised to drop three suit sizes in time for his wedding, which is now only a month away. The world is an anxious student who has to ace the next morning’s test to pass the course but hasn’t yet started to study. The world has promised his kids a great raft of presents under the tree, but now it’s suddenly Christmas Eve and the shops have started closing.

But McKibben also sees hope in the potential to use this agreement as a lever, to push world leaders to keep their promises about cutting emissions.

[If] you want to be cynical about the Paris agreement, there’s plenty of reason.

But if you want to be hopeful, here’s the thing: The world’s governments have now announced their intentions. And so the rest of us can hold them to those promises, or at least try.

What Does This Mean for Birds?

While the Paris agreement is certainly a good development, it might feel a little removed from its importance to birds. To bring that point home, BirdLife International tackles this question with several of their experts weighing in. Here’s Edward Perry, BirdLife’s global climate change policy coordinator: