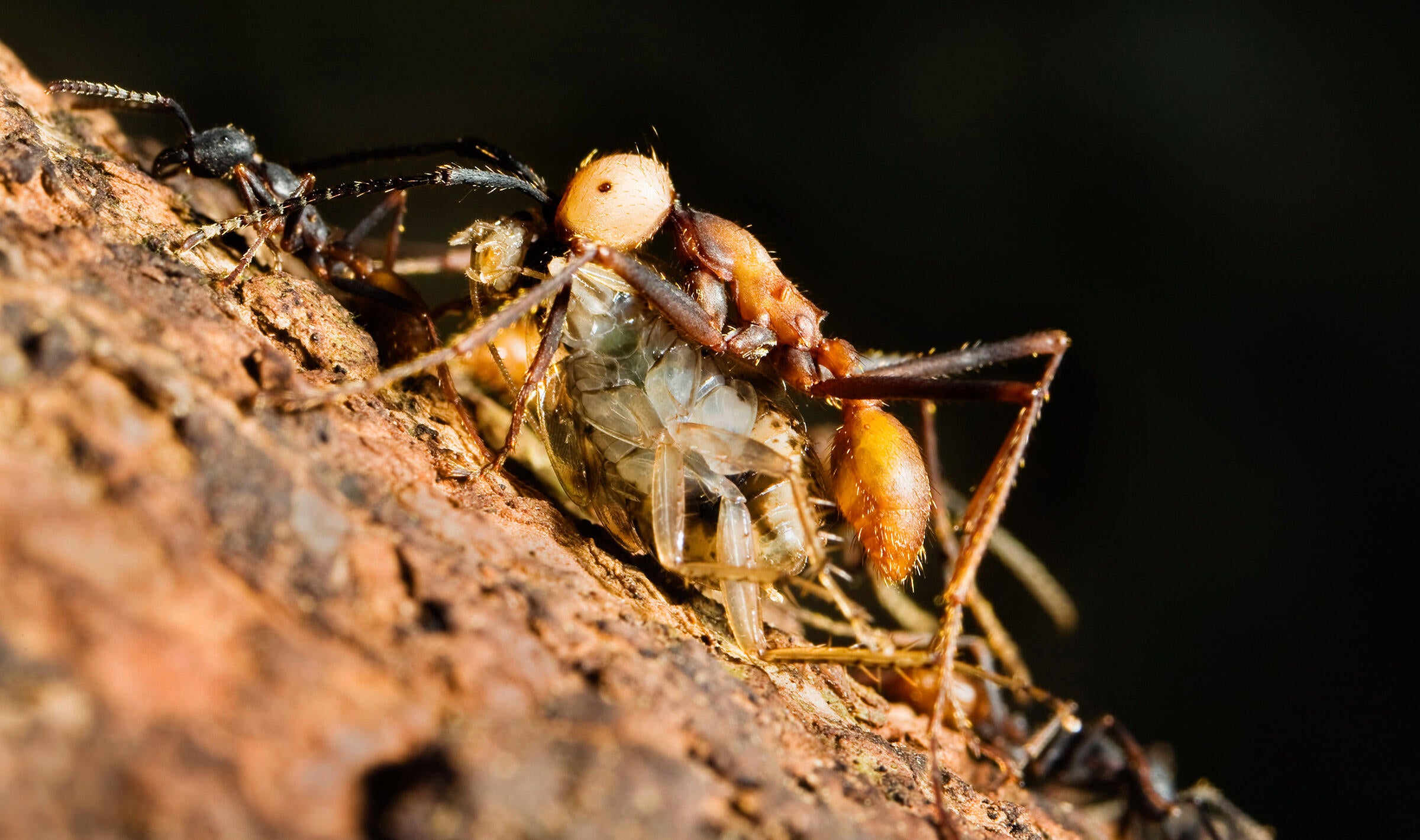 An army ant devours its prey in the rainforest of Costa Rica. Photo: Konrad Wothe/Alamy

What's an Antbird Without an Ant?

In Costa Rica, dozens of bird species rely on army ants to lead them to food. What will happen if global warming drives the ants away?

Thousands of pincer-jawed, carnivorous army ants regularly swarm across forest floors in Central America, foraging for wasps, less fortunate ants, and other arthropods. As they go, they flush hordes of fleeing insects into the surrounding foliage, serving up a convenient feast for the forest's birds, which follow in their wake. As many as 50 bird species are known to use the ferocious insects as a way to find their food, some of them so dependent on the ants that the relationship is built into their name—among them the Spotted Antbird, the Ocellated Antbird, and the Bicolored Antbird.

As the world warms, says Kaitlin Mari Baudier, that relationship could be compromised. Baudier, a Ph.D. student at Drexel University, is an author of a paper published last month in the Journal of Animal Ecology that digs into how well different species of army ants can tolerate rising temperatures—a question that may have implications not just for the ants themselves but for the hundreds of other species that depend on them, from the birds that follow the ants to food to the beetles and millipedes that depend on the ants’ nests for shelter.

Working from Monteverde, Costa Rica, Baudier and her colleagues collected dozens of specimens from each of the country’s nine army ant species, which can be split roughly into three groups: those that forage—or “raid”—and nest above ground; those that are almost totally subterranean; and those that live in between, raiding at the surface but nesting underground. (Baudier’s team baited the subterranean ants with some pungent tuna oil.) They also recorded the temperature at each capture site continuously during the course of the study, to record the maximum temperatures the ants experienced in each microhabitat.

Baudier and her team then moved to the lab, where they simulated the effects of rising temperatures by putting each ant in a vial placed inside an aluminum heat block preheated to 30 degrees Celsius. They then raised the temperature by one degree Celsius every 10 minutes. The temperature at which the ants stopped being active signaled the upper limit of what they could survive in the real world, says Baudier.

Baudier found that the ants’ respective microhabitats shaped the way they dealt with heat. Subterranean species, which are insulated from above-ground heat spikes and thus haven’t adapted to higher temperatures, had a lower temperature limit than surface-raiding species. This kind of distinction may be important when it comes to developing models to determine how global warming may affect a species. “Models that predict large-scale impacts of climate change worldwide often treat species at a given site as uniform in their response to warming,” says Baudier. But her research reveals that the dynamic is actually much more complex, at least in the case of army ants. She theorizes that may be true of other animals as well.

The other factor that determined how well the ants tolerated the heat, Baudier found, was their size; the smaller individuals were more sensitive to heat than their larger cohorts, and that was especially true for smaller surface raiders. Some of these ants, Baudier found, are already pushing the limits of their tolerance in the current temperature range of their habitat. Her results suggest that even small future temperature increases could have sizable effects on these ants. “Small castes of surface raiding species will likely experience the highest impacts of increasing environmental temperatures,” Baudier says.

Baudier isn’t yet sure how her findings could play out in the real world, but she suspects that rising temperatures will influence where army ants choose to nest and forage. Ultimately, they might migrate away from their current habitats to higher, cooler environments, or reduce their surface-raiding activity. Or the heat might simply wipe them out.

What is certain is that if army ant populations do decline or relocate en masse, it’s not only birds that will be affected—the forest ecosystem will feel the loss. Army ants are a keystone species, explains Baudier; take them out of the equation, and hundreds of other species will likely face fluctuations in food availability and predation pressure. “It’s hard to think of another single group of animals in tropical forests," says Baudier, “whose impact on other species is quite so high as the army ants.”