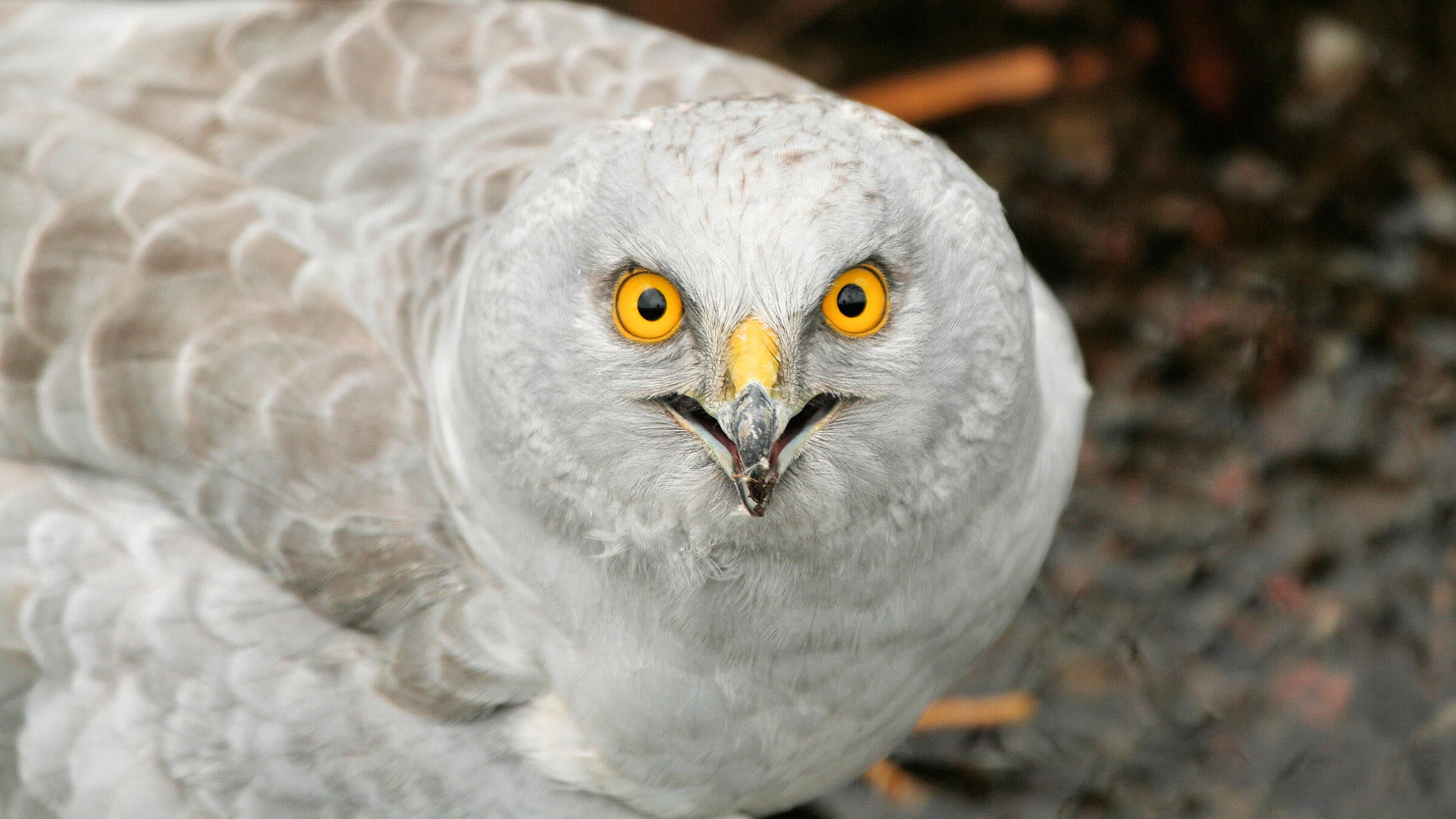 A wildlife crime drama is unfolding in Britain, as harriers go missing on the increasingly perilous moors.

You’d be hard-pressed to find a bird that beats the Hen Harrier for sheer eeriness (as you can read all about in this week’s Sketch). In the U.K., the raptor is known as the  “ghost of the moor” for its habit of appearing and disappearing in the mist that shrouds the hilly landscape running through Northern England, Wales, Northern Ireland and Scotland. Lately, though, the “disappearing” part has become a major problem: In recent years, Britain's Hen Harriers have been vanishing at an unprecedented rate, especially in England, where declining numbers and failed nests have left the birds teetering on the brink of regional extinction.

The saga of the vanishing Hen Harriers has all the makings of an English country mystery—except that it isn’t such a mystery after all. Conservation groups say they know, for the most part, what’s happening to the harriers: They’re being killed off by humans who see these birds as unwanted competition. That’s because Hen Harriers hunt grouse, which places them in direct conflict with landowners who cultivate the plump birds for the purposes of grouse hunting, an expensive sport that rakes in millions each year.

“It’s one of the most intractable problems in English conservation,” says Charlie Moores, founder of Birders Against Wildlife Crime—one that hasn’t been helped by laws that impose heavy fines and even jail time for killing the birds. If regulation hasn’t worked, can anything be done to save Britain’s harriers?  Here's what you need to know about the threat facing the Hen Harriers, and the fight to protect them.

How the hunter became the hunted

Harriers have always been a thorn in the side of people trying to tame Britain’s wild moors—the birds got their name from their habit of harassing chickens back in the 1800s, when much of the land was first given over to agriculture. Harriers were similarly unwelcome on the great estates established around the same time, where grouse hunting became a popular pastime for the wealthier members of British society. So humans began killing the competition. “Once the estates became established it was open season on Hen Harriers,” says Moores.

By the early 1900s the once-abundant birds were virtually extinct in the United Kingdom, save for fragmented populations on the remote Scottish islands of Orkney and the Hebrides. After World War II, harriers ventured back to the British mainland, where they benefited from new legislation like the Protection of Birds Act, which safeguarded certain wild birds. But then, in the 1990s, the harrier population began to dwindle again. Today there are fewer than 700 breeding pairs in the whole of the U.K., and the majority of them are in northern and western Scotland.

“In England the situation is critical,” says Jeff Knott, head of nature policy at the LIFE Project with the Royal Society for the Protection of Birds (RSPB), which protects harriers in at-risk areas. Technically, there’s enough suitable habitat in England to support more than 300 pairs. But for the past five years there haven’t been more than six nesting pairs in the country annually, and in 2013 there wasn’t a single successful breeding pair.

Why all eyes are on the estates

These days, grouse hunting isn’t just a pastime—it’s an industry, and a very lucrative one. (Moores estimates that the average grouse has a £200 ($315) price tag on its head.) On hunting estates, gamekeepers are tasked with maintaining the grouse populations, often cultivating the birds in huge numbers to allow successful “driven” grouse shooting, a hunting method that relies on flushing out hundreds of birds and steering them directly into the hunters’ path, so they can bag tens at a time. “What the gamekeepers do to produce this massive number [of grouse] is to give them absolutely favorable conditions,” says Moores, “and the principle of these favorable conditions is to remove all the natural predators.”

In 2008, Natural England, the government’s official adviser for the environment, issued a major report showing that persecution on grouse moors was the primary reason Hen Harriers failed to breed. And between 1990 and 2012, 70 percent of the 152 people convicted of killing birds of prey were gamekeepers, according to the U.K. government’s environmental audit committee.

Killing a harrier comes with a heavy fine ($7,900) and even jail time in extreme cases. But there’s an inherent problem in enforcing such laws: Harriers are relatively easy to murder, yet the crime is difficult to solve. There are also allegations from groups like the RSPB that the culprits destroy bird carcasses and their satellite tags to make the deaths untraceable. Between 2007 and 2014, government records show that 28 tagged harriers were listed as "missing" across the U.K., and so far in 2015 alone, five tagged breeding males have disappeared from monitored nests in England. Several harrier carcasses that have been discovered over the years by conservation groups have been poisoned, shot, or beaten to death.

Certain hunting interest groups like the British Association for Shooting and Conservation openly condemn wildlife crime, and others have joined forces with conservation groups like the RSPB to monitor nests on moors. But overall, hunting groups tend to sidestep the problem of harrier persecution, instead emphasizing the birds’ detrimental impact on grouse populations or championing the conservation benefit of managed moorlands.

How conservation groups are trying to save the Hen Harrier

To address the problem, the British government has suggested a controversial “brood management” program, which requires removing harrier chicks from their nest, raising them in captivity, and re-releasing them away from estates. But the RSPB says this ignores the fact that the real issue is illegal persecution by humans. Instead, organizations like RSPB and BAWC want the government to implement “vicarious responsibility,” a legal arrangement that would hold estate-owners accountable for any wildlife crimes committed on their lands.

The RSPB also wants to create economic consequences for harrier persecution by requiring grouse estates to have a hunting license to operate, which will be seized if illegal activities occur on the property. As it stands, grouse hunting is “a highly unregulated industry in this country,” says Ruth Tingay, a U.K.-based ornithologist and independent researcher in raptor conservation. In her estimation, the only thing to be done is implement a full-out ban on driven grouse hunting.

As the larger policies are debated, several small-scale projects are underway to protect harriers. On a handful of moors, landowners and gamekeepers are cooperating by practicing diversionary feeding, a tactic that uses fresh meat to distract harriers from grouse. (On moorlands where this technique has been tested, such as the Langolm Moor Demonstration Project, predation of grouse has been "negligible," according to the RSPB.) Through the RSPB’s LIFE Project, in June and July conservationists were able to attach satellite trackers to several harrier chicks across the U.K. for the first time, allowing a new generation to be monitored online. “The technology is getting better all the time, so we are getting closer to having real-time information on what is happening to these birds,” says Knott.

Awareness-raising events like the annual Hen Harrier Day are also inviting people to defend the imperiled species. And because of their rampant persecution, harriers have also become the symbol of a movement against the general decline of moorland habitats. “It’s not just about the Hen Harrier; it’s about lots of other upland species,” says Tingay. If wild lands become safer for harriers, other threatened animals like the Golden Plover and the curlew will also begin to thrive there once again. As Knotts puts it, “We want to make people aware of what is missing.”