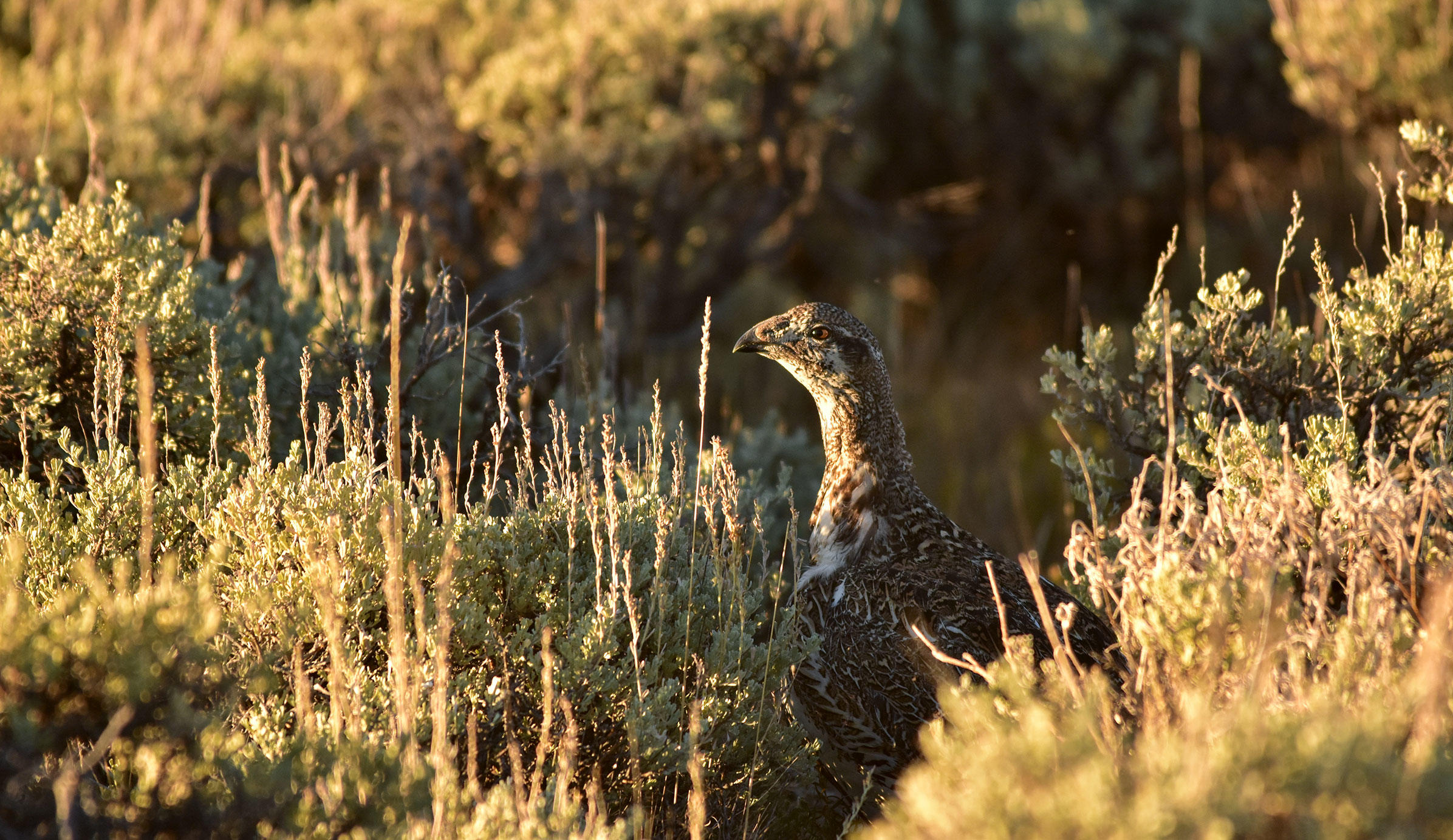 To save the sagebrush—the staple habitat of the Greater Sage-Grouse—from increasing wildfires, land managers may have to remove it from some areas of the Great Basin. Photo: Tom Koerner/USFWS

With Few Options, the BLM Is Mulling Firebreaks to Battle Sagebrush Blazes

The Bureau of Land Management has proposed cutting huge swaths through six Western states and thousands of acres of sage-grouse habitat.

How do you fight a fire ripping through a 135-million-acre grassland tinderbox?

It’s a question that federal and state agencies in the Great Basin are scrambling to answer. With sagebrush wildfires spreading fast across the West (recent blazes have scorched as many as 30,000 acres in a day), and climate models projecting a 9-degree-Fahrenheit increase in the region during the next century, land managers are concerned that blazes like the Soda fire of 2015, which burned an area greater than New York City in half a week, will become more common.

“We’re seeing the future right now,” says rangeland ecologist Mike Pellant. If a solution isn’t found in time for the next dry season (late summer to fall), more human lives and livelihoods will be at risk. The fires also threaten a landscape that’s critical to more than 350 species, including the declining Greater Sage-Grouse.

“At the rate of several million acres a year, we just can’t keep up with it,” says Jonathan Beck, a project manager for the Bureau of Land Management (BLM) in Boise, Idaho. Looking to be proactive, the department is proposing wide-scale firebreaks in Idaho, Nevada, Oregon, Washington, Utah, and California.

Firebreaks are strips of land where highly flammable, woody vegetation is trimmed down or removed and replaced with more burn-resistant plants. Ideally, they would restrict the flames to a section that firefighters can better manage. The breaks the BLM is planning would be up to 500 feet wide and would trace miles of existing roads.

It’s not the most sustainable option, considering the risks such large-scale, intrusive land management poses. “You’re creating a whole new set of problems when you install firebreaks in an ecosystem,” says Alison Lyon-Holloran, executive director of Audubon Rockies. She’s worried that that cutting football-field-wide swaths through existing vegetation could further fragment a habitat that’s already facing numerous challenges. But so far, there seem to be few worthy alternatives. “We’re down to our last resorts, and this may be one of them,” Lyon-Holloran says.

It’s a familiar story out West: The wildfires are getting bigger, and the burn season is getting longer. The dilemma in the Great Basin, however, is made worse by one significant factor.

“Every time [the sagebrush] burns, the cheatgrass takes over a little more until eventually we have nothing but an area dominated by cheatgrass,” Beck says. The undisputed bane of the West, the species was introduced in the 19th century by European ranchers looking for cheap cattle food. It now reigns over 75 million acres—more than half of the Great Basin.

Whereas sagebrush is a perennial that remains green all year, cheatgrass is an annual that dries out in early spring, fueling a longer fire season. It produces countless seeds and rebounds within weeks of being burned. Native sagebrush, on the other hand, takes years to reestablish.

That cycle of more cheatgrass leading to more fires has already made its mark. In 2015, wildfires burned 562,734 acres of native habitat, according to the Sage Grouse Initiative. In 2016, 626,268 acres were lost. Last year, the number topped more than 2 million acres.

Besides feeding the flames, cheatgrass offers little benefit to the intricate sage ecosystem. “The safety of a sage-grouse is utterly dependent on its cryptic coloring and cover from overhead predators,” says Brian Rutledge, Audubon vice president and director of the Sagebrush Ecosystem Initiative. “If the birds didn’t get burned up in the fire, there’s nowhere to hide eggs in cheatgrass.” And unlike soft sage leaves, the grass provides little nutrition for the bird species.

The BLM sees the firebreaks as an initial step, after which the focus will turn to restoration within the cordoned sections. This could involve spreading herbicides, turning out cattle for targeted grazing on invasive weeds, and seeding native brush. “I would like to see us on a trajectory where we produce more sagebrush than we lose in a year,” Beck says.

The breaks themselves will need to be maintained, and that makes some people, including Dan Morse, conservation director for the Oregon Natural Desert Association, especially wary. “The worst of all outcomes is to build a bunch of these, fail to maintain them, and then end up with cheatgrass highways that are making the situation worse instead of better,” he says, citing a five-mile-long, overgrown firebreak north of Lakeview, Oregon. “Ironically, it’s probably the place most likely to burn.”

Save for a cure for cheatgrass, Rutledge says firebreaks may be the best available option as long as they’re carefully carved to preserve old, established stands of sagebrush and of course, well-maintained. “Fragmentation overall is the biggest issue for sage-grouse,” he says. Plus, it’s easier to manage a firebreak than a wildfire.

The BLM is currently conducting a year-long assessment of the risk and impacts of the firebreak proposal. Public comments will be accepted through March 1.