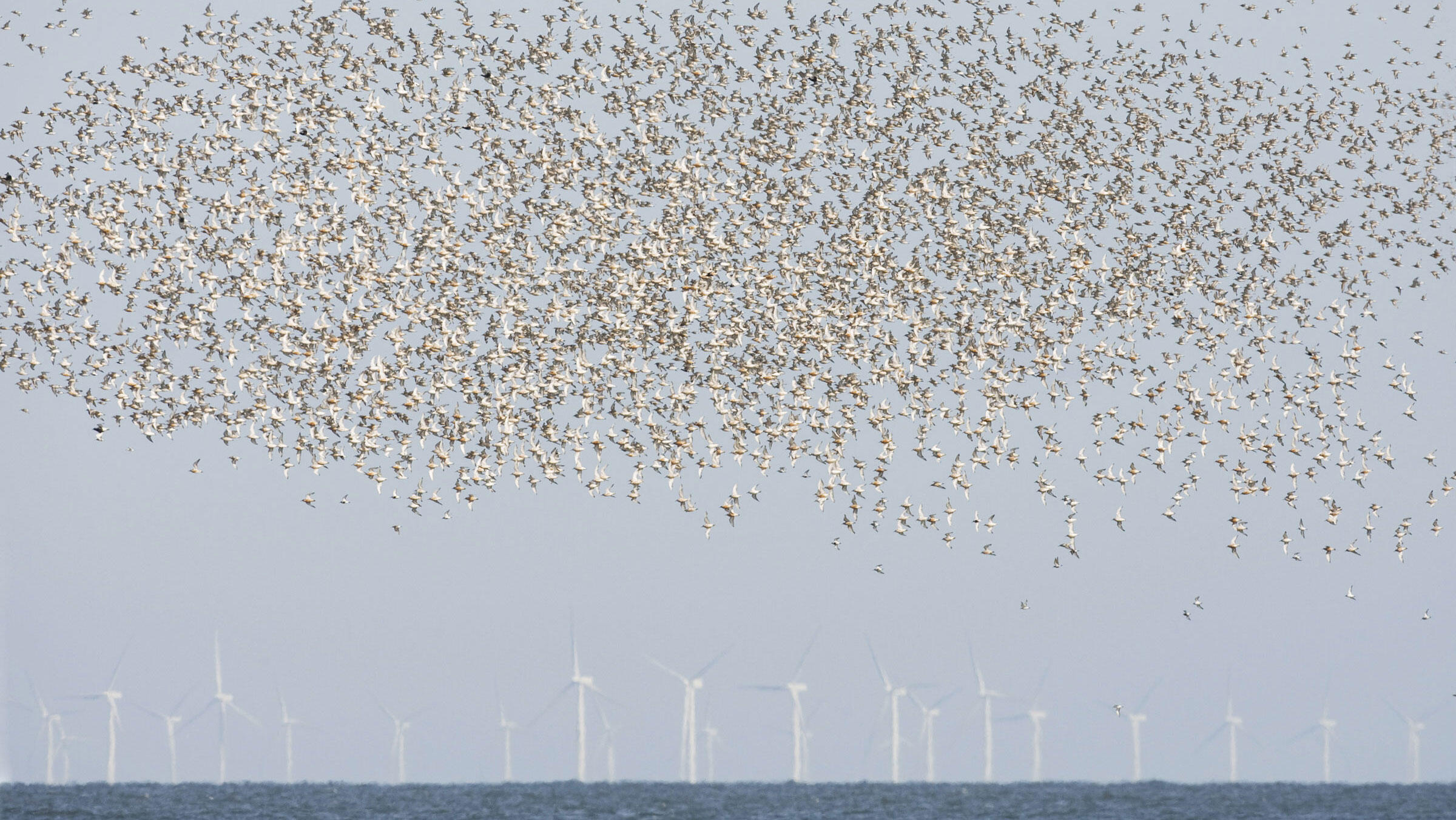 To realize the impact that coastal turbines have on birds, a wider variety of pelagic species needs to be studied. Red Knots, shown here in front of the Sheringham Shoal offshore wind farm in Norfolk, England, are one of those species. Photo: Roger Tidman/FLPA/Minden Pictures.

Some birds dodge turbine blades, but others alter their routes to avoid them altogether. 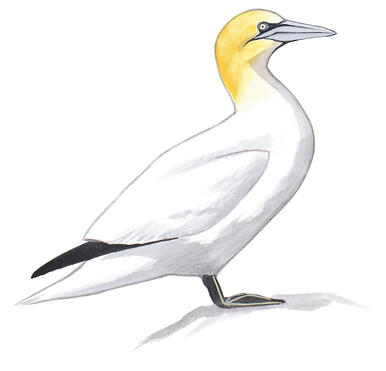 Coming soon to the British coast: the world’s biggest offshore wind farm. A swath of 400 turbines, spread across 430 squares miles of sea, will be planted in the North Sea. The mammoth venture, called the Dogger Bank Creyke Beck Project, got the go-ahead last week from the U.K. government. A start date hasn’t been issued yet, but it will likely be several years before construction begins.

Wind power has been on the rise in the United Kingdom; there are already 22 farms in the surrounding seas. But ever since researchers produced an extensive review of massive offshore farms and revealed that they alter the way seabirds behave, conservationists are taking a closer look at the Dogger Bank project.

Aonghais Cook is a research ecologist with the British Trust for Ornithology and a coauthor of the study, which was carried out last year for the Scottish government by the BTO and the Environmental Research Institute at the University of the Highlands and Islands. “Basically, we’ve done a review of all the evidence that’s been published on birds around wind farms,” Cook says.

He and his colleagues pored over data collected via visual surveys, boat surveys, cameras mounted on wind turbines, and bird radar tracking to identify species of birds flying near offshore wind farms and gather a head count.

Ultimately, they decided to home in on five oft-seen species: Northern Gannets, Black-legged Kittiwakes, Lesser Black-backed Gulls, Herring Gulls, and Great Black-backed Gulls. “These are the five species that everyone sees as having the highest collision risk,” Cook says. This assessment is based on how high each species flies and what routes it travels by—two factors that put the birds in the vicinity of offshore wind farms and their swiftly rotating blades.

But what the researchers found was shocking. Of the surveyed birds, 99 percent either avoided wind farms entirely or successfully dodged the blades. “One of the most striking things we found was that gannets tend to very strongly avoid entering a wind farm,” Cook says. The gulls and kittiwakes, on the other hand, were bolder; they pushed right on through, flying between the turbine towers.

Yet Cook says that this shouldn’t suggest that wind farms go unscrutinized. “Ninety-nine percent sounds like a massive percent, but if you’re getting hundreds of thousands of birds passing through a wind farm, the one percent that doesn’t avoid it is still quite a high number.”

Besides, blade collisions aren’t the only threat that wind farms pose. “There are a variety of impacts on birds,” Cook says. “One aspect is the collision, but there are also things like displacement: Birds no longer have access to their preferred foraging areas. And there’s also a barrier effect.”

Take gannets, for example. Wind farms act as barriers in their flight path, causing them to take a more circuitous route. It’s more than just an inconvenience: It could strip them of the energy they need to continue the journey, forage, or feed their chicks properly, Cook says.

Seabirds may also be displaced from their foraging grounds by masses of turbines built into the sea, Cook points out. “Gannets forage almost exclusively offshore, so they’re potentially going to overlap quite heavily with wind farms.” That’s true for birds like puffins and guillemots, too.

There’s still a lot researchers don’t know about the effect of offshore turbines on birds: This study focused on only five species, after all. The true scale of the impact on bird can’t be known until more research is carried out on a wider variety of species. Till then it is “vital that individual developments avoid the most important places for seabirds. Impacts on seabirds must be reduced significantly if offshore wind is to realize its full potential of delivering much-needed sustainable renewable energy,” said Aedan Smith, head of planning and development at the Royal Society for the Protection of Birds, Scotland, in an interview with the BBC.

By revealing the details of how birds avoid wind farms and the ensuing impacts, the study provides a wealth of information for the Dogger Bank developers. The BTO was involved in the environmental impact assessment for the recently approved project, says Cook; it’ll likely keep an eye on the construction as it unfolds.