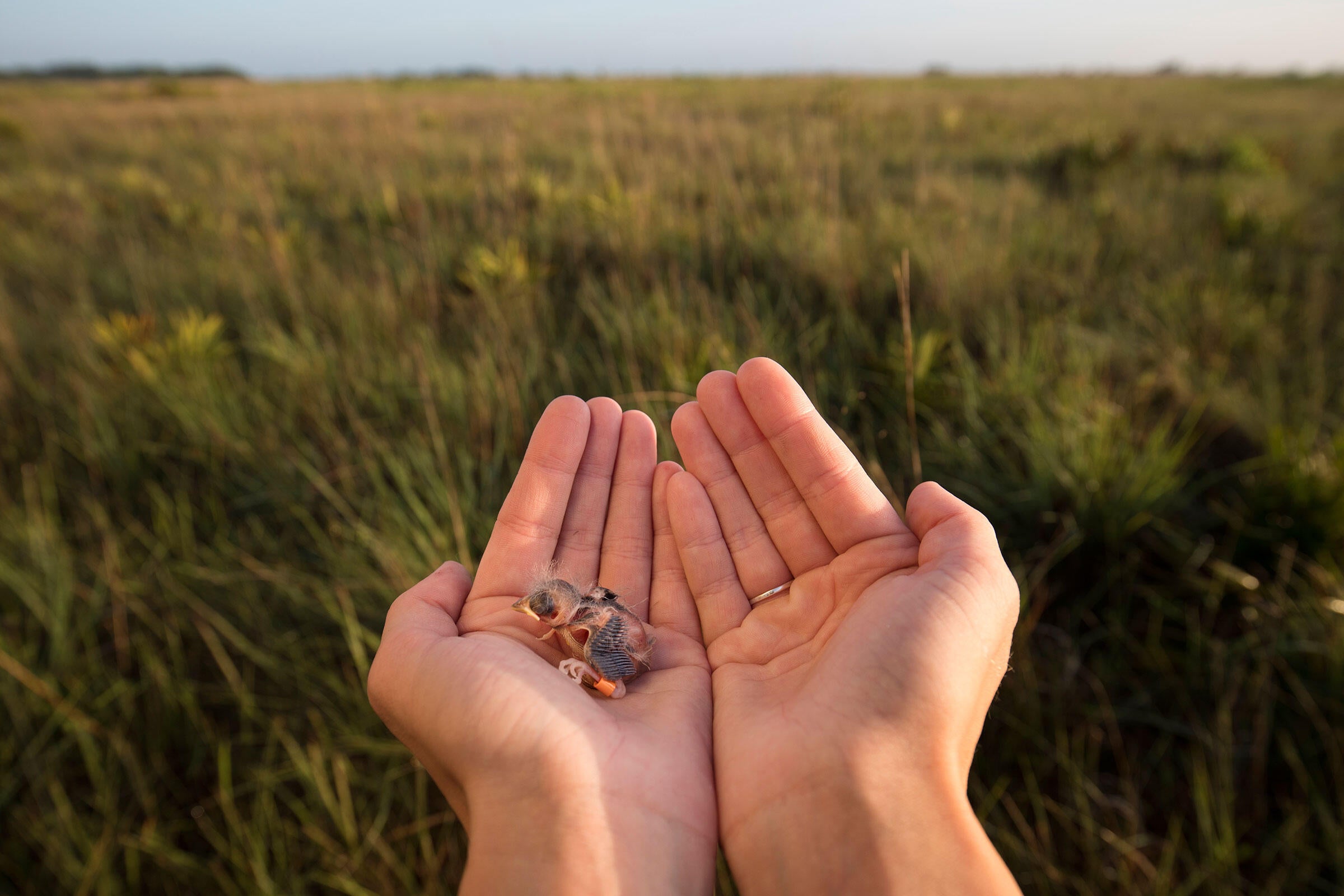 A U.S. Fish and Wildlife Service scientist holds a wild Grasshopper Sparrow hatchling in south Florida. Due to fire ants and flooding from recent rains, this chick along with its two siblings and parents were relocated to be raised in captivity at the Rare Species Conservatory. Photo: Mac Stone

These birds are barely hanging on in the wild, but there’s still hope.

In the spring of 2013, Ted Williams's cover story of our “Why Birds Matter” special issue was an urgent report that explored whether the Florida Grasshopper Sparrow was doomed to suffer the first avian extinction in North America since the last known Dusky Seaside Sparrow died a quarter-century earlier. That wake-up call was made all the more powerful by the photography of Joel Sartore, who was then seven years into his ongoing Photo Ark Project—a goal of which is nicely expressed in a comment he made to Williams while they pursued the sparrow: “Maybe if I can get people to fall in love with animals like the Florida Grasshopper Sparrow, we can save a few,” he said. In fact, the story did make a measurable impact: Funding from the U.S. Fish and Wildlife Service (USFWS) for recovery work, which had been negligible, increased to more than a million dollars over the next four years. “The jump in funding was largely thanks to the Audubon story,” says USFWS recovery biologist Sandra Sneckenberger.

The money paid for some creative and dogged interventions on the sparrow's behalf, and for research that revealed much (but also not yet enough) about what might account for its decline. It also funded the creation of a captive-breeding effort as a reservoir against extinction. Late this past spring, a one-two punch of bad news arrived that persuaded me that it was time for another wake-up call. First, Sneckenberger and her colleagues learned that their funding was drying up. Then the season's first count of sparrows revealed that they were still in rapid decline. I flew to Florida to report on the race to gather enough wild sparrows to give the captive-breeding program the greatest possible chance of success. What I learned convinced me that while the Florida Grasshopper Sparrow's prospects are indeed dire, as long as the program is able to continue, hope is not lost.

For the cover in 2013 we used a classic Sartore shot of a gorgeous grasshopper sparrow held in the “photographer's grip.” This time, photographer Mac Stone arrived at the captive-breeding facility just in time to catch this issue's cover image of one of the first-ever sparrow chicks to be artificially incubated from the moment it was laid to a successful hatching. But it was also wasting away due to a mysterious inability to process nutrients. Moments after the photo was taken, the chick was euthanized to end its suffering. It's not an easy image to see, but I do hope you won't look away.