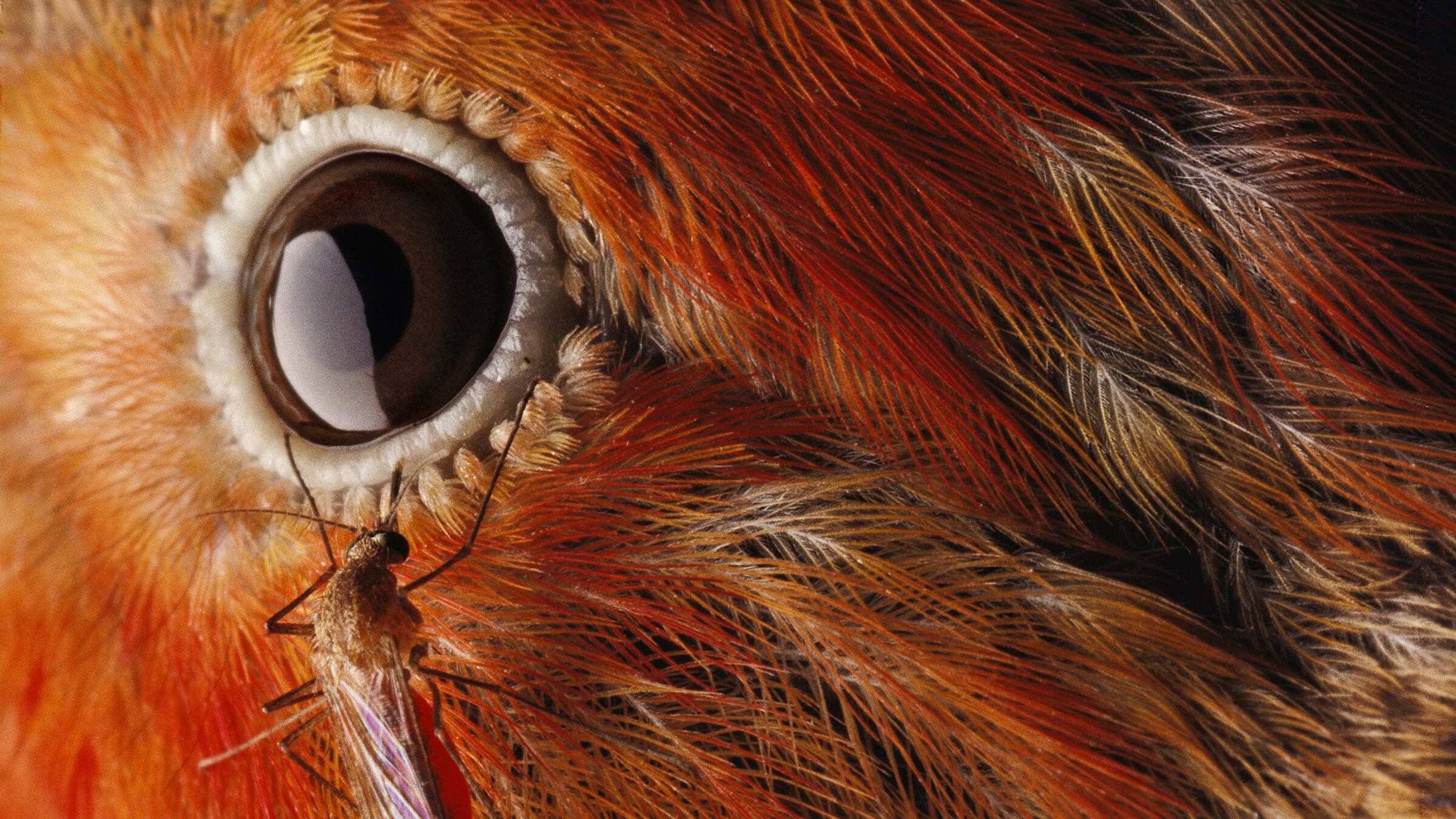 A Culex mosquito steals up the face of an 'I'iwi, a Hawaiian Honeycreeper. The invasive insect poses significant danger to the native bird because it's a vector for avian malaria—a disease that, combined with climate change, is killing off the brilliant red 'I'iwi. Photo: Chris Johns/National Geographic Creative

6 Horrifying Bird Plagues—and How to Stop Them

These tiny scourges can cause mass casualties among avians. 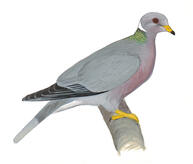 Birds get sick. Just like us, they are prone to diseases and parasites, from pathogens that lurk in their blood to insects that feed on it. In some cases, these organisms and their hosts exist in relative harmony, particularly those that co-evolved over millennia. But when birds are hit with an entirely new-to-them bug—often a nonnative species, or the result of one—their immune systems aren’t always prepared for the attack.

New illnesses are especially dangerous for birds already fighting for survival, such as endangered species or populations facing the potentially negative effects of climate change. From there it’s a race against time for birds to adapt, perhaps by evolving a new immune response that helps ward off the illness or by adopting a behavior that helps them avoid infection to begin with. In the meantime, conservationists can help by coming up with ways to keep birds bug-free.

Here are six avian plagues and what they could mean for birds in the future.

A Nightmare on Oahu

Alien arrival: The mosquito Culex quinquefasciatus may have first arrived in the Hawaiian Islands in 1826, aboard European and American ships. Unfortunately for native birds, the skeeters harbored another stowaway: avian malaria, or Plasmodium relictum, an infectious protozoan.

Mode of attack: Avian malaria needs both the mosquito and its avian host to complete its lifecycle; in birds, it reproduces in the red blood cells, causing anemia, an enlarged spleen and liver, and eventually death.

Status: Today avian malaria is found on all of Hawaii’s major islands, where it has helped decimate honeycreepers like the vulnerable Iiwi. Birds that dwell on mountaintops at 4,900 feet or higher fare better, as both the mosquito and the parasite struggle at cooler, higher altitudes. Still, as climate change pushes temperatures up those mountains, the birds could have nowhere to hide.

Remedy: One approach is to curb invasive feral pig numbers, says Dennis LaPointe, a research ecologist with the U.S. Geological Survey’s Pacific Island Ecosystems Research Center. Mosquito larvae grow in fresh water, including muddy pig wallows and the holes swine leave behind after uprooting and scarfing down Hawaiian tree ferns. But perhaps most promising is the potential to boost birds’ immunity. Some species, including another honeycreeper, the Amakihi, are proving resistant to malaria, says Robert Fleischer, a conservation geneticist at the Smithsonian Institution. His group is working to identify the genes that provide protection, which would allow captive-breeding programs to introduce that resistance into species susceptible to avian malaria.

Alien arrival: When the fly Philornis downsi first landed in Galápagos finch nests in the 1990s, to the birds it was as if the insect had “arrived from the planet Mars,” says Dale Clayton, a University of Utah parasitologist. The fly may have hitched a ride in produce shipments.

Mode of attack: Adult flies, which eat rotting vegetation, lay eggs in bird nests. The larvae hatch and emerge only at night to chew through birds’ skin to devour blood and other fluids.

Status: The fly is on 11 of the 13 major islands. It targets brooding mothers and nestlings, but the young are especially vulnerable, facing mortality rates up to 95 percent in some places. The Mangrove Finch's fate is particularly dire—only 80 birds remain. And Clayton’s group's new model found that a worst-case climate scenario could drive local finch extinctions in the next 50 years.

Remedy: Pheromone traps, introducing tiny wasps that parasitize the flies (but leave native bugs alone), and other measures are in the works, says Birgit Fessl of the Charles Darwin Foundation. And in 2014 Sarah Knutie, then at the University of Utah, figured out how to get finches to self-fumigate: Put out cotton balls soaked with a mild insecticide, and birds will collect the fluff for nests, killing off the flies.

Alien arrival: West Nile virus first landed in New York in 1999 and swept across the country, reaching the Pacific Coast by 2002. Along the way, it may have infected more than 225 bird species, including the Greater Sage-Grouse in the interior West.

Mode of attack: The virus is spread by Culex mosquitoes and circulates mainly in birds. Transmission depends strongly on temperature: The hotter it is, the faster the virus spreads.

Status: West Nile killed local sage-grouse populations at a rate of between 2.5 percent and 29 percent between 2003 and 2005. The majority of sage-grouse, however, weren’t exposed to the virus, leaving those birds susceptible during the next outbreak, researchers concluded. Many populations are currently protected by cool climates at high altitudes, but these birds may face more infection as climate change expands the virus’s range, says Sarah Konrad, a spatial analysis expert at the University of Wyoming. How quickly that might happen is uncertain, she says, but “we can say hard and fast that temperatures are warming globally, which is going to cause an increase in the transmissivity of mosquito-spread viruses.”

Remedy: To stop the spread, researchers suggest treating water where the mosquitoes breed—such as artificial waterways and ponds, particularly those related to energy infrastructure in the West—with pesticides, or draining them entirely. Scientists at Ontario’s University of Waterloo are experimenting with another option: seeding the water sources with fathead minnows, which eat the mosquito larvae.

Alien arrival: When European settlers first came to North America, the predominant theory goes, they brought pigeons and doves. Those birds in turn brought Trichomonas gallinae, an infectious single-celled protozoan. Eventually, the parasite made its way to California and infected the Band-tailed Pigeon—the state’s only native pigeon.

Mode of attack: The parasite passes between birds at feeders or watering holes, when they touch beaks during courtship, or when parents feed offspring. Birds infected with the most virulent strain form cheese-like sores in their mouths and throats that make it difficult to swallow, eventually causing starvation.

Status: In 2014, after Band-tailed Pigeons had experienced decades of decline for a variety of reasons, as many as 30,000 individuals died from trichomonas. The reason for the mass mortality is uncertain, but “drought conditions may be reducing the number of areas of water that are available to birds,” says Yvette Girard, an infectious disease epidemiologist. More birds at fewer water sources may have made it easier for the parasite to spread.

Remedy: Bird lovers can help by washing feeders and platforms with a 10 percent bleach solution. And it's crucial for wildlife managers to monitor the slow-reproducing Band-tailed Pigeon, says Krysta Rogers, a California Department of Fish and Wildlife scientist. That way, if numbers dip, officials can reduce bag limits for the pigeon, an important game bird.

Alien arrival: Avian flu made headlines in recent years as virus strains jumped from birds, often domestic chickens, to humans. But the virus is ancient, having circulated in wild birds for an estimated 8,000 years. It has traveled the world ever since, constantly changing form.

Mode of attack: Benign versions are common in wild birds and don’t usually cause illness, says Hon Ip, the director of the Diagnostic Virology Laboratory in the USGS National Wildlife Health Center. But when flus infect domestic poultry, he says, they “can evolve into highly pathogenic strains as they are passed from bird to bird, becoming ever more virulent in the process.”

Status: In late 2014 a nasty strain called H5N8 came to the United States from Asia; by June, 49.5 million chickens and turkeys across the Midwest had been killed, mostly from culling to prevent the virus’s spread. Wild birds are also at risk. A Canada Goose in Oregon was infected with H5N8, and geese in Kansas, Wyoming, and Michigan contracted the related H5N2 virus, which can cause severely twisted necks, tremors, and an inability to fly or swim. Ip’s team has also found the virus in seven species of falcon, eagle, and owl.

Remedy: It’s difficult to protect wild birds from the flu. Tracking and predicting outbreaks before they hit particularly vulnerable populations may deliver the most bang for the conservation buck, says A. Townsend Peterson, a disease ecologist at the University of Kansas. The virus isn’t likely to push common birds to extinction, he says, but if an outbreak hits in tandem with habitat loss and other pressures, “you could see one of these pathogens contributing to making a bad thing worse.”

Mode of attack: Many species of fluke depend on both faucet snails and birds to live and reproduce. One, Leyogonimus polyoon, requires faucet snails, insects, and gallinules such as the American Coot to survive. In lakes and other freshwater systems, snails eat fluke eggs, which then hatch thousands of larvae. When waterfowl eat infected snails, flukes end up in their digestive tract, where they gorge on blood through the intestinal lining and cause ulcers, hemorrhaging, and death. Flukes lay eggs in birds, too, which make their way back into the environment to start the cycle anew.

Status: By 2002 faucet snails had moved south through Wisconsin waterways to Lake Onalaska, a backwater of the Upper Mississippi and a key migratory stopover. They've been infecting birds with flukes ever since. In spring 2006, for example, flukes killed up to 26,000 waterfowl, especially Lesser Scaup and American Coots, federal wildlife agencies reported. Researchers now expect regular die-offs, says Rebecca Cole, a parasitologist with the USGS National Wildlife Health Center. “Every spring and fall, we plan on a surge of carcasses along the Mississippi.”

Remedy: Conservation is tricky: The snails have built-in “trapdoors” that block poisons and other treatments. The best bet for now may be to strengthen avian populations by conserving habitat and food sources.