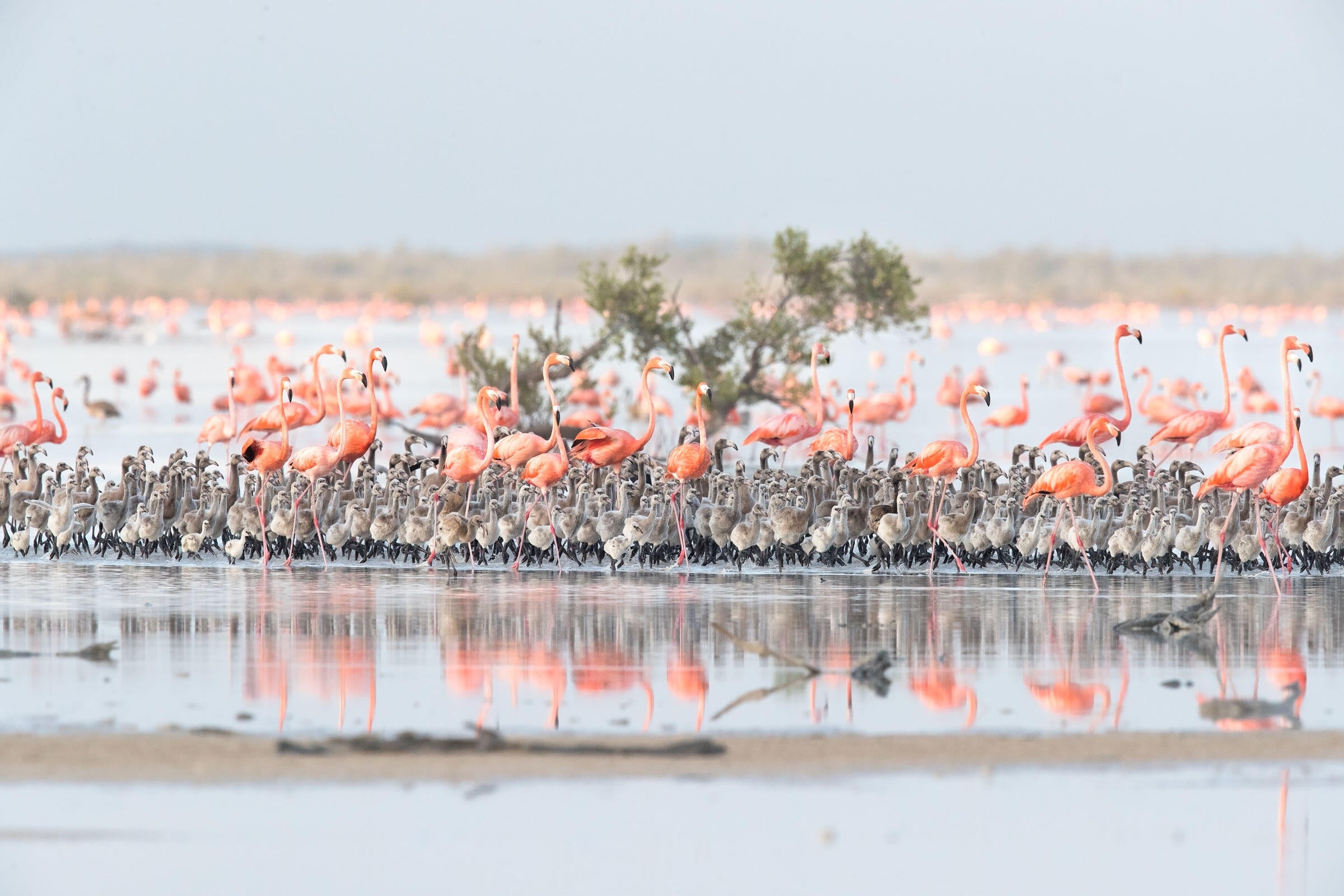 The Bahamas Are Filled With Flamingos Once Again

On the island of Great Inagua, the flashy birds have made a huge comeback.

By Tom Clynes/Photography by Melissa Groo

By Tom Clynes/Photography by Melissa Groo

One of the Caribbean’s greatest conservation success stories began in the early 1950s, when ornithologist Robert Porter Allen, Audubon’s first director of research, arrived in the Bahamas’ southernmost islands to discover only a scant hundred or so flamingos—one of the last breeding colonies of American Flamingo. Thanks to the efforts of Allen and others, the Bahamian government preserved roughly half of Great Inagua as a national park, and the island’s flamingo population now tops 80,000—outnumbering human residents by more than 80 to 1.

Walk This Way (above)

In the shallow, salty waters of Lake Rosa in Inagua National Park, adult flamingos herd chicks into groups called crèches. Just a few babysitting adults supervise each crèche while other parents forage, returning periodically to feed their own young, which they recognize by vocal patterns and appearance. 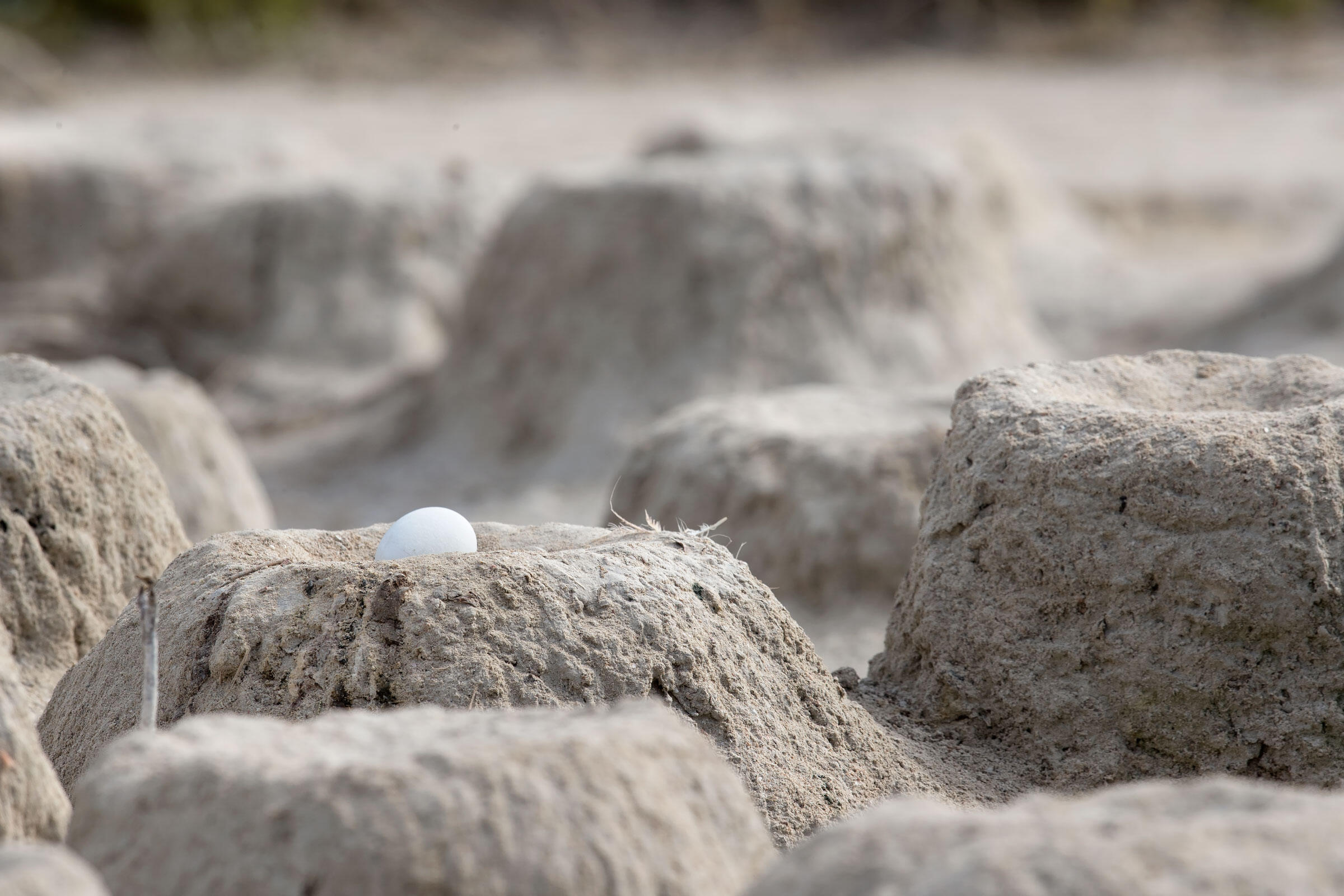 A lone flamingo egg sits abandoned on its raised nest mound. Flamingos lay only a single egg each year; if it is lost or damaged, they do not typically lay a replacement. Both the male and female gather mud with their beaks, then shape the nest with their feet. Flamingos are social birds; they often build nests close together, creating flamingo neighborhoods. 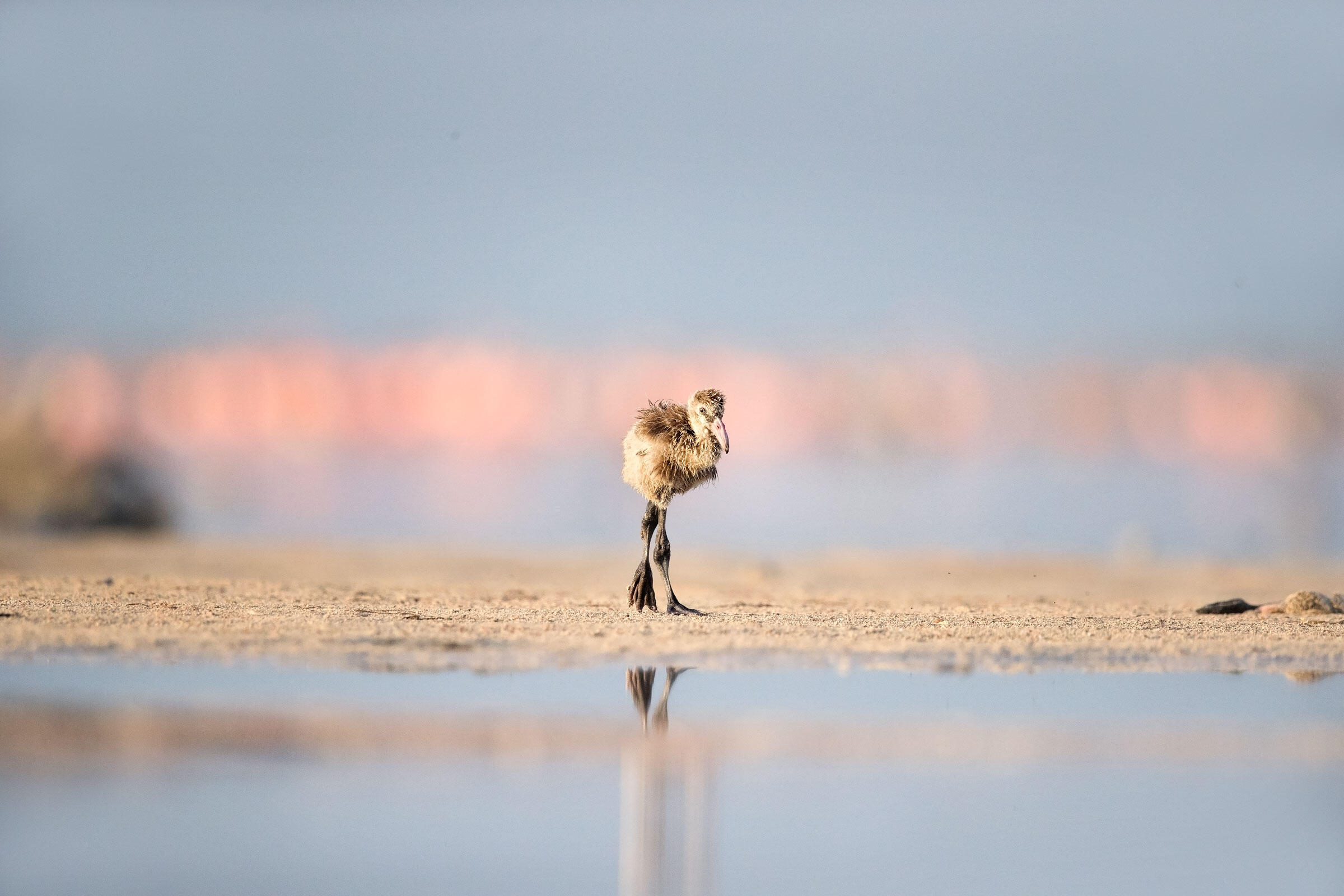 Revealing an oversized webbed foot, a lone chick explores a strip of land in the center of Lake Rosa. Chicks can walk and swim adeptly by the time they leave their nests, but those that stray from the crèche are vulnerable to predators. 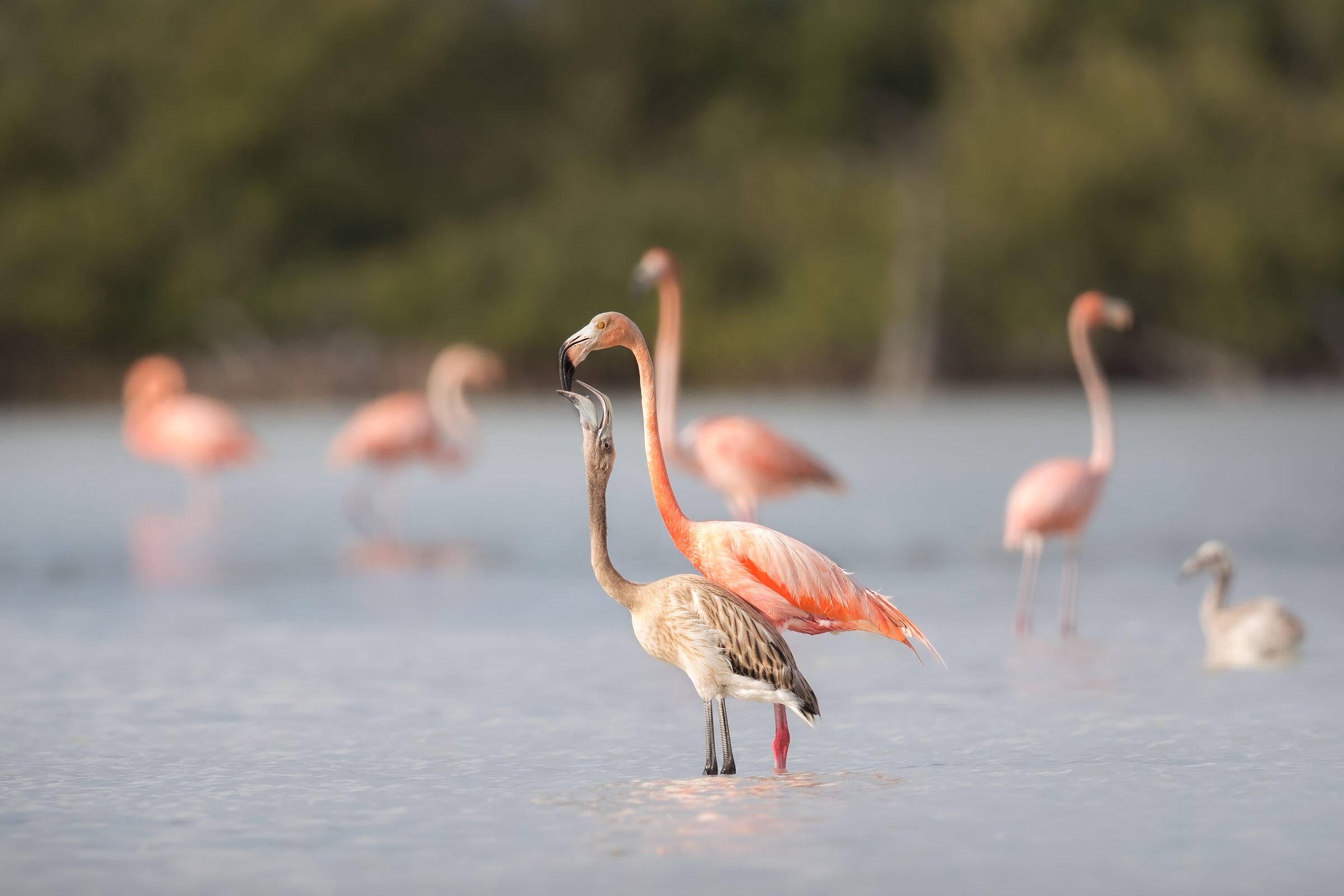 Adults feed their chicks a secretion of the upper digestive tract referred to as “milk,” much like doves and pigeons. The secretion is caused by the hormone prolactin, which both male and female flamingos produce. 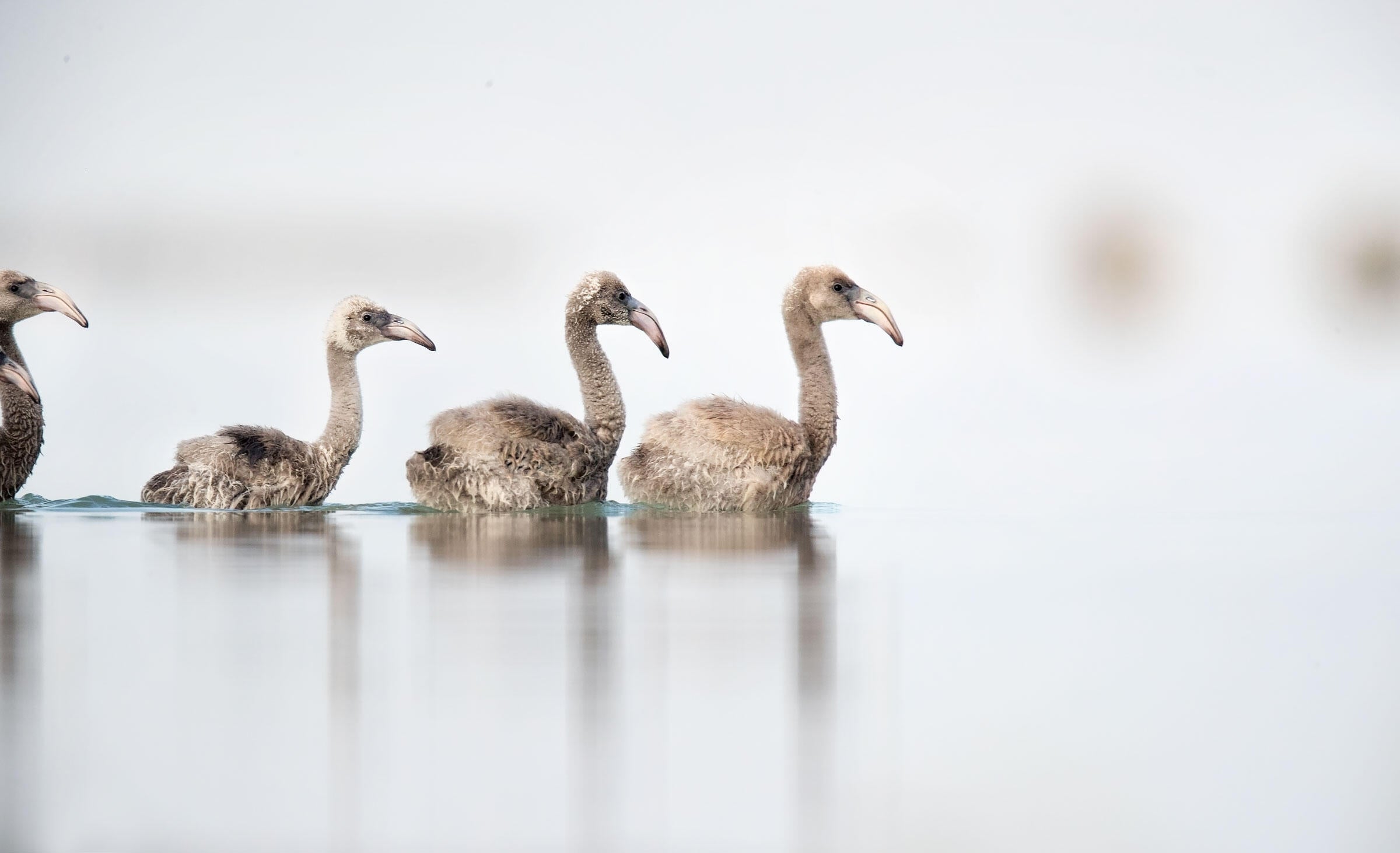 Chicks must be fed by adults for about three months, until their short, straight bills gradually lengthen and curve downward enough for them to begin picking up food on their own. Once a chick can forage, it is effectively weaned, and the parents no longer provide for it. 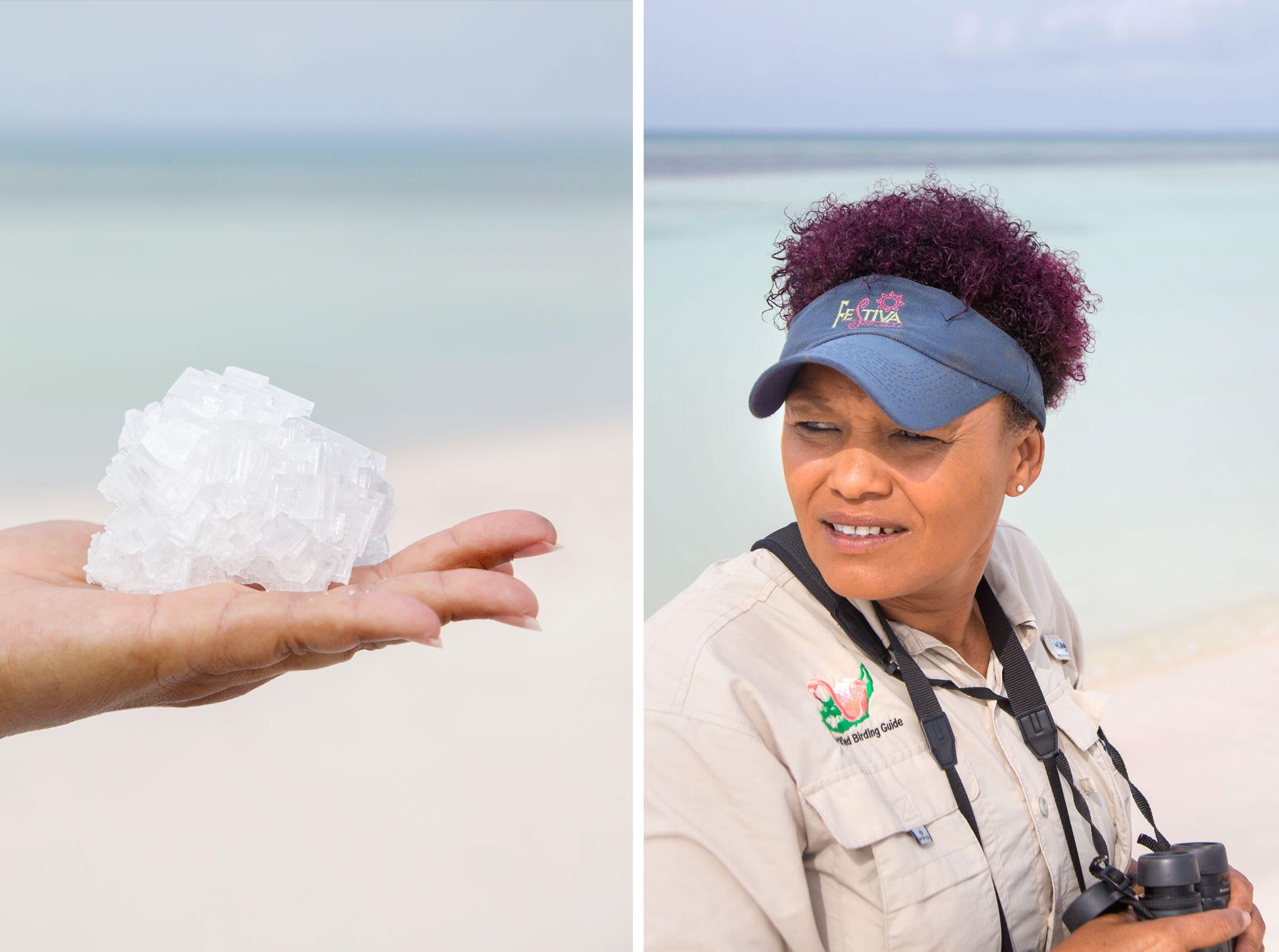 Morton Salt is Inagua's biggest employer. Audubon helps train guides for a bird-based ecotourism program on Great Inagua that aims to diversify islanders’ income. Tarra Lindo now earns part of her living by showing visitors Inagua’s flamingos and other birds. “Our ancestors were in the business of hunting the flamingos,” Lindo says. “Now our generation is in the business of protecting them.” 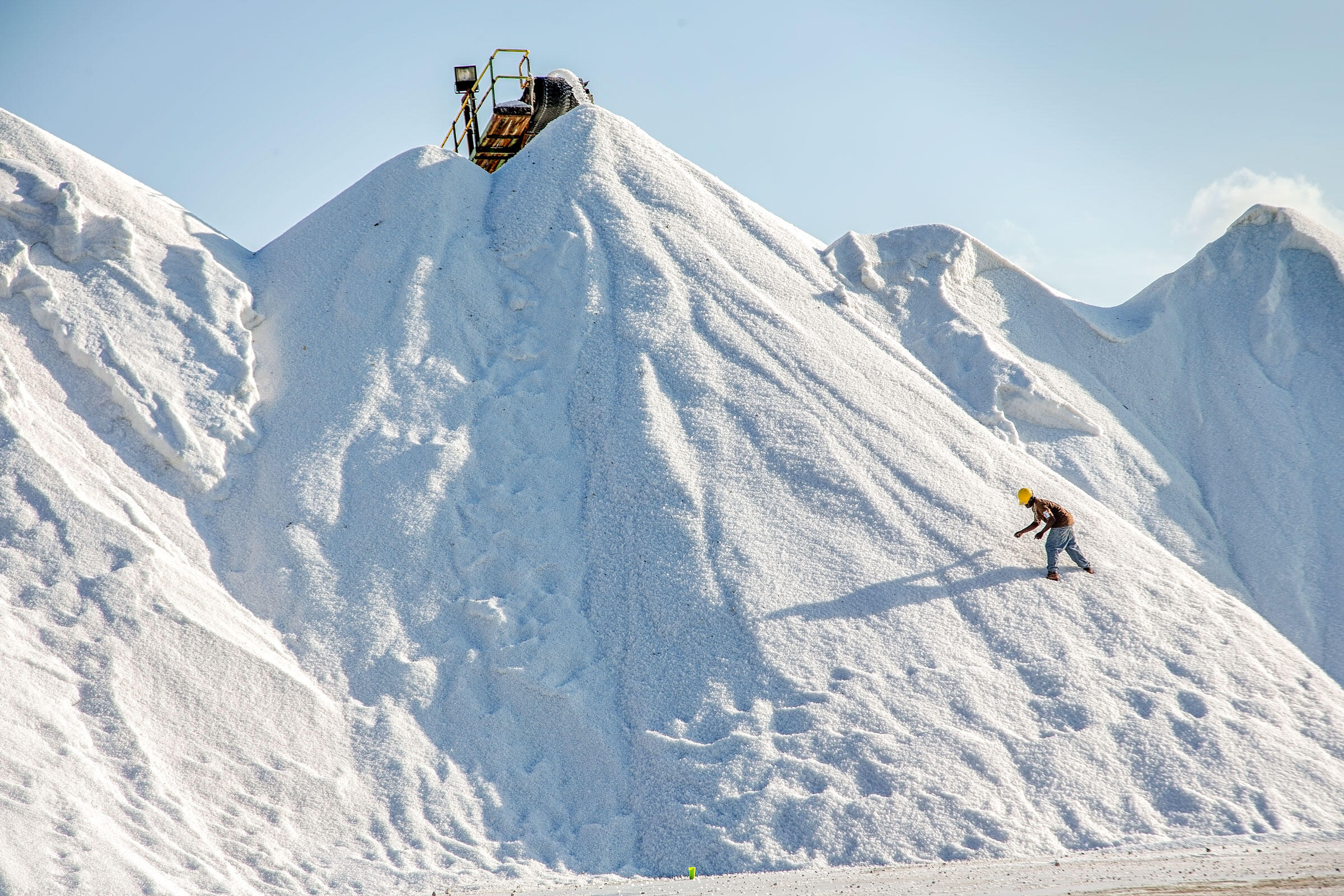 A Morton Salt Company employee picks impurities from a hill of salt drawn out of ocean water through natural evaporation. Though development and habitat loss threaten flamingos in much of their range, Morton’s salt-concentrating ponds provide valuable shallow-water habitat for Inaguas’ birds. 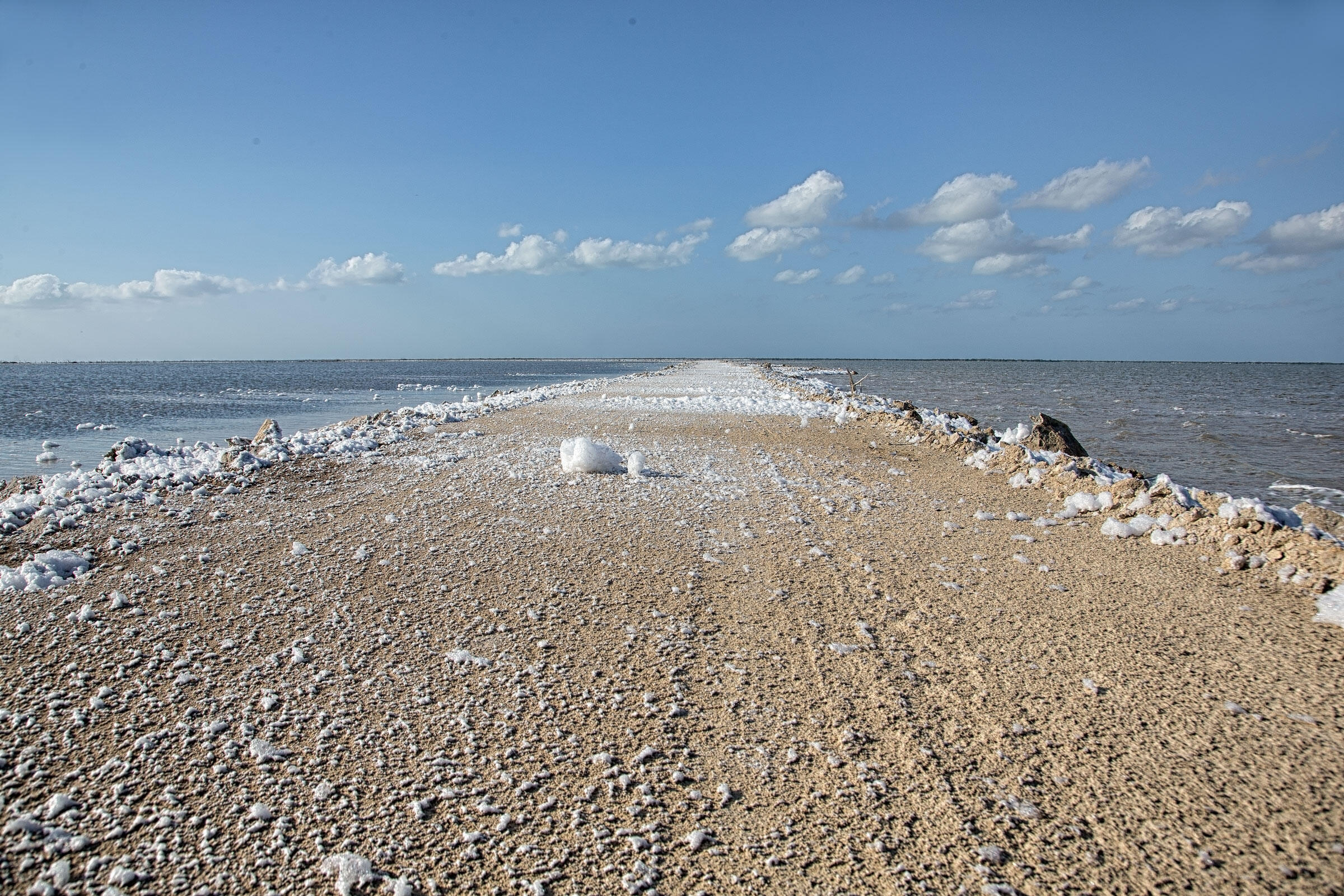 Salty foam, which forms on water when organic matter churns up, blows across a road that runs between Morton’s ponds. Brine shrimp eat algae that grows at the bottom of the ponds, and the flamingos eat the brine shrimp, which helps the process of concentrating salt—creating a symbiotic relationship. 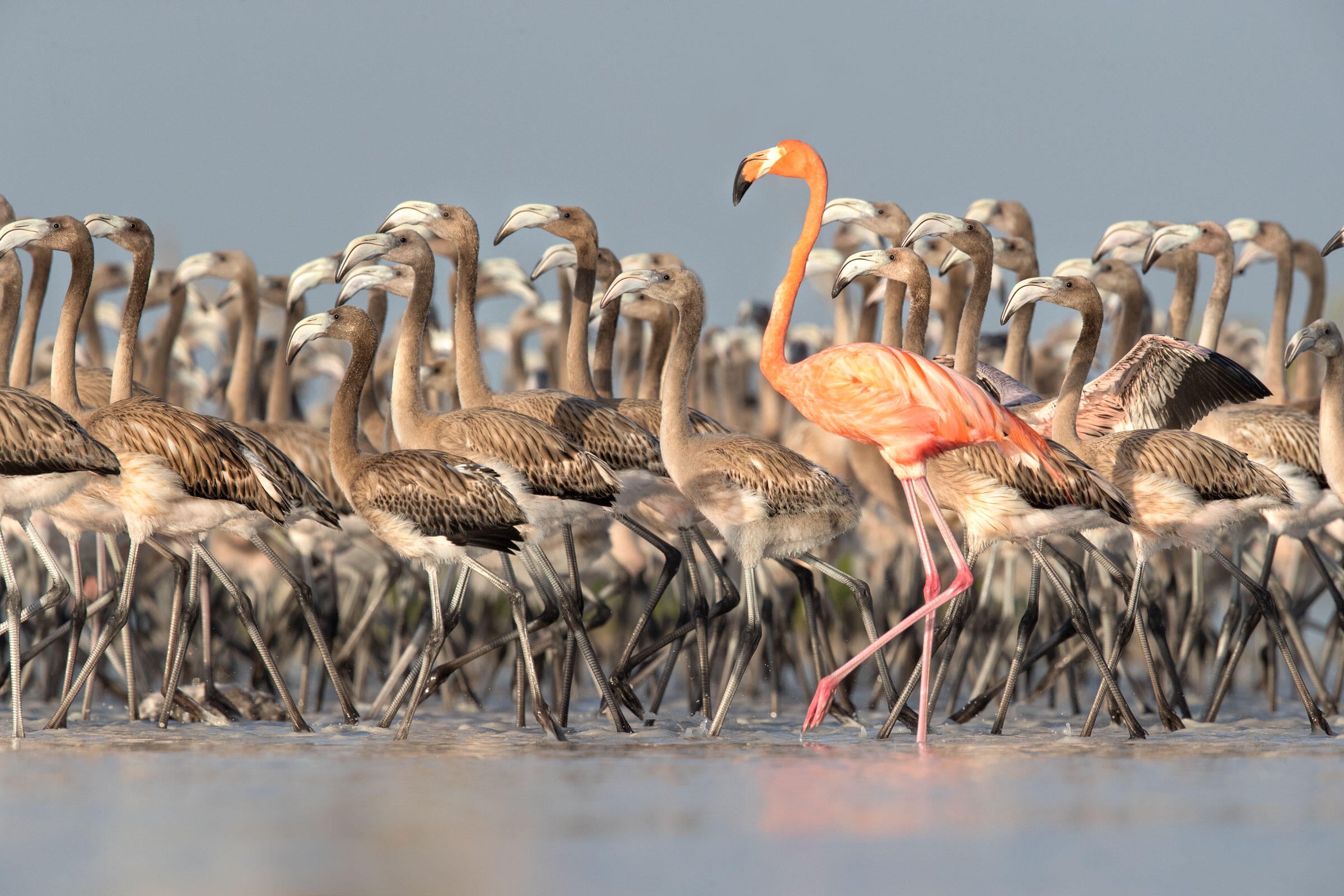 Born a drab gray or white, the flashy waders derive their brilliant mature plumage from red-orange pigments found in their diet of crustaceans, larvae, and algae. 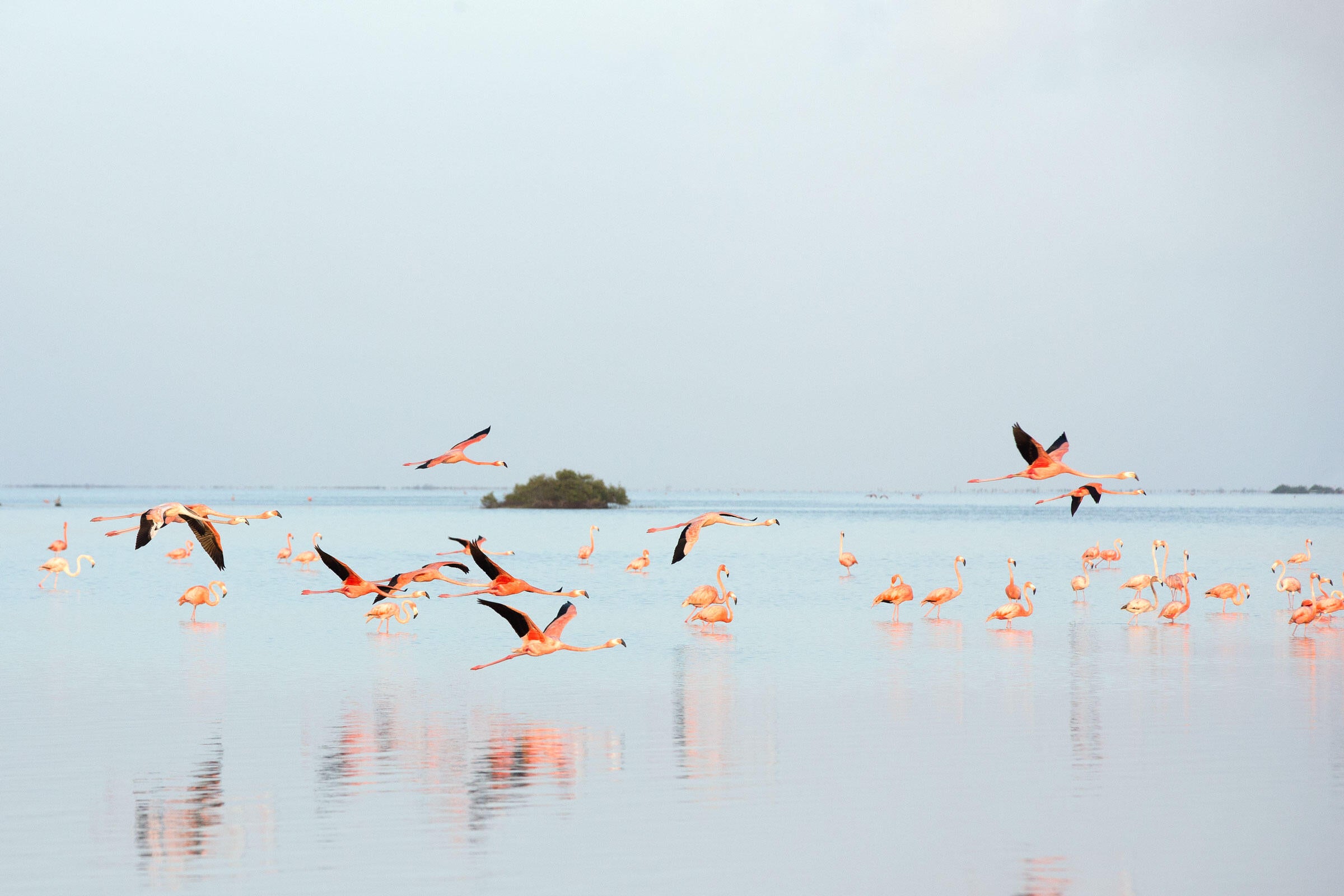 In early morning flamingos launch themselves from the colony to feed, revealing black outer and central wing feathers.

This story originally ran in the Spring 2018 issue as “High and Mighty.” To recieve Audubon magazine in print, become a member by making a donation today.

The Busy Life of Bob the Flamingo

Once badly injured, the recovered bird now teaches residents of Curaçao about the importance of conservation.