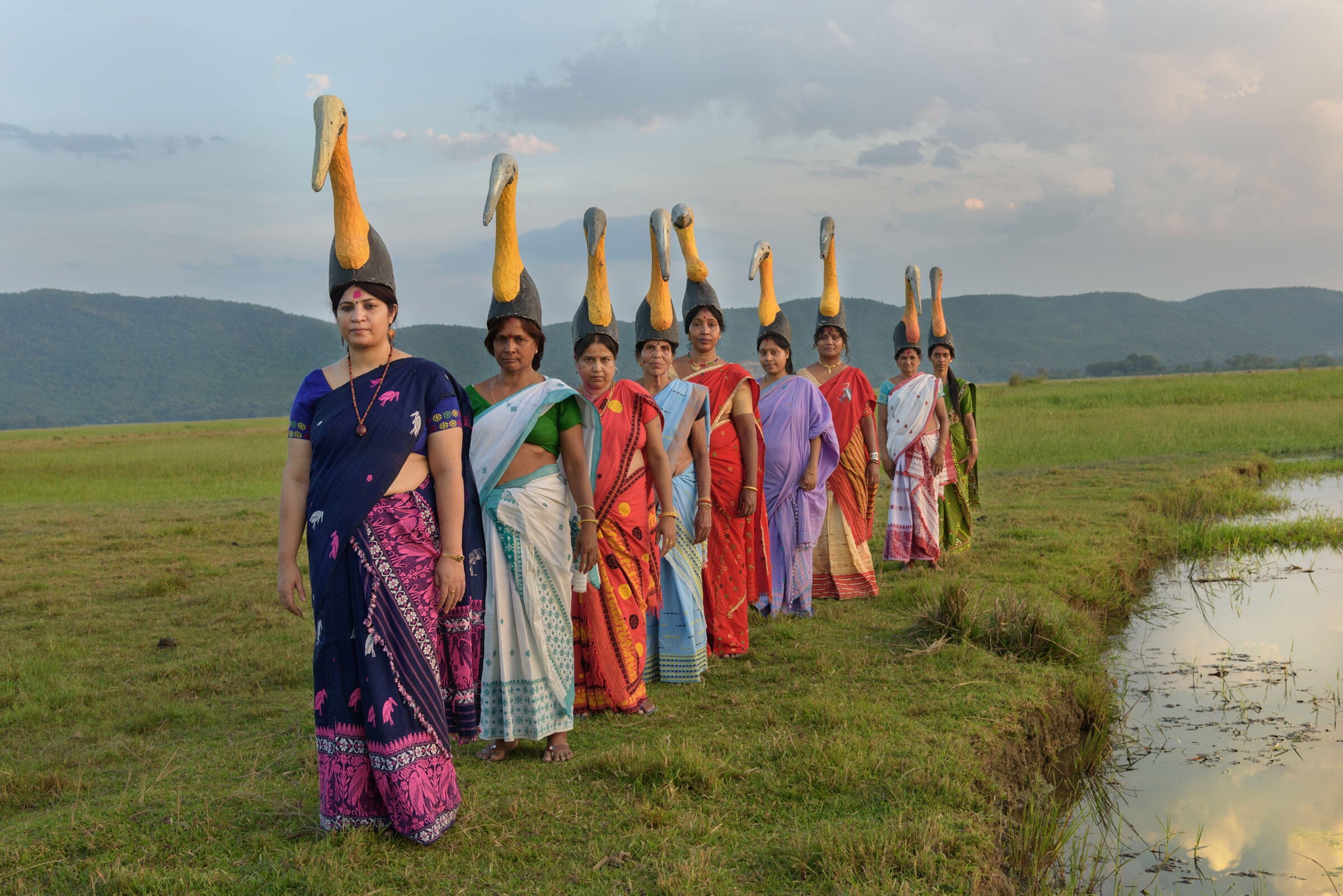 Women in India have banded together to build empathy for the Greater Adjutant Stork—starting by celebrating the bird's nesting season.

Around the village of Pachariya in India’s northeastern province of Assam, hibiscus flowers bloom into fuchsia whorls and paddy fields pop green from recent monsoon rains. Inside the community prayer hall, wafting incense blends with the scent of sliced fruit. Two dozen women laugh and talk as they prepare food for a baby shower. It’s a celebration rooted in tradition, but for the nature of the new arrivals. The women are celebrating the baby birds anticipated in a new nesting season of the Greater Adjutant Stork.

Known locally as hargila, or bone swallower, the leggy five-foot bird once evoked much harsher treatment. When Purnima Devi Barman first visited these villages in 2008, as a university student researching the world’s largest colony of the species, she witnessed their maltreatment firsthand. One day a villager pointed her to a freshly felled tree, which had been chopped down with no regard for the nine nests in its branches. Young storks—some hatchlings, some as large as chickens—had fallen to their deaths.

Barman knew that the endangered storks, once widespread across South and Southeast Asia, were often poached or poisoned, displaced or killed when landowners razed trees for lumber. Named for their habit of picking carcasses, the raucous birds also feed at garbage dumps, and a fall-out zone of droppings forms on the ground below their nests. Barman tried explaining the birds’ plight to the tree feller standing by with his axe. But he ridiculed her for standing up for a bird he considered a pest, and his friends joined in. “I was very naïve,” Barman says. That night she lost sleep. “This was the event that changed everything,” she recalls.

The birds, Barman realized, would require an image makeover in order to survive persecution. Bald-headed and with loose skin sagging from their necks, the storks are sometimes viewed as evil omens and suspected of spreading disease. She placed her graduate studies on hold and sought ways to change villagers’ attitudes. An Assamese mother herself, Barman was struck by inspiration while attending a baby shower. “Women are very influential,” she says. “If we build the support of the women, then we can raise the support of the men.”

Walking house to house, she befriended women in Dadara, Pachariya, and Singimari, the three villages surrounded by this globally important cluster of nesting storks. She spoke admiringly of the birds, and as the 2009 nesting season approached, she invited the women to her first stork baby shower. “At first, when we started, we had just a few women,” Barman says. The celebration in Assam in October hosted some 400 guests.

Mamoni Malakar attended her first shower in 2014. Back then, she says, "I had no awareness about the hargila and the fact that it was an endangered species.” She attended cooking and biodiversity classes Barman organized to build empathy between human and stork, and learned to see the storks in a new light. By eating dead animals they clean the environment and actually slow disease spread, she learned, and they also control pests like rats and snakes. In Hindu mythology the god Vishnu rode on the back of Garuda, a legendary bird thought to be an adjutant stork. The understanding that the birds were beneficial, sacred, and rare spread in the village. Even kids recruited supporters: Students told their moms about hargila lessons at school, prompting more women to get involved.

Barman was a child herself when she developed a fondness for birds. When she turned six, her parents left home for seven years to travel for her father’s job with the army, placing Barman in her grandmother’s care. With no telephone, no internet, and only occasional letters from her parents, the young Barman was often distressed. Her grandmother consoled her by refocusing her attention on nature—flooded paddy fields and wading storks—whenever she was crying or feeling sad. “I feel like her soul is in me,” Barman says.

Years later, as an undergraduate student at Guwahati University in Assam, Barman was drawn to the study of ecology, conservation, and biodiversity in a region where “everyone was working on rhinos and tigers,” she says. The hargila was overlooked, Barman realized. She committed to studying the species.

Even beyond her work in the villages amid the stork colony, Barman derives strength from connections with other women. She’s a member of the global conservation group Women in Nature Network (WiNN) and is mentored by one of its founding members Leeanne Alonso, a senior associate at Global Wildlife Conservation in Austin, Texas. Alonso visited the stork colony in Assam when Barman hosted WiNN’s 2019 meeting in Guwahati. It’s clear Barman brims with ideas, Alonso says. “She’s so caring about not only these birds but also the community that she works with.”

Barman’s efforts have benefited villagers as well, empowering women in a region with few jobs for them.

Jessica Deichman, a scientist at the Smithsonian Conservation Biology Institute in Washington, D.C., describes Barman as a persistent organizer and passionate scientist. The two women met through WiNN, and in 2019 Deichmann saw Barman’s work in Guwahati firsthand. She was struck by the intimate quarters shared by storks and humans. “In the backyards are these trees with giant storks in them. It really is urban wildlife,” she says. So finding a balance between the needs of people and birds is, she says, “absolutely essential for their survival.”

Ten years after Barman first encountered the fallen storks, it’s now rare for locals to harvest trees where storks are nesting, and the local stork population has increased from 400 to 950—significant growth for a long-lived species with a global population that’s estimated at fewer than 1,200 adults. Barman, who now works for the Guwahati-based research and conservation nonprofit Aaranyak, hopes that construction of artificial nesting platforms, made possible with new funding, will further boost their numbers.

Barman’s efforts have benefited villagers as well, empowering women in a region with few jobs for them. Inspired shower attendees began weaving artisanal fabrics featuring stork motifs, which are sold locally and made into mekhela chadar, traditional Assamese dresses; the looms are financed by grants. “Because of Purnima Barman, we are now generating income,” says Rebati Baishya, who attended the October shower.

The opportunity to help the storks is the fulfillment of Barman’s childhood dream, when she found comfort in admiring hargila wading in paddy fields. To others, they might appear scruffy and strange. But for Barman and hundreds of other Assamese women, the birds are worthy of the prayers, foods, and dances offered to Hindu deities on their behalf.

Correction, March 26, 2020: This article has been updated with accurate population counts for the stork colony. The original article reported that the colony grew from 750 to 800 birds over ten years, instead of 400 to 950 birds. Audubon regrets the error.