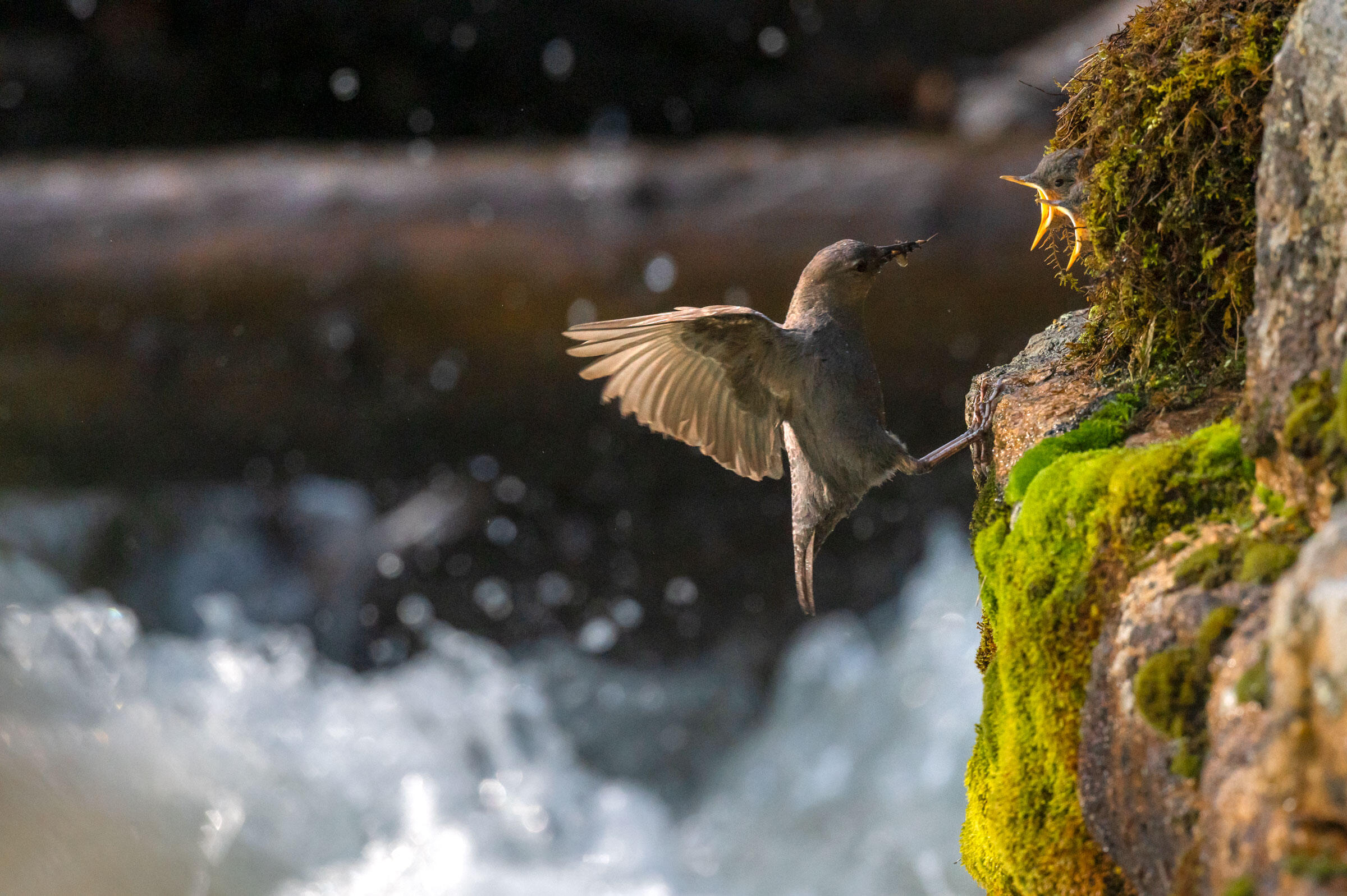 An American Dipper leaps from the rushing water below to feed its young in Rocky Mountain National Park. Photo: Michael Forsberg

A photographer spent years on rushing streams in the Rocky Mountains documenting the remarkable American Dipper.

The cold, fast-flowing streams of the West are home to the American Dipper, North America’s only truly aquatic songbird. Dippers first caught Michael Forsberg’s attention as a child, when his family would vacation in the Colorado mountains to escape the heat and humidity of Nebraska summers. The young angler occasionally spotted chunky little gray birds that bobbed up and down on rocks, dove into the water, and resurfaced with insects in their beaks. Now a professional photographer, Forsberg returned to the streams of his childhood over four years to document the dippers’ life cycle.

“I call them a trout with feathers because they eat the same things,” he says, “and they are remarkable underwater.” Through the project, Forsberg has gained a deep appreciation for the resilient birds and their role as sentinels of riparian health.

Dippers dive for their dinner or swim or walk along the riverbed in search of insect larvae, fish eggs, and fry. Adults start hunting early in the morning, delivering myriad meals to hungry chicks. Dippers build their nests on boulders, cliffs, or bridges adjacent to water, sometimes even behind waterfalls. The proximity is essential. 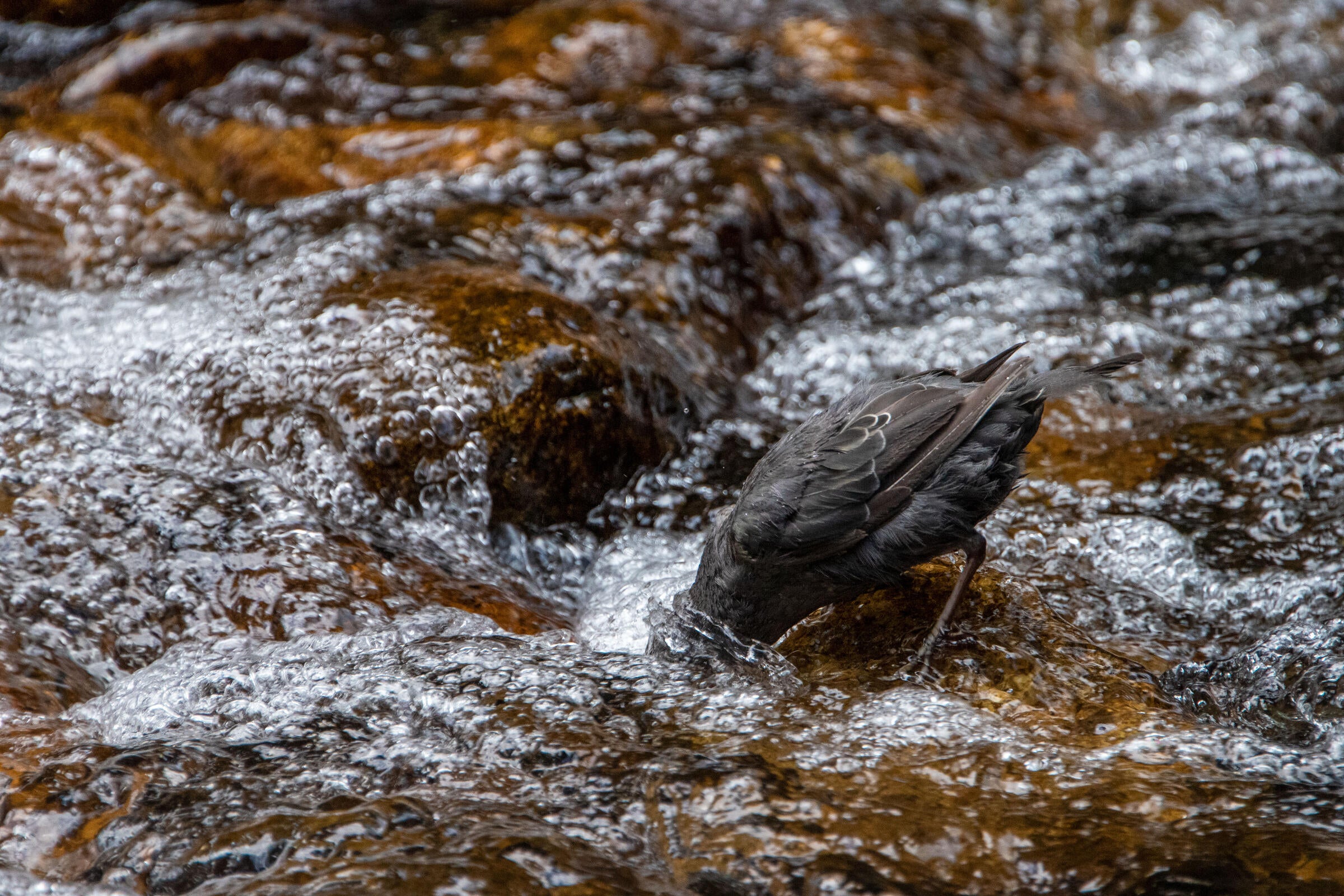 One day, from sunrise to sunset, Forsberg tallied the number of times the parents, which both feed chicks, returned with food; they made 220 trips, delivering a meal every four minutes on average. “If you think about what these parents have to negotiate to find that food, it’s mind-blowing,” he says.

Female dippers choose the nest site, though the male may help construct the structure itself. A pair work on the half-built nest above, located on a bridge piling above the Cache la Poudre River. An observer might not pick out the camouflaged nest or the drab female, but for the flash of her eyelids, which are covered with tiny white feathers. 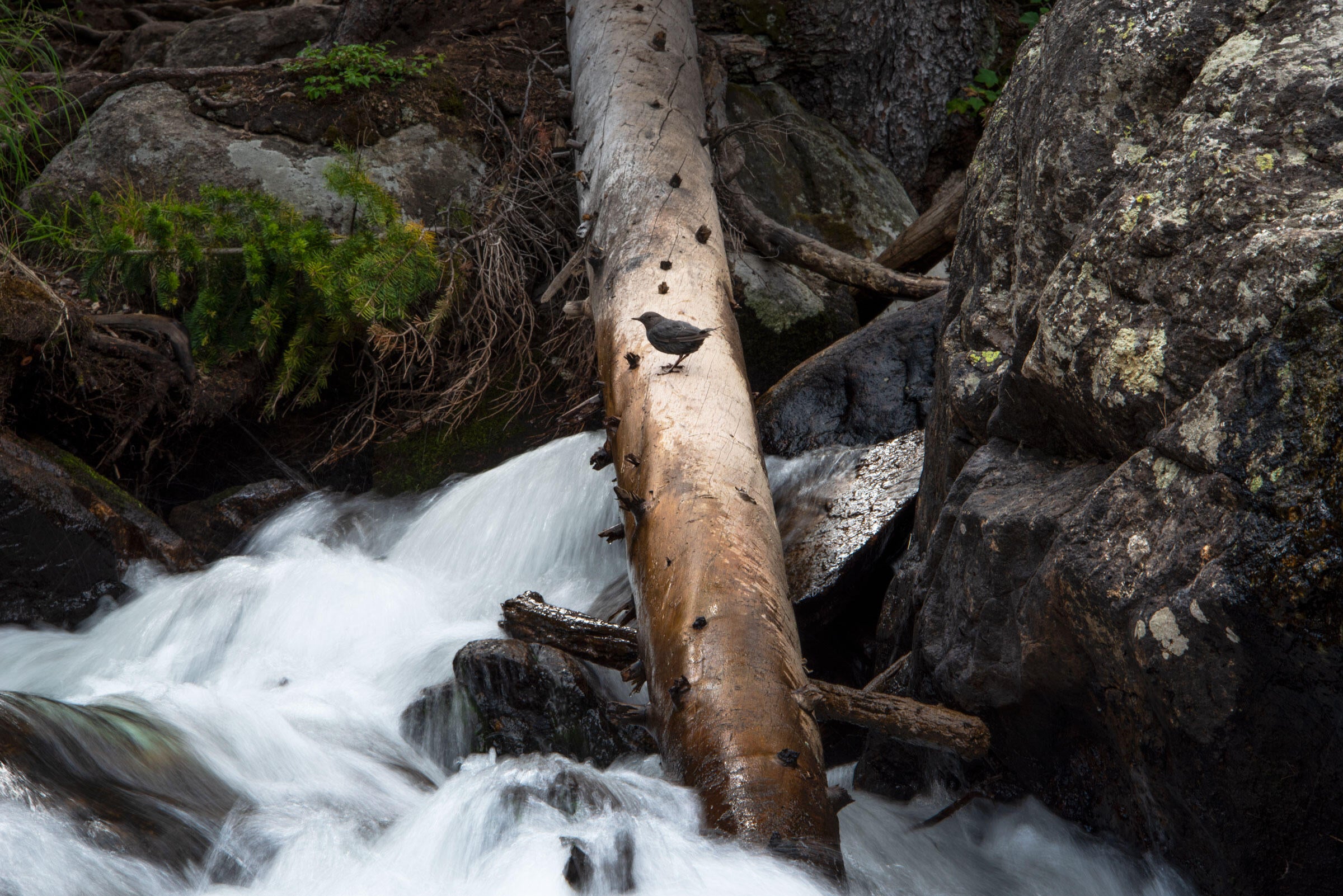 When foraging, American Dippers perch on boulders or fallen logs. The birds are named for the repetitive up-and-down bobbing motion they, and the world’s other four species of dippers, display.

American Dippers dip a lot—around 50 times per minute during courtship, feeding, and when they’re excited or disturbed. They don’t, however, dip while preening.

While perching, the birds will defecate. A splatter of whitewash on a midstream rock, captured above, clued in Forsberg that a dipper was nearby. 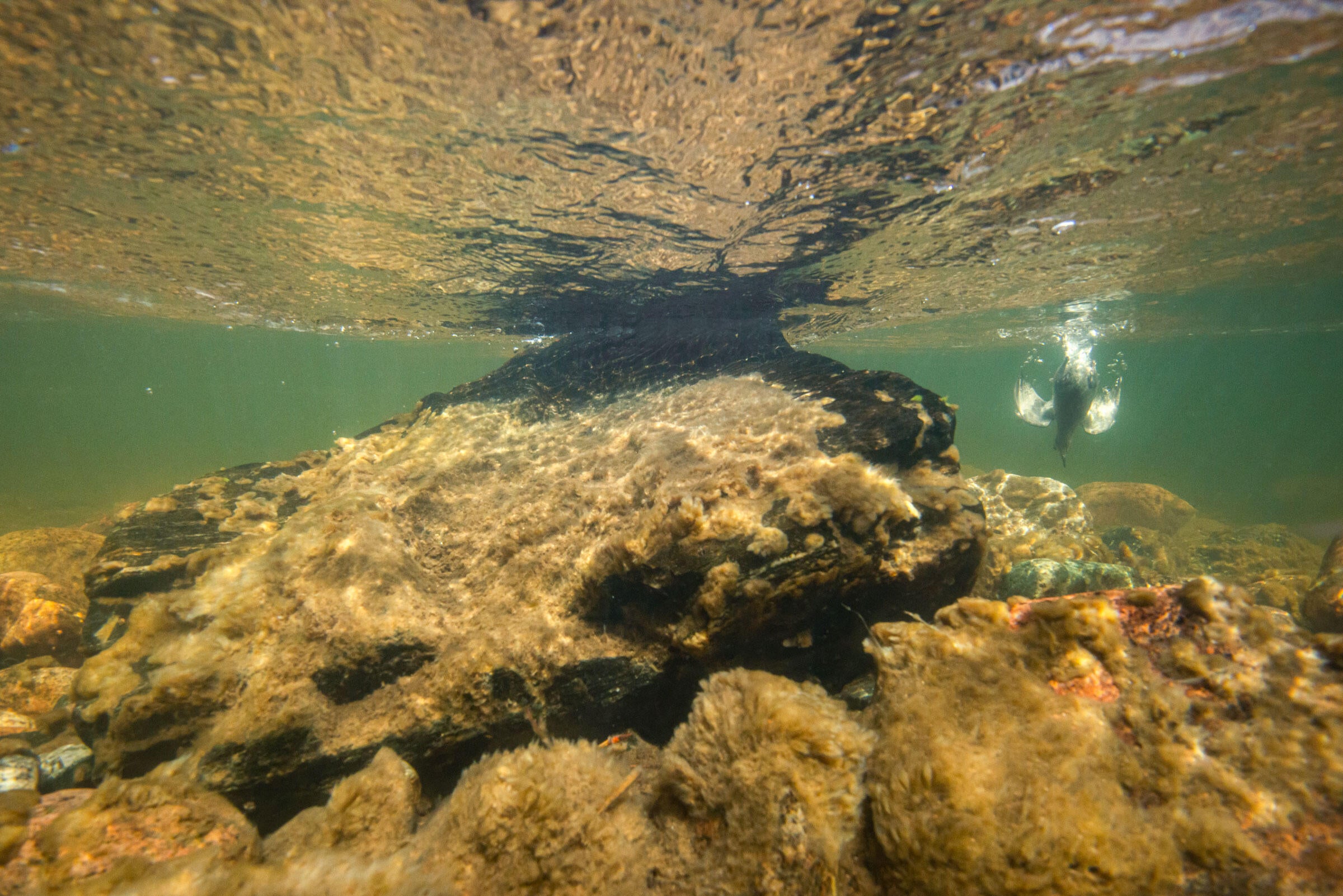 Dippers’ dense feathering and nostril flaps equip them to dive and swim in frigid waters. To capture underwater shots, Forsberg homed in on areas where the birds forage, then used a combination of continuously recording GoPro and remote-triggered cameras. It was a painstaking effort, and he estimates that only about one percent of his underwater shots were viable. 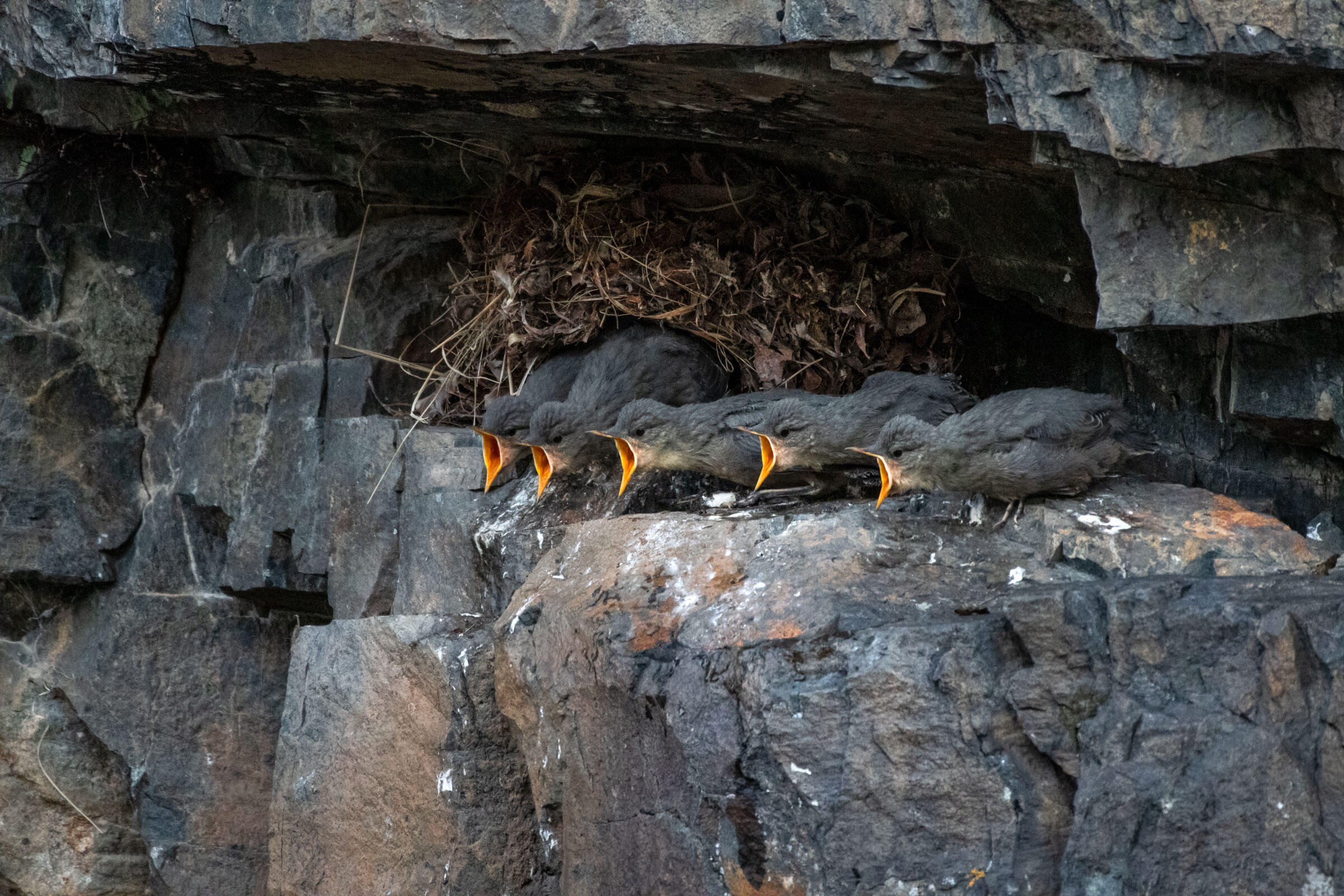 Though dippers might swim like a duck and have feathers like a duck, their enchanting melodies are indisputably those of a songbird. “Their song is absolutely beautiful; it’s so cheerful,” says Forsberg. “It just really brightens your world.” These three-week-old chicks aren’t singing yet, but their hungry cries cut through the roar of the river. 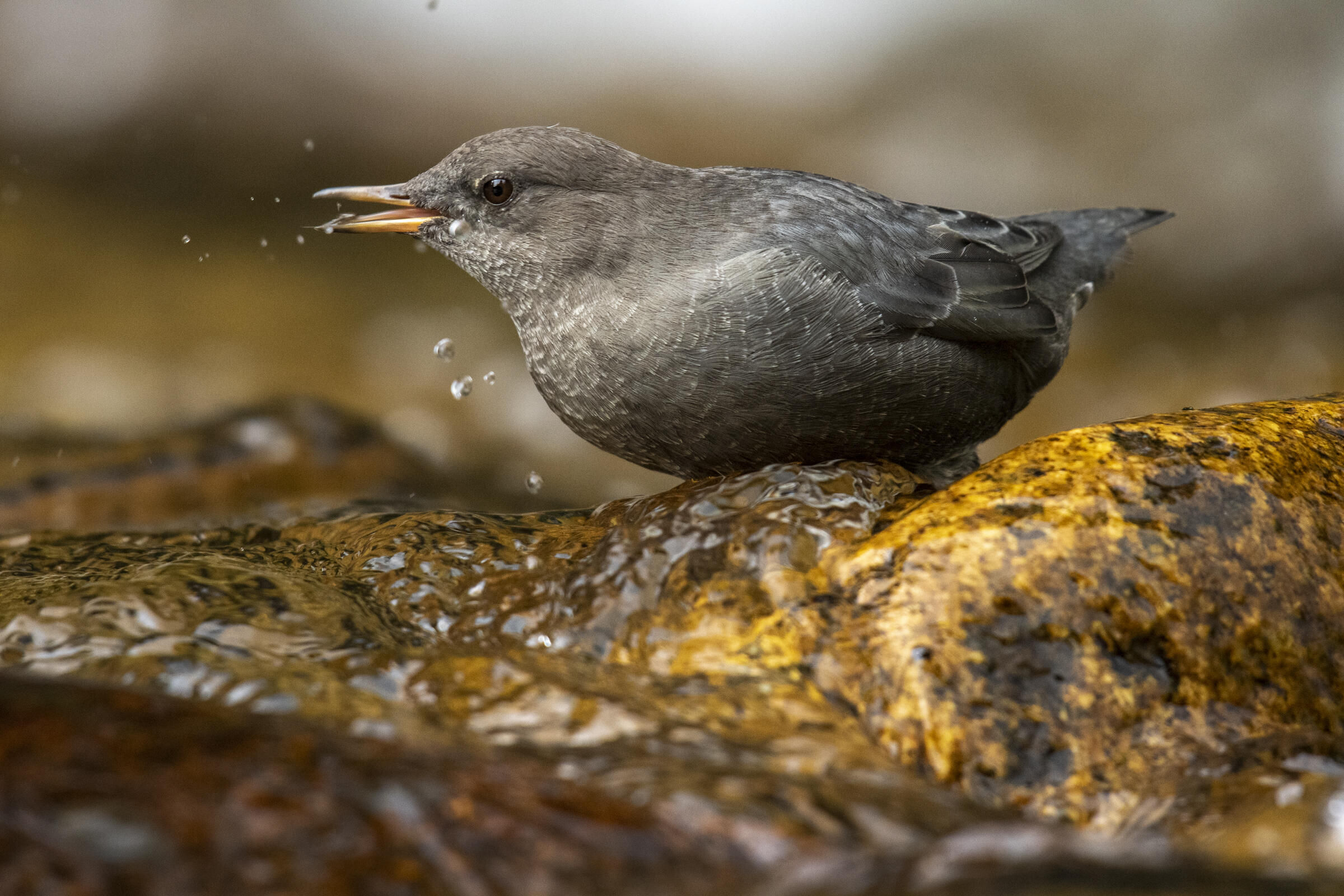 Chicks can run and dip by the time they’re 16 days old. Around 10 days later, they fledge. Juveniles, like this one, move downstream or to nearby other streams days or weeks after fledgling. While the young birds’ plumage retains a somewhat downy appearance, its parents will undergo a dramatic change in August, losing all of their flight feathers during their annual molt, rendering them flightless for up to two weeks. 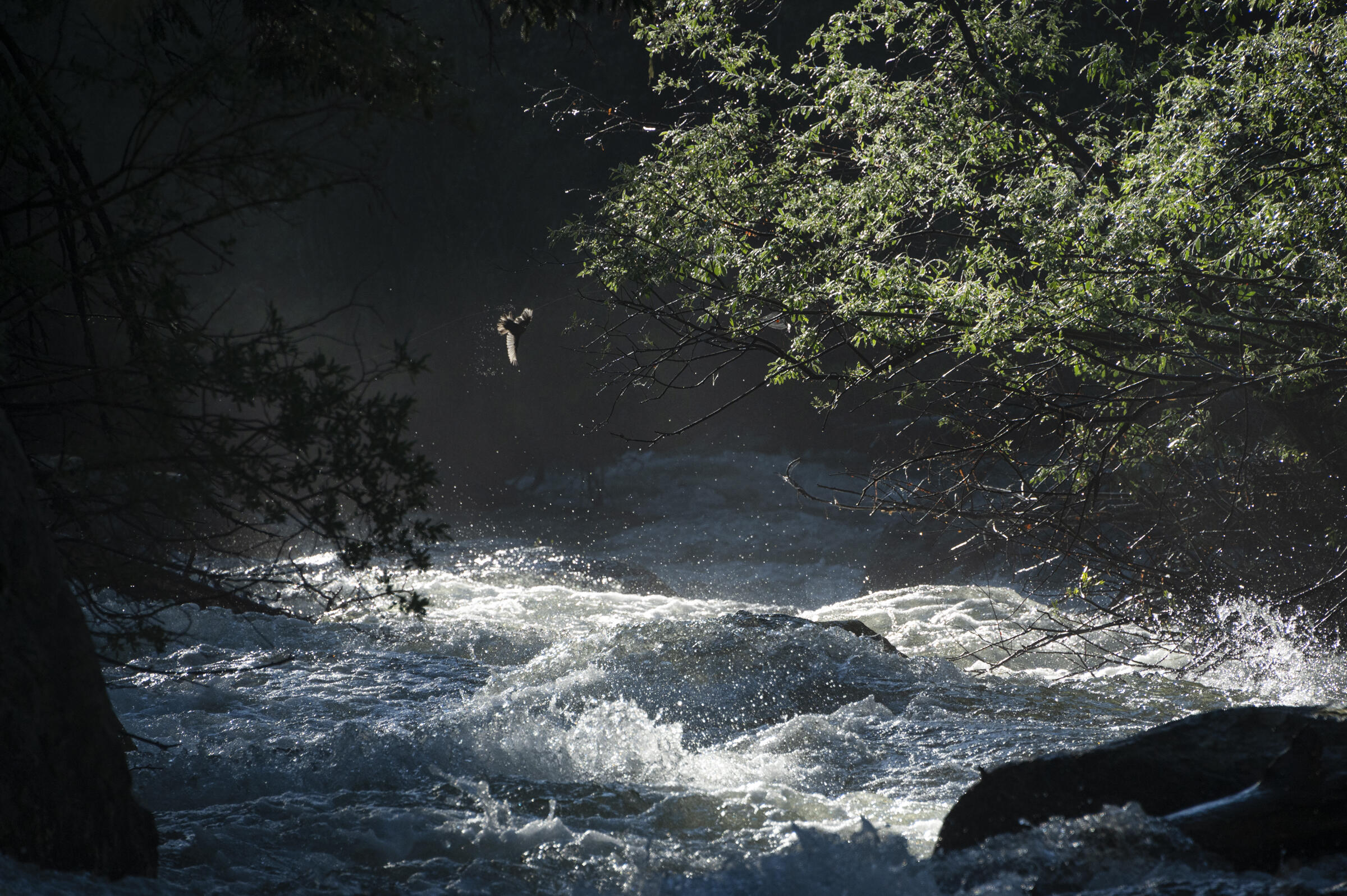 Above, an American Dipper makes a hard turn downstream, heading to a prime foraging area near its nest in Rocky Mountain National Park. After its chicks fledge, it will likely migrate.

“Although the distances they travel aren’t very far, there is a seasonal pattern to their movements,” says Christy Morrissey, a University of Saskatchewan biologist. Morrissey helped document their partial altitudinal migration: In winter the birds congregate in lower elevations; while some remain there to breed, most move upstream in spring to find suitable nesting habitat and then return downstream as summer turns to fall. 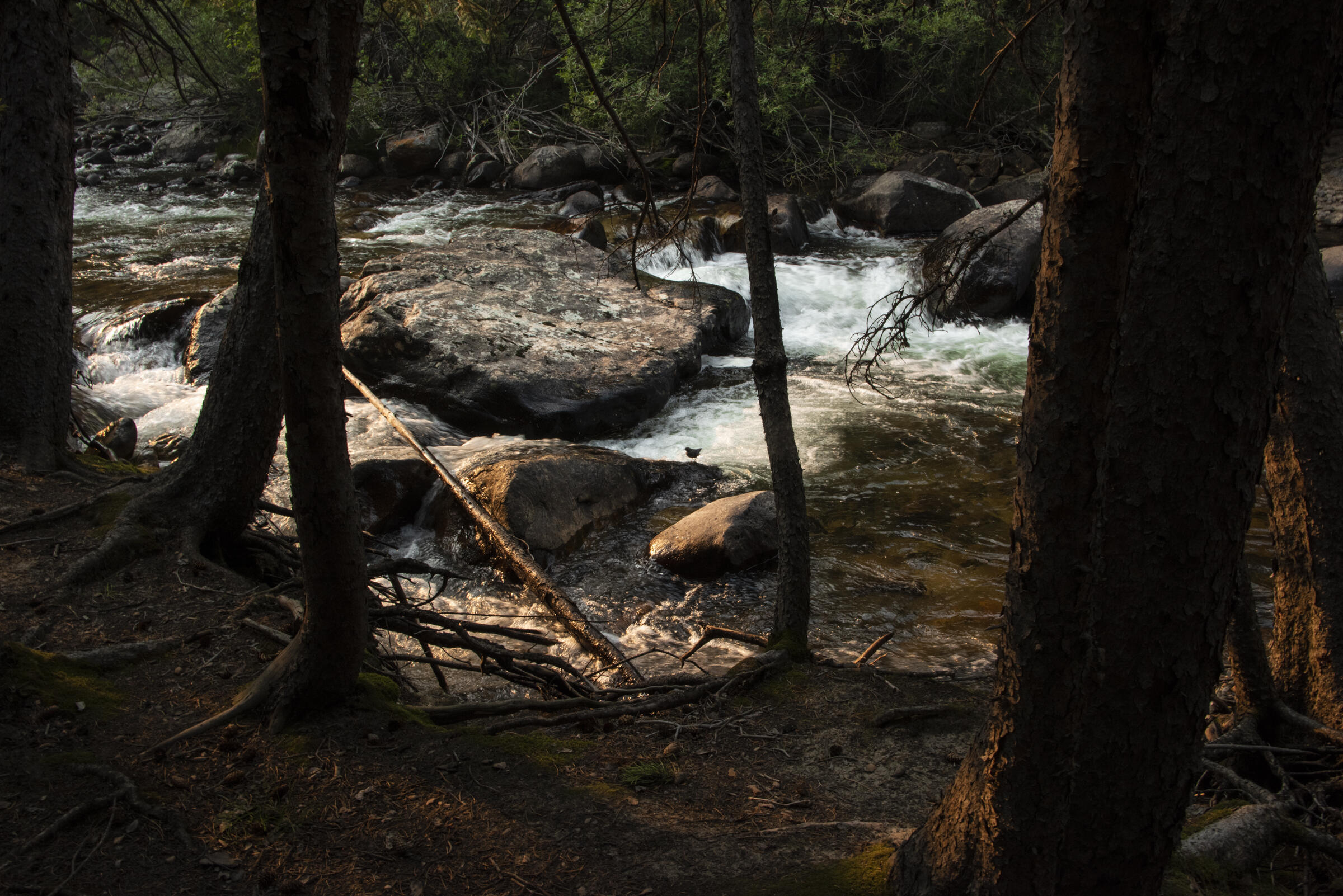 Whatever the season, dippers require clean, fast-flowing water. Pollution and damming of waterways pose threats, says Morrissey, as do flooding and drought, both of which climate change exacerbates. Forsberg echoes Morrissey’s concerns for the species’ future: “It makes me feel really good when I see them and hear them because I know, at least for now, that the place they’re in is in good shape.”

This story originally ran in the Summer 2020 issue as “The Life Aquatic.”​ To receive our print magazine, become a member by making a donation today.​

The Amazing Difference Found in Dippers on the Elwha River

In a post-dam era, salmon are bringing new vitality to the ecosystem.

A new video catches North America's only swimming songbird in the act.

Do You Know the Other Way Birds Migrate?

Some species change locales by merely moving between higher and lower elevations. Here are four examples of altitudinal migrants in the U.S.