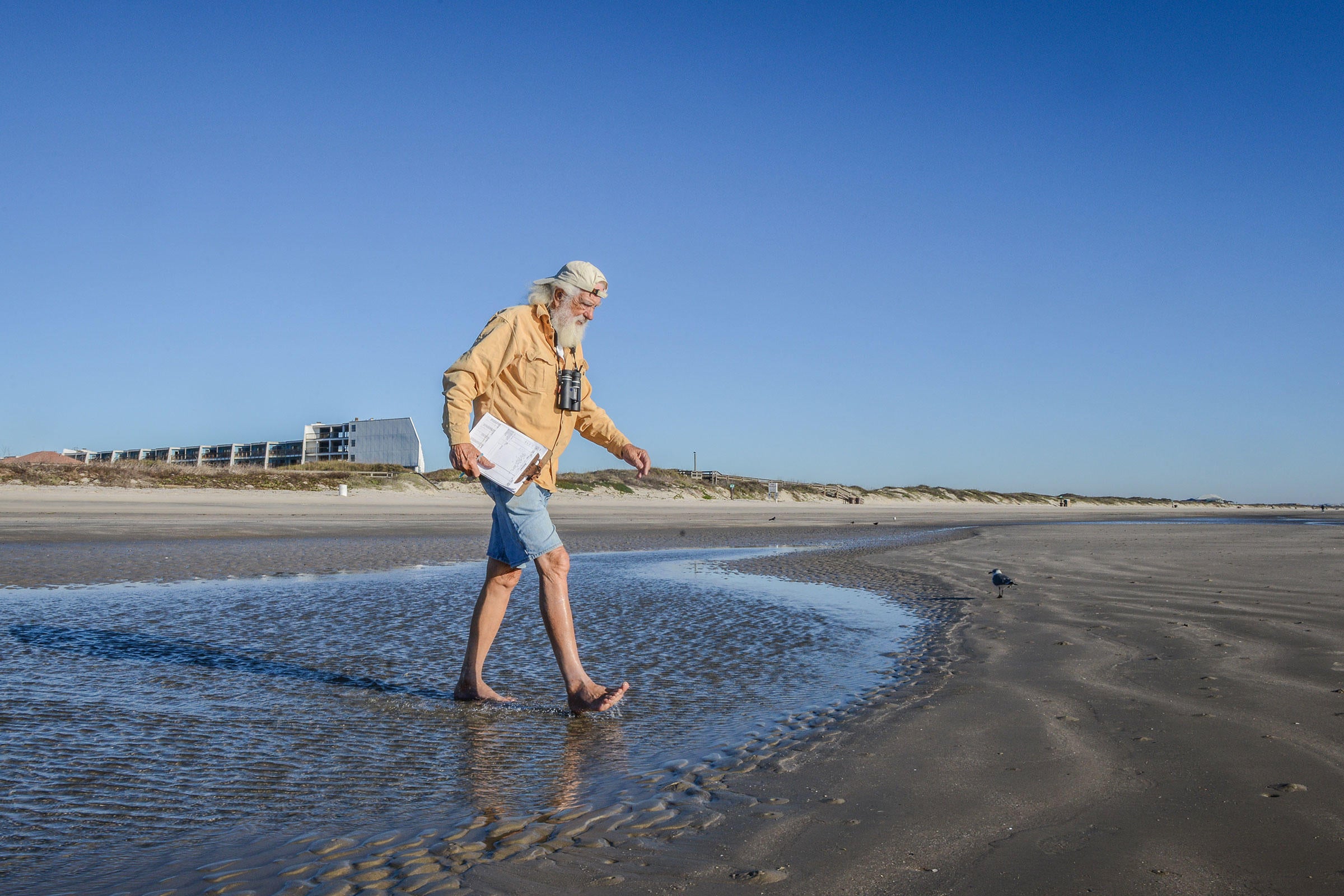 Tony Amos in January 2016, doing one of the 2,000 beach surveys he conducted on Mustang Island. Photo: Esther Horvath

A Life Dedicated to Saving Sea Turtles and Shorebirds

Tony Amos spent 40 years rescuing and studying wildlife on the Texas coast. After his death, and in the aftermath of Hurricane Harvey, a new generation is stepping up to continue his legacy.

By Alisa Opar/Photos by Esther Horvath

By Alisa Opar/Photos by Esther Horvath

For decades Tony Amos was as familiar a sight on the beaches of Texas’s Mustang Island as the wildlife he surveyed. Tall with flowing white hair and beard, Amos had surveyed a seven-mile stretch of beach every other day since 1978, recording everything from Piping Plovers and sea turtles to plastic bottles and helicopters. When he wasn’t out counting, he was rescuing injured turtles and birds and tending to them at the Animal Rehabilitation Keep, or ARK, which he founded in the 1980s at the University of Texas Austin’s Marine Science Institute in Port Aransas.

Amos was trained as an oceanographer, but when dead and injured sea turtles and Brown Pelicans began washing ashore in Port Aransas after the 1979 Ixtoc I exploratory oil well blowout, he felt compelled to do something beyond monitoring tides and measuring salinity levels. For four decades he rescued thousands of turtles and birds, and conducted thousands of beach surveys, his meticulous records tracking, among other trends, the resurgence of Brown Pelicans and decline of Red Knots.

“Tony is a hero and a legend in this area, and with great reason,” says Alicia Walker, who rescued many injured turtles with Amos over the years while working at Padre Island National Seashore; she signed on as ARK’s program coodinator last year.

Soon after Walker started at ARK, Amos told her that he had pancreatic cancer. “I’d just gotten chance of a lifetime to work with Tony Amos,” she recalls. “Then I learn he’s sick. I went into it thinking: I need to learn as much as I can from him.”

Amos died in September at age 80. But he’s still inspiring Walker and his other successors at the ARK. When Walker gets a call at 2 a.m. about a turtle tangled in fishing line or a pelican struck by a car, she gets up, puts on her shoes, and goes to help, because “that’s what Tony would do,” she says. “He made you want to be a better person, and scientist, too.”

His drive, even as his health began to fail, also inspired Jace Tunnell, ARK’s director. Last year, Tunnell joined Amos on a trip to a second long-term survey site, a 20-mile-long stretch of beach on privately owned San Jose Island. Amos visited every eight days to record wildlife and walk transects that extend from the water to the vegetation line, tracking how the beach changed over time. After eight hours, Tunnell went home to crash while Amos set about washing off the ATV and putting away supplies. “I was 42; he was 79,” Tunnell says. “His dedication was pretty wild.” 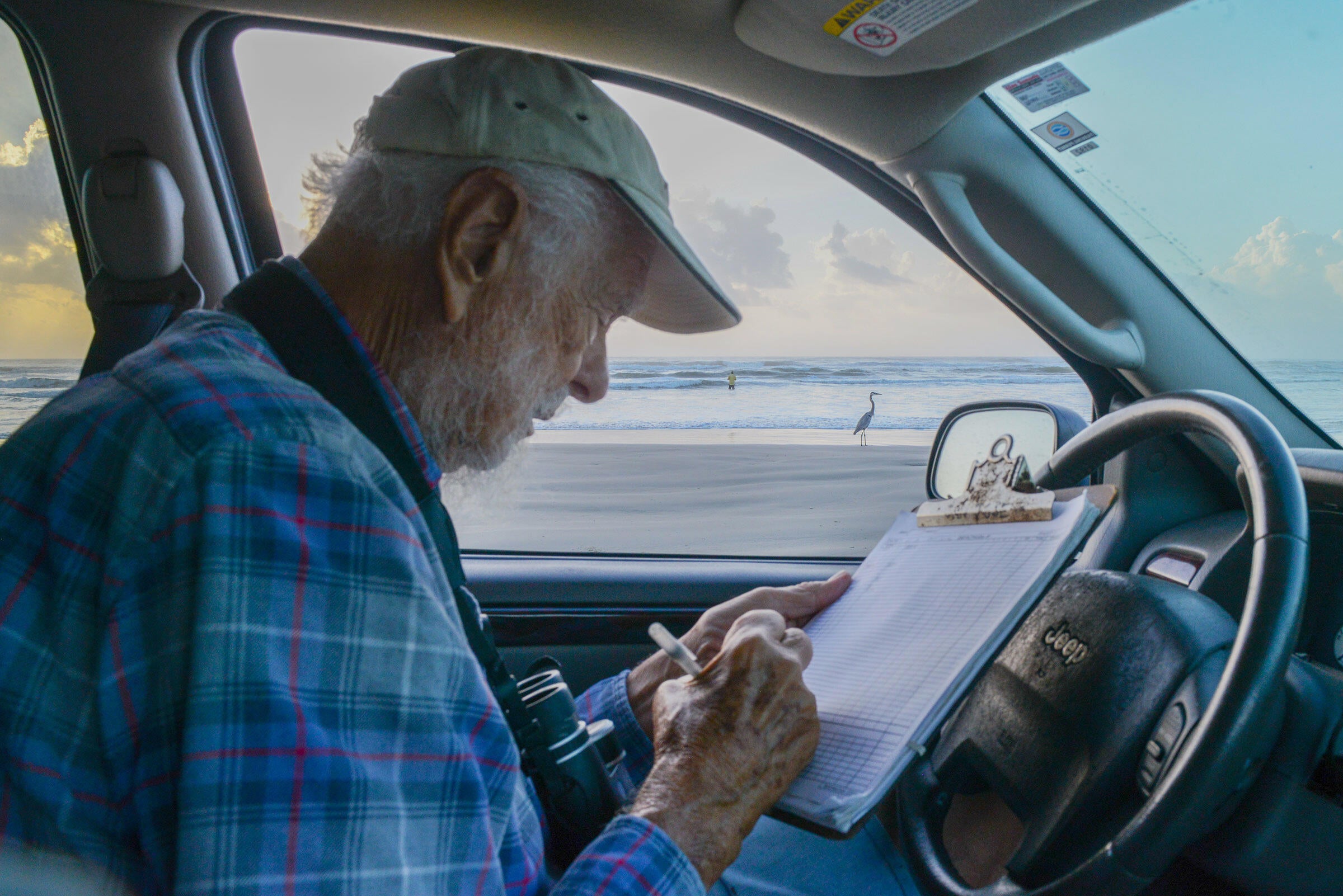 Tony Amos conducting a beach survey on a Port Aransas beach last October. Earlier this year the Animal Rehabilitation Keep, which he founded in 1982 to care for injured sea turtles and migratory and marine birds, was renamed the Amos Rehabilitation Keep in honor of his long-time conservation efforts. Photo: Esther Horvath

The dedication of those who are carrying on Amos’s work was put to the test at the same time that he passed away. Ten days before his death on September 4th, Hurricane Harvey hit the Texas coast. In the hours before the storm surge pounded Mustang Island, the ARK staff raced to secure the animals. They moved the 60 turtles into tanks in a hurricane-rated building, reasoning that the reptiles could swim if it flooded. They transported the 40 birds at ARK to a house about 40 minutes away that belongs to the parents of Andrew Orgill; the 22-year-old started out as a volunteer in 2009, when he was in high school, and was hired as a wildlife rehabilitator in 2012. Walker and Orgill had to make multiple trips to transfer all of the pelicans, hawks, owls, and other birds to the family’s big screened-in back porch. “His mom wasn’t too excited when we showed up with all these birds,” Walker recalls.

Two days after the hurricane, Walker, Tunnell, and Orgill returned to ARK, anxious about the fate of the turtles. When they arrived, they found a destruction zone. Bird enclosures had collapsed, and the shredded remnants of the 8,000 square feet of netting that surrounded them flapped in the breeze. The greenhouse covering an outdoor pool was a mangled mess. They climbed over the rubble to check on the turtles. To their immense relief, they were all fine, if hungry. Still, with no plumbing or electricity at the ARK, the staff had to move all of the turtles and birds to a facility on nearby North Padre Island.

One of the turtles returned to the wild with Amos’s ashes sprinkled on its back.

“Tony probably never knew the ARK was damaged as much as it was,” Tunnell says. “That’s my hope anyway. Though I think he’d be proud that we didn’t lose a single animal.”

Since the storm, the animals healthy enough to be released have been set free. On September 30, at Tony Amos City Beach in Port Aransas, one of the turtles returned to the wild with Amos’s ashes sprinkled on its back, spreading his remains throughout the habitat that he dedicated his life to studying and conserving.

Working out of their temporary home, the ARK team is still rescuing injured turtles and birds. Tunnell has taken over the thrice-weekly sea turtle surveys required under a 10-year grant funded by BP oil spill fines that Amos recently secured. And Orgill has taken over the bird surveys on Mustang Island, adding to the records Amos so scrupulously collected.

Meanwhile, the electricity at the ARK is back on, volunteers have cleaned up much of the debris, and construction on new bird enclosures will soon begin. A few months before Harvey roared ashore, the Animal Rescue Keep was officially renamed the Amos Rehabilitation Keep, and a sign with the new name was installed in late July. When Tunnell returned after the hurricane, he saw it lying facedown on the ground. With trepidation he picked it up, afraid it had been destroyed. It was still in pristine condition. “I got chills,” he recalls. “I put it right back up. It was a sign to rebuild.” 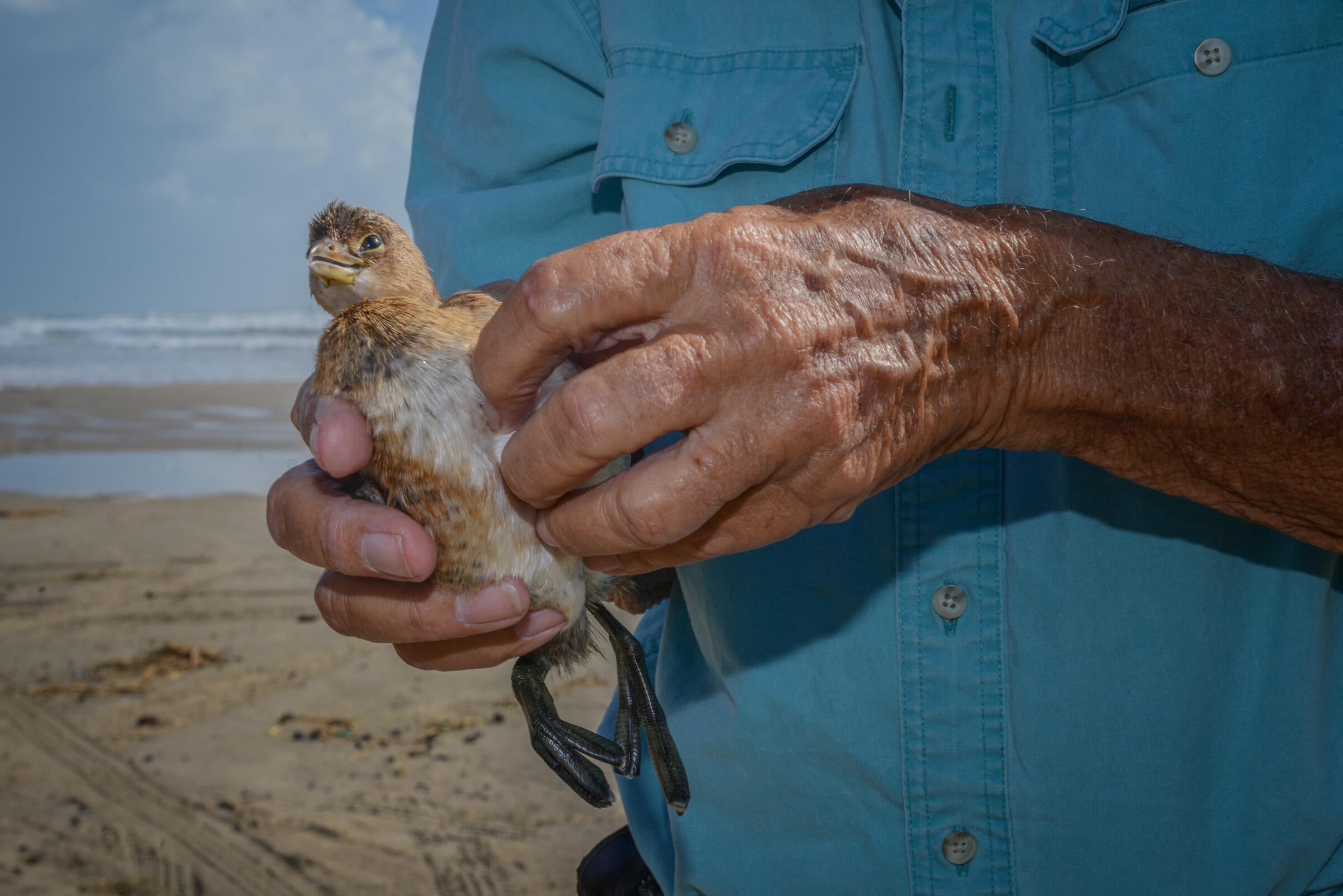 Amos collects a Pied-billed Grebe, which was reported through the ARK's rescue hotline. The organization's staff and volunteers have handled more than 15,000 birds and 5,000 sea turtles in its quarter-century history. Photo: Esther Horvath 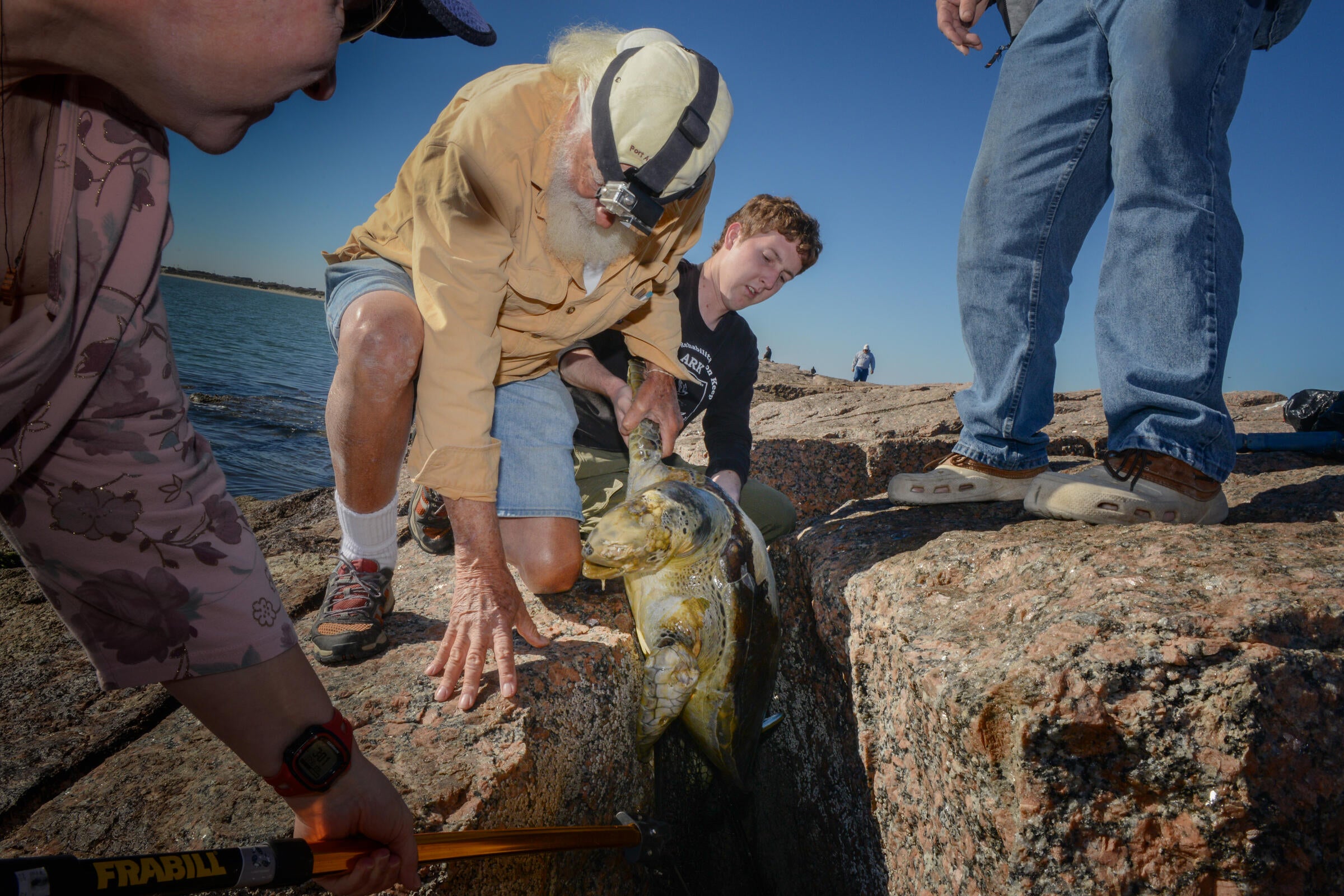 Tony Amos and wildlife rehabilitation Andrew Orgill rescue an endangered green sea turtle that had been hit by a boat propellor. Five of the world’s seven sea turtle species have been documented along the Texas coast: green, hawksbill, Kemp’s ridley, leatherback, and loggerhead. Photo: Esther Horvath 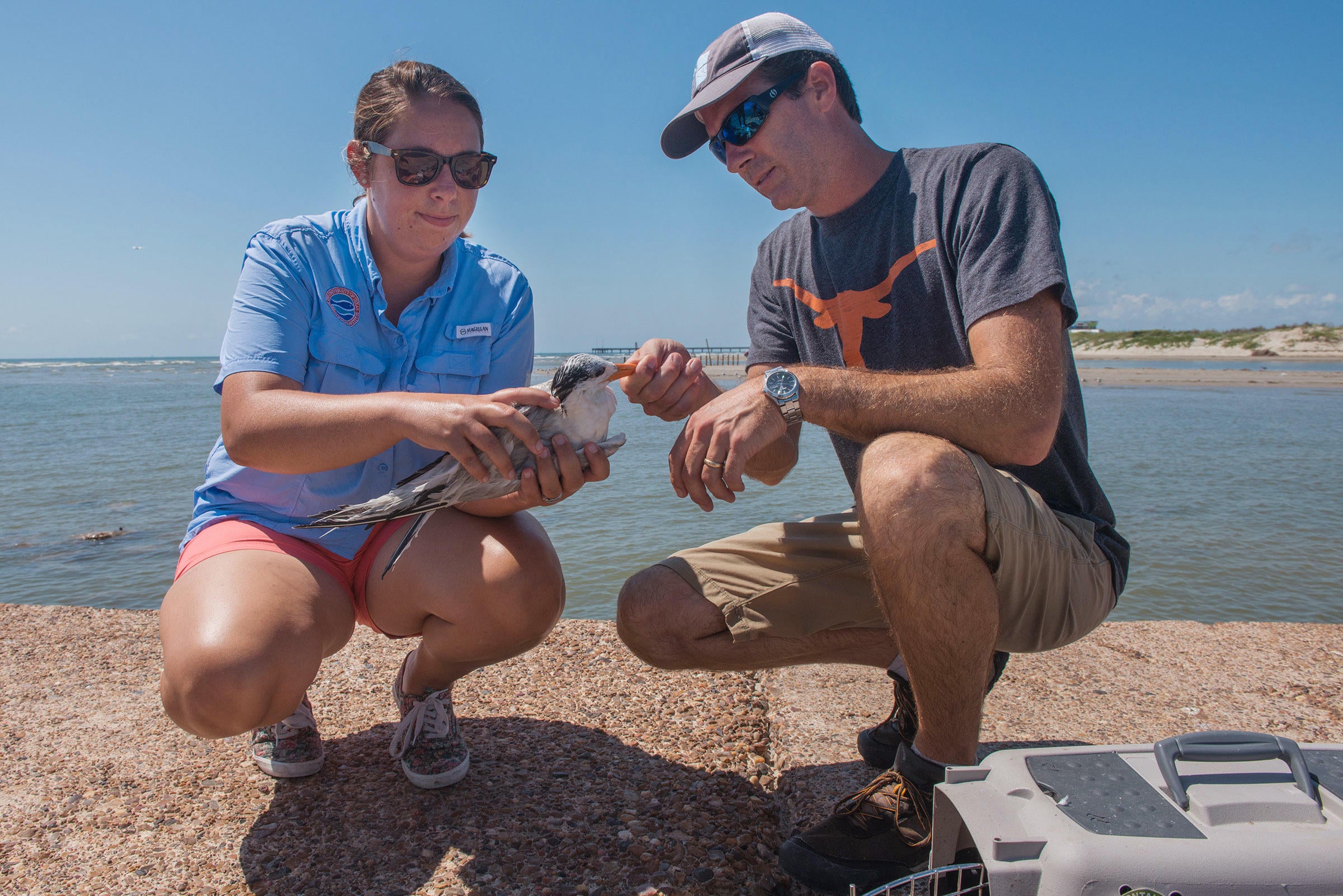 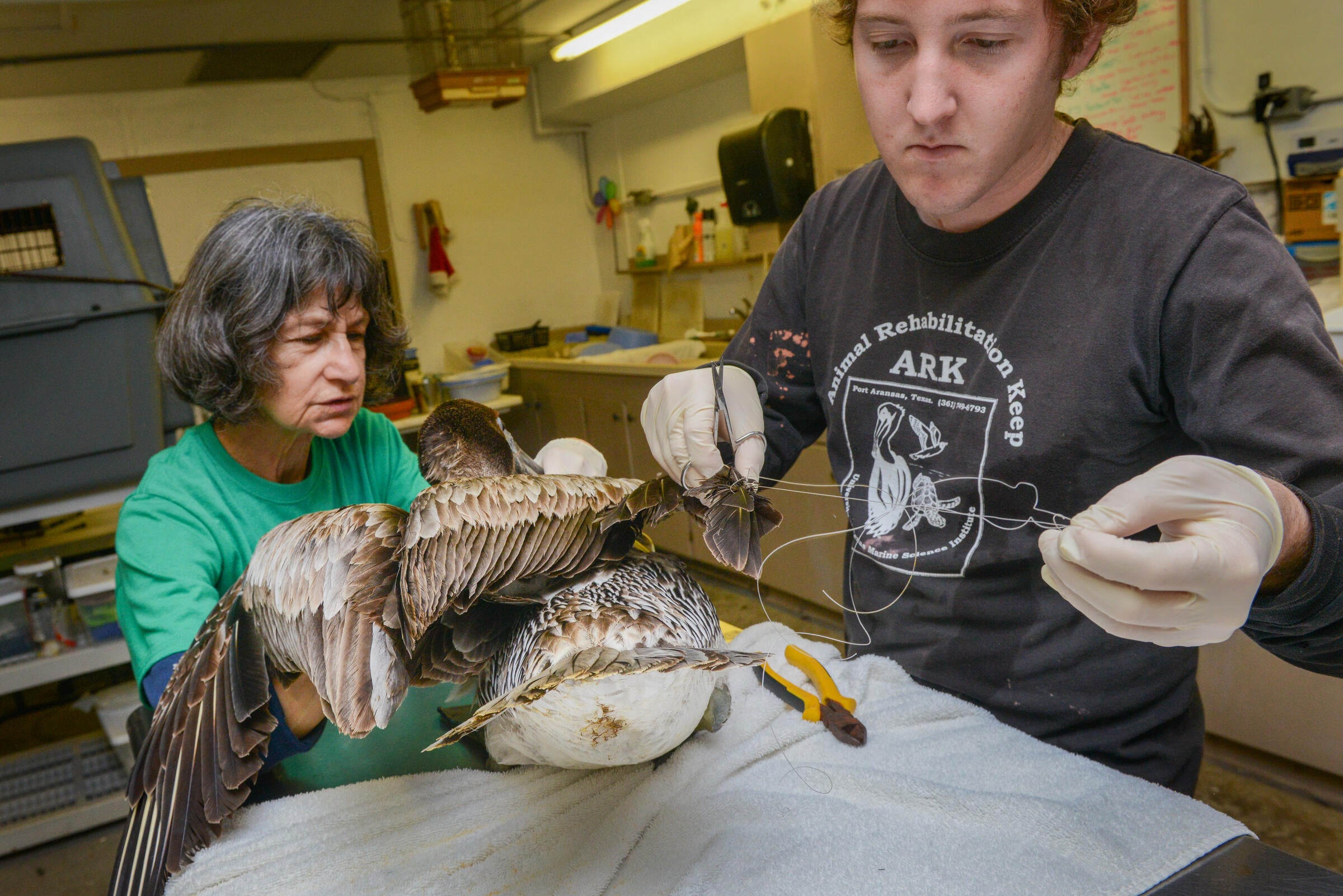 The vast majority of pelicans that ARK handles are injured by becoming entangled in fishing line, like this bird that Orgill (right) and Tina Neumann treated in January. Photo: Esther Horvath

Pelicans recuperate in a 60-foot-by-60-foot enclosure in October, 2016 (left); the same structure after Hurricane Harvey tore through. Photo: Esther Horvath 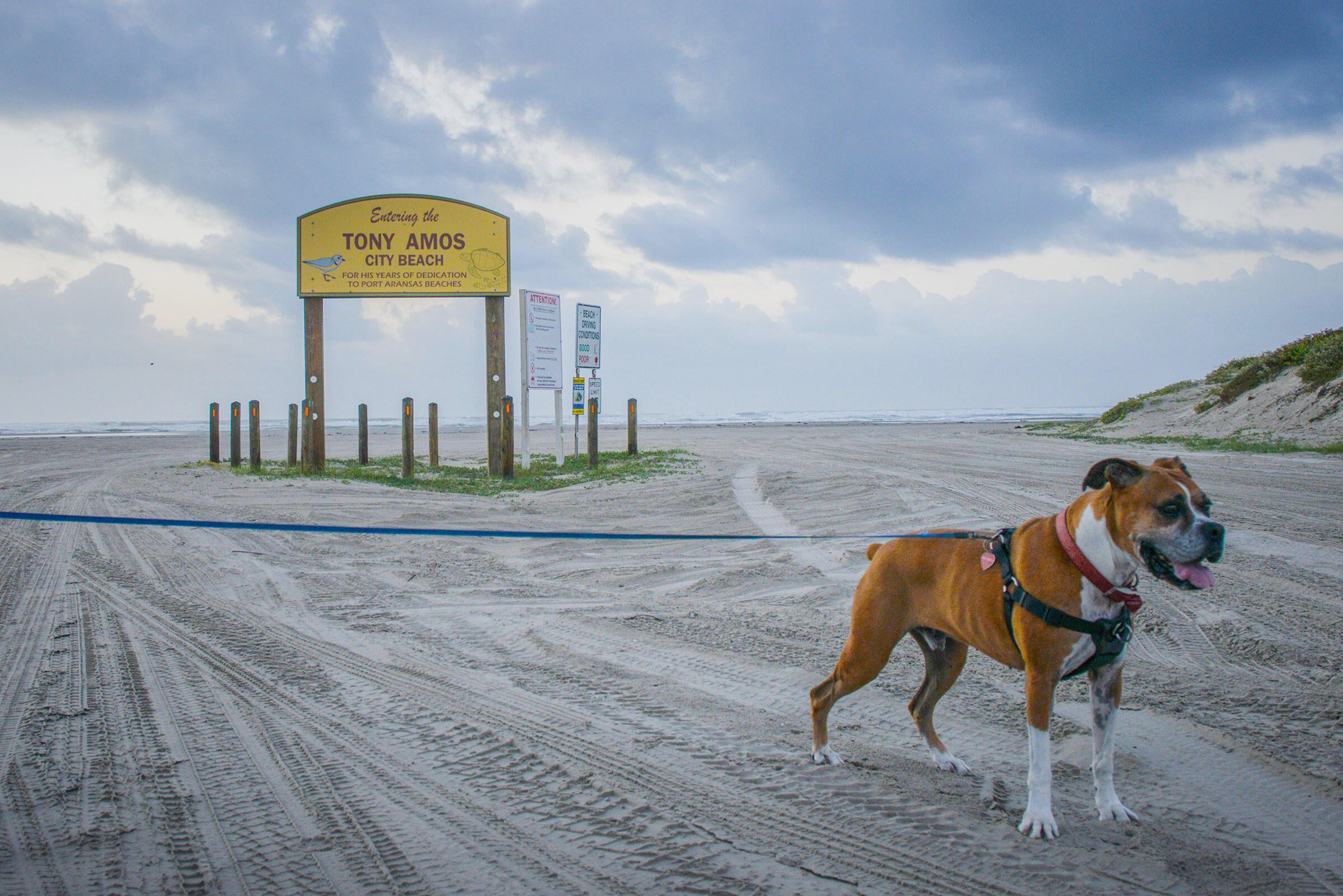 The Port Aransas city council named the town's southern beach Tony Amos City Beach in 2015. Dogs have to be on a leash to protect wildlife, which includes overwintering Piping Plovers and Red Knots. Photo: Esther Horvath

Meet the Greater Honeyguide, the Bird That Understands Humans

On the African savanna, a fascinating and unprecedented partnership between people and wild birds gets started with a simple "brrr-hm."