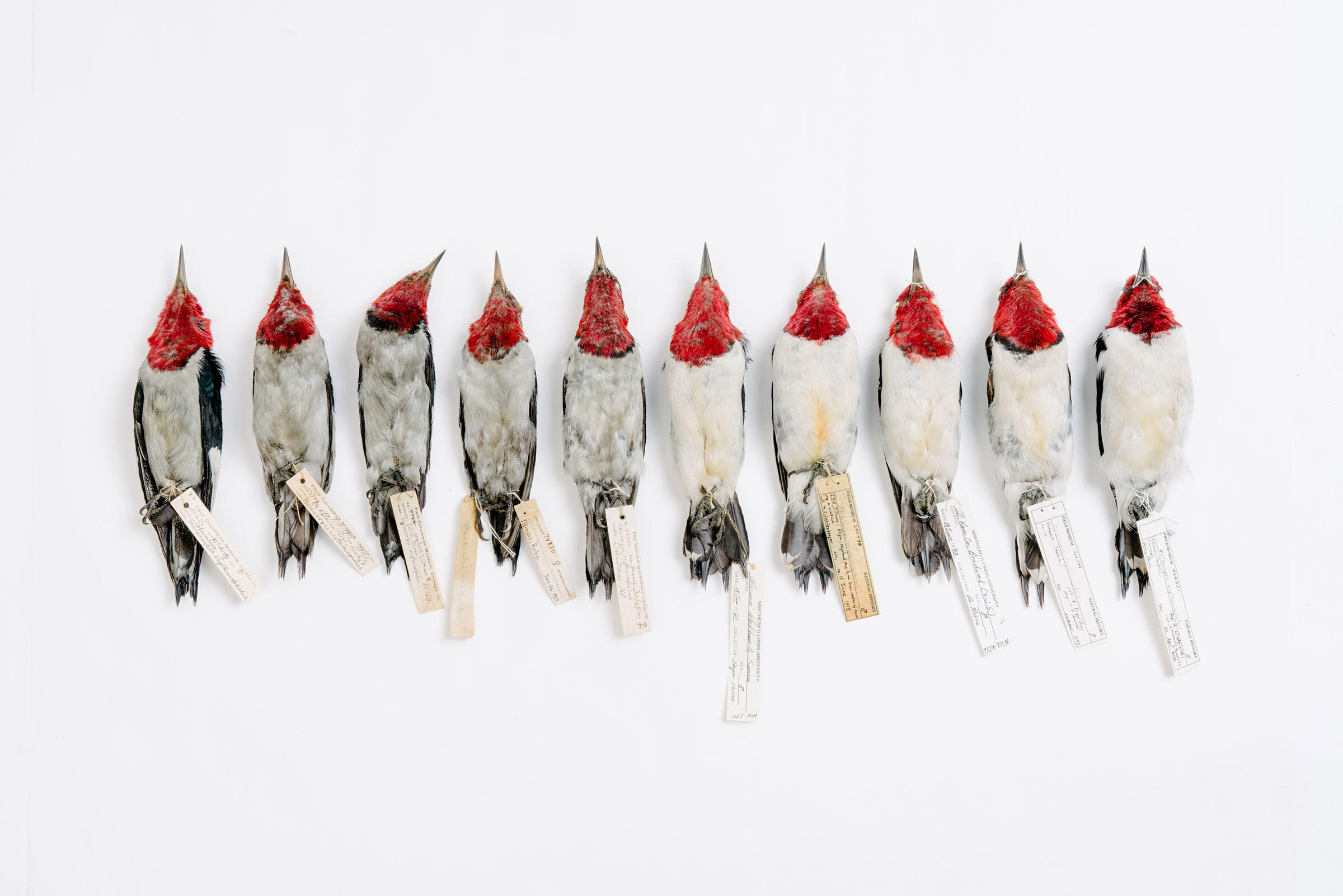 Red-headed Woodpeckers from the late 1800s to present day are lined up in chronological order to show the dramatic difference in black carbon—or soot—pollution on their feathers. These birds were photographed at the Field Museum in Chicago. Photo: Tristan Spinski

Sooty Feathers Tell the History of Pollution in American Cities

Preserved birds and digital photos help pinpoint levels of black carbon and the changes that led to its decline.

Back in 1874, it was hard to see the sun in Chicago. The city was rebuilding after the Great Fire of 1871 by adding row after row of new factories, which belched so much smoke that city-dwellers came home caked in a thin layer of black dust after a day outdoors. And it wasn’t just Chicago: Other cities in the U.S. Rust Belt such as Detroit and Pittsburgh were enveloped by the same dark smog.

The soot even marked small birds, which collected it on their feathers while flying. Now, nearly a century and a half later, modern scientists are using those darker feathers to infer information about the history of pollution. Using digital photography and 1,347 bird specimens from three museums, biologist Shane DuBay and art historian Carl Fuldner were able to track the sootiness of the air in the Rust Belt from 1880 to 2015. Their study was published yesterday in the Proceedings of the National Academy of Sciences.

Scientifically called black carbon, soot is the result of burnt organic matter like wood, oil, and coal. It’s been linked to respiratory illnesses and cancer, and more recently has been recognized as a major contributor to climate change, Gregory Carmichael, a biochemical engineer at the University of Iowa, says. “Unlike other particles in the atmosphere, black carbon absorbs solar radiation because of its color and acts as a greenhouse gas.” And according to the Center for Climate and Energy Solutions, black carbon may be second only to carbon dioxide in driving global warming.

Though traces of black carbon can be found all around, there aren’t many ways to measure its prevalence in the atmosphere. Early naturalists observed that birds living near natural wildfires were darker in color due to soot: John James Audubon wrote in the Downy Woodpecker entry of Birds of America that its breast and belly were “soiled by the carbonaceous matter," noting that the grayed woodpeckers could be mistaken as a different species altogether. To see if darker feather color could be used as a pollution indicator, DuBay and Fuldner, both PhD students at the University of Chicago, scoped out the Field Museum’s vast historic collection, which includes 500,000 data-rich bird specimens. There, they noticed a spike in feather discoloration starting in 1882. “A lot of the earlier specimens are actually much more pristine than the specimen around the turn of the century,” Fuldner says. “This was one of the initial clues.”

With Fuldner’s background in photography—particularly birds—and its techniques, the duo devised a way to analyze digital images and quantify how the concentration of soot on feathers changed over the decades. They visited two collections in addition to The Field Museum: the University of Michigan Museum of Zoology in Ann Arbor and the Carnegie Museum of Natural History in Pittsburgh. At each location they set up a lightbox with a paint strip called a reflectance standard to photograph the subjects in a consistent, efficient way. “It was almost like this conveyor belt of [specimens],” DuBay says. The species selected for the study all had white bellies, which showed carbon residue more clearly. They included Eastern Towhees, Horned Larks, Grasshopper Sparrows, and Red-headed Woodpeckers. All the specimens were preserved between 1880 to 2015. 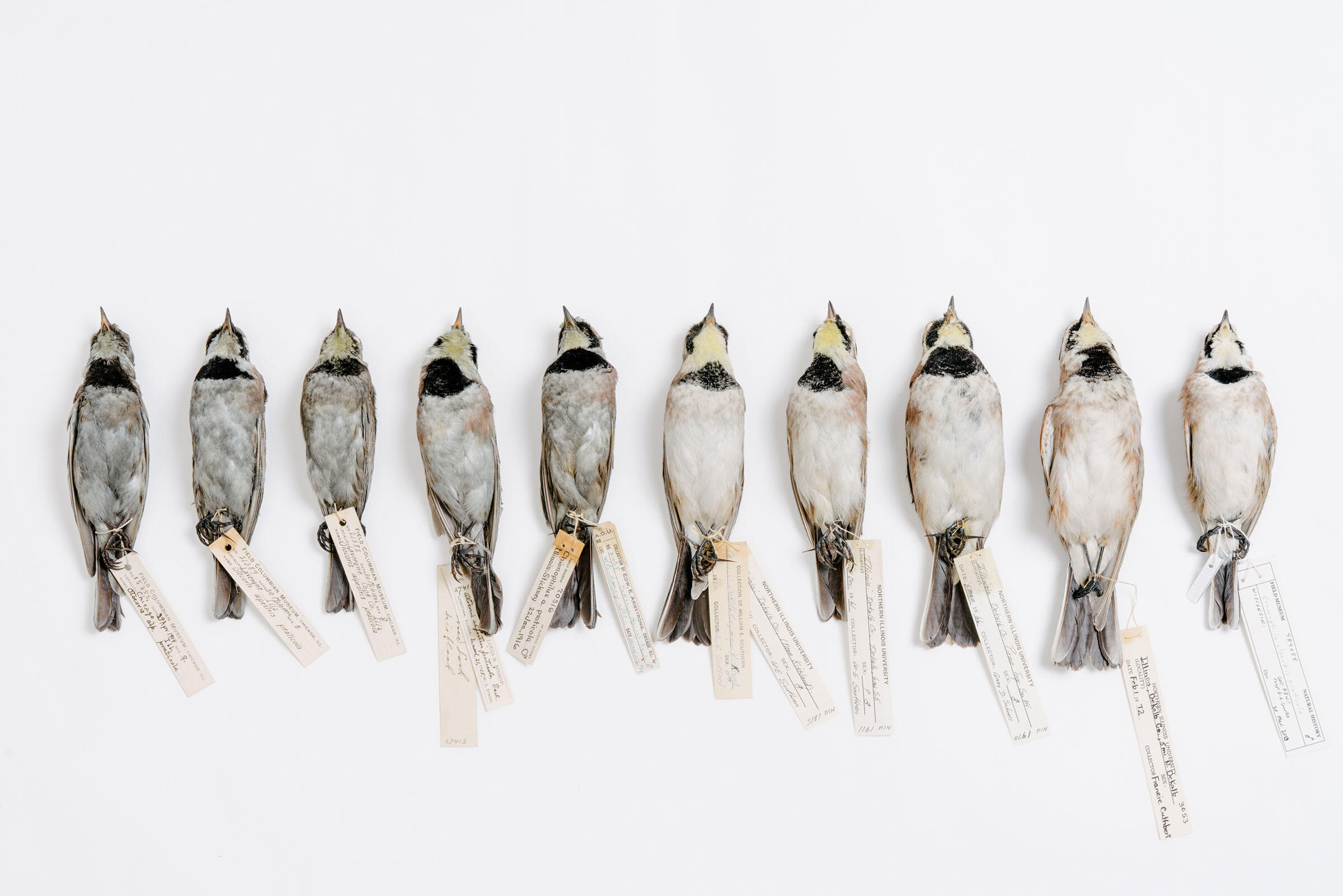 Then DuBay and Fuldner used a raw image analyzer on the thousands of photos they produced to determine how reflective (or dark) the birds’ bellies were. Once they had their numbers, they charted the changes over time. They then compared that trendline to previous estimates of historic black carbon emissions.

What they found was that the specimens’ dirtiness tracked environmental turning points in the country’s history.

What they found was that the specimens’ dirtiness tracked environmental turning points in the country’s history. Both feather and air pollution peaked during the first decade of the 20th century, when coal emissions reached its all-time high. The pattern then dropped off during the Great Depression, and rose during World War II as manufacturing ramped up again. But soon after the war, it decreased dramatically, marking the impact of regulations like the 1955 Air Pollution Control Act and the 1963 Clean Air Act. Fuldner and DuBay’s methods was so sensitive, in fact, they revealed a small dip in black carbon between 1880 to 1910. This could be traced back to early environmental reforms and anti-smoking initiatives in individual cities, the researchers say.

As the study rebuilds the past, feather by feather, it also informs us on how we can maintain a healthy, livable world today. “Knowing about our past is how we can prepare for the future,” DuBay says. The work shows that the gradual pushback from the mid-1900s environmental movement were successful in curbing harmful particles in the air.

But their findings also remind us that we have a long way to go. While air quality isn’t nearly as bad as it was in the early 20th century, studies suggest that today’s soot levels are still problematic, even contributing to 30 percent of recent warming in the Arctic. With the White House thwarting plans to cut carbon (see: the Paris Climate Accord, vehicle-emission standards, and, most recently, the Clean Power Plan), these birds from museum drawers show that air pollution has undeniable impacts on wildlife—even if they aren't always easy to see.

Audubon is a nonprofit, and stories like this are made possible by readers like you. You can support our journalism by making a donation today.