Speak Up For Birds Today

Birds are sending us an urgent message about climate change. You can help them by sharing #BirdsTellUs. 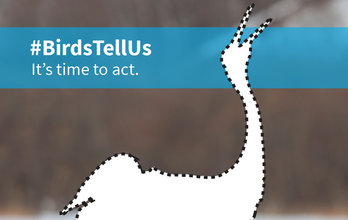 World leaders are on their way to Paris right now to participate in the 21st Conference of the Parties to the United Nations Framework Convention on Climate Change—better known as COP21. The summit will attempt to find a plan on which all countries can agree for limiting the global increase in temperature. That’s a tall order, and we'll leave them to it. But while they’re working on that, there are some easy things you can do from home to show your support for climate action now and even contribute, in small ways, to limiting global warming.

After all, climate change is poised to be the number one threat to North American birds in this century. Taking action is the least you can do.

1. Spread the word—virtually. Birds are basically canaries in a coal mine when it comes to climate change. Global warming is already affecting them in many places: In North America, temperature changes are pushing species out of their ranges, which could seriously threaten their ability to survive. Internationally, a new report shows that climate change likely threatens more than one-fifth of all bird species worldwide. Take to social media to spread the word, and raise awareness using the hashtag #BirdsTellUs.

3. Watch a movie.  Yes, seriously. In the lead up to COP21, several environmental documentaries are coming out. Two are available for viewing for free over the first few days of the Paris Conference. Time to Choose, a film from Academy Award winner Charles Ferguson, is a powerful global tour that exposes how the problems causing climate change are also responsible for myriad other issues worth solving—and proposes a way forward. The film is streaming for free online via the Huffington Post for 48 hours starting November 30.  Plus, Racing Extinction, a tour-de-force that explains how wildlife is suffering across the globe, will premiere on the Discovery channel on December 2 at 9 p.m. EST.

4. Start working on that carbon footprint. This is a broad challenge, but the United Nations has your back—they’ve compiled a complete guide to small actions that could add up to big reductions in the amount of greenhouse gases each person generates during daily life. Check out their page, find some actions that will easily fit into your lifestyle, and get cracking.

5. Spread the word—in person. Sure, tweeting is important, but so is talking in person. Research shows that people’s response to global warming is actually heavily influenced by what their loved ones think about the issue. So explain to those closest to you why you care—if you’re having trouble getting started, see our guide for how to explain the threat climate change poses to birds to your family.