A Birder's Dilemma: Should You Name Your Baby After a Bird?

As parents-to-be, The Birdist and his wife considered birdy names for their son. Here's what they decided. 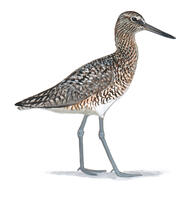 Back in January, my seven-month-pregnant wife Liz was a tornado of activity. She was setting up the registry, scheduling doctor's appointments, planning for the nursery, getting us on daycare waiting lists, and of course, carrying the baby. I, meanwhile, was sitting around, thinking about what we'd name the kid. It wasn’t as relaxing as it sounds.

In fact, choosing a name for our baby boy, we learned, was next to impossible. Both of us made a list of names we liked, and then started culling. First, every option needed to be cross-checked against a database of names forever tainted by exes, crushes, bullies, weird uncles, the names of friends, the names of friends’ kids, regular uncles, pets, co-workers, and co-workers’ kids. Next, to avoid future playground embarrassments, the list had to be investigated for potential rhymes with swear words, insults, bawdy slang, and bodily excretions pulled from the deepest, most depraved corners of the internet. After that, it’s a wonder anyone gets a name at all.

Being a birder brought its own level of complication. As soon as my wife and I announced we were pregnant, friends and family began asking me whether I’d name the baby after a bird. I love birds, and I love bird names (see evidence A, B, and C), so there was a lot think about. As Liz narrowed her ideas down, I considered the different types of birdy monikers.

The first group I identified was names that don’t seem birdy, because they’ve been normalized away from their avian roots. Robin was once the 53rd most popular name for girls, and is also common among boys, more thanks to Batman’s sidekick than Turdus migratorius—a Latin name just asking to be made fun of, it's worth noting. I had the name Martin on my list before I even remembered it was also a bird (I like the nickname Marty). Phoebe, Jay, Piper, and Brent—British for Brant—are other examples. But if someone isn’t going to think of the actual bird when they hear the name, what’s the point of giving your kid the label at all?

The second group is made of sneaky bird names. How many would know that my son, Al R. Lund, is actually Albert Ross Lund, named after the majestic albatross? We genuinely considered this. What about Bob White Lund? Charles William “Chuck Will” Lund? My mom was beside herself with glee when she thought of Oliver William Lund, because the initials spell O.W.L. Clever, I had to admit.

I chewed over some over-the-top choices, too, just for kicks.

I chewed over some over-the-top choices, too, just for kicks. This is my son Bobolink. This is my son Pyrrhuloxia. These are my children, Gull, Tern, Noddy, and Skimmer, and over there is little Kittiwake.  No concerns about having an ex with one of those names, at least.

I also pitched cool names like Heron, Petrel, Swift, and Finch to Liz. She responded to each one with a reality check.

Finally, there’s that sweet spot when a name is unmistakably birdy, but is charming on humans. Wren is a lovely name that’s gained popularity in recent years, peaking at #465 in 2016. A friend of mine named his daughter Sora. Another named his Ani after the Hawaiian word meaning “beautiful.“ Willet, of all things, was the 15,488th most-popular boy's name in 2013.

Eventually Liz asked me to think about why I was pushing for this, and whether a birdy name was in the best interests of our kid. Did he need to carry on my own birding legacy? She was right. My son may very well grow up to love birds—I really hope he does—but he also might not. It should be his choice and not mine. If my dad had named me after some of his hobbies, you’d be calling me Carl Yastrzemski Lund or Rapala Lure Lund, and then I’d have to live with that

Throughout this whole parenthood process, I need to remember to let our son grow up to be who he is, not necessarily who I want him to be. Forcing my passion onto my son might deprive him of finding his own, like playing the guitar or painting or (please no) ventriloquism. So, Liz and I decided in the end that giving him a birdy name just wasn’t for us. I’m still going to bring him birding as much as possible, because any well-rounded person should be immersed in nature. (But also because he’s a kid and needs to go where I go). If you see us out together, feel free to help him have a good time by saying hello. His name is Elliott.

Nick Lund is a contributor to Audubon magazine and Audubon.org, where he regularly writes the column The Birdist's Rules of Birding. You can find more of his writing on his personal blog, The Birdist.

Helping the next generation learn the joys of birding is important, but first you have to make it fun. Try these tips.

Brighten Your Day with Some Sweet Baby Bird Pics

Brought to you by the 2017 Audubon Photography Awards.

Baby birds are about to be on the loose, but identifying them can be tricky.