Larry Rivers, the multimedia creative dubbed the “grandfather of pop art,” is known for his bad-boy persona. The New York City legend rocked the art world of the 1950s and ’60s, when he fashioned pieces now coveted by collectors that radically questioned popular tastes by transforming the real world into an abstraction.

At heart, however, Rivers was an animal lover. Wildlife always inspired the provocateur, even if it didn’t show until his later work. “He grew up across the street from the Bronx Zoo,” says Natalie Friedman, the associate director of the Los Angeles gallery 101/EXHIBIT, which is about to play host to many of Rivers’s bird portraits. In the last decades of his life, he pursued a project called “Art and the Artists,” in which he recreated the masterpieces of famous artists in his definitive style. He painted Warhol. He painted Picasso. He painted Ernst. And he painted Audubon.

This weekend, on April 1, a new show featuring those paintings inspired by John James Audubon is opening at 101/EXHIBIT. Friedman and other gallery staff conceived of the series—titled “Explorations of Audubon: The Paintings of Larry Rivers and Others”—after acquiring Rivers’s estate in fall of 2015. When reviewing the collection, they were taken by his paintings that imitate Audubon’s large Birds of America folio prints.

They decided the first large exhibition of Rivers’s work—his Audubon pieces—would be best complemented by new contemporary works done in the same vein. The gallery reached out to the art community, and they weren’t disappointed. Twenty artists used Audubon’s Birds of America as a guide to create new paintings for the exhibition, which includes 27 portraits in total (see a sampling in the slideshow at the bottom).

“It’s an homage to an homage,” Friedman says. “Larry was able to show his own personal technique while studying Audubon’s work. So we’re showcasing even more contemporary techniques and using the same imagery that Larry was inspired by.”

Some of the paintings reveal artful tweaks on the classics. Tom Sanford’s rendition of a California Condor is a close copy of Audubon’s illustration in positioning and stature—except that it stands atop a pile of trash in front of a golden background. “I just loved that image. I can’t improve on this thing,” Sanford says of Audubon’s original painting. “I just added gold and garbage.”

In doing so, Sanford points to the implications of pollution on a bird’s habitat. Fast food wrappers and beer cans pile beneath the condor’s talons (perhaps as a stand-in for the pesticide DDT, which decimated condor numbers in the 20th century), and a person’s skull rests near the bottom of the trash heap. The foreboding image presents the modern predicament facing the species: human interference. It’s a subject familiar to Sanford, who also contributed to the Audubon Mural Project in Upper Manhattan, which recognizes the 314 North American bird species threatened by climate change.

Other paintings reference symbolism that humanity has cast upon birds over the centuries since Audubon’s original publication. Artist Kristen Schiele says that when perusing Audubon’s work, she immediately thought of her time studying art in Berlin, where she saw firsthand the powerful wartime imagery of hawks utilized by leaders of Prussia and Germany in the 19th and 20th centuries. She chose to create an image of a Broad-winged Hawk beneath layers of colorful, tribal patterns that she describes as feminine.

“It’s a seductive image,” Schiele says. “It’s a nice way to use a masculine and aggressive symbol and make it into something a woman made—happy and vibrant. The hawk becomes incorporated into the design.”

But for all of that modern meaning and artistic interpretation, the show is ultimately a collection of bird portraiture. For Schiele, the painting is “the essence of the bird itself,” more so than any symbols we might tether to it. And that’s a sentiment with which John James Audubon would surely agree.

Birds of America – Explorations of Audubon runs from April 1 to May 13 at 101/EXHIBIT in West Hollywood, Los Angeles, California. 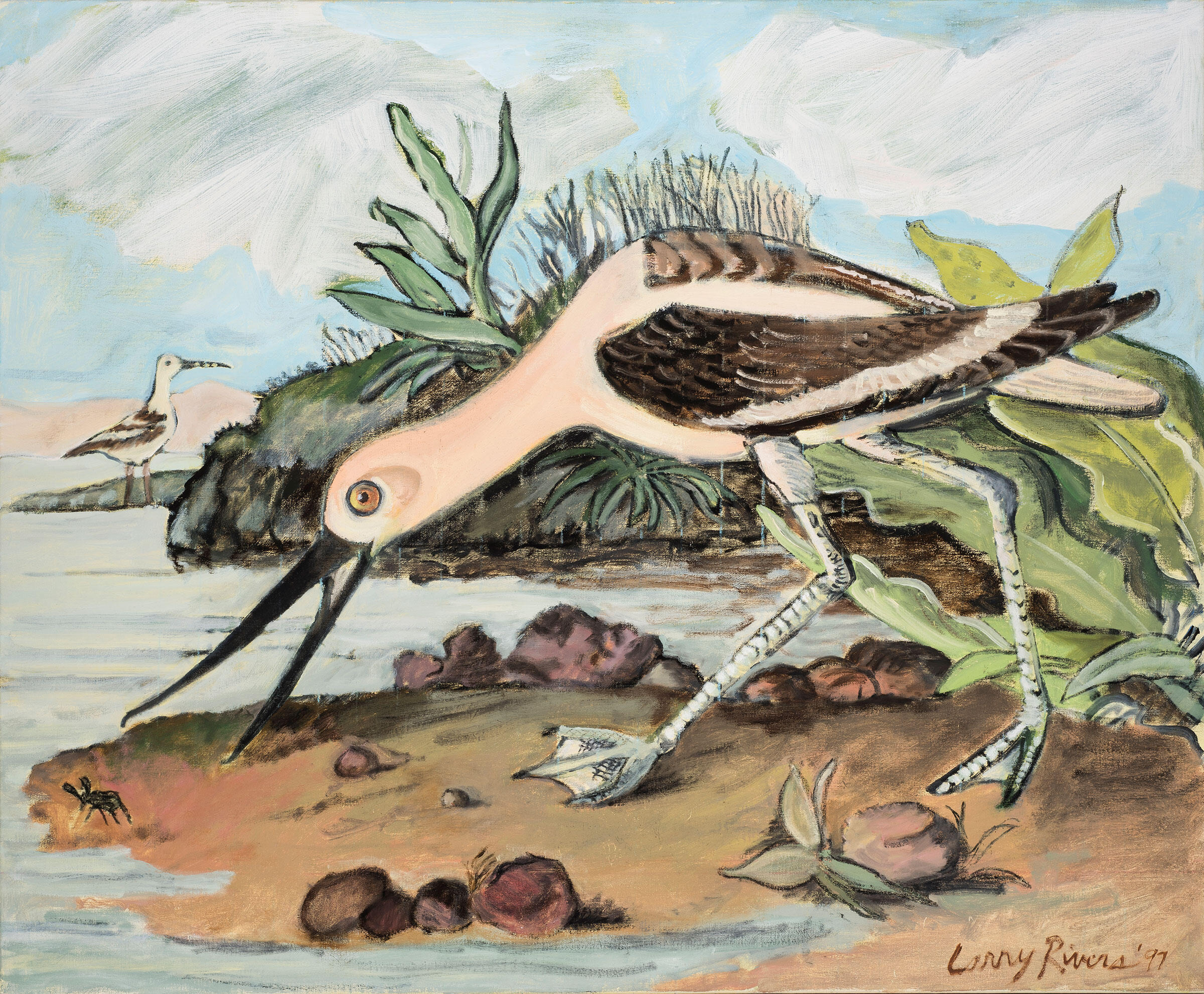 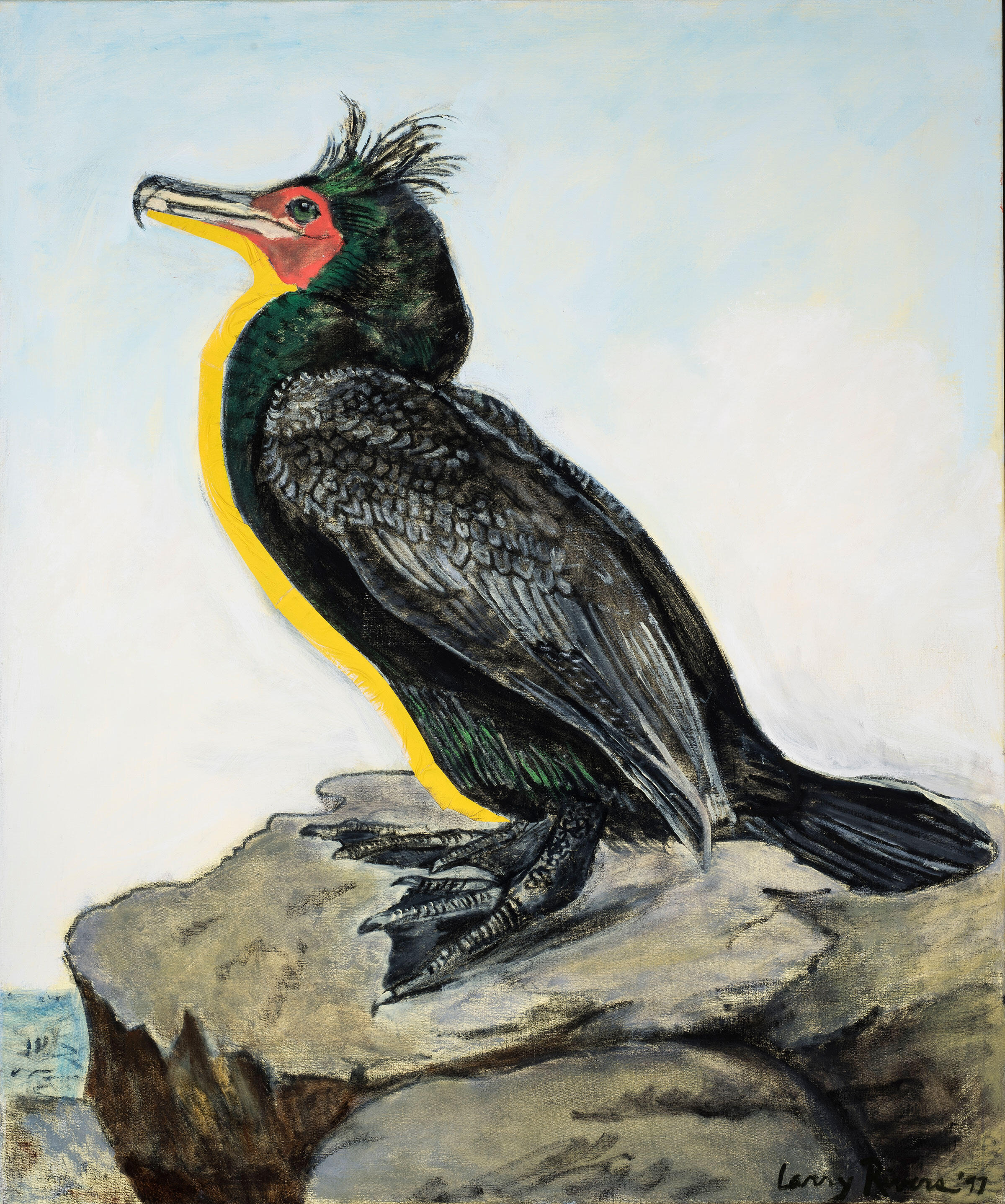 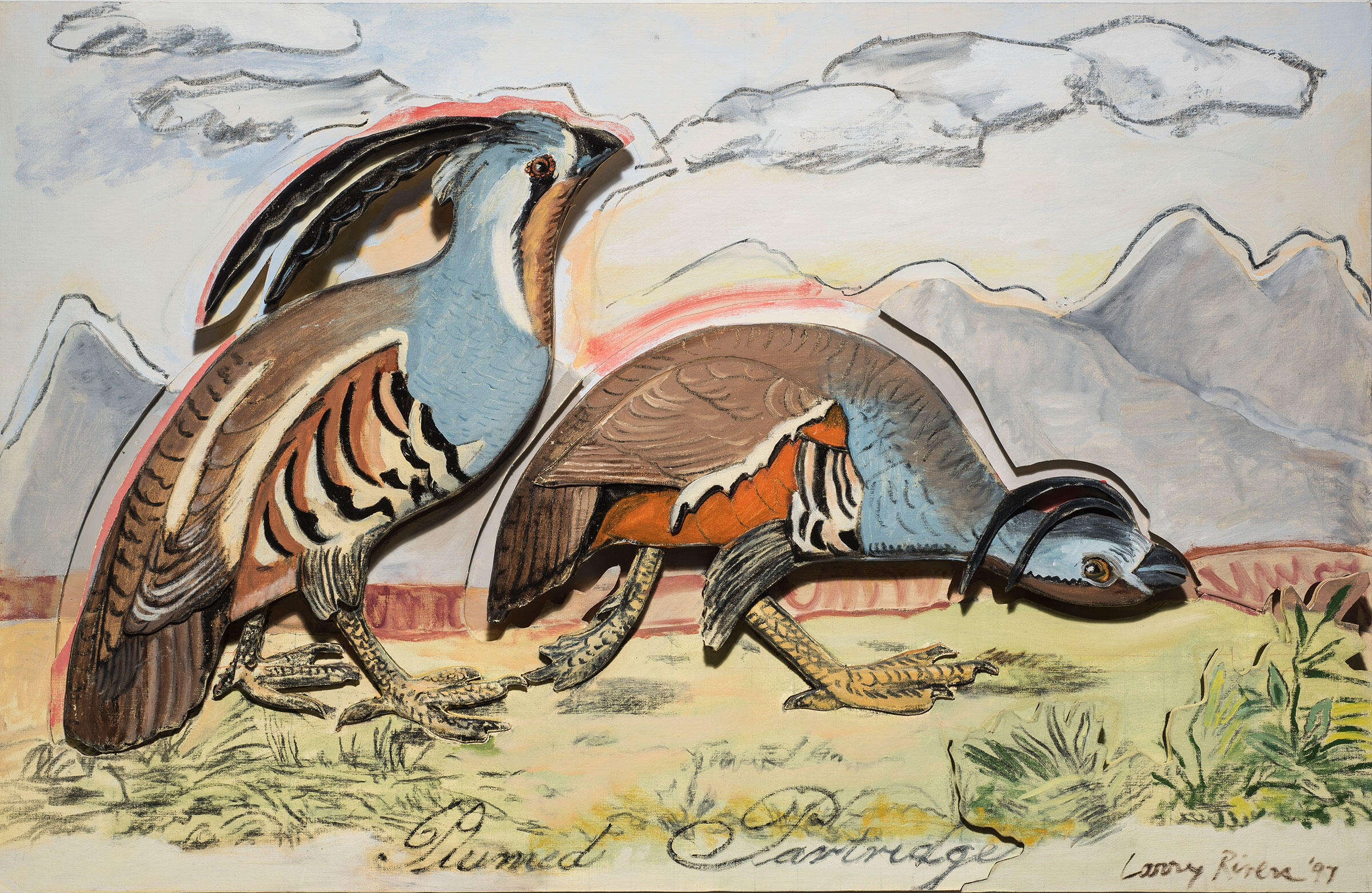 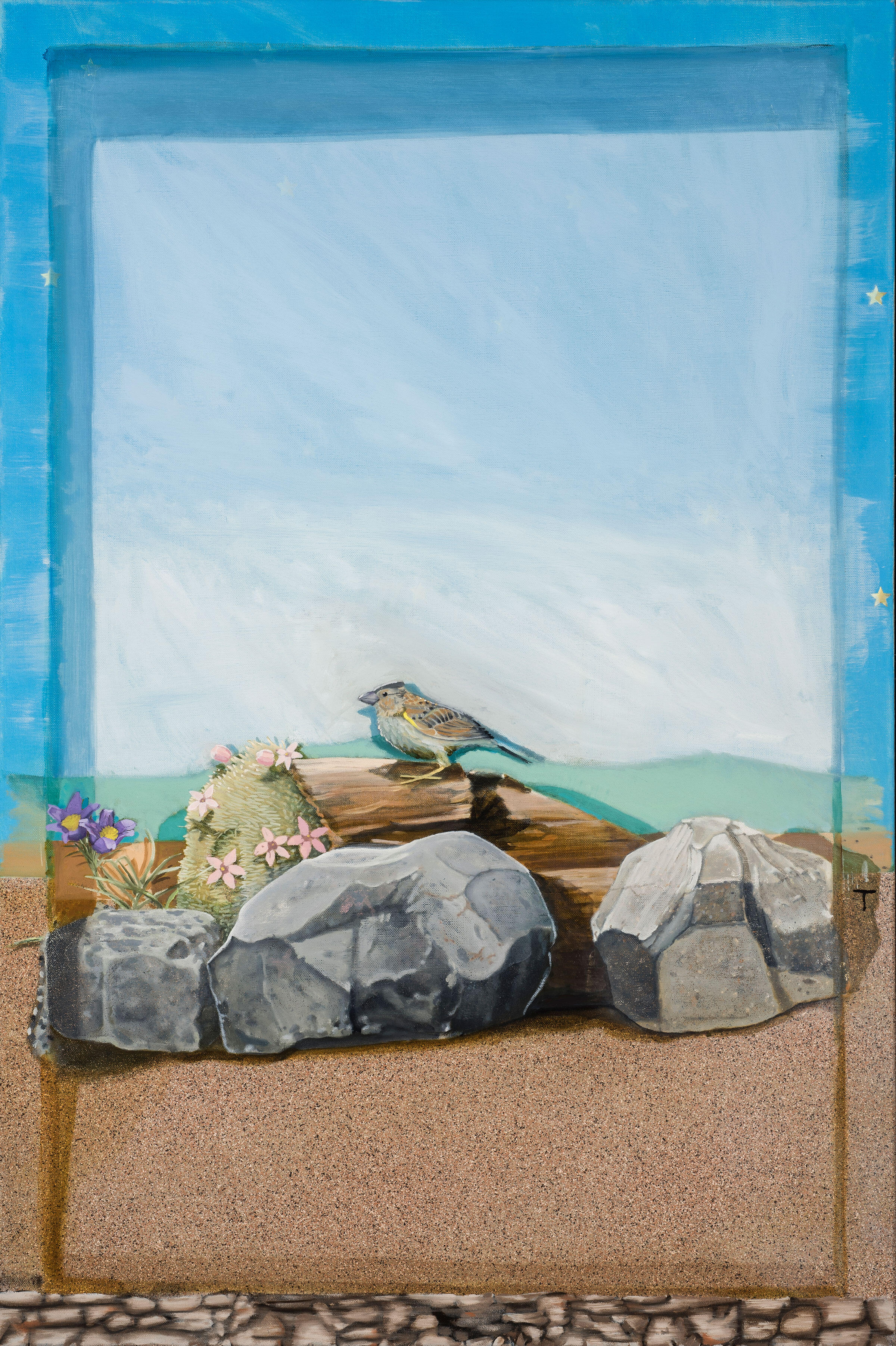 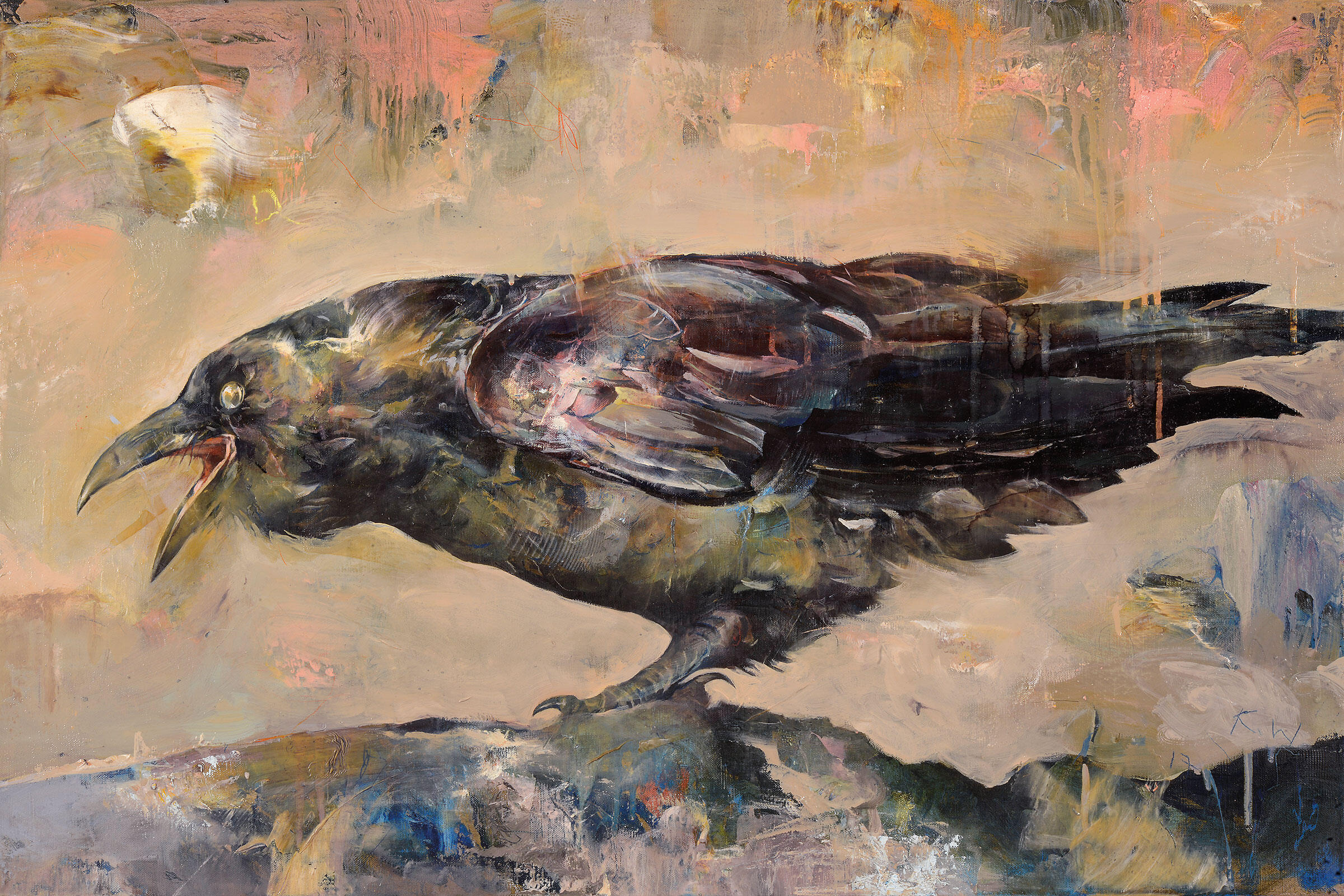 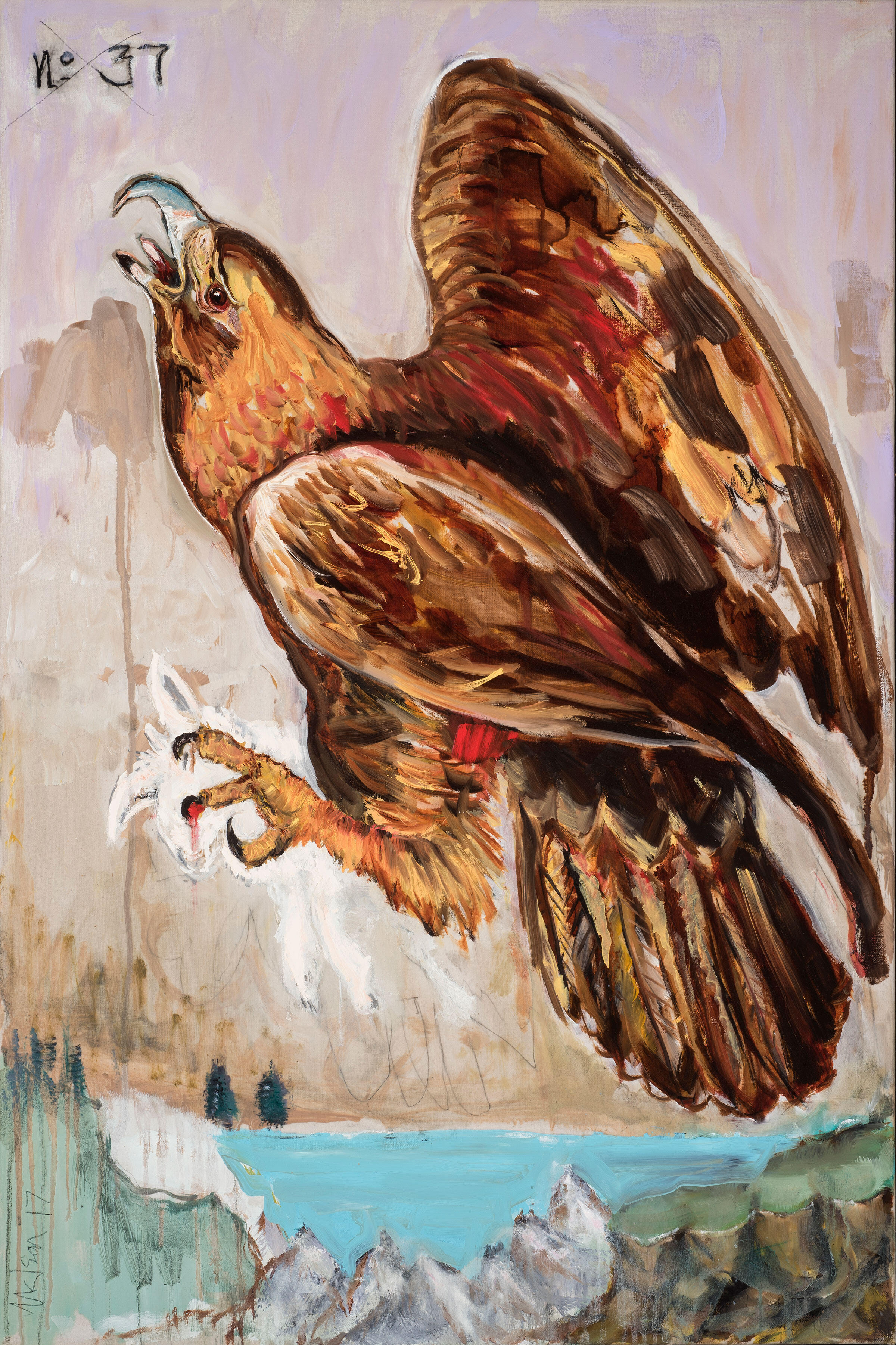 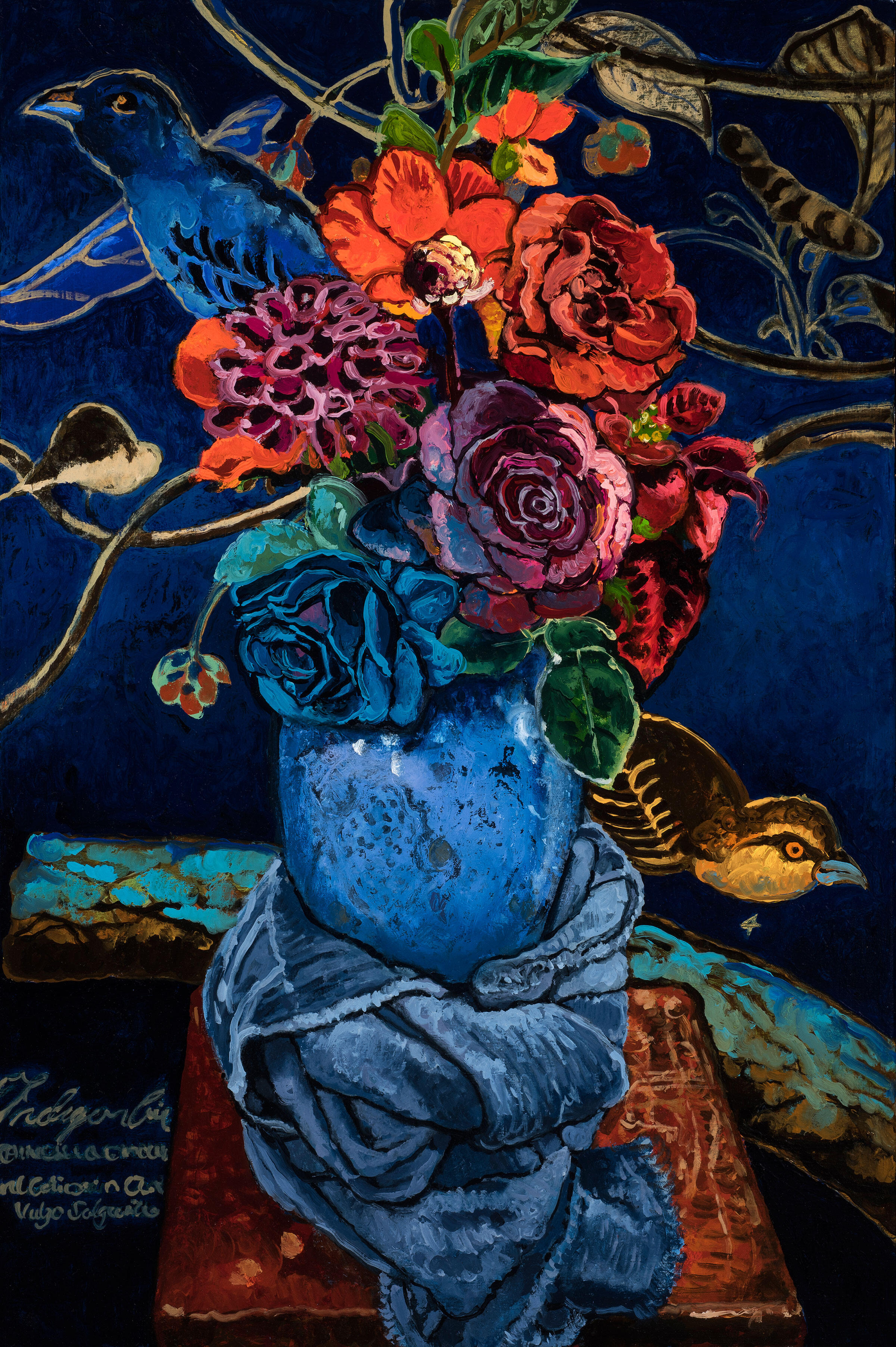 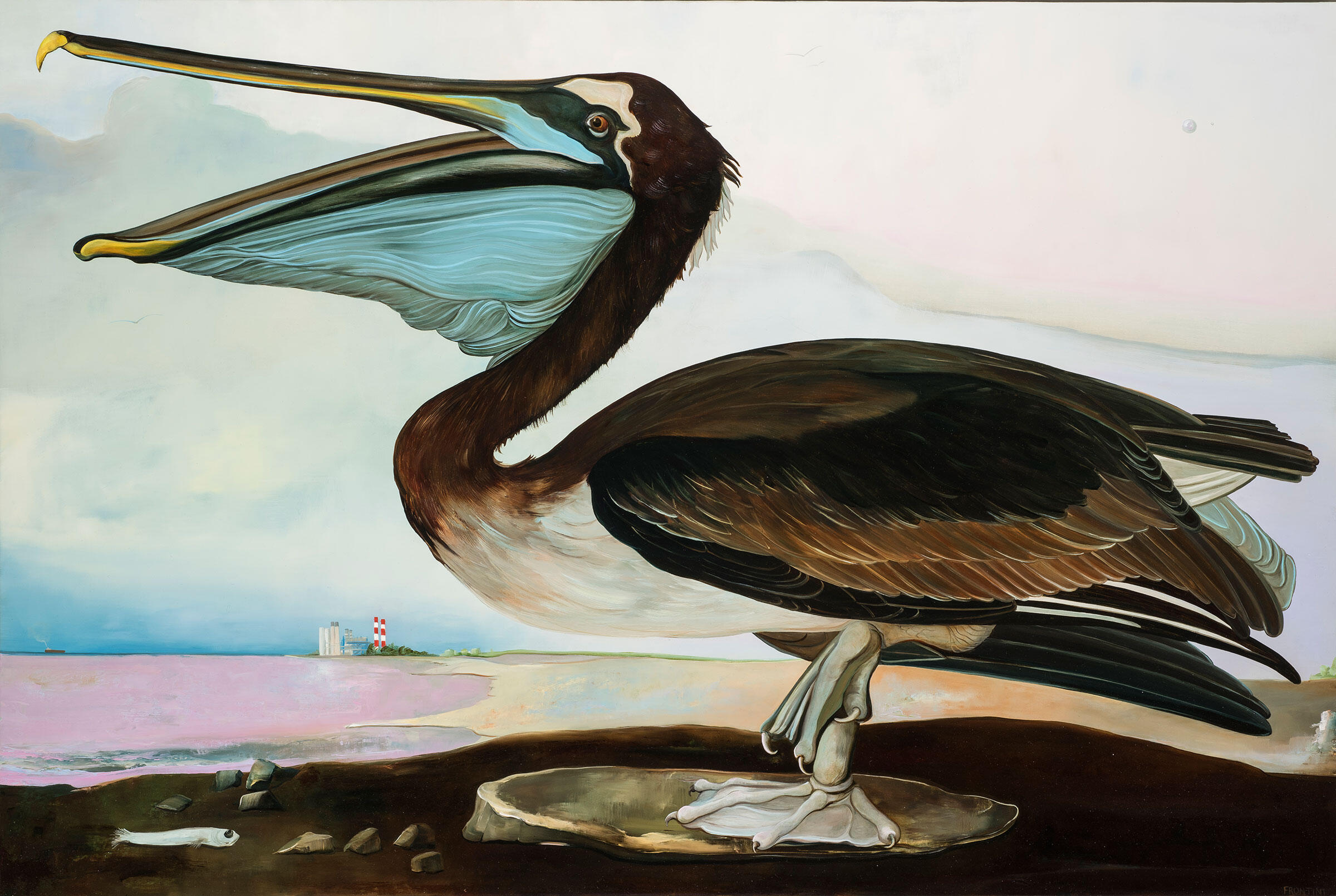