A month after Hurricane Dorian ravaged the Bahamas, David Knowles returned to Great Abaco Island with mixed emotions. The isle’s long-time park warden was anxious to learn how the birds and landscapes he manages had weathered 185-mile-per-hour winds, but also dreaded seeing his destroyed home and neighborhood for the first time since the Category 5 disaster.

Hurricanes are frequent threats in the Bahamas, but Dorian—the second strongest on record in the Atlantic Ocean—stood out, hitting Great Abaco on September 1 and then dumping up to four feet of rain on neighboring Grand Bahama Island over 40 hours. Sixty-seven people in the Bahamas died according to the toll as of mid-October, with hundreds still missing and 14,000 people displaced, including Knowles and his family.  A recent report estimated  $3.4 billion in damages to the islands. “It was really heartbreaking,” Knowles said after seeing the wreckage, “like someone dropped a bomb on these communities, on the city, and just walked away.”

Knowles knew the human devastation would be bad, but didn’t yet know the extent of damage to avian habitat. In mid-October, he and colleagues from the Bahamas National Trust (BNT), which manages the nation’s parks, carried in food and potable water for five days of field work—just enough time to capture baseline data and begin shaping a recovery plan. Caroline Stahala, Audubon Florida’s shorebird program manager and a longtime Bahama Parrot researcher, joined the effort, which was supported by Audubon's International Alliances Program. Conditions were still grim, but waiting longer wasn’t a good option: “It was very important to go shortly after the storm, when the conditions would be the most difficult for the birds,” says BNT’s avian coordinator Bradley Watson.

For threatened avian species in the Caribbean, especially those with already-small populations and narrowly restricted ranges, a strong cyclone can be a major setback. In 2017, for example, less than half of only around 200 Puerto Rican Parrots alive in the wild survived Hurricane Maria. The situation was even more dire for the endangered Puerto Rican Sharp-shinned Hawk. And in the Bahamas after 2016’s Hurricane Matthew, scientists and birders mourned the possible extinction of the Bahama Nuthatch, a critically endangered tree climber found only on Grand Bahama Island. It took two years for searchers to discover a handful of individual survivors.

As climate change warms surface seawater and raises atmospheric temperatures, creating the conditions for stronger Atlantic hurricanes, the team’s goal is to learn from Dorian, not just respond. “We can expect storm activity like this to continue into the future, and so we need to plan how we manage landscapes so biodiversity will persist,” Watson says. 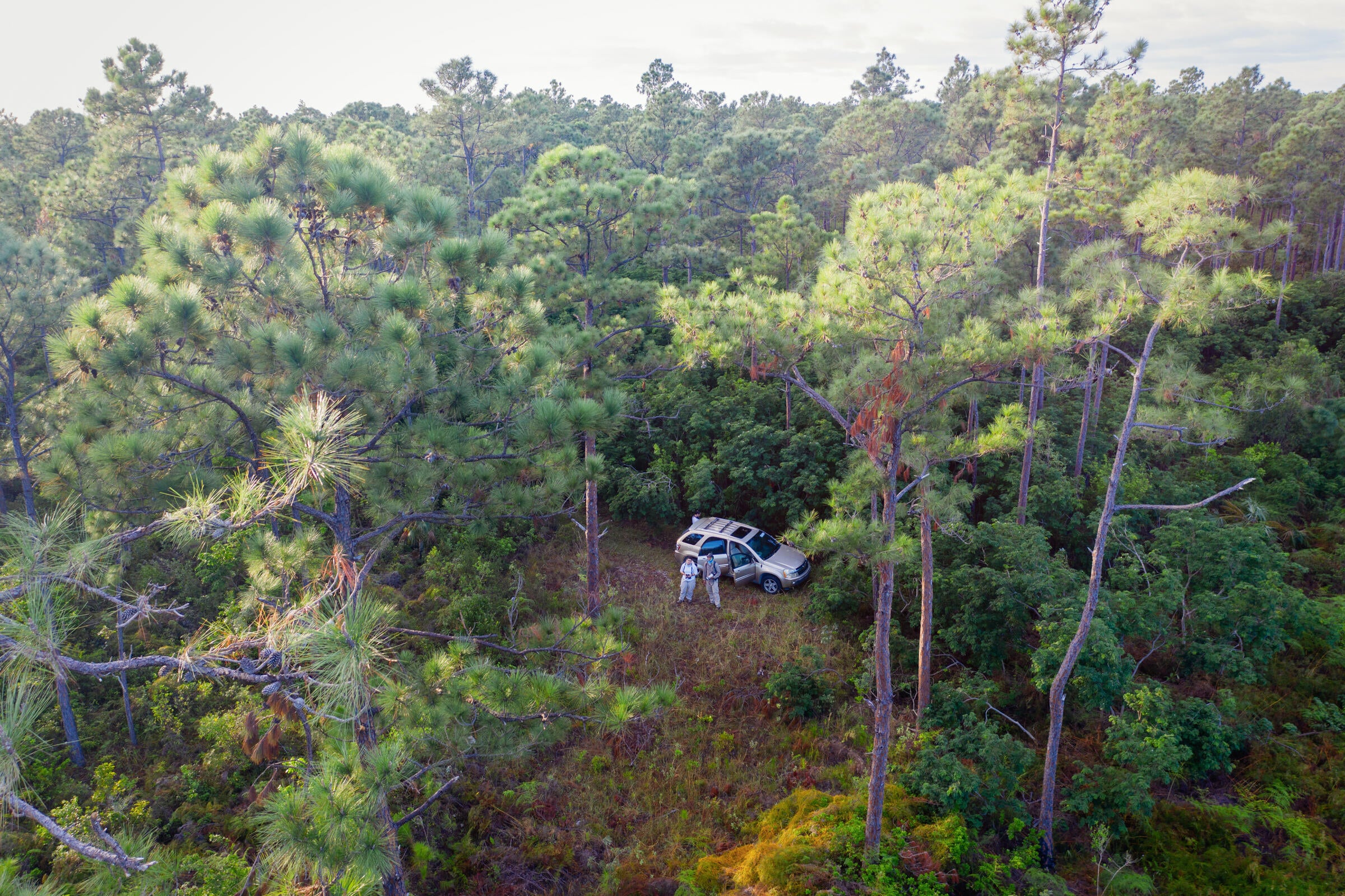 The storm destroyed BNT’s office on Abaco and it took a month to secure safe housing, a working vehicle, and to align everyone’s schedules to make the survey possible. Once on Abaco, the surveyors zig-zagged across key avian habitat, tallying endemic birds, recently arrived migrants, and food resources such as native plants, fruits, and seeds.

Of particular concern was the Bahama Parrot, also known as the Abaco Parrot, a once-common bird now found mostly on just two isles. Since the late 1980s its population numbers had rebounded, thanks partly to BNT’s efforts to control predators and protect habitat, and now its adorable green-and-red likeness appears as an island mascot on logos, signs, and T-shirts. Stahala witnessed some of the parrots eating from the ground like chickens—concerning behavior, as it indicates serious food stress. But she said she was glad to see the island’s southern pine forests, where parrots breed, remained largely intact.

Though it was still too early to measure the storm’s overall impact on bird populations, the team saw other promising signs as well: Although they didn’t encounter high numbers of most birds, they did spot expected species such as Bahama Mockingbirds, Smooth-billed Anis, and Bahama Woodstars. Shorebirds, including threatened Piping Plovers that had begun arriving to their wintering grounds, also seemed undisturbed.

It was also promising to see Abacoans’ response to the birds’ plight, even amongst the destruction and hardship. Before the survey team arrived, Watson worried islanders wouldn’t take kindly to a group of scientists focusing on birds given the ongoing humanitarian crisis. But when they visited communities wrecked by the storm, he was amazed to find people welcomed them, grateful someone was looking out for their parrot in these hard times. Even before their arrival, Knowles was receiving calls from fellow Abacoans with parrot sightings.

In coming years, scientists and park managers will fortify habitat across the island, managing fires that can spread with downed trees, working with residents to keep standing ones in place, and watching out for an influx of invasive plants, feral cats, and other hungry predators that can move in after a disturbance. They’ll keep an eye out for saltwater contamination of the groundwater that could kill swaths of the pine forests the parrots and many other species need and plan to restore leveled sand dunes on Grand Bahama island, says Shelley Cant-Woodside, BNT’s director of science and policy. 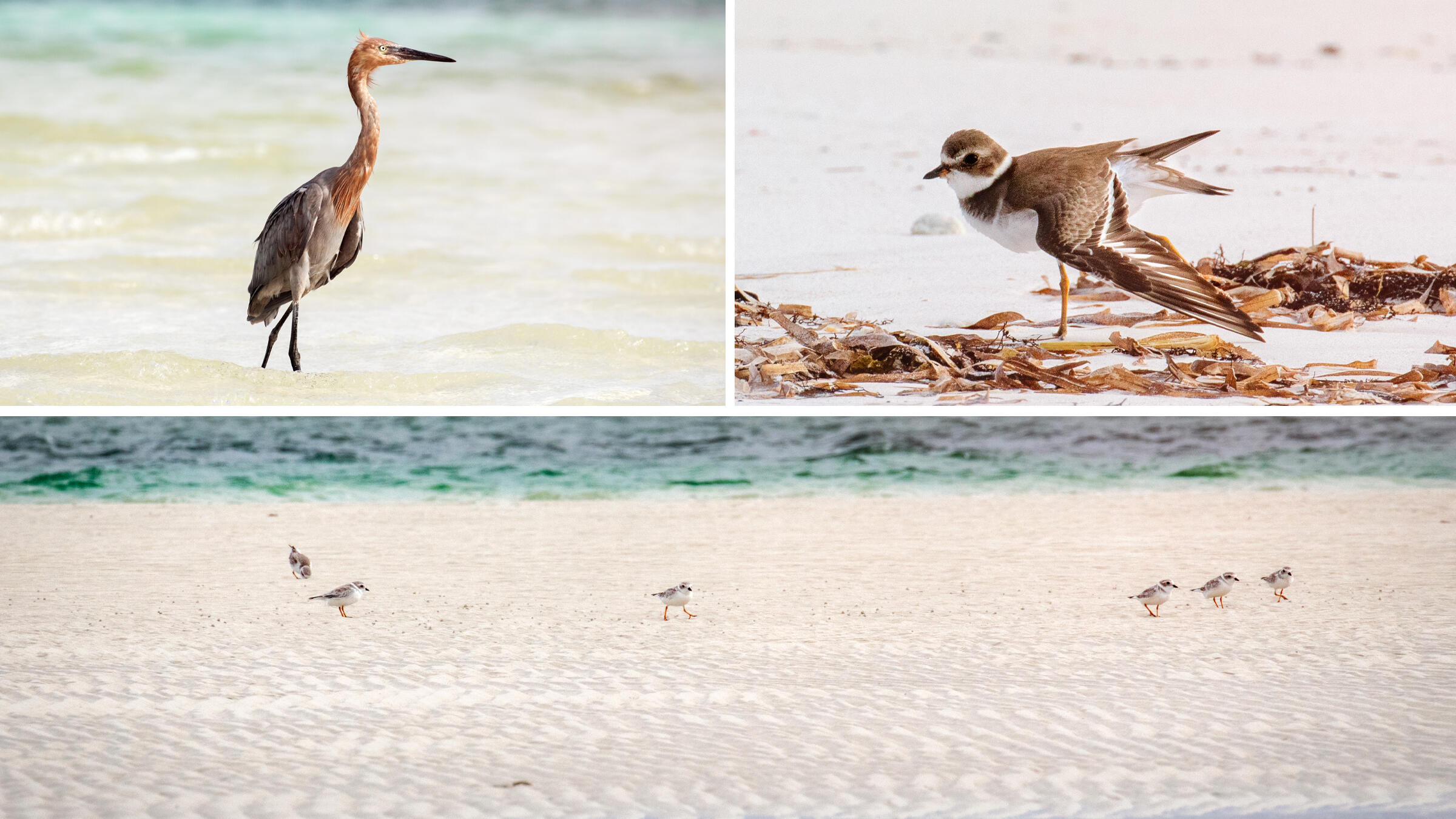 If they can secure sufficient funding, they’ll also aim to conduct similar surveys on Grand Bahama Island and follow-up surveys on Abaco. Next spring, they’ll look for surviving Bahama Nuthatches, hoping to spot an elusive individual or even more miraculously, a courting pair. As after Hurricane Matthew, experts fear its extinction; whether it survived may once more take years to answer.

It’s the kind of question these low-lying islands will face again and again. BNT researchers are studying challenges from rising seas, stronger storms, and drier, hotter summers in real time, using what they learn to safeguard forests, combat destructive development, and restore shorelines. Proactive habitat protections are, ultimately, the best way to ensure post-storm resilience, according to U.S. Forest Service emeritus scientist Joseph Wunderle, who has studied hurricane aftermath and its effect on birds.

Knowles, for his part, has already been rebuilding his own life on Abaco. Another big storm will come, but he says it’s his duty to continue overseeing parks and wildlife for his fellow Bahamians. They are not giving up on this place—or the parrots they call their neighbors.

This story originally ran in the Winter 2019 issue as “Rapid Response.” To receive our print magazine, become a member by making a donation today.​