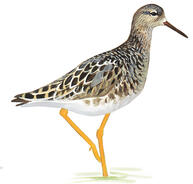 Question: Why do some birds have such extreme mating rituals?

Kenn Kaufman: For birds, as for humans, courtship can be an all-consuming focus at certain times, but birds are even more driven by instinct than we are.

In birds, “mating rituals” include two very different categories. One involves ritualized behaviors between members of a mated pair. For example, albatrosses may mate for life, and members of a pair may be apart for months at sea. When they meet again at the nest site, they go through elaborate displays of strutting, bowing, and bill clapping. These rituals are important in reaffirming the pair bond, and I might write about them some more in a future column.

Right now, however, I’m going to focus on the other category. It involves bird species that don’t pair up for any length of time; instead, males (it’s almost always the males) put on remarkable courtship displays to try to win the attention of as many females as possible.

Only a minority of bird species engage in such behavior. A more typical pattern is what we observe in many kinds of migratory songbirds, such as the American Robin. The male arrives on the breeding grounds first and establishes a territory, driving away other males and advertising his claim to his turf by singing. The female arrives later, and she gets to choose her mate. Although we can’t know what’s going on in birds’ minds, the female’s (instinctive) choice of her mate is probably influenced by the quality of the territory he holds. Is it good habitat, with plenty of shelter, and food enough for the pair and their offspring? She may also assess whether the male is vigorous and fit, with a good song—although if he didn’t have these qualities, he probably couldn’t hold on to the best territory anyway. So the female makes her choice, the two birds pair up, and together (with varying degrees of involvement by the male) they raise their young. In the process of pairing up, they may go through various displays and rituals, but they’re usually not conspicuous.

No, the truly outlandish, bizarre courtship displays are observed in species in which the birds do not form pairs. In these, the males’ whole focus is on attracting females—ideally, as many as possible—and they may go to extremes in that effort.

Consider the Greater Prairie-Chicken of North American grasslands. Beginning in early spring and continuing for weeks, up to 20 or more males gather at dawn every day on a patch of open ground called a “booming ground,” or “lek,” to perform elaborate courtship dances. Crouching down while raising their tails and tall feather tufts, inflating yellow-orange air sacs on their necks, they go quick-stepping around while making loud moaning noises, stopping frequently to spar with each other. Females from the surrounding area visit the lek to check out the males. They may visit multiple leks and spend considerable time observing before they select one male and mate with him. Then they go off on their own to lay eggs and raise a brood. The males take no part in parenting; they go on dancing, trying to attract more females.

Similar lek displays are performed by other relatives of the prairie-chickens, including Sharp-tailed Grouse and Greater Sage-Grouse, and by various unrelated birds living in open country in the Old World. In the Ruff, a type of sandpiper, not only do the males gather in a lek in spring, they also sport tufts of feathers of wildly varied patterns of black, white, and reddish brown, seemingly no two alike. Flaring their colorful tufts, the Ruffs crouch, stretch, leap in the air, bow, and dash about.

The male Great Bustard, a huge turkey-like bird living on open plains of Europe and Asia, displays by puffing up his body to an absurd degree. Raising and flaring the white feathers under his wings and tail, he then struts about, looking like a gigantic, partially burned marshmallow. Males start off displaying in flocks and later may spread out over a large area, so females have to wander some distance to compare all their options. This kind of dispersed display area, called an “exploded lek,” seems to be the rule for several other species of bustards.

But this kind of behavior doesn’t just occur in open country—it’s also found in dense tropical forest. On lower slopes of the Andes in South America, the Andean Cock-of-the-Rock displays in the dense understory at dawn. The male is spectacular even when he’s sitting still: the size of a football, and flaming red-orange with black-and-silver wings. But on the lek, several males will puff themselves up, flap their wings, and hop from branch to branch while making loud twanging noises. When a female shows up, the activity of the males revs up to a frenzy as they vie for her attention.

Much smaller but no less colorful are the manakins. About 50 species of these tiny, brightly hued birds live in forests of Central and South America. Males of most species put on remarkable, fast-paced dances, often accompanied by snapping or buzzing sounds produced by their wings, to attract females. They may form leks of several males on the same arena, or several may display individually in the same general area. In some species, such as the Lance-tailed Manakin, two males will perform together, in an intricate, coordinated dance that doubles the impact.

Around the world from the cocks-of-the-rock and the manakins, the birds-of-paradise in the tropical forests of New Guinea offer the ultimate examples of extreme displays. Males of most species are almost unbelievably ornate, with brilliant colors and long decorative feathers, and they make full use of these features in their courtship dances. In the Greater Bird-of-Paradise, males have long, flowing, white plumes. Several males gather in high, bare branches and make raucous calls as they bow deeply, flare their plumes, flutter their wings and hop about frantically. The male King Bird-of-Paradise is bright crimson and white, with a very short tail except for two very long wiry filaments ending in round tufts. He displays by dancing, swinging his odd tail around, and hanging upside down. The male Superb Bird-of-Paradise flares his feathers to convert himself into a black oval with a neon-blue smiley face pattern, and bounces around on logs. A video sequence of several species of birds-of-paradise (below), from David Attenborough’s Planet Earth series, has been viewed on the BBC Earth YouTube channel more than 5 million times.

In all of these cases, the evolution of these astonishing courtship performances by male birds seems to have been driven by the same thing: the choices made by female birds.

To see how it works, consider those Greater Prairie-Chickens again. Numerous studies have found that most of the females visiting the lek will wind up mating with the same few males. The females all seem to respond to whatever it is that makes a male prairie-chicken attractive, whether that is his dance moves, his position within the lek, his dominance of other males, or more likely a combination of factors. So evolution puts the males into extreme competition with each other. Those that excel at courtship will be the ones that pass their genes along. Whatever the traits are that make them successful at the mating game, those traits will be handed down, genetically, to the following generations.

Similar things probably happen with all the other species practicing extreme courtship displays. Evolution favors those traits that lead to the most offspring, so for these birds, it would favor the males that mate with the most females. If female manakins are most attracted to the males that dance the fastest, for example, then the genes for fast dancing will be passed along, and that ability may be enhanced in later generations. If female birds-of-paradise are most attracted to males with absurdly long plumes, evolution will favor the tendency to longer plumes. Presumably the preferences of the females are passed along genetically to their female offspring, also, and the whole cycle becomes self-perpetuating from one generation to the next.

This is an extremely oversimplified explanation (and geneticists, in particular, will probably cringe at seeing it in such simplistic terms), but something along these lines is operating in the development of these wild courtship antics.

Think about how different this is from the situation of the majority of birds. Consider a male American Robin. For him to have the best chance of passing along his genetic material, he must defend the territory and then help feed the young after the eggs hatch. He can’t just sing all day and hope to attract more and more females. For robins, evolution favors male traits of good parenting.

So the most remarkable courtship displays develop in species that don’t form monogamous pairs. Males can spend the season dancing and performing only if it’s feasible for females to raise young by themselves, and that’s the case with all the examples I’ve mentioned here. Among the grouse, bustards, and the Ruff, the young are precocial, able to run around and feed themselves as soon as they hatch. Manakins feed mostly on small fruits and they live in tropical forests where fruits are abundant, so it’s not a challenge for the female to feed both herself and her young. Birds-of-paradise may eat both fruits and insects, and the female generally lays only one or two eggs in a clutch, so she can handle finding enough food for her nestlings.

But after all this, I haven’t answered the original question: Why? I’ve described some factors that make these courtship behaviors possible, but why do they start to develop in the first place?

We don’t know. These behaviors aren’t even consistent across families. The Ruff—in which males have striking displays and take no part in raising young—is closely related to other sandpipers in which males take a full share of incubating the eggs and tending to the hatchlings. A few species of birds-of-paradise, like the Trumpet Manucode, form monogamous pairs, and males take part in incubating the eggs and feeding the young. These males are less colorful, with less elaborate displays, than the extreme members of the family. But why? What makes a species start off down an evolutionary road that will eventually lead to an outrageously plumed, colorful bird contorting and dancing in the forest? We may not know the answers to that kind of question for a long time.